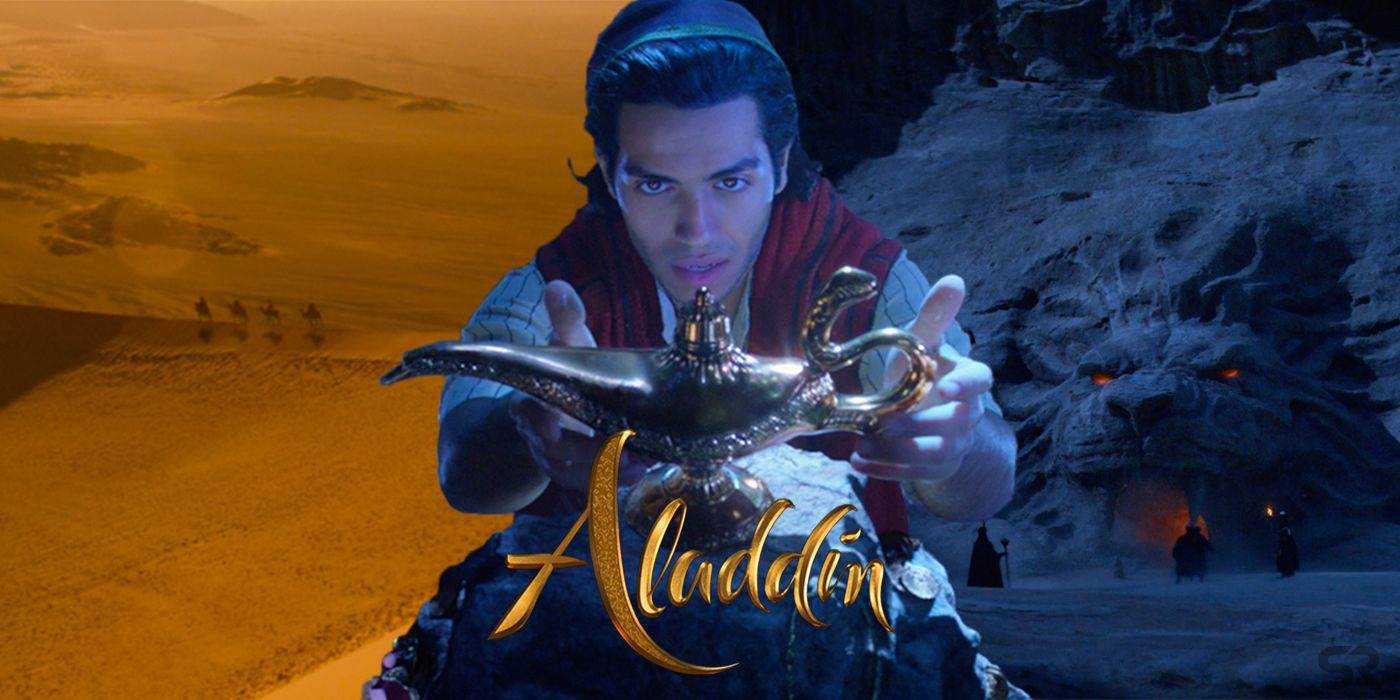 The first teaser trailer for Disney's Aladdin has finally broken free from the Cave of Wonders, with some key moments inspired by the animated source material to break down. Following the trend of other live-action Disney adaptations, like Beauty and the Beast and Dumbo, the "tease" in "teaser trailer" is not taken lightly, and viewers are given just a taste of what's to come in director Guy Ritchie's upcoming fantasy adventure.

Following a "less is more" approach, Aladdin's teaser trailer briefly showcases some of the original movie's most classic moments, but leaves out some major scenes, set pieces, and characters. The most notable exemption - given that Will Smith personally announced the release of the trailer himself - is the Genie (though there is a sample of his first musical number, "Friend Like Me" during a brief text transition towards the end). Other characters like Jasmine (played by Naomi Scott), Carpet, and Jafar (played by Marwan Kenzari, whose silhouette appears briefly in one passing shot) are left out.

Interestingly, the connecting thread throughout each scene in the teaser trailer is the parrot Iago - Jafar's loudmouth sidekick. The bird soars through major landmarks featured in the original Disney animated movie, and this breakdown will paint a clearer picture for audiences who might need a refresher on the source material. 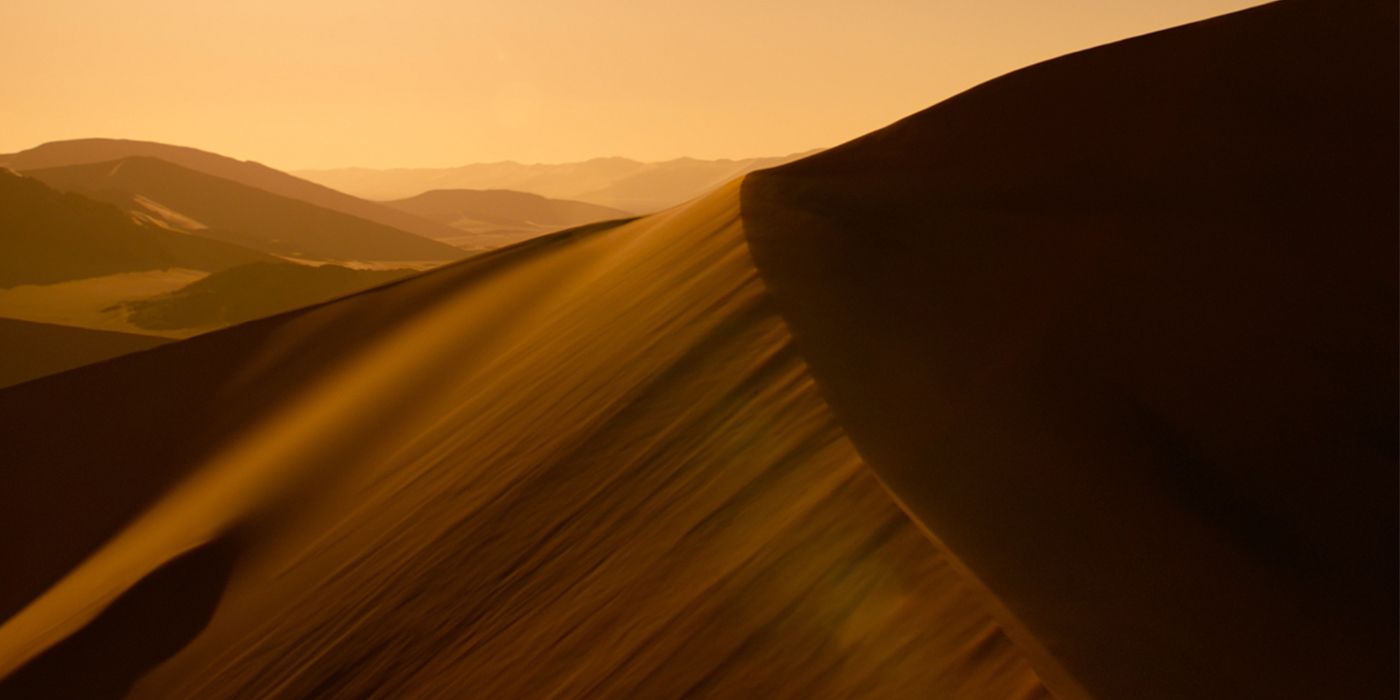 7. Jafar In The Desert 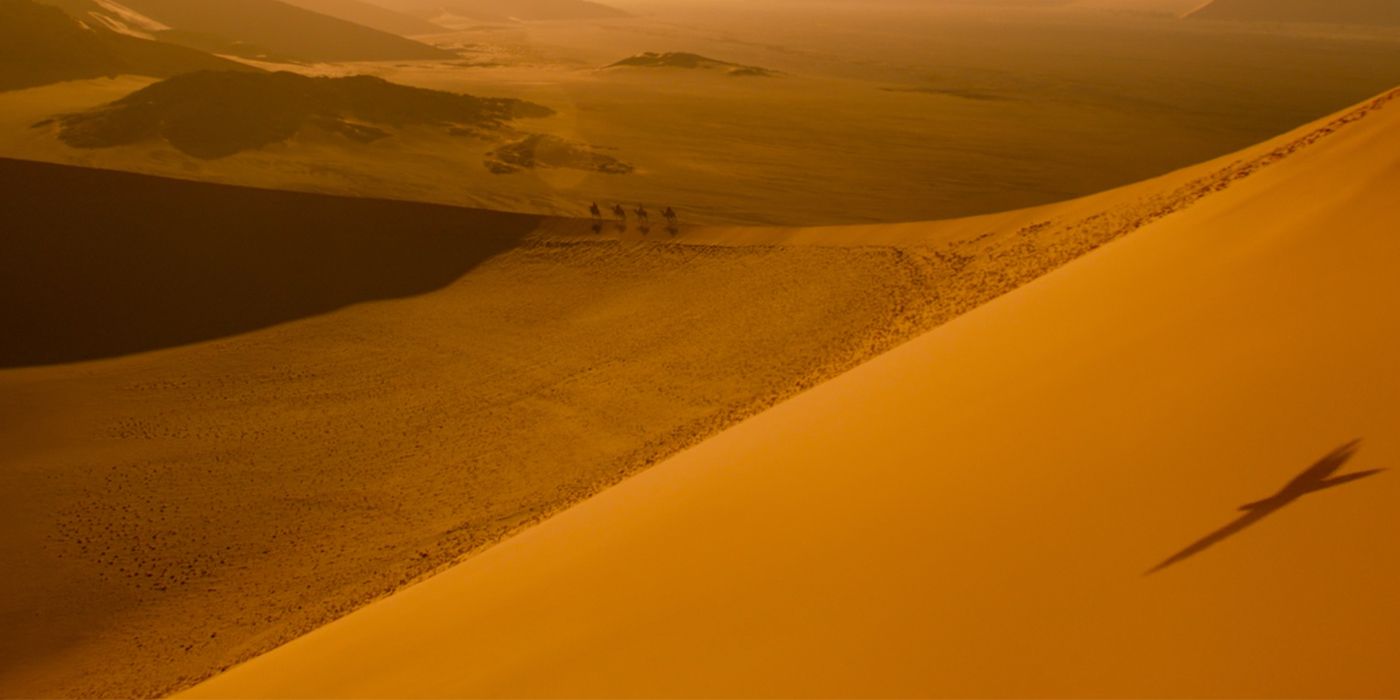 The opening shot of the teaser trailer pushes in over the massive dune to reveal a quartet of travelers. All riding on camels, it's impossible to tell who is who, though it's possible - given the direction the trailer ends up taking - that at least two of them are Aladdin and Jafar. Just to the right is a silhouette of the parrot Iago. This may well be a moment during their journey to the Cave of Wonders, after Aladdin is imprisoned. Whether or not Jafar dons a disguise as an old man in this live-action version, however, remains to be seen.

6. The Sultan's Palace in Agrabah 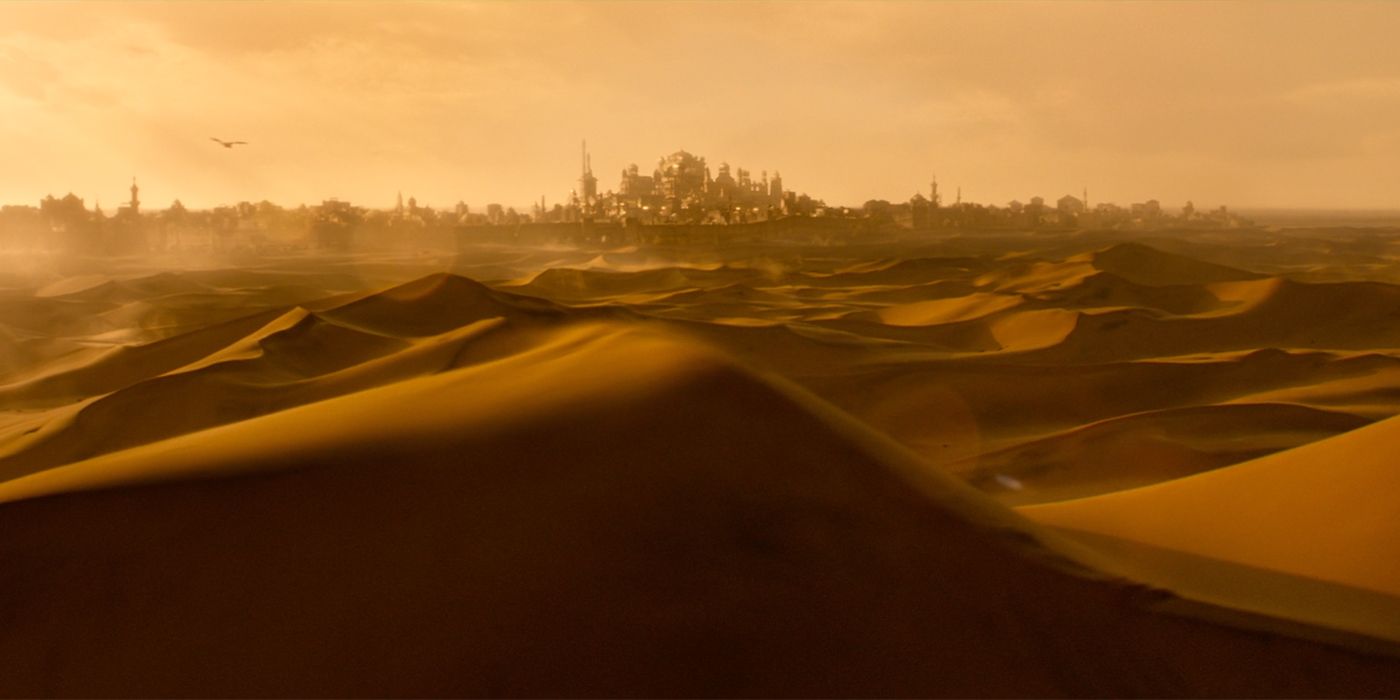 Iago is then seen soaring over another desert landscape - this time just outside Agrabah's city walls. In the background, however, just beyond the sweltering sun haze, is the Sultan's Palace. This is where the Sultan (played by Navid Negahban), his daughter Jasmine, and her pet tiger Rajah reside and rule, and where Jafar, the Grand Vizier of Agrabah, and Iago also live. In the original animated movie, the Palace looks like a desert paradise; though its live-action counterpart, however, seems considerably less inviting. 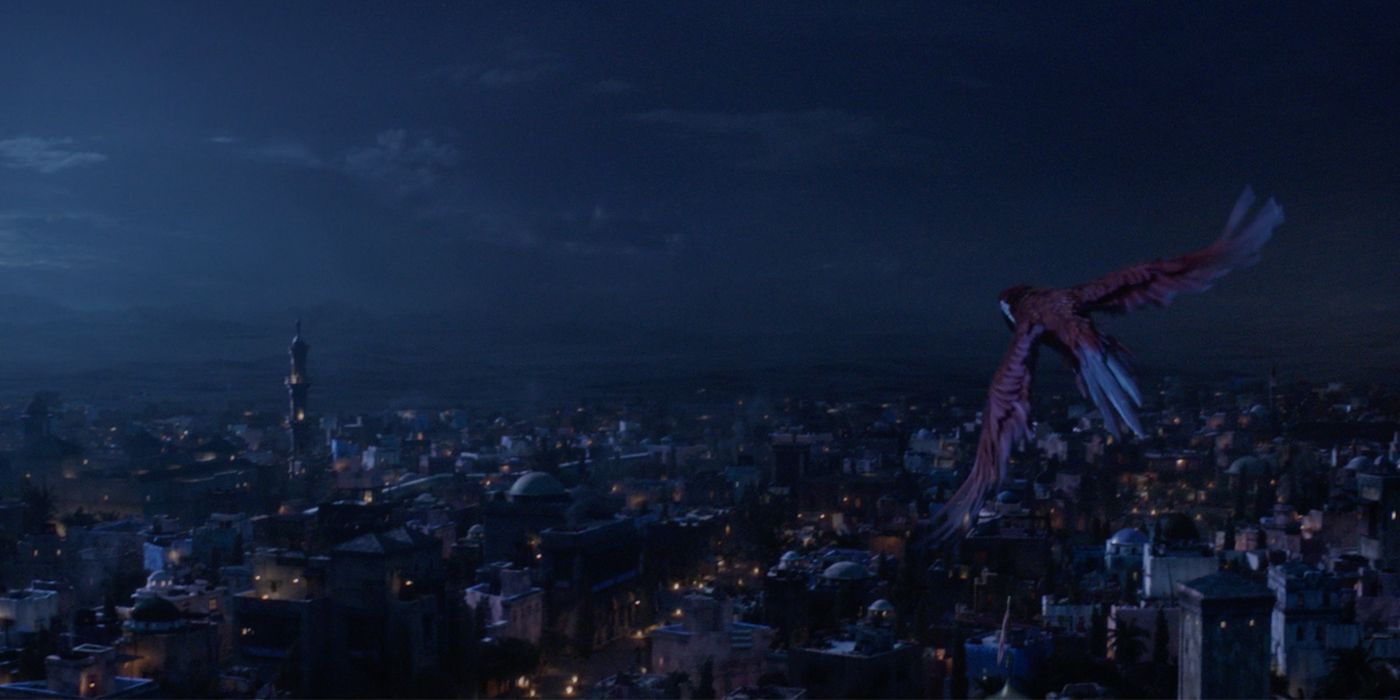 Moving deeper into civilization, Iago is next seen soaring right over Agrabah's city streets. The sun is set, and there are no telltale signs relating whatever this scene might revolve around with a scene from the original animated movie. That said, it's possible that Jafar may have sent Iago to scout out a potential contender for someone worthy enough to enter the Cave of Wonders and retrieve the magic lamp - a "diamond in the rough," as the original movie puts it. This shot also serves as a transition into the next shot, which is miles - if not days - away from Agrabah.

Page 2: Agrabah's City Streets, the Cave of Wonders, and the Lamp 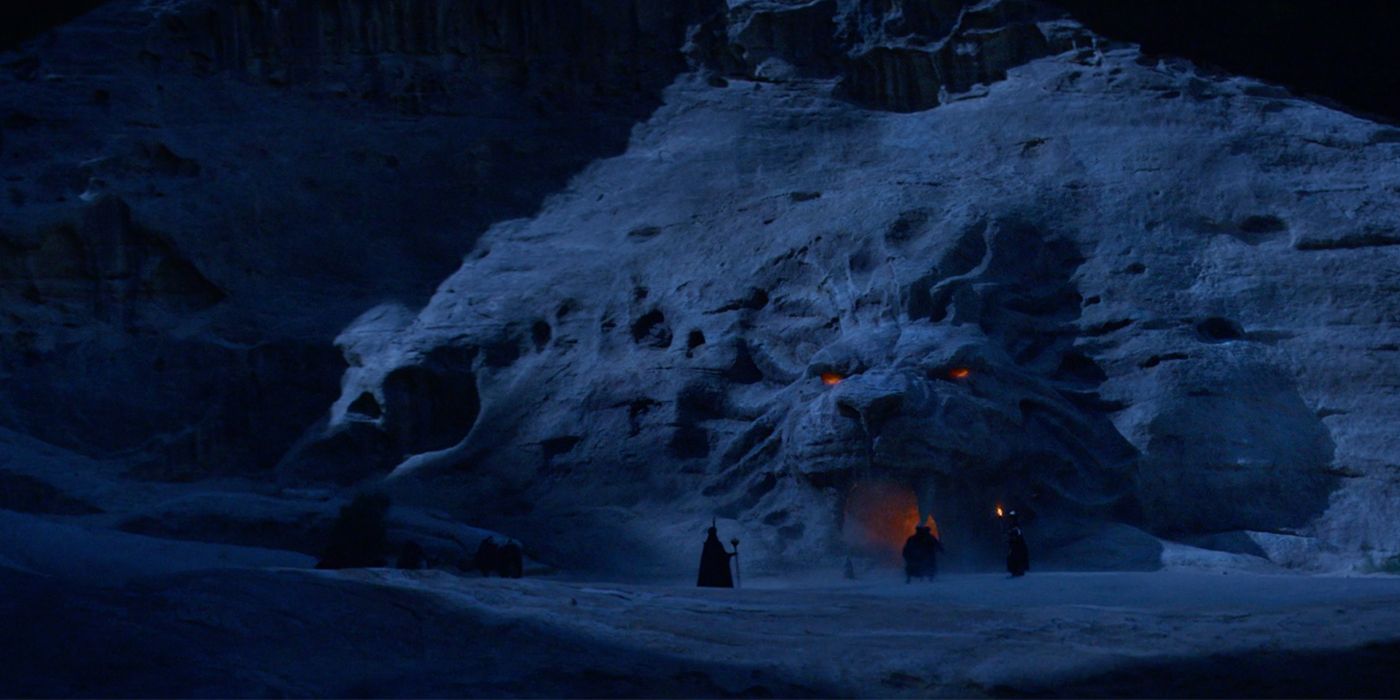 4. The Cave of Wonders

Iago's travels finally hand off the focus to the movie's titular hero, Aladdin, but not before introducing one of the movie's many impressive landmarks: the Cave of Wonders. At this point, the cave's tiger head (though here, it looks considerably more like a lion) has already been awoken/activated, and it relays its infamous warning, "Only one may enter here; one who's worth lies far within." This shot also offers the first look at Jafar, though only from behind and as a silhouette. The feather on his headpiece, as well as his snake staff, are the major giveaways. He's joined by two other characters, though their identities are unknown.

3. Aladdin Entering the Cave of Wonders 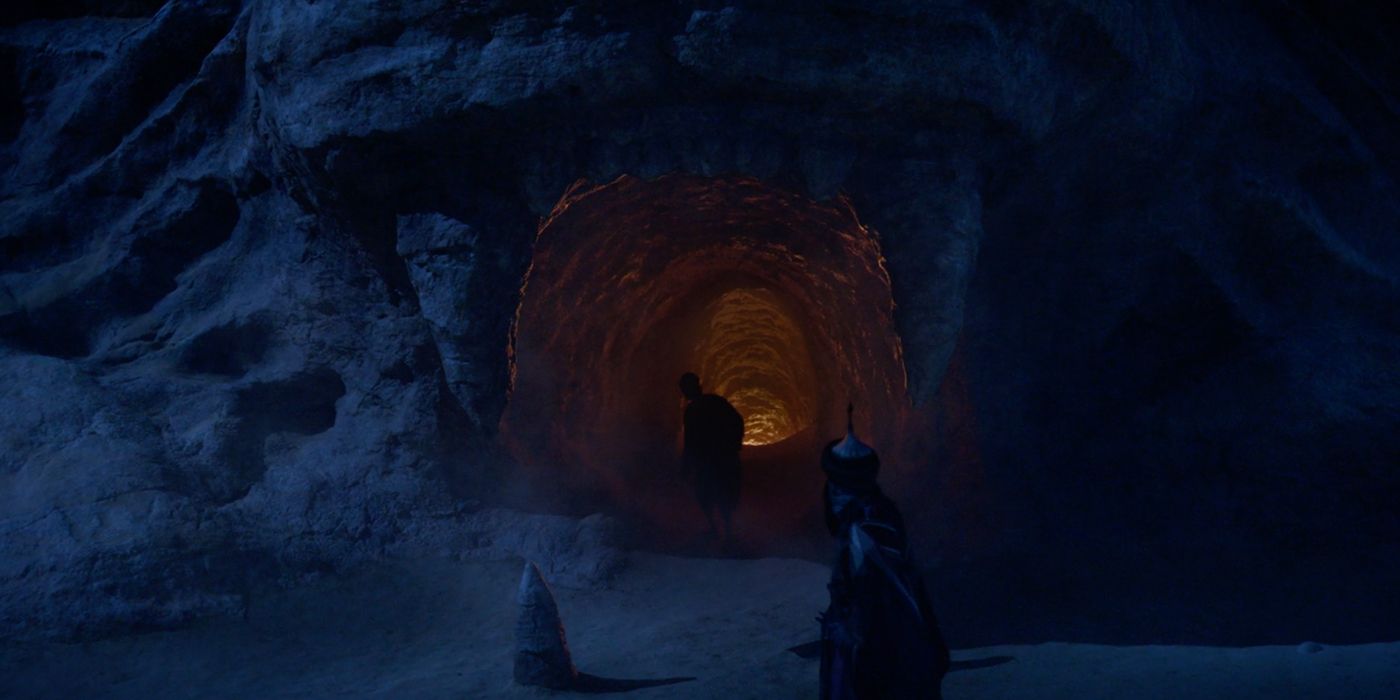 Diving straight into the action, Aladdin (also seen from behind and as a silhouette) is willingly entering the Cave of Wonders. He appears to be slightly apprehensive, which is understandable given the circumstances, and the cave finishes its warning seconds after closing its mouth shut on top of Aladdin and trapping him inside. It says, referring to a character who may or may not be Aladdin himself, "The diamond in the rough."

As for the guard standing behind Aladdin and watching him enter the cave, it's possible that this might be one of the palace guards named Hakim (played by Numan Acar), who appears in the original animated movie.

Related: All The Live-Action Disney Remakes In Development

2. Inside the Cave of Wonders 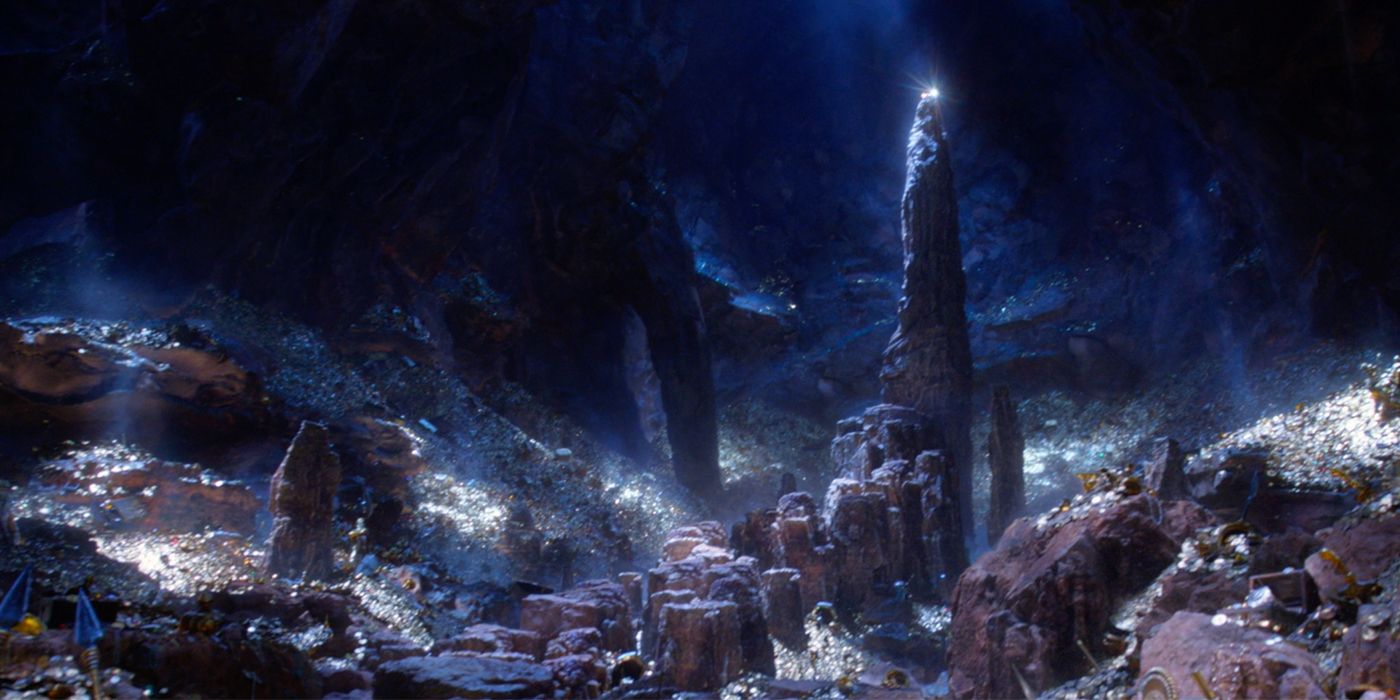 The first shot of the treasures inside the Cave of Wonders doesn't just honor the look of the original animated movie, but also cues in some new music - this time an instrumental piece from the song "Friend Like Me." Though there doesn't appear to be a shot of the magic carpet, which Aladdin ultimately befriends, the magic lamp is visible in the distance. In fact, a glint of light is reflecting off its surface, as if to summon Aladdin forward (which turns out to be a success). 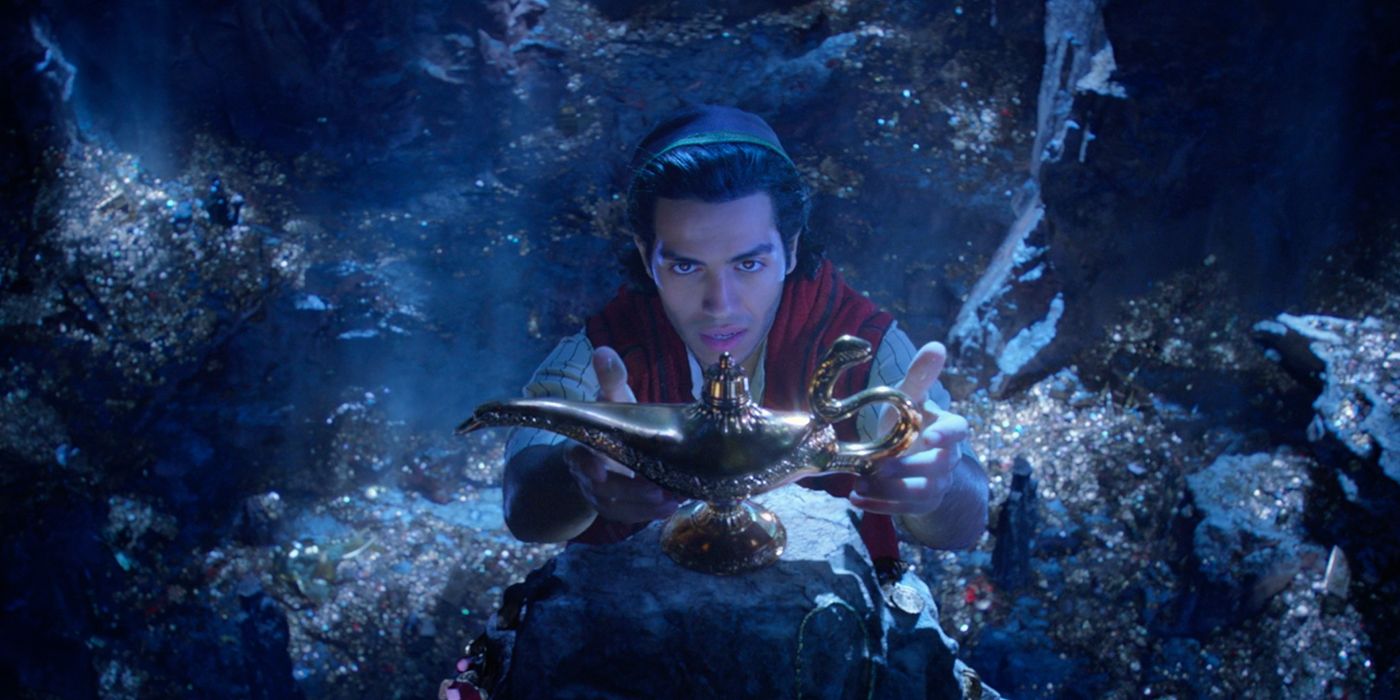 The final shot of the teaser trailer doesn't leave much to the imagination, as Aladdin is seen taking the magic lamp from its pedestal, per instructions from Jafar. The scene cuts away before audiences get a chance to see what follows, but in the animated movie, this is the moment in which Aladdin's pet monkey Abu simultaneously breaks the one rule they were given: touching anything other than the lamp. Abu is tempted by a giant ruby, and ultimately touches it, only to summon the wrath of the cave. And, though the trailer doesn't appear to show Abu (it's still unclear whether or not the monkey will appear in the movie at all), there is something bright and red just below Aladdin's elbow on the right side of the frame, which may be that very ruby.

This entry was posted by Screen Rant on October 12, 2018 at 5:10 am, and is filed under TV News. Follow any responses to this post through RSS 2.0. You can skip to the end and leave a response. Pinging is currently not allowed.