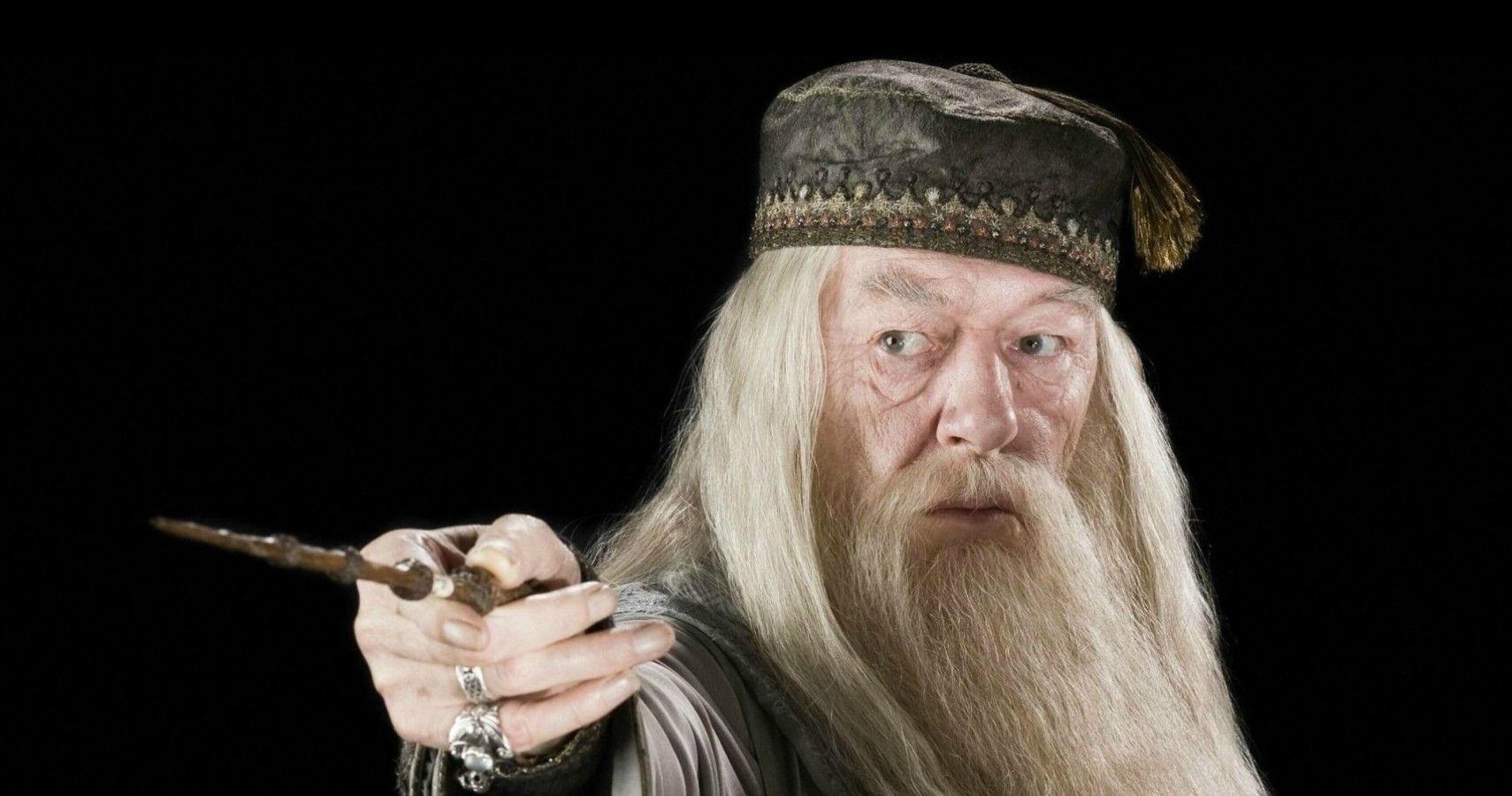 There's more to love in the world of Harry Potter than just the magic and the whimsy. The story itself is captivating; seeing all of the subplots and details fit together nice and neatly is like a literary jigsaw puzzle. It's just one of the many reasons to love the series. But a big part of what makes Harry Potter so memorable is the characters, especially Albus Dumbledore.

The headmaster of Hogwarts School of Witchcraft and Wizardry; the Chief Warlock of the Wizengamot; discoverer of the Twelve Uses of Dragon's Blood; beholder of three middle names... Dumbledore is an intriguing guy all around, but is he as perfect as we'd all like to believe? Here are 10 reasons why Dumbledore was a not-so-nice person.

10. He employed Professor Quirrell While hiding the Sorcerer's Stone At Hogwarts

So, this Dumbledore fella. He's pretty smart, isn't he? But, hey, if he knows everything all the time, why did he hire Professor Quirrell, a guy who very much shares a head with Voldemort? Shouldn't the all-knowing Headmaster of Hogwarts have realized there was something off about that guy? Even Snape knew Quirrell was shady!

Even if we assume Dumbledore did know what Quirrell was doing (and then hired him knowing all along what was going on), then why in the world did he choose to keep the Sorcerer's Stone at Hogwarts? It's almost like Dumbledore was trying to keep Voldemort alive... like he was trying to ensure he would rise to power again.

RELATED: Fantastic Beasts Should Be About Jude Law's Dumbledore, Not Newt

9. He uses The Time-Turner To Save Sirius And Buckbeak, But No One Else

Don't get us wrong, we were cheering in The Prisoner of Azkaban when Dumbledore told Harry and Hermione to use Hermione's Time-Turner to save Sirius Black and Buckbeak — two innocent lives so wrongly condemned. But how come Dumbledore didn't hang onto the Time-Turner and use it to save other people?

Furthermore, why didn't Dumbledore have Harry and Hermione go back in time to make sure Professor Lupin drank his werewolf potion that night, which would have prevented Peter Pettigrew from escaping and eventually helping Voldemort rise to power? Why wasn't the Time-Turner used to save the Potters—or later on in the series—to save the lives of dozens of other beloved characters?

RELATED: 10 Of The Sassiest Quotes From Harry Potter, Himself

8. He Let Dementors In Hogwarts Without Teaching Students How To Cast A Patronus

It's book three and Sirius Black has escaped from wizard prison and is headed to Hogwarts to kill Harry... At least that's what we're lead to believe. In an effort to ramp up security, Dumbledore allows Dementors to patrol the Hogwarts grounds. Sounds like a good idea, right? Wrong!

Dumbledore allowed these hooded, creepy creatures to wander around the school, hungry for some serious soul-sucking. They had free and easy access to a school full of innocent children with no way of protecting themselves. Sheesh, Dumbledore! The least you could've done was teach your students how to cast a Patronus!

In The Order of the Phoenix, Dumbledore realizes that Voldemort is using Harry as a sort of two-way mirror. So to convince the Dark Lord that he and Harry aren't close, Dumbledore ignores Harry completely. After Harry has a vision in which he sees Voldemort's snake, Nagini, attacking Mr. Weasley, Dumbledore's suspicions are confirmed. He then orders Harry to begin Occlumency lessons with Snape. It doesn't go well; Harry doesn't learn enough to protect himself and Snape soon calls the lessons off.

This proves to be a mistake when Harry has another vision — this time, of Voldemort torturing Sirius Black. Harry takes the bait and Sirius loses his life. Dumbledore later regrets having not taught Harry Occlumency himself. If he had, Harry might've successfully been able to block Voldemort's mind-control, and Sirius Black might never have died.

RELATED: Harry Potter: The 15 Strongest (And 10 Most Worthless) Death Eaters

6. He Kept Kids In School When The Chamber Of Secrets Had Been Opened

After a fifth kid turns up petrified, the teachers enact a curfew and escort students to their classes, but why didn't they take these safety measures after the second kid was found? Why were the kids made to stay in school when it obviously wasn't safe for them to be there?

5. He Gave Slytherin's House Cup To Gryffindor Instead

At the end of year feast in The Sorcerer's Stone, all the kids in Gryffindor are bummed because it looks like Slytherin won the House Cup. But before Slytherin gets what's rightfully theirs, Dumbledore swoops in with a last-minute award ceremony, which allows Gryffindor to win the House Cup in a come-from-behind victory.

Maybe Dumbledore wasn't wrong to do this since Harry, Ron, Hermione, and Neville all won those extra points fair and square. But Dumbledore had plenty of time to award those points before the ceremony, yet instead, he waited until no other house could possibly win any more points. When he did the math, he gave Gryffindor the exact number of points they needed to win. For Dumbledore to award the points at the House Cup ceremony, to deliberately rip the rug out from under all those little kids in Slytherin... It just seems uncalled for.

4. He Let Snape Be A Jerk To The Students — Especially Harry

Love him or hate him, there's no denying it: Snape was a jerk to his students, particularly Harry. Snape's dislike of Harry is no secret; he says mean things to Harry in front of Dumbledore on numerous occasions, and when Harry points this out to Dumbledore, Dumbledore explains that Snape didn't like Harry's father, James. Instead of letting it go and coming to terms with the fact that sometimes kids are little snots, Snape chose to nurse that grudge for a decade and then project his anger onto his old school bully's son.

Snape is totally to blame for his poor treatment of Harry, but Dumbledore knew about it and just let it happen. That's not exactly the mark of a good headmaster.

RELATED: The Wands Of Each Harry Potter Character

3. He Forced Harry To Compete In The Triwizard Tournament

In the fourth installment of the series, Harry's name somehow ends up in the Goblet of Fire and he's chosen as a champion in the Triwizard Tournament. Dumbledore argues that Harry must compete because once the Goblet of Fire picks the names of the champions, it's a binding contract. However, it's obvious that somebody other than Harry put his name in the cup, so it shouldn't be binding at all.

Instead of investigating or letting Harry off the hook, Dumbledore does nothing, which means two things. For starters, in the Wizarding World, anyone can sign anybody else up for competitions, and that person is legally required to do something they never agreed to do in the first place. Lastly, Dumbledore's decision-making skills could use a little work.

2. He Was Friends With Grindelwald

Everybody has a past. We've all done things we're not proud of. When it comes to Dumbledore's backstory, we're willing to let bygones be bygones, but what if he's not? Dumbledore was once friends with the Dark Wizard Grindelwald—a topic which is explored a bit more in the Fantastic Beasts and Where to Find Them franchise. His friendship with Grindelwald caused him to adopt some prejudiced beliefs, like the idea that magical people are superior to muggles.

In Harry Potter, it's clear that Dumbledore no longer holds those beliefs, but it does almost seem like Dumbledore is using Harry to take down Voldemort in an effort to ease his own conscience. Dumbledore can't undo what he did in the past, but he can raise this little orphan boy up as a soldier to defeat another dark wizard. Maybe we could forgive Dumbledore for his infatuation with Grindelwald, but it's hard to overlook the way he tried to fix his past mistakes.

RELATED: Theory: Dumbledore Was Lying About Grindelwald All Along

Obviously, Dumbledore cared for Harry, but that doesn't negate the fact that he also used Harry as a tool. Dumbledore knew Harry was another one of Voldemort's Horcruxes, and he knew that meant Harry would have to "die." Yet, instead of telling Harry the truth and trusting Harry to make the right decision, he kept the secret from him until he'd pretty much forced Harry's hand. Harry had no other option.

NEXT: 10 Weirdest Things That Became Harry Potter Canon Thanks To 'The Cursed Child'