10 Horror Movies That Are Based On True Stories 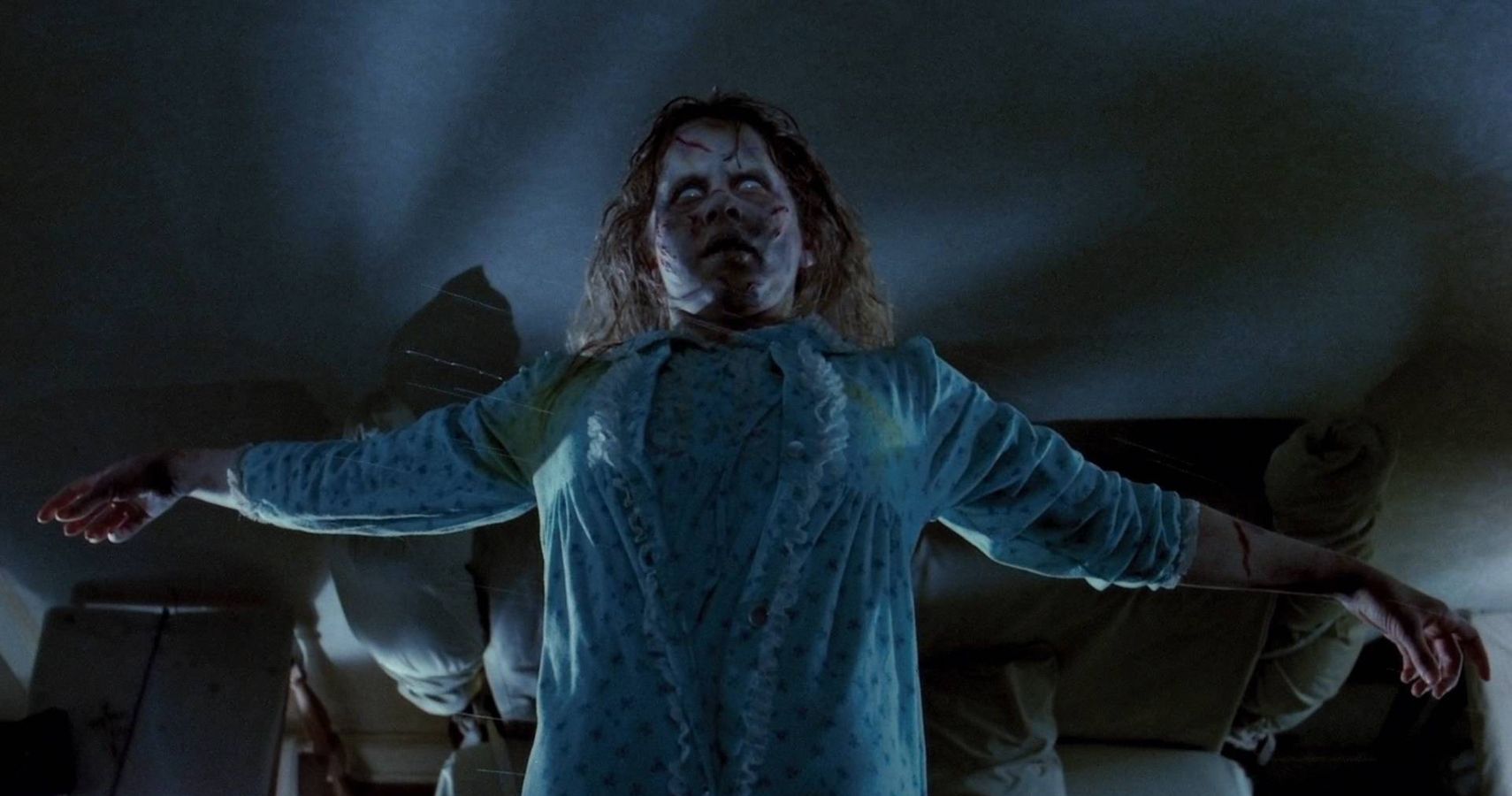 The only thing scarier than a good horror movie is one that is actually based on something that happened in real life. It's easy to watch a movie about a vampire, werewolf, or giant fire-breathing lizard because it is clear that those are fantastical creatures that deliver no fear outside of the movie theater. However, deliver a movie about a haunting or a horrific event that is based on something that really happened and moviegoers might spend extra time looking over their shoulders...

While many fans may doubt the legitimacy of some of the real events behind these movies, some facts that are set in stone. There are other movies that are based on real-life events but the filmmakers took liberties with the stories to make them a little more entertaining — or disturbing, if you will. Here is a look at 10 of the best horror movies based on true stories.

William Peter Blatty wrote the novel The Exorcist in 1971 about a 12-year-old girl named Regan and two priests that tried to exorcize a demon from her body. He then adapted the novel into a screenplay and the movie hit theaters in 1973 — picking up an Oscar nomination for Best Picture and standing the test of time as one of the best horror movies of all-time.

This was also a horror movie based on a true story, or at least a version of a true story. The movie pulled actual events from a 1949 exorcism of a young boy in Maryland by three men: two priests and an associate of College Church. The exorcism worked and the boy went on to live a normal life.

RELATED: 30 Crazy Details Behind The Making Of The Exorcist

Released in 2003, the horror movie Open Water told the story of a couple who went scuba diving in the Caribbean when their boat accidentally left them behind in shark-infested waters. What is frightening is that this horror movie was based on a true story that happened in 1998 to Tom and Eileen Lonergan.

While Jaws made many people scared to go into the ocean for years, Open Water was based on a true story, so it was a legitimate reason not to go scuba diving. While the movie showed the couple's fate, in real life their bodies were never found.

Released in 1979, The Amityville Horror was a haunted house story that starred James Brolin and Margot Kidder as a young couple who buy a house and then learn that it might be haunted. It was one of the top grossing independent films of its time and is still considered an iconic horror film to this day. There was also a remake in 2005 starring Ryan Reynolds.

The horror movie was based on the true story of George and Kathy Lutz and a house they purchased in the Amityville neighborhood in Long Island, New York. The original tragedy happened in 1974 when a man took the lives of six members of his family. One year later, the Lutz family moved in and then moved out after 28 days complaining of paranormal occurrences in the home.

The Conjuring franchise follows paranormal investigators Ed and Lorraine Warren as they investigate hauntings. In the first movie, they come to help a family who is experiencing possible paranormal events in their Rhode Island farmhouse. In the second movie, they help a family in Britain with the Enfield Poltergeist.

Ed and Lorraine Warren are real people and paranormal investigators in the real world. Both movies have a basis in their actual investigations and true stories from their past. The Enfield Poltergeist itself received a lot of press at the time it happened in in British newspapers, books, and television documentaries about the reported hauntings.

Psycho is one of the most iconic classic horror films ever made. Directed by Alfred Hitchcock, it was also possibly the first ever slasher movie; a movie that shocked audiences with the unexpected twists and turns of the story. Norman Bates, the villain in the film, was also based on a real-life serial killer.

While the story itself is fictional, it is based partially on the exploits of Ed Gein, a man who was found guilty the murders of two women but was declared mentally insane. Psycho not only showed his murderous behavior but also the psychological problem Gein developed when it came to his close relationship with his mother.

While Ravenous is a horror movie based on a true story, it was done so in the manner of a blackly comedic horror movie, which seems so very wrong. Guy Pearce leads the cast as a United States Army lieutenant who ends up battling a cannibalistic murderer outside a remote military outpost in the Sierra Nevada the 1800s.

This horror movie relied on two true life events for its story. The first was the Donner Party and the second was Alferd Packer, who the screenwriter listed as an inspiration. Packer was a cannibal who remained alive in the harsh winter by feeding on his companions, while the Donner Party were American pioneers who resorted to cannibalism to survive over a harsh winter in the Sierra Nevada.

4. The Exorcism Of Emily Rose

Before he directed the Marvel Cinematic Universe movie Doctor Strange, Scott Derrickson tackled a horror movie based on a true story called The Exorcism of Emily Rose. This was a movie formatted very differently from other exorcism movies, as much of the film is bookended by a court case where a Catholic priest is tried for the death of Emily Rose after a failed exorcism.

The true story this was based on involved the story of Anneliese Michel, who perished due to malnourishment and dehydration. The court case indicated that she was suicidal and suffered from schizophrenia but because she was only treated for possession, two priests and Michel's parents were found guilty of negligent homicide.

3. Henry: Portrait Of A Serial Killer

Most fans today know Michael Rooker either as Yondu in Guardians of the Galaxy or as Merle in The Walking Dead. However, over three decades ago, he portrayed a serial killer named Henry in this movie by John McNaughton. It was a very disturbing movie, told from the point-of-view of the psychopathic murderer.

Henry: Portrait of a Serial Killer was based on the confessions of Henry Lee Lucas, a man who admitted to over 600 murders in an eight-year time frame. The movie was based on his confessions, although in real life the investigators learned that he had nothing to do with most of the crimes he confessed to.

Released in 2001 and based on the graphic novel by Alan Moore and Eddie Campbell, From Hell starred Johnny Depp as Whitechapel Police Inspector Frederick Abberline, the man tasked with catching Jack the Ripper. The film then gave its own version of who the Ripper might have been, although in real life the killer remained at large and unknown.

Abberline was the real-life police inspector who investigated the Jack the Ripper case. Furthermore, many of the events in the movie took place the same way that they were filmed in real life. The main changes were the results of the investigation and the personal life of Abberline himself.

Jeffrey Dahmer was a serial killer who killed 17 men from 1978 until 1991 when he was finally caught. He was a cannibal who was diagnosed with borderline personality disorder and schizophrenia but was found legally sane at his trial, convicted of 16 of the murders.

A number of TV shows and movies were based on Dahmer, but one stands out from 2002 called Dahmer. This film starred Jeremy Renner as the villain while Bruce Davison portrayed his dad. It followed him as a socially awkward man with a troubled childhood and then proceeds to show his descent into madness.

This entry was posted by Screen Rant on January 13, 2019 at 11:01 am, and is filed under TV News. Follow any responses to this post through RSS 2.0. You can skip to the end and leave a response. Pinging is currently not allowed.