A Star Is Born Is The Weakest Oscar Favorite In Years 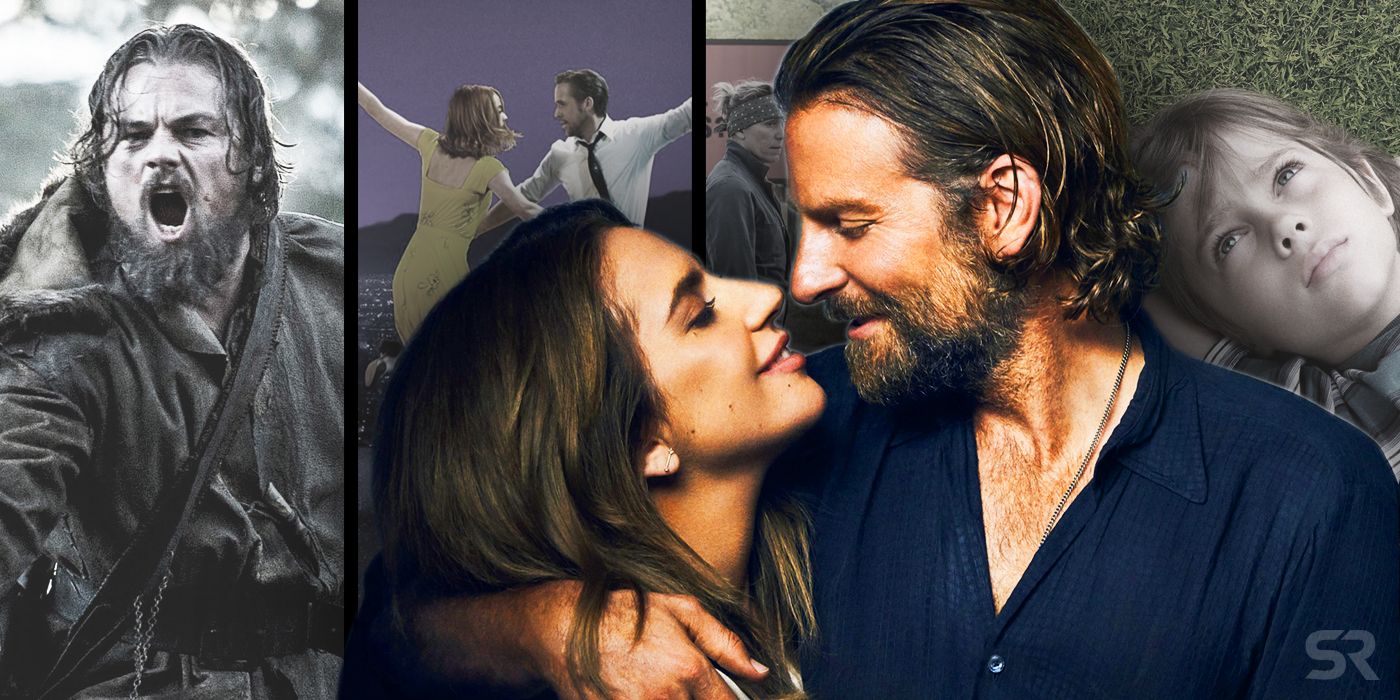 A Star Is Born has emerged as 2019's big Oscar favorite, with the bookies currently having it on odds for Best Picture rivaled only by Roma. Bradley Cooper's directorial debut, the fourth official version of the story after films in 1937, 1954 and 1976, was the toast of the festival circuit in Fall 2018, and quickly emerged as a favorite to win big at the Oscars. This was emboldened when supposed competition from previous Oscar winners, such as Damien Chazelle's First Man, Barry Jenkins' If Beale Street Could Talk and Steve McQueen's Widows, fell by the wayside care of poor box office and unclear critical praise.

Recently, the awards discussion is dominated by Green Book and Bohemian Rhapsody, the controversial winners of the Golden Globes for Best Picture in Comedy and Drama respectively (how the American Foreign Press classifies genres is another discussion). Both have also been criticized for inaccurate portrayals of their subject matter, distilling them down to reverse Driving Miss Daisy and straight Walk Hard: The Dewey Cox Story respectively, and the actions of the filmmakers; co-writer of the former, Nick Vallelonga, deleted his Twitter after racist, pro-Trump tweets surfaced, while the latter was directed by Bryan Singer, who is subject to a string of serious accusations of sexual assault. And yet both have still resonated with audiences; Green Book won the Audience Choice Award at TIFF and the Queen movie is the highest-grossing musical biopic ever.

Related: Golden Globes 2019: The Biggest Surprises From The Weirdest Awards Ever

Against that backdrop, A Star Is Born is seen as the good alternative; the deserving movie in a season defined by controversy and mediocrity. And while it may be better than either of the Golden Globes winners, that it's set to win Best Picture is a real disappointment.

The Problems With A Star Is Born As A Movie

A Star Is Born is by no stretch a bad movie, and as a directorial debut certainly promises some interesting things to come from Bradley Cooper. He gets an unexpected performance out of Lady Gaga, using her obvious musical talents as an entry into a more nuanced look at stardom, and it's frankly bizarre that Sam Elliott has fallen out of the Best Supporting Actor discussion (one of the major awards the movie deserves). The peak, though, is in the handling of the song performances: shot live at real music events, the close-up, on-stage experience is exhilarating (and puts the heavily green-screened, lip-synced Bohemian Rhapsody to shame).

Unfortunately, Cooper's chosen to use this as flavor to a poor story. A Star Is Born comes out of The Golden Age of Hollywood, with a story loosely based on a composite of true stories - and it shows. Stars (actors in the '37 and '54 version, musicians in the '76 and '18 take) rise and fall, but the manner of this narrative drive, the sense of replacement, and how relationships twist and turn is incredibly old-fashioned. Cooper more than any previous director has made great efforts to update the story, with a specific speech aiming to brush off any claims of unoriginality, but he can't get past a universal truth.

A Star Is Born's ending is bad, no matter the permutation. In the film's final act, Jackson Maine (Cooper) kills himself following a fight with alcoholism, rationalizing that he's better for Ally (Gaga) dead; something that proves to be right when his suicide truly makes her into a star (albeit only after finally taking her husband's name). It's all there: a back-handed view of depression, an "only way out" take on suicide, the female character being defined by her relationship to the male. The entire idea is so anachronistic that the only way for it to make it into a movie in 2018 is for it to be a remake. Unfortunately, that doesn't make it any more palatable, nor does it excuse Cooper's rushing through much of the emotional conflict.

Related: Every Version Of A Star Is Born Ranked, From Garland To Gaga

The Problems With A Star Is Born As An Awards Favorite

Best Picture rarely goes to the best picture of the year. That's a truth that any Oscar discussion needs to accept (but rarely does). However, in recent years we've seen a major overhaul in the sorts of films that do get honored.

From the mid-1980s onwards, the rise of Academy-specific Oscar bait saw a slew of prestige pictures with the illusion of many great things win, often pushed by heavy campaigns by the likes of The Weinstein Company. However, in the 2010s, that's begun to change. 2011 and 2012's double-tap of The King's Speech and The Artist signaled an end to the old school-Oscar bait, with a new era coming in. Now, big cinematic achievements - Gravity, Mad Max: Fury Road - sit in the Best Picture category rather than languishing in the technicals, while the big winners tended to be movies of genuine artistic achievement - Birdman, The Shape of Water - or great societal importance - 12 Years A Slave, Moonlight. The result is a far more exciting mix of winners (and, for the most part, nominees).

A Star Is Born is, in concept, very much a return to the days of yore. It's a remake of an old story rooted in the Golden Age of Hollywood, and while the tale has since shifted to be about the music industry, is still very much in that beloved Academy ballpark of grafting creators. As a winner, it doesn't represent all that much. If it was a truly great film, one that explored the ability for Hollywood to evolve over the past 80 years, then that wouldn't matter - but as already discussed, it's not.

Related: A Star Is Born Oscar Predictions: What We Think Bradley Cooper & Lady Gaga Will Win

Ultimately, A Star Is Born is a new twist on the old tropes of Oscar bait. It's got an edge and technical brio, yet that's all in service of getting that tick on voters' ballots (indeed, it's been Bradley Cooper's goal for the past half-decade to get himself a golden baldie). So why has it succeeded when so much change has occurred?

Page 2 of 2: A Star Is Born Has Weak Oscar Competition

A Star Is Born Pales Against Previous Oscar Favorites

The reason we're having this discussion is that A Star Is Born has, despite its flaws, become the face of the 2019 Oscar race. Where its festival competition fell, it's weathered everything, from critics to box office (it's made over $400 million worldwide). That definitely makes it a success worthy of entering the discussion, but that it's at the front really speaks of something outside of Cooper's and Warner Bros' control: this year's awards race has less strong competition.

If you go back through previous years, there were strong contenders  - Three Billboards Outside Ebbing, Missouri, La La Land, Mad Max: Fury Road/The Revenant, Boyhood - that at similar points in the race many expected to walk away with the big prize, yet ultimately didn't; in most cases losing to worthy alternatives. What's striking about these films is that, outside of their own ruthless awards seasons, each is a great picture that, had it come out in 2018, would be so far ahead. In 2017, there was an uproar when La La Land was called as Best Picture instead of Moonlight; you can't expect anything so emotionally evocative as with A Star Is Born on either side.

A Star Is Born Doesn't Have Good Competition... Or Does It?

And we're right back to Green Book and Bohemian Rhapsody. The race isn't about A Star Is Born, it's about how it's got such a leg-up in the absence of worthy competition. While the Queen film has momentum and a Best Picture nomination seems increasingly likely, it's unlikely to vie for the win. Green Book has more of a shot, but mounting backlash could dint it. From the presentation of the Golden Globes, it looks like A Star Is Born will win Best Picture because its closest competition isn't cut out for a full marathon. There simply isn't a good alternative.

But that's not exactly true. Despite being a black-and-white, foreign-language film released on Netflix, Alfonso Cuarón's Roma has slowly inched forward to become a new favorite in the race, with critics and awards bodies falling in love the technically virtuous, emotionally intimate story set in the backdrop of divided Mexico. Also close on A Star Is Born's heels is Spike Lee's BlacKkKlansman, a comedy-drama about a black police officer and his partner going undercover in the KKK that directly ties its racism story to the modern day and President Trump. Either of these winning would send a great message about Hollywood and its relationship to the rest of America and the world, but fundamentally they are greater achievements in filmmaking from two directors who've never seen a film win the big prize (Lee's never even won Best Director, Cuarón did for 2013's Gravity).

There are plenty of awards that A Star Is Born is a deserving winner for. Shallow is overplayed but no less great a song, and Sam Elliott's performance as Jackson Maine's brother is an anchoring supporting role. But for Best Picture, the film is a cut below what we've come accustomed to from the new-age Academy. All of this when Chazelle's going to miss out on a deserving Best Picture... again.

EDITOR'S NOTE: Green Book won Best Picture at the Producers Guild Awards, which, combined with its Golden Globe win, makes it the most likely film to win - not A Star is Born.

Next: A Star Is Born Review