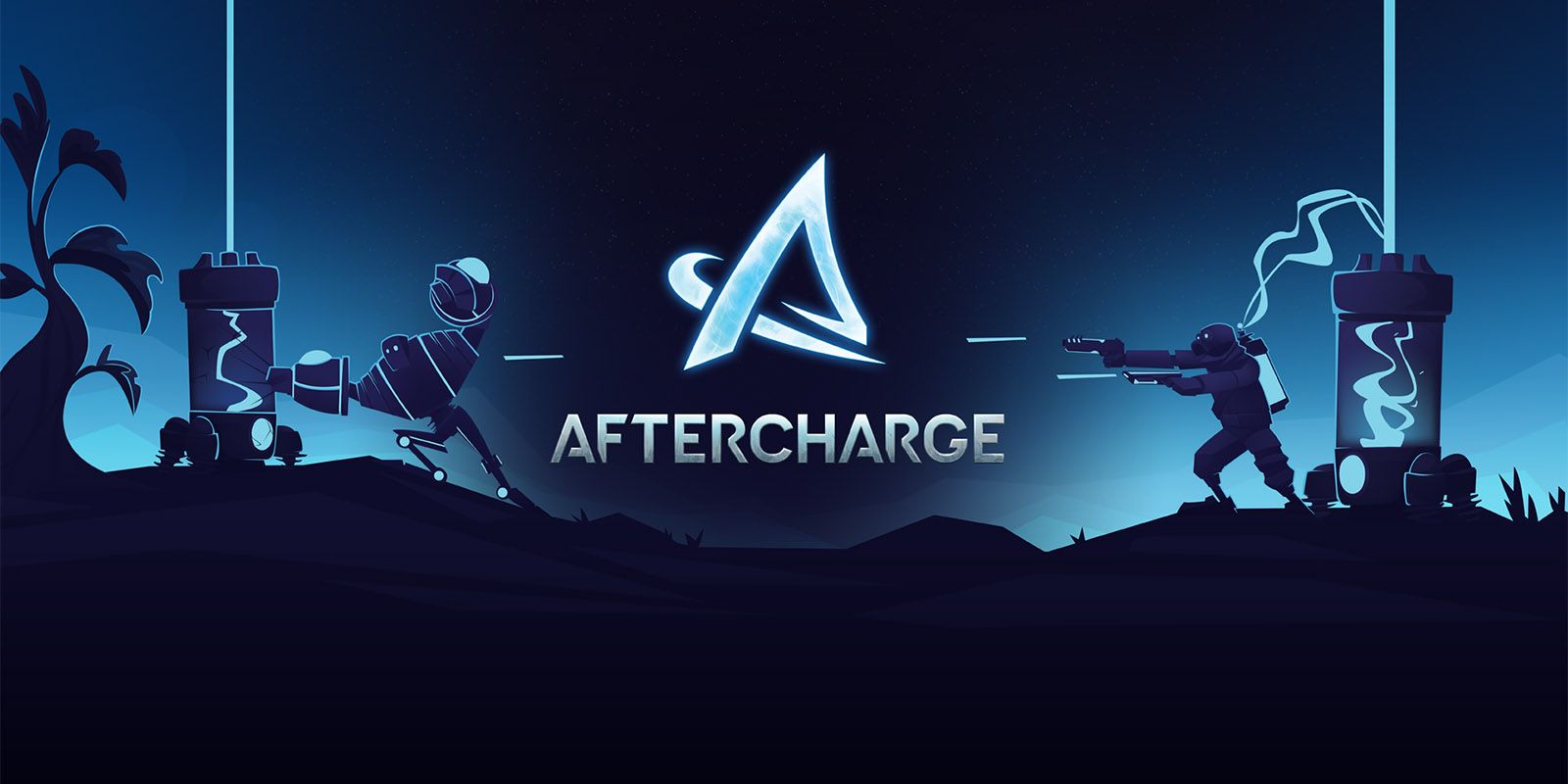 Chainsawesome Games' latest, Aftercharge, is a surprising, fun, and strategic multiplayer-only game that offers an experience like no other game of its kind. Aftercharge will offer hours of fun, though its lack of game modes and non-combat focus may make it a difficult sell for more mainstream-inclined gamers.

Aftercharge is an online multiplayer first-person shooter which pits two teams of three against each other in an arena-like setting. While on the surface this may sound like your run-of-the-mill multiplayer experience, Chainsawesome throws a curveball into the mix. Instead of mindless shooting, dying, respawning and repeat, Aftercharge opts for strategy and communication. The guarding side, called Enforcers who are invincible, must defend six extractors from the attackers, called Workonics who are invisible robots. The robots can be disabled when their energy levels hit zero, but they can always be revived quickly by teammates. Attackers win when they destroy all six extractors and the defenders win when they disable all three invisible robots.

Again, winning on either side is nearly impossible in Aftercharge without some level of communication. While initially invisible, robots can be uncovered while attacking or within proximity of the defending side. Distraction and misdirection is key for attackers due to their lack of weaponry and, again, the fact that defenders are invincible. For defenders, it comes down to finding the right rotation of defending extractors and trying to uncover the invisible robots. This can make for some tense gaming situations but it feels all the more rewarding when picking up victories. Adding to this level of suspense is a feature called Orbital Strikes, which occurs after ten minutes have elapsed in a game and every minute afterwards. These bombings slowly reveal the invisible robots until they are completely visible, so attackers will have to work quickly.

Aftercharge also bucks the recent trend of both character classes and cooldowns in multiplayer titles. Instead, players choose from a variety of characters that perform different roles during a match. Strategy will again need to be utilized during character selection as players will want to balance their teams for an effective match. In fact, these characters have both a strength advantage and weakness disadvantage counterpart character on the enemy team, though it's not something that's going to cause too many issues if players implement intelligence and have solid teammates. Additionally, the characters have a difficulty range based on how hard they are to use in a match. Both sides have two easy, one medium, and two hard characters to choose from. This system makes it very easy for less experienced players to jump right into Aftercharge without it feeling too overbearing.

Cooldowns are non-existent in Aftercharge as well and special abilities - each character has a specific one tied to their character - can be used as much as needed. The tradeoff is that abilities (and for defenders, firing weapons) consumes energy. Players need to keep an eye on the energy bar and recharge it at extractors. For defenders, this simply means getting in range of extractors while attacking robots must punch extractors to regain their energy pool. This creates an environment that requires smart play and is another one of the game's biggest strengths.

While balance and strategy are both keys to Aftercharge's success, it would be nothing if the game didn't tick one of the most important boxes necessary: fun factor. Luckily, the game offers a lot of inherent fun, mostly due to the fact that no two matches will ever be the same. In some ways, it's almost like a nearly-combat-free version of Rainbow Six: Siege in its execution, though on a much smaller scale and requiring more out of the box thinking. The game is certainly not for everyone, though it will certainly find a niche market as it adds more content during its life cycle.

In terms of available content at launch, this is where Aftercharge disappoints. Featuring only its standard (albeit unique) multiplayer mode, the game lacks variety. This could hurt it in the long run as playing the same mode over and over again will cause players to flock to other games. Chainsawesome will need to nip this issue in the bud early on, as they already have a highly entertaining and distinct model to build off of. It would be a shame for Aftercharge to fade into obscurity before it even has a chance to really catch on.

The maps, while beautiful to look at and featuring intuitive design work, are too few in number to be entertaining forever. At launch, there are four maps available, all differently laid out and constructed in the same asymmetrical way as the rest of the game. Still, as much diversity as these four maps offer, it can feel a little samey after more than a few hours of gameplay.

These smaller issues aside, Aftercharge is a quirky, thrilling and uniquely demanding good time. Chainsawesome has managed to create originality in a genre overstuffed with copy and paste shooters and shared MMO clones. However long the game lasts in the minds of players, the studio should be proud of this feat alone. It's not every day a multiplayer title comes along, especially by an indie company, that shocks and awes in such an authentic way. If that's what you're looking for in a game, Aftercharge may be the right fit.

Aftercharge is available now on Steam and Xbox One for $19.99. It will release at an unspecified later date for Nintendo Switch. Screen Rant was provided an Xbox One copy for the purposes of this review.