« Dungeons & Dragons: The 20 Most Effective Tricks To Beat Dragons
Sony’s Bringing Back Its Biggest Franchises (After Losing James Bond) »

All The Predator’s Alternate Endings Explained 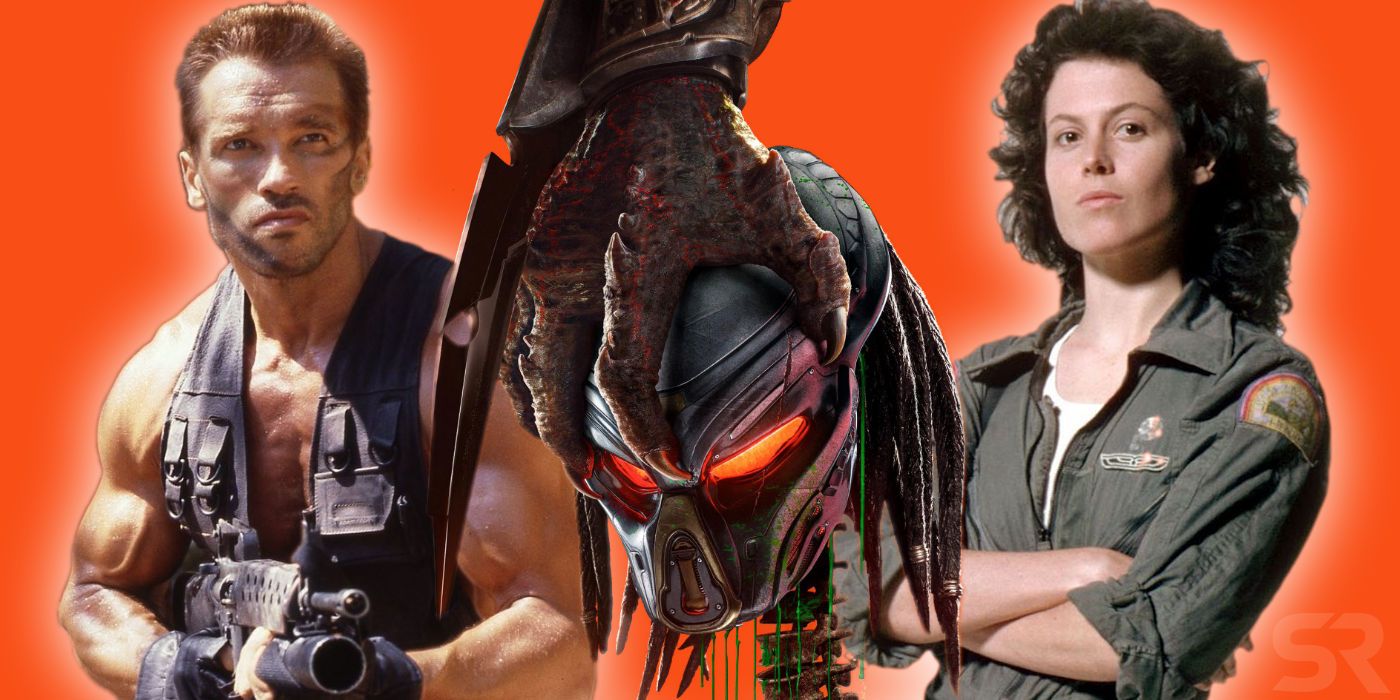 The Predator's Super-Suit ending was roundly mocked by fans, but it turns out it was one of the tamer options considered. The Predator franchise began in 1987 and was born from a simple high-concept pitch; an alien hunter arrives on Earth to stalk the planet’s most lethal prey – man. The film went through some production woes, like the design of the original Predator (played by then-unknown Jean-Claude Van Damme) being so atrocious it had to be completely redesigned. The end product was an instant classic, however, thanks to a tight screenplay, tense direction, and an endlessly charismatic cast led by Arnold Schwarzenegger.

Of course, Predator's success led to sequels, but the Predator franchise has evolved in odd ways. It took a 14-year hiatus following the lukewarm reception to 1990’s Predator 2, before being dusted down for a long-awaited smackdown with the Xenomorph in both Alien Vs Predator movies. It returned again for arguably the best follow-up in Predators, which found a ragtag group of soldiers and assassins being hunted on a predator game planet. The series has always been a reliable earner financially, but it’s never been a box office juggernaut either. Shane Black (Iron Man 3) wanted to change when he came on board to direct The Predator. Black actually appeared in the original movie as one of Schwarzenegger’s ill-fated commandos, and he wanted to resurrect the franchise as a genuine event.

Sadly, the production proved to be a messy one, with negative test screenings leading to sweeping reshoots and narrative tinkering. The released movie bears these scars, suffering from rushed and confused storytelling. And this extends to the ending, where the heroes learn the Fugitive Predator came to Earth to present humanity with a gift against an upcoming invasion; an Iron Man-style suit of armor dubbed the Predator Killer. This scene was widely derided as ridiculous and out of sync with the rest of the movie. While not all of them were shot, there were other denouements considered, so let’s break down the unused endings of The Predator and see if any of them were an improvement.

Despite Predator being one of his signature movies, it’s a surprise Schwarzenegger has never reprised his role as Dutch. This isn’t from a lack of effort on the part of producers as he’s been offered cameos in pretty much every sequel aside from Alien Vs Predator: Requiem. Fans have been crying out for his return but for The Predator, the studio insisted on introducing the audience to new characters. Black wrote a prominent cameo for Schwarzenegger nonetheless, with the intent of giving the character a larger role in a potential sequel. Unfortunately, Schwarzenegger wasn’t interested in a cameo - and he didn’t seem to the like the script itself very much - so he declined.

Schwarzenegger's Dutch cameo would have been the final scene of the movie, with a helicopter appearing after the heroes have defeated the Upgrade Predator. McKenna (Boyd Holbrook), Bracket (Olivia Munn), and Rory (Jacob Tremblay) approached the chopper, with none other than Dutch Schaeffer stepping out. He tells them to hop onboard, with Rory asking if he should climb on as well. Dutch smiles and replies, "Especially you." So, it was a tiny cameo that teased the Dutch’s expanded role in a Predator sequel, in addition to implying Rory would figure into the military’s plan to fight an impending Predator invasion of Earth.

McKenna's Dare To The Predators

Following Schwarzenegger’s cameo rejection, it seems The Predator would have ended on a much quieter note. Following the defeat of the Upgrade Predator, the survivors mourn the loss of The Predator's Loonies and bury the various mementos Rory had been secretly collecting from each of them. Then, they would have looked up at the dawning sky, which is still twinkling with stars, with McKenna pointing to one of them and daring it to "come and get us motherf*****s." Rory then admonishes his father’s bad language, and the group gets up and leaves. It’s not exactly a rousing note to end on, but McKenna’s line hints that he knows there will be future battles to fight. That said, it's easy to see why the studio felt this ending needed a little more oomph to get audiences excited for another entry in the Predator franchise.

Alien's Ripley Was The Predator Killer

It’s no secret The Predator underwent a huge reshoot that changed the third act. Instead of being hunted in a forest by the Upgrade Predator, there was an entire subplot where The Loonies are brought to Area 52 and introduced to two "friendly" emissary Predators. These elders aren’t necessarily good guys, but they don’t agree with the impending invasion of Earth, so they came to help humanity prepare so it’s a fair fight. This led to a huge battle where the Upgrade Predator invades the base and unleashes a horde of misshapen Predator hybrids dubbed The Menagerie. The heroes then escape on an armored vehicle while fighting off the creatures, thereby resulting in the deaths of some key characters.

Test audiences reacted poorly to this section, so The Predator was retooled to put more focus on the Upgrade Predator as the antagonist and less of an emphasis on the DNA splicing subplot. The removal of a key storyline results in some slipshod editing in the final cut, and the movie’s original ending would have done little to raise excitement for a sequel. That’s why a last-minute reshoot was organized a few months prior to the film’s release to add a cliffhanger. They ultimately chose the Predator Killer armor but they shot two more variations that would have got fans talking.

One alternative ending revealed the Fugitive Predator's mystery pod was covered in Weyland-Yutani logos and opened to reveal none other than Alien icon Ellen Ripley inside. Ripley’s face is covered by a Facehugger-style breather mask, but her name is seen clearly on her uniform. This definitely would have been an unexpected twist, but not in a good way. Having Ripley appear in a modern-day setting makes no logical sense, and since she’s never faced off with the Predators before, her designation as a Predator Killer is somewhat baffling. The Predator reshoots had teased the Alien Vs Predator movies are considered canon – best seen with Lex's Alien tail spear at Project Stargazer’s base – but the movie’s hard right into teasing a new AVP crossover reeks of studio desperation.

Needless to say, the sleeping Ripley is portrayed by a double and not Sigourney Weaver, and it's hard to imagine a scenario in which she would have agreed to return. Weaver had previously insisted on Ripley’s death in Alien 3 to rule out an appearance in a proposed Alien Vs Predator crossover, which is a concept she found horrible. She would go on to badmouth 2004's Alien Vs Predator, and while she’s expressed interest in some day returning as Ripley, this probably isn’t what she had in mind.

Aliens' Newt Was The Other Predator Killer

To this day, one of the most controversial aspects of the Alien franchise was the decision to kill off Newt and Hicks in the opening scene of David Fincher’s Alien 3. While their sudden demise cast an appropriately gloomy tone over the movie, it also robbed Ripley of her victory at the end of James Cameron's Aliens, and the move felt unnecessarily cruel because of it. There had been talk of bringing Newt back in the past; Joss Whedon’s original treatment for Alien Resurrection focused on Newt being cloned, but once the project started gaining momentum, the studio insisted on Ripley instead. Then Neill Blomkamp’s canceled Alien 5 would have seemingly retconned Alien 3 and Resurrection out of existence, and then continued the adventures of Ripley, Hicks, and Newt.

Without a doubt, the strangest alternate ending for The Predator centered on the pod opening to reveal Rebecca 'Newt' Jordan. Not only is the character alive but she’s also now an adult too. The explanation for her return was almost certainly being saved for a sequel, but it at least suggests the events of Alien 3 were being ignored. It's hard to think of an explanation for the return of either Newt or Ripley that doesn’t involve time travel, which would have been an unsatisfying answer at best. If the studio really wanted a link to the Alien series, surely having the pod contain an egg or an Alien Queen would have made more sense, and indicating the Xenomorph itself was the perfect Predator Killer.

More: The Alien Prequels Are Better Than The Predator