« Billy Zane to Play Marlon Brando in Upcoming Biopic
Harry Potter: 20 Things That Make No Sense About The Malfoys »

Aquaman: Our Interview with Patrick Wilson 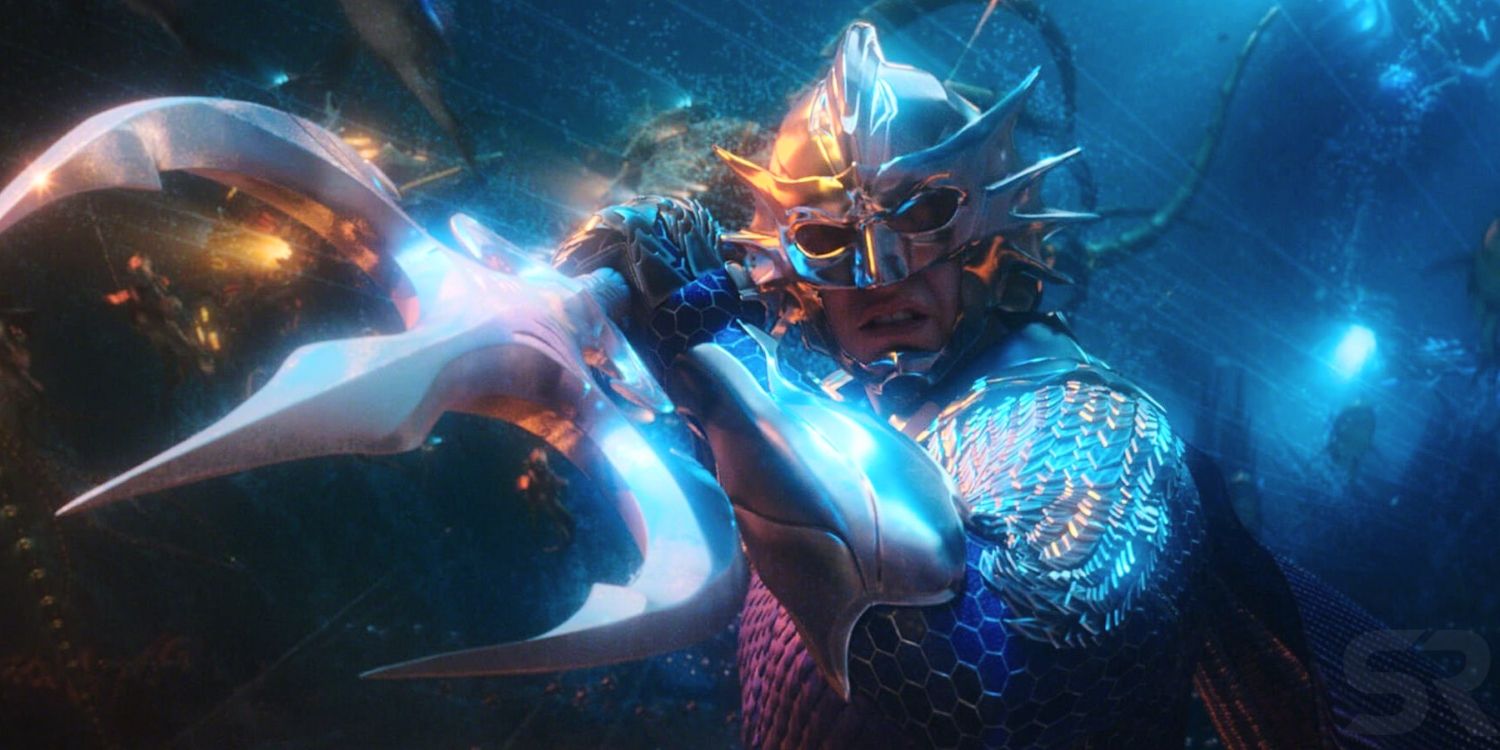 When director James Wan signed on to direct Aquaman, some fans dared to hope that his Insidious and Conjuring star Patrick Wilson might follow. And fortunately, Wilson's portrayal of Aquaman's iconic half-brother and rival Ocean Master lived up to the task of going toe-to-toe with star Jason Momoa.

Screen Rant had the chance to interview Aquaman star Patrick Wilson ahead of the film's release, to learn about the process of making this one of a kind fantasy, working with Jason Momoa, and bringing a refreshingly not-so-evil villain to life in the DCEU. Now that audiences around the world have gotten to see the movie for themselves, it's time to ask the villain what he hopes comes next for the Aquaman series - and whether a path back towards heroism may be possible in Ocean Master's future.

RELATED: Aquaman is Black Panther, But With The RIGHT Ending

You've had experience with comic book adaptations starting with Watchmen, where much of that film was a case of recreating comic book panels exactly as they appear on the page. How different is it going from that, to some of the visuals in Aquaman where so much of it is VFX, it's hard to imagine anyone but James Wan knowing what it's going to end up looking like?

Right. Well, there's a lot of... before each scene, even in that all VFX world of Atlantis, we get what's called a pre-vis, so we had a previsualization which looked like sort of an archaic '80s video game almost [laughs], of what it's going to be. And then he's got great artists that he works with and surround him, so you get to see the artwork so you understand the world, that would help. And then just your imagination. That would set the tone more than anything.

As far as going back and looking at certain panels of the comic, it actually was super important. Because while we didn't pull the direct storyline from one specific comic, one thing that's pretty clear, certainly with the New 52, is any time Orm is on screen as Ocean Master with that mask on, you just see this grit... these teeth... and this fight, you know? So that was something that we could really use from a very technical perspective. Sort of, 'Look at this panel, look at his face, look at how much he's contorting in it,' you know. That is important. I'm sure if I was playing Judge Dredd it would be the same thing, 'How do you act with your mouth?' So that's important, you know? That's hugely valuable. So from that perspective it was similar to Watchmen, where you're going back and looking at panels.

Was that as freeing for you as it is for Orm? In the story he is very buttoned up, very in control. Then by that third act he is just in a rage, at times.

Yeah, it was a lot of screaming that we would have to sort of temper and only give a few takes and do it in post production and... that becomes pretty taxing. Because you also just want to make it very--being angry for the sake of being angry is sort of stupid. So everything just had to be motivated. And you needed to be motivated by your actions.

In contrast to that, it struck me in Orm's formal introduction scene - in the golden armor, with the cape, in this enormous cathedral, and Arthur chained in front of him. The movie even pulls back to show you how epic this moment really is...

What is it like working those scenes with Jason Momoa? Because Orm and Arthur's moments are very personal, despite the scale of the surroundings.

That's right. Yeah. Well... welcome to James Wan. I mean, that is--listen, I knew on the first Insidious movie. I could go back to a few scenes there. I could go back to a scene in Conjuring where it's me and Ron Livingston under a hood with a scene on the page or even to most, no disrespect, most studio heads, would go, 'What is this scene doing? There's no action, there's no scare, c'mon, move it along.' And he fights for those scenes because he knows that you have to be invested in the character and plot will come, plot is easy. Think of any Western, you really need the character moments. And so it's easy to find why Arthur and Orm would fight. That's easy. That's simple. That's a given situation. What's more interesting is find the moments where you wish you could get along, try to convince your half-brother that he's doing the wrong thing, change his mind, be active, you know? Those were the things that were fun to play. And like you just said, we did not have a lot of real estate in doing that. You're talking really about two scenes, two or three scenes where Orm has to be very real in those moments: 'Please leave, you're not going to win this.' Which... he's not! You're basically saying, 'As big as you are, as tough as you are, this is not your world, trust me. Get out, go home, don't come back.' And he knows he can't. He knows his brother can't.

So those moments, I think that's what's fun to show the scope. Especially in that throne room, to see this [laughs]... this huge, mammoth room. And that actually was a giant sound stage. I actually was sitting on the throne, they did build that throne. And then they're flying me down on--I mean that was all practical. I didn't, obviously you had to go, 'Wait why are we in this giant room, what's going to happen? Oh there's going to be hundreds of soldiers around you... What?' So then you understand the scene. And he really does fly right up to me with those chains, within about a foot, and that was all very practical. Very real.

That scene you allude to, in the Ring of Fire, I can't remember another time where a superhero and their villain are both saying, 'Neither of us wants this to happen.'

That really informs Orm's arc over the rest of the movie. He gets an ending most villains don't where he's defeated without being dishonored. He gets to live, you know? Did that feel like an important decision for you and James? To cast Orm as not necessarily wrong or evil?

Right. Well, I think you'd have to speak to James on why he chose this, and why he chose that, but I can try to be objective and look at me. And when you cast me [laughs], you know, I'm pretty opposite physically to Jason. At least in being this, you know, very clean-cut, white guy. And I think there's an earnestness you know, that you get to payoff with Orm. And having his mother there, as well is you see... because remember, the way that we've set him up is being very--he's an ecowarrior. He's pissed at what the surface has done to his world. I don't think anybody would argue with that.

Now how he goes about avenging that? Sure, I'd rather he not take over the whole planet or kill the surface world. But you understand where he's coming from. So by the end you do want him to have that payoff, which I think you do get in the movie. And of course in Orm's eyes he would rather die by the sword, or the trident. That's very Shakespearean of him. That... mercy is for the weak, I guess, if I'm quoting Cobra Kai.

I also think the movie makes it clear that this is not the end of Orm's story. He was wrong in his actions but not his heart, maybe.

I won't bother asking if you would come back to play the character, but do you think there is enough there in the film to believe that they could meet in the middle, Arthur and Orm? Or is there another step for him that would make more sense to you?

I think it would be interesting to see where he goes. I do. I mean even in the comic, even when he is jailed and breaks out of jail. I think winning over his armies may be a difficult journey [laughs]. But I think because they're blood-related, that there is always some hope there. That's the journey. so I would be very interested to see his relationship with Arthur in the future. More interested in that, honestly, than like what he would be like with a group of supervillains. I don't think he would get along with anybody, you know?

Now that you've been able to see the finished film, is there a moment that stood out for you? Not necessarily one of Orm's scenes, but as a movie fan or just a fan of James Wan's that sticks in your memory?

Yeah, two things. One, for the sake of the movie I think the opening seeing Nicole and Temuera Morrison sets the tone, sets the heart, sets this fun, tongue-in-cheek at times world [laughs]. And she just... they're both so fantastic. They really are, I love it. So for me, the opening.

And then, I believe there's some music--the score of the whole thing is amazing, but I know Joe Bishara, our lovely Conjuring and Insidious composer and villain, had some music in the Trench sequence. That's pretty classic Wan there of just scary, surprise moments to those creatures, that's a little nod to the horror world. And that shot of them going down with the red light, and you just see thousands of those. I mean he showed me that about a year and a half, long before we started shooting, it was, 'I have this idea for the Trench and there's this shot of them going down with the flare' and I was like, 'Ahh that gives me the creeps!'

Well I am so thankful for your time. I applaud your Orm, I applaud his ever-changing fashion sense...

I won't ask you to pick a favorite because you couldn't.

Stay tuned to Screen Rant for more coverage of Aquaman with insights from the cast and crew.

This entry was posted by Screen Rant on January 12, 2019 at 4:01 am, and is filed under Interviews, TV News. Follow any responses to this post through RSS 2.0. You can skip to the end and leave a response. Pinging is currently not allowed.