Aquaman’s Post-Credits Scene Has A Flashpoint Tease: What It Means For The DCEU 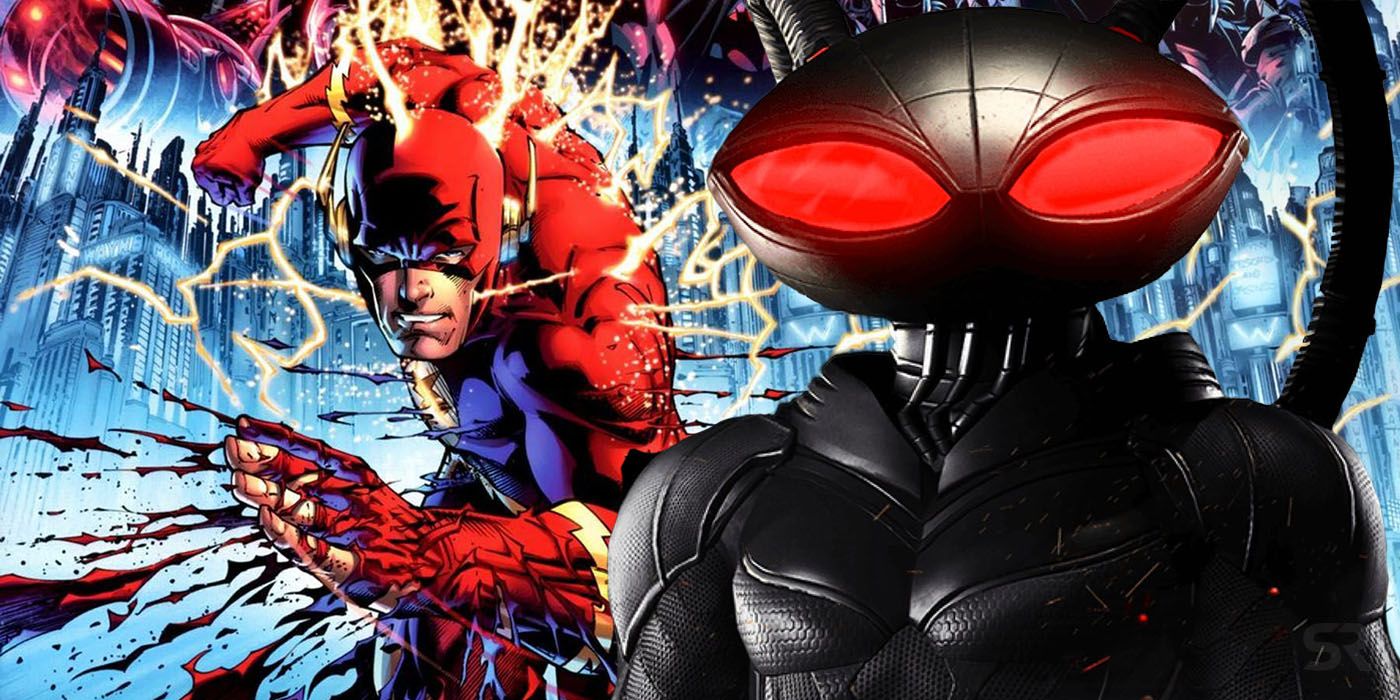 Aquaman's post-credit scene has an interesting tease for the DC Extended Universe Flashpoint movie, but there's one small problem with that - there isn't going to be a Flashpoint movie. No, this isn't the result of us passing into an alternate timeline, but rather the result of Warner Bros. backtracking on basing the first solo movie with Ezra Miller's Flash on Flashpoint, the 2011 comic miniseries written by Geoff Johns.

The Flash movie has been somewhat stuck in limbo for the past couple of years. At one point, Warner Bros. had a confident lineup of DCEU movies that included Justice League Part 2, a Cyborg movie, and Green Lantern Corps. However, since that slate was originally announced the DCEU has been through a series of highs and lows, and Warner Bros.' structure of DC Films executives has been through a couple of shakeups, meaning that the future of the DCEU now looks very different to what it once did.

Related: What is Flashpoint?

Directed by James Wan, Aquaman was made at the heart of the DCEU's biggest transition, with plans for other movies shifting around it. Since Aquaman is part of a shared cinematic universe and takes place after the events of Justice League (which also introduced Aquaman's partner in crime and love interest, Mera), it naturally has several links to the rest of the DCEU - including a bizarre rumor about Aquaman and Wonder Woman dating that has more to it than meets the eye.

Secondary villain Black Manta gets knocked out of the fight before the movie arrives at its third act, but he does make a comeback in Aquaman's post-credits scene, which sets him up to return in a future movie. In this scene, a wounded Black Manta wakes up on a fishing boat off the coast of Italy and finds Dr. Stephen Shin (played by Randall Park) examining his super-suit. Shin recognizes the Atlantean tech because he has been obsessed with the possible existence of Atlantis, and has been gathering evidence in the form of newspaper clippings about Aquaman, which are pasted to the walls of his boat. One of those newspaper clippings

While this might just seem like a throwaway world-building gag about the media furor over the Justice League, there's actually more to it than that. Speaking on the Fire and Water podcast, Neil Daly (who organized the test screenings for Aquaman) offered some intriguing behind-the-scenes details for the movie, and explained that the newspaper clippings were designed to tease the upcoming DCEU movies:

"One of [the newspaper clippings] is from Coast City [home of Hal Jordan a.k.a. Green Lantern]. There was another one, that one of the newspaper headings said 'Wonder Woman Nixes Aquaman Dating Rumor," which most people are just going to take that as tongue-in-cheek and think it was funny. But at the time of the filming, that was when they were still talking about going ahead with Flashpoint being the Flash story that they were going to do. And so there was a reference to Aquaman and Wonder Woman dating."

Aquaman and Wonder Woman have never been romantically involved in DC Comics... except in Flashpoint. And even then, it wasn't particularly romantic. In that story, Barry Allen goes back in time and saves his mother from being murdered, which results in history unfolding differently. In the new timeline, Aquaman and Wonder Woman decide to get married for the sake of strengthening their respective dynasties, but the decision sparks serious backlash among both the Amazons and the Atlanteans. On the day of the wedding there is an assassination attempt that leads to further violence and the union being called off. In the wake of this there is an Atlantean-Amazonian war that rips apart the world and results in the deaths of many major DC characters.

Related: Aquaman's Box Office Success Was Better Than Anybody (Even DC) Expected

The DCEU Was Going To Do Flashpoint

The original plan for the DCEU was based primarily around Henry Cavill's Superman and Ben Affleck's Batman, and in particular around director Zack Snyder's planned five-movie arc for Superman. Warner Bros. naturally assumed that the two most famous DC characters would also be the biggest draws at the box office. However, each movie that was released undermined those assumptions, with Batman V Superman: Dawn of Justice underperforming at the box office and Wonder Woman performing far better than anyone expected. Aquaman itself has continued to shatter those expectations by becoming the highest-grossing DCEU movie so far and the first to hit the billion dollar mark at the worldwide box office. Not bad for a guy who talks to fish!

One of the movies that Warner Bros. had lined up for the DCEU was a solo Flash movie. In July 2017, at San Diego Comic-Con, Warner Bros. revealed a logo for this movie that also dropped a bombshell: the title of the movie was Flashpoint! Fans of the comic were naturally hyped, but since then the plans have changed.

Page 2: The Flash Movie Is No Longer Flashpoint

The Flash Movie Is No Longer Flashpoint

It's unclear when exactly Warner Bros. first decided when the Flash movie would be based on Flashpoint, but in summer 2017 that was definitely the plan. At this time, Aquaman had been filming for about two and a half months, and the Flash movie was still searching for a director following Rick Famuyiwa's exit in fall 2016. The script for the Flashpoint movie was written by Joby Harold, and was submitted to Warner Bros. in September 2017. In October 2017, a report emerged that the Flash movie's future would depend on the reception of Justice League.

Justice League, after being handed off to Joss Whedon by original director Zack Snyder, did not get a great reception, with the biggest complaint among fans being the sense that the original "Snyder Cut" was lost amid heavy reshoots and editing designed to simplify the movie and lighten the tone. That tone-lightening was the first stage of a shift in direction for the DCEU, and the second stage came in the wake of Justice League's lukewarm reviews and box office.

January 2018 was a big month for both the Flash movie and the DCEU as a whole. IT and The Conjuring producer Walter Hamada replaced Geoff Johns (the writer of the Flashpoint comics) as the head of DC Films. A couple of weeks later, the Flash movie finally found not one director, but two: Jonathan Goldstein and John Francis Daley, who were two of the writers for Spider-Man: Homecoming.

The Aquaman reshoots, which included the post-credits scene with Randall Park, took place in spring 2018, and in April 2018 we learned that the Flash movie was no longer called Flashpoint. Though there were continued promises that filming would begin soon, it emerged in October 2018 that the Flash movie had been delayed and is now not expected to begin filming until late 2019 at the very earliest. As far as we're aware there still isn't a new script to replace Flashpoint, but it wouldn't be surprising if a new screenwriter (or screenwriters) was revealed in the coming months.

This Flashpoint Easter Egg Is A Relic Of Old DC

Even without Flashpoint on the way, the newspaper clipping in Aquaman's post-credits scene still works as an amusing bit of world-building that shows how the world (gossip magazines included) reacted to the emergence of the first ever superhero team. But because it was originally intended as a reference to Flashpoint, it also stands as an interesting relic of the transformative period during which Aquaman was made. Director James Wan had a considerable challenge on his hands, as the shape of the cinematic universe in which his movie was set changed significantly between the start of filming and the end of reshoots. It's little wonder that it's the most self-contained DCEU movie so far, with no cameos from other Justice League members and few references to events from other movies.

While the Flash movie may not be directly based on Flashpoint any more, it may still involve time travel elements. A couple of months after we learned that the original title had been dropped, it was reported that Back to the Future was being used as a "touchstone" for the movie. Based on what we know about the current direction of the DCEU, we can speculate that the Flash movie may retain aspects of Flashpoint (for example, Barry travelling back in time to the moment of his mother's death), but that it's dropping the global Atlantean-Amazonian war plotline and the countless superhero cameos in favor of a more focused story that's all about Barry.

So far the biggest success stories of the DCEU have been Wonder Woman and Aquaman, both of which mostly eschewed wider universe connections and the obsession with Batman and Superman in favor of focusing on their titular heroes. If Warner Bros. takes a similar approach with the Flash movie, they could have another huge hit on their hands.

More: The Flash Movie: Every Update You Need to Know