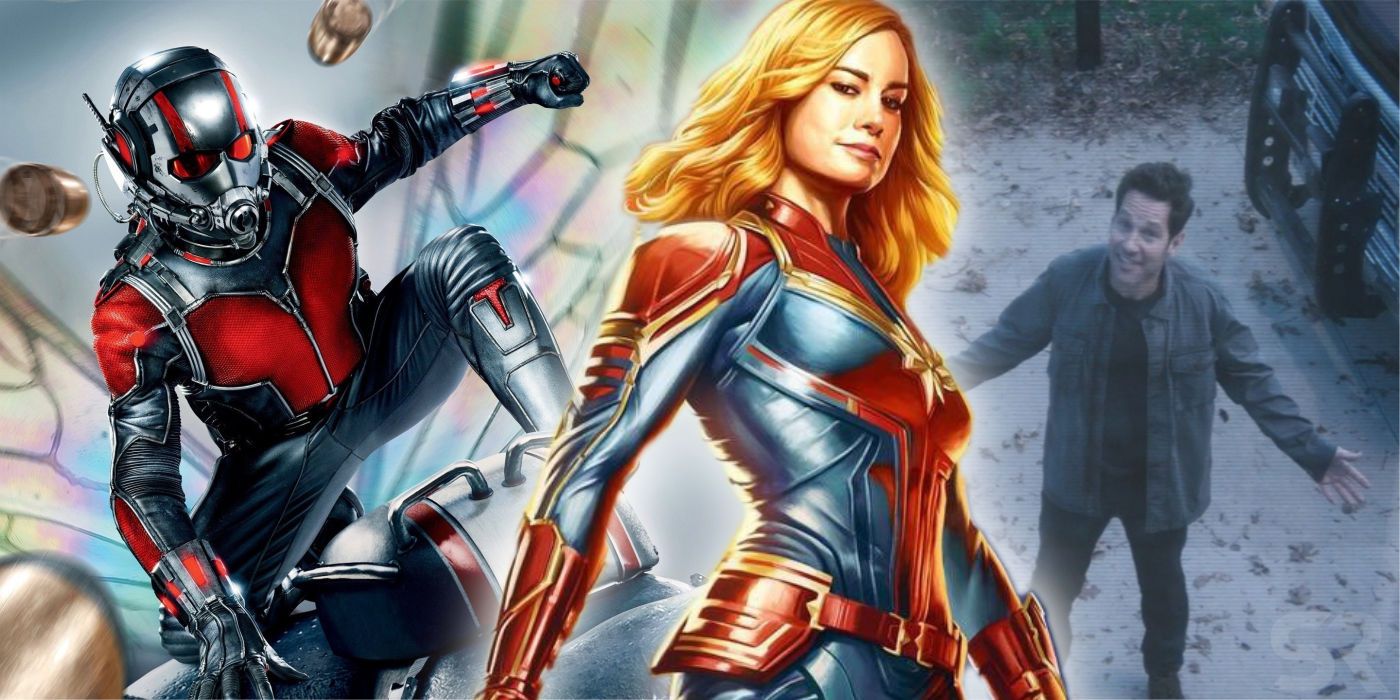 Does Captain Marvel's time-travel power explain how the Avengers will travel back in time in Avengers: Endgame? At the moment, the plot of Avengers: Endgame is a closely guarded secret. Indeed, there have been rumors that the film's marketing will only use footage from the first 15 or 20 minutes of the movie, which Marvel Studios president Kevin Feige has since confirmed that.

One thing seems certain, though; somehow, Earth's surviving heroes will manage to thwart Thanos. Although Avengers: Infinity War ended with the Mad Titan succeeding in his insane goal of erasing half the life in the universe with a snap of his fingers, the Avengers will ultimately triumph. All those who died will return; that's pretty clear given Infinity War killed off characters known to be appearing in MCU sequels, such as Spider-Man, Doctor Strange, and Black Panther. The snap will be either averted or undone, and Thanos will be defeated. 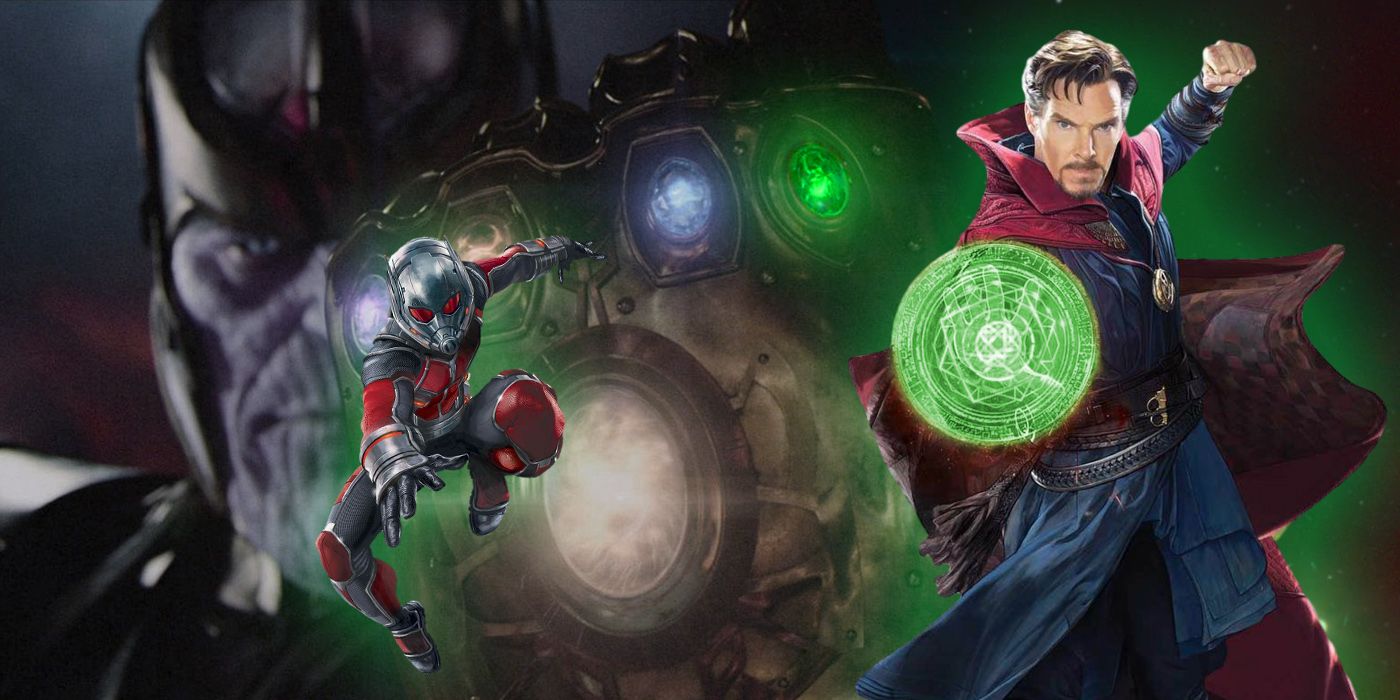 The first trailer for Avengers: Endgame confirmed that the Avengers have a desperate, last-ditch plan to put matters right on a galactic scale. In one crucial scene, Steve Rogers and Black Widow talked about this mysterious plan; "This is going to work, Steve," Black Widow insisted. The deaths of Bucky and Falcon seem to have shaken Captain America to the core, and he's still grief-stricken. In an unusual twist, Black Widow appears to be the one offering strength and counsel. But, while the trailer did offer a glimmer of hope in this scene, it remained absolutely silent about just what idea the Avengers have come up with. In order to work that out, you have to refer to set photos.

Set photos have made it clear that Avengers: Endgame will see the Avengers travel back in time. There have been many shots of the stars wearing classic costumes from 2012's The Avengers, Zoe Saldana has been glimpsed in her outfit from Guardians of the Galaxy, and there have been reports long-dead characters like Crossbones and the Ancient One will be returning. Crucially, one batch of set photos showed scenes clearly set during the Battle of New York, but with an unexpected addition - Paul Rudd was on set dressed up as Ant-Man. Given his character wouldn't be introduced into the MCU until three years after The Avengers, it seemed to be a strong indication there'd be time-travel.

More set photos showed Robert Downey, Jr.'s Tony Stark wearing a S.H.I.E.L.D. uniform that's been seen before in the MCU - worn by the S.H.I.E.L.D. unit Nick Fury assigned to guard Loki in the Helicarrier. Interestingly, those uniforms typically incorporate a face-mask, meaning Stark would be able to conceal his face with ease. And Downey was spotted in the same building photos were snapped showing Chris Hemsworth in the 2012 Thor costume, and Loki in chains. It strongly implied that Stark was attempting to infiltrate S.H.I.E.L.D. back in 2012, perhaps to contact Loki for some reason; the fact he was using subterfuge was significant, as it suggested the Avengers were attempting to minimize the disruption they caused to history.

The Marvel Cinematic Universe has certainly been edging closer to the concept of time-travel, particularly with the introduction of the Quantum Realm. The Quantum Realm is a mysterious plane of existence that can primarily be reached by going subatomic in size; in accordance with certain (real-world) theories of quantum mechanics, it's a place where all the normal laws of space and time break down. In theory, by accessing the Quantum Realm it should be possible to alter the very rules of reality itself, or even to travel in time. This idea was strongly supported by the post-credits scene of Ant-Man & the Wasp, which saw Scott Lang stranded in the Quantum Realm in the aftermath of the snap. Before he entered the Quantum Realm, Janet Van Dyne warned him not to get trapped in any "time vortexes." The film's director, Peyton Reed, admitted that this could set up Avengers 4 time-travel. Concept art even showed that Marvel considered explicitly introducing the idea in the film, with the characters visiting a so-called "Nexus" of memories in which a person can rewrite history.

The common theory is that Scott will get caught in a time vortex, and will emerge in a post-snap future. His unexpected return will clue the Avengers in on the fact that time-travel is possible, and they'll come up with their plan. This seems to be a reasonable theory, especially given the focus the first Avengers: Endgame trailer placed upon Scott's unexpected return. But it leaves so many questions unanswered, particularly about just how time-travel works in the MCU. Scott would presumably simply emerge wherever a time vortex spat him out, but in order to actually use the Quantum Realm the Avengers will need a way to control it.

Meanwhile, just what model of time-travel is the MCU intending to embrace? Every science fiction and fantasy series has their own model of temporal mechanics, which governs such basic ideas as whether it's possible to change the past or not. Certainly Tony Stark's decision to infiltrate S.H.I.E.L.D. in disguise suggests the Avengers fear that history could be rewritten for the worst, and they're attempting to contain the changes they make. But, frankly, what's the point of such subterfuge? If they're attempting to undo or avert the snap, then sooner or later they'll have to make a pretty drastic change that will (hopefully) result in half the life in the universe not being killed. Why would the Avengers be worried about changing the events of the Battle of New York, when they're attempting to change history on a universal scale? So far, it's difficult to say - but Captain Marvel may offer a vital clue.

According to Samuel L. Jackson, Captain Marvel herself can actually travel through time. Discussing the sheer scale of Carol Danvers' powerset, Jackson made a surprising observation; "At some point, we'll find out how powerful she is and all the things that she's capable of," he noted. "She's one of the few people in the Marvel universe that can time travel, so..." This is a very different to Captain Marvel's powerset from the comics, but it fits with theories that the MCU version of Captain Marvel is tied somehow to the Quantum Realm. It's long been known that the Quantum Realm would figure in Captain Marvel somehow, and attentive viewers have noted that the flare of energy that gave Carol her powers looks very similar indeed to the Quantum Realm explosions in Ant-Man & the Wasp.

It's important to remember that both Ant-Man & the Wasp and Captain Marvel should be viewed as crucial steps in the journey to Avengers: Endgame. Although the different filmmakers have been free to tell their own stories, there's a narrative tie between them all. Shortly after the release of Avengers: Infinity War, Stephen McFeely gave a sense of just how strongly connected they'd all be in an interview with BuzzFeed. "My hope is the conversation you and I will have a year from now, you’ll have a sense of the choices we’ve made over the course of an entire year of Marvel movies," he explained. "There’s a relationship between them all." It looks as though the concept of time-travel could well be that connection; Avengers: Infinity War establishes a crisis that can only be resolved through time-travel, Ant-Man & the Wasp contains a nod to the concept, it's developed in Captain Marvel, and ultimately used to save the universe in Avengers: Endgame.

When Captain Marvel Had Time-Travel Powers In The Comics

Surprisingly, although Captain Marvel isn't traditionally associated with time-travel, there is a comic book precedent. In the comics, Carol Danvers has usually gone under the codename "Ms. Marvel" - at least until 2012, when Kelly Sue DeConnick relaunched the character with a new costume and a new codename. The DeConnick run is known to be a major inspiration for the Captain Marvel movie, so it's perhaps significant that the very first arc revolved around time-travel. It saw Captain Marvel discover that her origin - tied to the explosion of a Kree device known as the Psyche-Magnetron - had fractured time itself. Fragments of the Psyche-Magnetron had been scattered through time and space, and whenever Carol came into contact with one of them, she was blasted through time to another piece of the machine.

Of course, it's doubtful that the film will involve a straightforward adaptation of this arc. But it's interesting to note that DeConnick viewed the moment Carol gained her powers as some sort of temporal event, fracturing time and space. What's more, over the course of the story Carol learned that it was possible to change the future; in fact, she wound up being manipulated by another pilot who was hoping to acquire the Captain Marvel powers in Carol's stead. All these ideas could easily be incorporated into the MCU.

In DeConnick's story, the time-travel became centered upon a plane that was traveling through time collecting fragments of the Psyche-Magnetron. Captain Marvel was ultimately able to return to her own time by intercepting the plane - and there was a curious effect when she did so. Carol described it as "butterfly protocols," and noted that being outside the timestream meant she was seeing every flight the plane ever took all at once. Conceptually, it's fairly similar to the idea of the Quantum Realm memory palace, where a person could enter and see every memory all at once - and interact with them. The DeConnick run could well be the basis of the MCU's time-travel models and mechanisms.

How This Impacts Avengers: Endgame

If this is correct, then Captain Marvel is crucial to understanding the plot of Avengers: Endgame. It will establish the basic ideas of just how time-travel works in the MCU, and will presumably set out some of the basic rules that will be followed by future films. More to the point, though, Captain Marvel won't just be important because she's a powerhouse who can help in the battle against Thanos; rather, her power of time-travel could itself be a deciding factor, as she'd be able to help the Avengers in their mission to rewrite history. Of course, if the DeConnick run really is the inspiration for the time-travel plot in Captain Marvel, then Carol will need help working out how to control this power. That could potentially explain some of the more random time-travel elements in the film - say, the casting of Emma Fuhrmann as an older Cassie Lang, or a cast list on IMDb that claims certain actors are playing scientists back in the '70s. Perhaps Captain Marvel and the Avengers initially struggle to work out how to get to exactly the right points in time and space.

Related: MCU Movies That Avengers 4 May Revisit Via Time Travel

This also potentially explains where Captain Marvel has been between her superhero origin in 1995 and the present day, when Nick Fury summoned her as he crumbled to dust. Perhaps Captain Marvel will end with Carol beginning to travel through time - and Fury's mysterious device will be what tells her what point in time to emerge. For the world, 23 years could have passed; for Carol, it could well have been a matter of just moments. Whatever approach Marvel choose to take, Samuel L. Jackson's surprising mention of time-travel confirms that Captain Marvel is a far more important chapter in the MCU than anyone had previously thought. It looks as though Marvel will use this film to establish just how time-travel works in their shared universe, while also setting up Carol Danvers to be one of the most important characters in Avengers: Endgame.