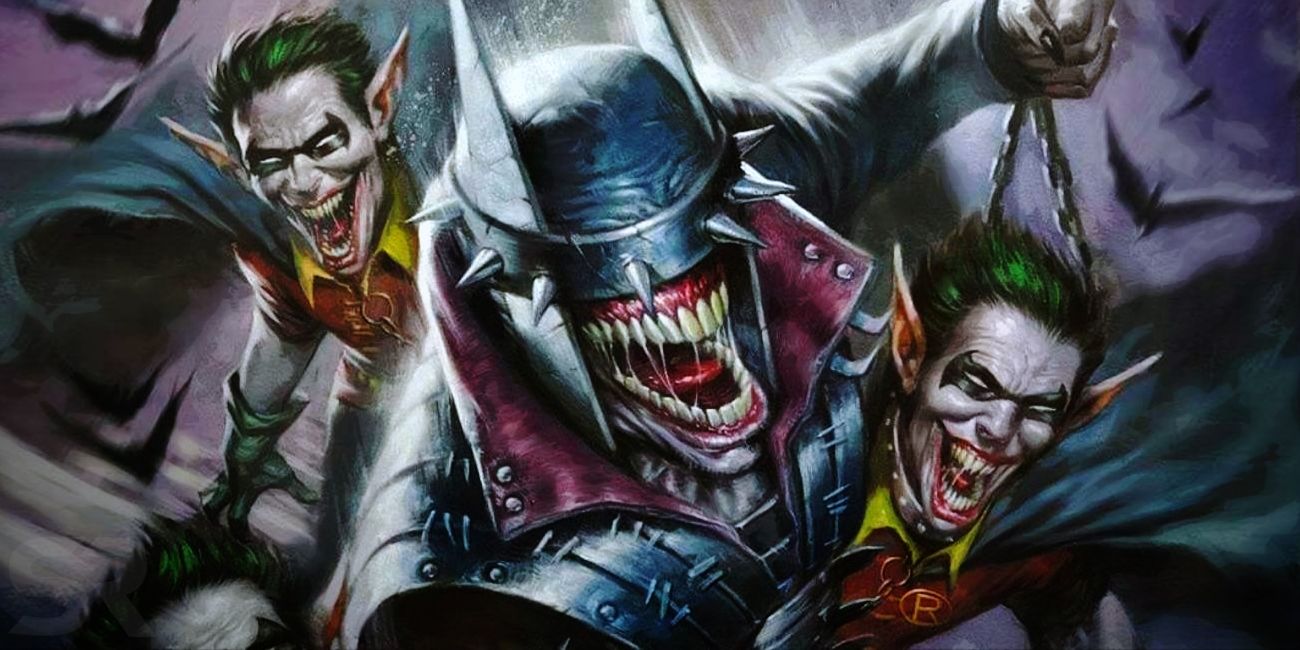 Batman has faced some of the most iconic villains in comic book history, but if you thought that The Joker was his greatest foe, it's time to catch up. Because Bruce Wayne's newest villain isn't just strong enough to beat him... he's the nightmare that Batman eventually becomes.

The new villain is going to be a surprise to Batman fans who missed out on last summer's METAL event. Still, even casual fans have seen different versions of Batman from across DC's Multiverse: the reality where Batman was a pirate, or Bruce Wayne was born a woman, and so on. But the small army of Batmen who attacked in METAL weren't fantasies; they were darker versions of Batman, born on worlds doomed to die, showing how far Bruce Wayne would go to save them. And of all the nightmare 'what-if?' questions these dark Batmen answered, their leader was the most frightening of all. What if Batman became the next Joker?

The Batman Who Became The Joker

The origin of The Batman Who Laughs could be pitched as "the version of Batman created when he killed the Joker," and be embraced by fans who feel that such an act would corrupt Bruce's mission. But the real cause was Joker's "last laugh" - a booby trap to guarantee that if Batman really did kill him, Joker would infect his rival with enough Joker toxin to transform him into the new Joker. And on this dark Batman's reality, that's exactly what happened. Batman then killed his family and the rest of the Justice League, making it look easier than even fans would think.

RELATED: The Batman Who Laughs' Twisted Version of Robin

Now, The Batman Who Laughs has come to the main DC Comics reality in his own comic miniseries. And with Scott Snyder writing it - one of the most acclaimed Batman writers, period, after his New 52 run - fans knew there was more to the villain's mission than just 'beating' Batman. No, after traveling the Multiverse The Batman Who Laughs has come to show Bruce Wayne the truth: that of every Batman in every parallel Earth, DC's most iconic Batman is the worst version.

Screen Rant got the chance to speak with Scott Snyder alongside the release of The Batman Who Laughs #2 (available now from DC), who explained his new villain's motives. According to Snyder, and despite what some readers might suspect, this new villain isn't trying to deceive. And if Bruce won't see the truth of his own failures, then he must be made to see:

The Batman Who Laughs isn't lying, he really believes this. Having traveled the Multiverse he comes here saying, 'I am the apex predator, I am the version of you that you're meant to be. But i'm going to show you why you're the absolute lowest on the food chain of Batmen. And why we all despise you'...' He believes very passionately that this Bruce Wayne on our Earth is the worst version across the Multiverse of Batmen. The weakest, most ineffective, least content. And he's here to say, 'I'm going to fix all that.'

If it sounds like Snyder has created a memorable story, that ain't the half of it. Judging by the writer's comments, it sounds like Joker's time as Bruce Wayne's greatest foe is over. But even if The Batman Who Laughs is the "final villain" that Bruce Wayne will have to face before Snyder bids farewell to the caped crusader, can he really pose a more offensive, evil, and twisted threat than The Joker?

Based on the first two issues... absolutely.

Page 2 of 2: Why The Batman Who Laughs is a Better Villain Than Joker

Joker's Madness, But With Batman's Mind

It might be hard to believe that the Bruce Wayne comic fans have read about for decades is somehow the worst version of Batman in the Multiverse. But to be specific, The Batman Who Laughs contextualizes his argument based on the Dark Knight's ability to effect change in his version of Gotham, and the world beyond it. He's using the truth of that mission (as he sees it) to destroy Batman piece by piece, showing that every time Batman retired, quit, or gave in, he found a better way to succeed.

It's a devious blow to strike, but as Snyder explains, it's one that only the merging of Batman with Joker could think of:

The Batman Who Laughs is himself a kind of final villain for me. Meaning he is the scariest villain that I've ever created or gotten to work on. Because he isn't the Joker, who is absolute alpha villain for Batman. He's worse, in the way that he's got all of Joker's evil but he's not chaotic and he's not impulsive. He's got Batman's strategic and brilliant mind, and all of his memories, and all of his training. So it's incredibly hard even to find a vulnerability.

Still not convinced that The Batman Who Laughs has presented a new, more existential threat to Bruce Wayne than the most iconic version of Joker? Well, manipulation, paranoia, and the injection of personal doubts are only attacking Batman's mind. Attacking Batman's body is another matter entirely. Because as terrifying as Joker's mind may be (in its similarities to Batman's, even), Batman will always have the upper hand in a fight. But what if he didn't?

Even if Joker hadn't killed himself to infect Batman in the very first issue of The Batman Who Laughs, Bruce would have a hard time standing against this new foe. Because even if his opponent is half Joker, the version of the villain that Batman is used to fighting has never actually been trying to kill him. At least, not as Scott Snyder sees it. That may prove to be the difference in what is shaping up to be Batman's greatest trial - at least with Snyder at the helm. Sure, Joker may claim to "understand" Batman like nobody else.

But is there anything more dangerous to a man who is masked, mysterious, and completely unknown... than the one person who has lived every moment of his life along with him?

Joker knows him so well, that's what makes him so scary. The Joker says, 'I know what you're afraid of, and I'm going to show you why that's so.' But Joker always does it in such a way that he's trying to prove a point. And I think there's something about Joker, also, that is performative and needs Batman. He wants Batman to acknowledge him, he doesn't want Batman ever to kill him, or do something past the line. At least our version of Joker, he's creating these things in his own weird mind to make Batman stronger, and continue this weird, evil dance with him. The Batman Who Laughs doesn't give a shit about dancing with Batman or any of it. He's just like, 'You're nothing to me, and the moment I saw you I had ten ways to kill you. I'm just going to move right through you.'

There's a moment in the issue where he puts his hand over Bruce's ribs... the same way Bruce describes his father putting his hand over his ribs, and filling in the spaces with his fingers as he was about to get shot. That's the terror of The Batman Who Laughs to me, and the fun of the series: there is nothing you have hidden from him. He knows you... and that's the ultimate villain.

The Batman Who Laughs #2 is available now from DC Comics.

MORE: The Flashpoint Batman Has Returned to DC's Universe