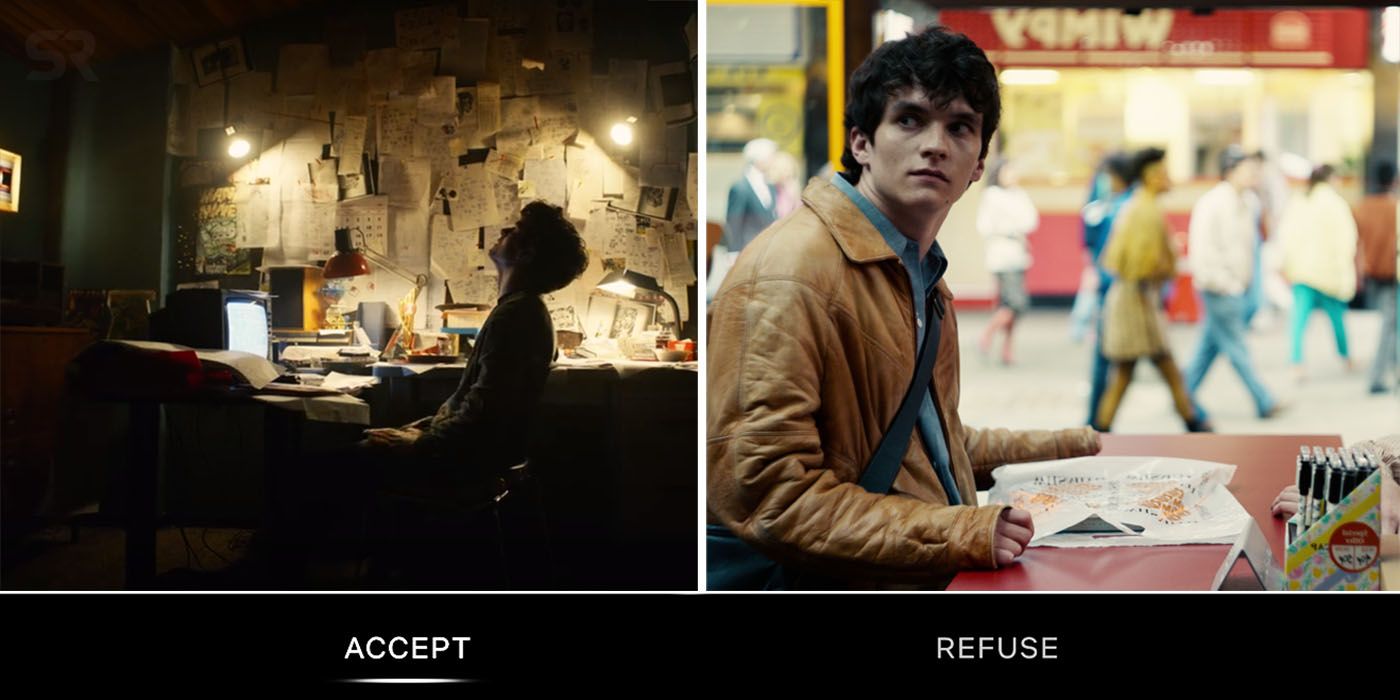 Black Mirror: Bandersnatch creator Charlie Brooker says that critics who aren't keen on the film's interactive focus can "f-ck off" in a recent interview. Brooker's cheeky defense of Black Mirror's interactive spin-off film came while answering questions about the creation and critical reception of Bandersnatch alongside co-showrunner Annabel Jones. Bandersnatch released on Netflix at the close of 2018, and the choose-your-own-adventure film has grown into nothing short of a cultural phenomenon since then.

The first full-length feature to come out of the warped Black Mirror Netflix series, Bandersnatch is an interactive movie set in 1984 that revolves around efforts of protagonist Stefan Butler (Fionn Whitehead) to adapt a choose-your-own-adventure novel into a video game. The onus of Butler's choices - and their unintended consequences - rest on the viewer. Five distinct endings can be achieved (as well as one secret post-credits ending), and the movie can unfold in over a trillion unique paths. While Bandersnatch has been generally well-received and its popularity has spawned numerous parodies and memes, the film has also received its fair share of criticisms in the fortnight since its release.

Related: How To Get The BEST Ending In Bandersnatch

In an interview with HuffPost UK, Charlie Brooker's colorful suggestion was in response to a question about his and Black Mirror co-showrunner Annabel Jones' thoughts on the public and critical reception of Bandersnatch. First, Jones expressed gratitude for the positivity with which many have met Bandersnatch, saying, "[it’s] just so satisfying that so many people have engaged with it." She then went on to acknowledge the initially "terrifying" thought of relinquishing some narrative control to viewers, which Brooker rejoined in saying, "It’s been interesting that you get different reactions from different people, partly based on what they’re expecting, or what they want." Unloading on critics whom he clearly feels don't have a leg to stand on, Brooker went on to say:

"There’s also some people that are like ‘I don’t wanna make decisions’, ‘I don’t want to do any of it’... well f-ck off, then. Do something else! And then there’s some people who think ‘oh, it’s too simple as a game’ or ‘games have done this before’ – well this isn’t on a gaming platform, it’s on Netflix. I’m well aware of what a computer game is, thanks."

Along with Susanne Bier's similarly viral Bird Box, the throngs of viewers that Bandersnatch has been able to reach are just another of 2018's reminders that Netflix's importance in the film industry is quickly rising. While the streaming platform has lightly explored the prospects of theatrical release of its original films recently, Netflix ought not to forget that its true power rests in its ability to reach subscribers in the comfort of their own homes, and the popularity of Bandersnatch, irregular format and all, perfectly exemplifies this. Without its interactivity, Bandersnatch would likely have never been propelled into the spotlight it enjoys now, but the very thought of a theater audience frequently brandishing their too-bright smartphones on public wifi at a theatrical screening of the film should be enough to send a shiver up any moviegoer's spine.

More: Black Mirror: Bandersnatch's Post-Credits Ending - What Happens & How To Get It