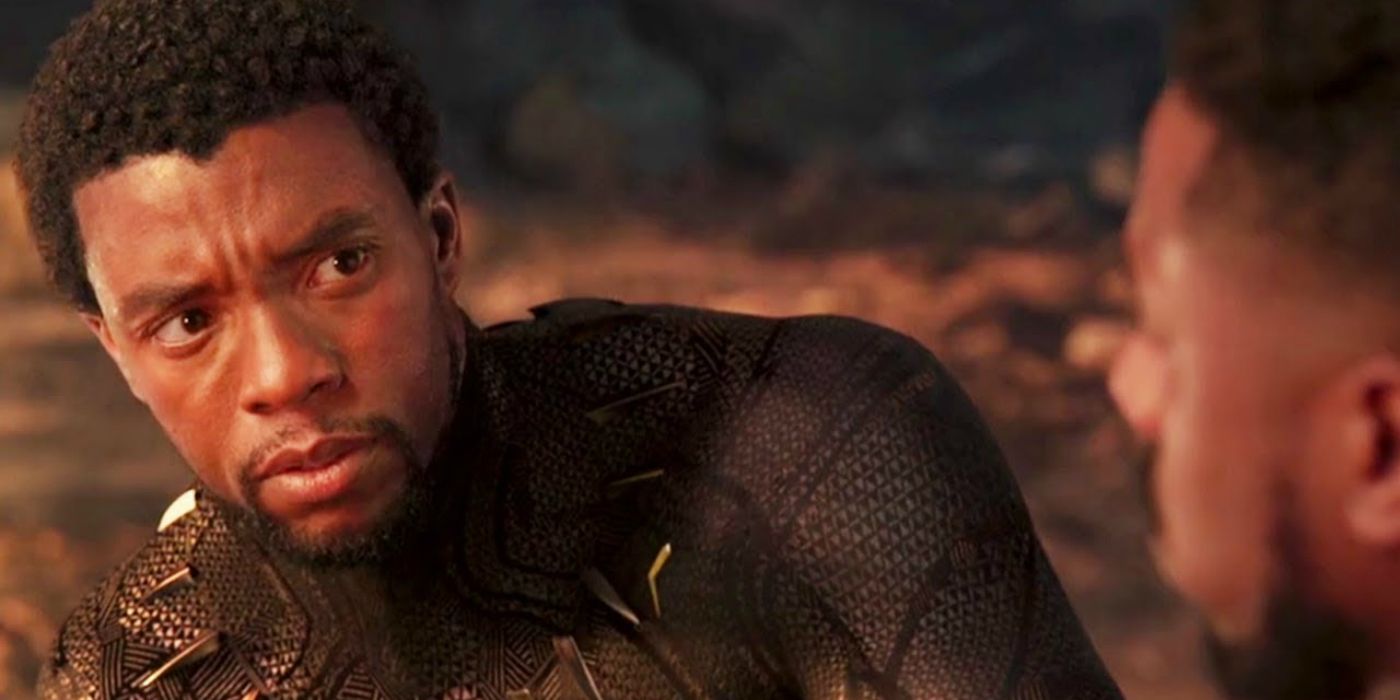 Editor Michael Shawver details the original ending planned for Black Panther, and how it's different from what fans watched in the theater. It's been almost a year since Marvel Studios rolled out the Ryan Coogler-directed flick starring a predominantly African-American cast, led by Chadwick Boseman as the titular character. But fans continue to learn new things about the critically-acclaimed effort that's currently gunning for an Oscar nod, the latest of which centers on its original final scene.

One of the most successful, not to mention important films in the Marvel Cinematic Universe, Black Panther  officially introduced fans to the advanced African nation of Wakanda and its people after they got a tease in 2016's Captain America: Civil War. It's no secret that the ending for Black Panther evolved overtime, with the movie at one point capping off with the United Nations scene that saw T'Challa open up Wakanda to the rest of the world. But as it turns out, there was a much earlier version of the film that ended with Erik Killmonger's (Michael B. Jordan) death in the African nation.

Speaking with Cinema Blend, Shawver detailed what the original ending for Black Panther was supposed to be. Apparently, the film was supposed to end with the scene of T'Challa and a dying Killmonger watching the Wakandan sunset, albeit with a different dialogue exchange. While the latter's lines were powerful, it posed some problems in closing both his and his cousin's respective arcs in the movie.

"With reshoots Ryan wanted to do a new ending, and it's a whole bigger thing with the scene where Killmonger dies... What we shot originally, and in the script, was Killmonger saying 'It's beautiful, but what are you going to do for everybody in the world who can't see this?'... And it was great. It was powerful, it was awesome, but it was problematic for a few reasons. One, we realized that just as a character, for the journey of T'Challa, he can't get the answer to the movie and what he needs to do from the villain - like straight-up exactly what he needs. And that's kind of what was happening. Secondly, it was a great performance, and [Michael B. Jordan] brought it, and it was painful to watch because you kind of don't want this guy to die, but it didn't fit his character."

Shawver continued by sharing how the ending of the film's theatrical release came to be, which featured T'Challa surprising Shuri (Letitia Wright) by placing the new Wakandan outreach building in the same place that N'Jobu (Sterling K. Brown) and a young Killmonger lived. The idea to cap Black Panther off exactly where it started was inspired by the ending of Francis Ford Coppola classic The Godfather.

"Ryan went off in his lab and did his brilliant work that he does as a writer, and wrote the final scene in Oakland where he goes with Shuri and shows the Royal Talon fighter to those kids, and specifically a kid that kinda looks like a young Killmonger. Basically, him showing them that, and buying those buildings, and the Wakandan Outreach Program was in spirit what originally we had Killmonger tell him. 'If people can just see this. If people can see their own potential then things would be different.' And so that was done in a new scene where we see what T'Challa has done. And then at the very, very, very end, the last line is that kid looking at him and saying, 'Who are you?' And that is the theme of the movie, of identity. Who are you? And he doesn't need to answer it, because he just answered it for us."w

Both versions of the ending were powerful, and would've serviced the story that came before it in their own ways. The scene with T'Challa and Killmonger was one of the most emotional moments in the film, especially after the latter finally let his guard down and reminisced about how his father used to talk about the sunset in Wakanda. That said, it was also the perfect springboard to what Black Panther's final scene ended up being, as it highlighted the fact that Killmonger had a point. His actions were flawed, but at the end of the day, he had the right idea in mind. Seeing T'Challa realize that his cousin was correct, as well as atone (in his own way) for the mistakes of his forefathers was powerful. It was also indicative of the kind of king he'll be moving forward.