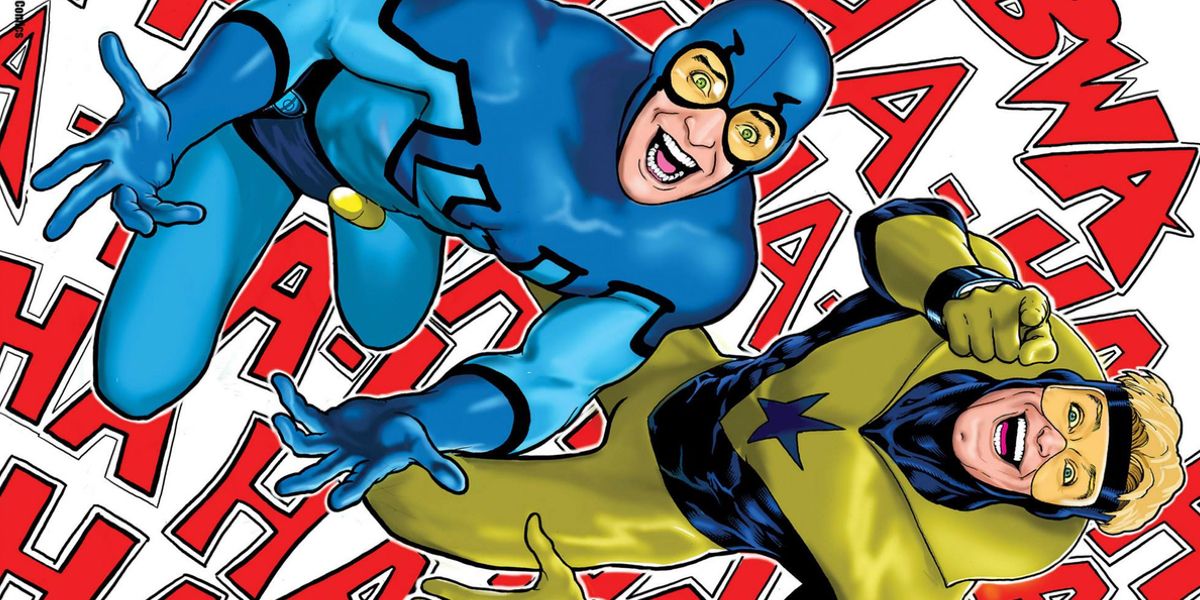 Booster Gold is reportedly going to make an appearance in DC Comics' upcoming Blue Beetle movie. Blue Beetle is one of DC's many in-development projects and it's only in the very earliest of stages. The movie was first announced in late 2018. According to reports the film will focus mainly on the second Blue Beetle from the comics - the young teenage Jaime Reyes. Reyes, however, will be trained by the original Blue Beetle and captain of industry Ted Kord.

It is through Ted Kord that Booster Gold might make his appearance. Kord and Booster Gold, otherwise known as Michael Jon Carter, have a long-running partnership in the comics. The two even starred in their own comic series Blue & Gold. They're a bit of an odd couple with Booster Gold being a time-traveling disgraced athlete from the future and Ted Kord being a tech guru turned superhero. Their's is a goofy friendship that could be coming to the DCEU, fully cementing DC's journey from a grim dark movie universe to something much more light-hearted.

Related: Arrow's Stephen Amell Says He Auditioned for Booster Gold "Way Back When"

Booster Gold's involvement in Blue Beetle comes courtesy of Geeks Worldwide. The online publication claims that "multiple reliable sources" have informed them that Booster Gold has a small role in the Blue Beetle film. Booster's involvement should still be considered a rumor. This is not only because so little is known about Blue Beetle to start, but also because development is in its very early stages. Even if Booster is a firm part of Blue Beetle, plans currently could easily change when/if the movie gets close to release.

However, Booster Gold appearing in Blue Beetle (and the DCEU at large) does make quite a lot of sense. Neither Blue Beetle and Booster Gold are household superhero names. Of the two though Booster does have more name recognition. Booster first appeared in 1986 and has grown in popularity in recent years. It's Booster Gold, along with Harley Quinn, who is at the center of DC Comics' current event storyline / murder mystery Heroes in Crisis.

The DCEU has also seen a lot of critical and commercial success by focusing on less popular heroes like Wonder Woman and Aquaman. There's less mainstream expectation in what a movie starring a lesser known superhero movie should resemble. With DC's huge heroes like Superman and Batman, they'll always be compared to what came before them in the cinema. With a character like Booster Gold, DC and Warner Bros. would have even more freedom than Aquaman and Wonder Woman.

This rumor isn't the first time that Booster Gold has circled DC Comics' movie plans either. The executive producer of The CW's DC Comics superhero shows from Arrow to Legends of Tomorrow, Greg Berlanti, was announced to be working on Booster Gold movie in 2016. That project was rumored to also include an appearance by Ted Kord's Blue Beetle. Since that initial announcement, news about the movie has gone cold. However Berlanti did reveal in a recent interview that the script is finalized and the movie is still "in development." While there were reports that Berlanti's Booster Gold movie would be set outside DCEU's continuity similar to Joaquin Phoenix's Joker those plans could have changed. Blue Beetle could become a sequel or even "prequel" for Berlanti's Booster Gold script.