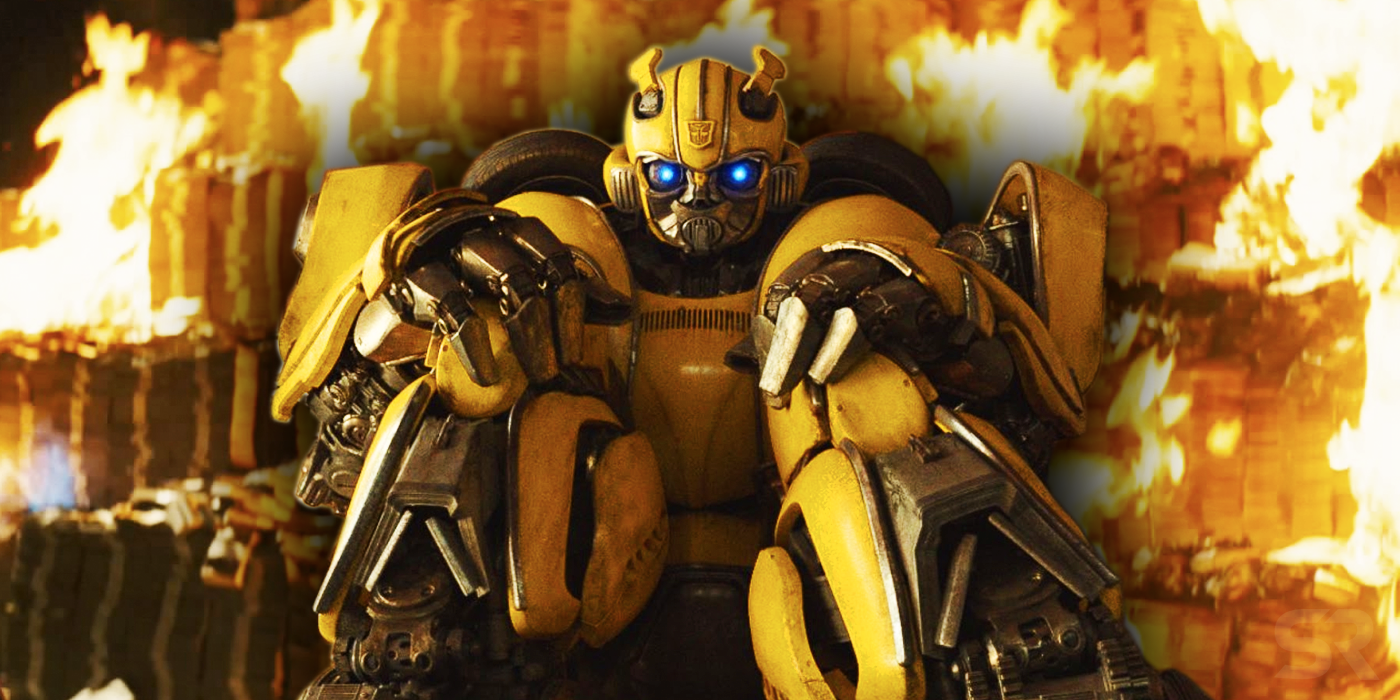 Bumblebee turned a profit and will ultimately go down as a minor box office success, though its performance still raises questions about the future of the Transformers film franchise. After Michael Bay captained the ship for five movies released over a period of 10 years (culminating with the lackluster The Last Knight in 2017), Paramount opted to go in a different direction for the next film on the docket. For spinoff Bumblebee, they not only went back in time to the 1980s, but also recruited Kubo and the Two Strings director Travis Knight to call the shots. The hope was that Knight would be able to inject some genuine heart and emotion into the series, revitalizing it in the process.

Based on Bumblebee's critical reception, Knight very much accomplished that goal. The spinoff is far and away the best reviewed installment of the franchise and even received the Certified Fresh seal of approval. While the word-of-mouth was fantastic, it didn't seem to have much of an impact on the film's box office prospects. Opening in theaters at the same time as Spider-Man: Into the Spider-Verse, Aquaman, and Mary Poppins Returns, Bumblebee fell behind and got lost in the glut of Christmas releases.

Bumblebee is the Lowest-Grossing Transformers Film

Despite being subject to widespread critical panning, the Transformers movies were a reliable cash cow for Paramount early in the franchise's run. Derided 2009 entry Revenge of the Fallen earned $402.1 million domestically, and both Dark of the Moon and Age of Extinction grossed $1 billion worldwide. With those kinds of returns, it's no wonder the studio kept bringing Bay back to make more. Whatever the faults of the director's Transformers installments were, they obviously worked for audiences, who kept flocking to the theater to see what outrageous action Bay staged next. But things changed when The Last Knight came out two summers ago.

When Bay's fifth Transformers hit the scene, the cracks finally started to show. At the time, it was the worst all-around performer in the series, no matter which way you sliced it. Its domestic opening weekend ($44.6 million) couldn't hold a candle to the 2007 original ($70.5 million); it earned $130.1 million total in the United States when Revenge of the Fallen made $108.9 million in a single weekend; and its global haul of $605.4 million was $104.3 million less than the original - and that was with inflation and 3D/IMAX premiums. The Last Knight ultimately ended up in the black, but it was clear the formula needed to be reworked. Viewers didn't respond to Bay's approach as strongly as before, and the damage done by The Last Knight likely (and unfortunately) reverberated into Bumblebee.

The budgets of the two projects make it more of an apple-to-oranges comparison, but Bumblebee fared worse than The Last Knight across the board. Its domestic debut of $21.6 million was lower than other 2018 offerings like Tomb Raider ($23.6 million), Maze Runner: The Death Cure ($24.1 million), and The Predator ($24.6 million). It has earned only $108.9 million in the States as of this writing (the exact figure Revenge of the Fallen pulled in its first three days), and the $367 million worldwide gross is behind Fifty Shades Freed ($371.9 million), Solo: A Star Wars Story ($392.9 million), and A Star is Born ($404.2 million). Nothing against Bradley Cooper's Oscar frontrunner, but few would have predicted a remake of a romantic musical drama (even one starring Lady Gaga) would outgross a Transformers movie globally. This turn of events is quite shocking.

Transformers has always done exceptionally well overseas, particularly in China (the saving grace for many woebegone tentpoles). Even The Last Knight earned $228.8 million in the Middle Kingdom, but Bumblebee had no such luck. Currently, the spinoff has made a paltry $59 million in China, which can likely be attributed to Aquaman dominating the multiplex over there. The latest from DC grossed $284.9 million from Chinese theaters, earning a rare extension in the process. Bumblebee simply couldn't compete with that and had to make do with the loose change it could find. There's now a cloud of doubt hanging over what was once Paramount's go-to cinematic property. If Transformers is to march forward, some serious changes need to be implemented.

Page 2: What Paramount Can Learn From Bumblebee's Box Office

The good news for Paramount is that Bumblebee was not a total loss. Because its production budget was a very manageable $135 million, its break even point was roughly $270 million. It's clearly passed that at the worldwide box office, turning a $97 million profit based on ticket sales. That margin will definitely expand once ancillary revenue like home media sales comes into play (and, to be fair, Bumblebee still playing in theaters), but these results are hardly what Paramount was looking for. $97 million wouldn't be enough to cover the costs of the hypothetical Bumblebee sequel the studio is interested in, so if that followup does indeed move forward, the studio has to rethink their strategy a bit.

Since Bumblebee received positive reviews and was well-liked by those who saw it, it's safe to say the spinoff fell victim to an awful release date. Paramount's desire to have a holiday blockbuster in the first Star Wars-less December since 2014 is perfectly understandable, but the multiplex was way too crowded this year. Aquaman (which targets largely the same demographic) opened in theaters on the same day as Bumblebee, and Mary Poppins and Spider-Verse were also there as options for families. As evidenced by The Last Knight, general viewers were beginning to tire of Transformers movies, which put Bumblebee at a disadvantage. Yes, Justice League didn't break any records and caused Warner Bros. to drastically shift the entire DC Extended Universe, but at least Aquaman represented something new. There had never been an Aquaman movie before, and its trailers promised breathtaking spectacle. Much like Solo, promotional materials for Bumblebee did little to showcase why this was a must-see on the big screen. It never felt like an "event," even as the good reviews piled up.

Related: Bumblebee Is A Much Better Remake of the Original Transformers

Perhaps smartly, there currently are no upcoming Transformers movies officially scheduled on Paramount's slate. Transformers 6 was supposed to come out this year, but the studio ultimately pulled it before any real headway was made (most likely due to The Last Knight's gross). The wise thing to do would be to move ahead with the Bumblebee sequel, but make sure to put it in a position where it can thrive. Paramount needs to find a less competitive window for it so it can post a healthy gross and help the property return to form. If summer or the holidays are too crowded, it would behoove Paramount to think outside the box. Black Panther shattered records in February. Captain America: The Winter Soldier earned $714.2 million worldwide in April. Audiences have shown they'll come support a good film no matter what time of year it premieres. Should the Bumblebee sequel have the marketplace to itself, it ideally will perform better. If not, then it might be time to let Transformers rest.

One thing's for sure - Paramount should absolutely bring back the creative team of director Knight and writer Christina Hodson, both of whom have ideas for where they want the sequel to go. They do not deserve any of the blame for why Bumblebee came up short at the box office. They did their job extremely well and delivered a film reminiscent of old school Amblin productions bursting with a big heart. Usually, when a movie struggles at the box office and becomes a catalyst for changing things, it's because a new artistic voice is needed to reinvigorate things. Bumblebee's disappointment is more on the studio. They lucked into a winning combination, and Knight & Hodson deserve a second chance at legitimate success. Hopefully, Paramount doesn't drop the ball again.

Bumblebee is a pretty interesting box office case. It's by no means a bona fide flop (Paramount didn't lose money on it), but it isn't a runaway smash either. The spinoff falls into the tricky middle ground where the studio needs to proceed with caution moving forward, or else they'll potentially lose a tentpole. Paramount is in dire straits when it comes to blockbusters (remember, Star Trek 4 was just cancelled), so fingers crossed they figure something out.

More: Movie Franchises That Got Better In 2018