The Worst Avengers Storyline Gets Atoned For By Captain Marvel 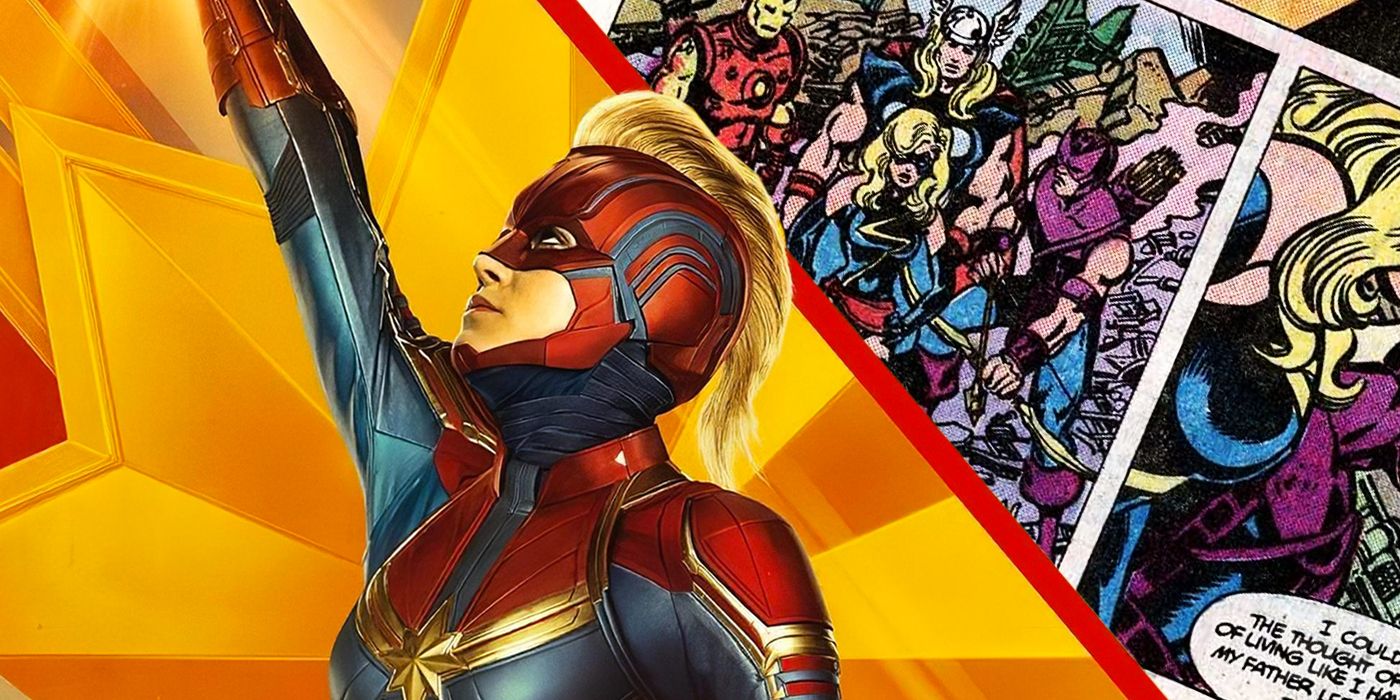 The upcoming Captain Marvel movie looks set to atone for what's probably the single worst story in the history of the Avengers. The film is loosely drawn from the comics, clearly partly inspired by Kelly Sue DeConnick's iconic run. Set in 1995, it will introduce the MCU's most powerful superhero to date, a hero who can reportedly even travel in time.

This is a big step for Marvel Studios, the first female-led superhero movie in the entire MCU. Hollywood had been traditionally been skeptical about female superhero flicks, with insiders pointing to flops like Supergirl, Catwoman, and Elektra; but the success of Wonder Woman back in 2017 shattered that particular glass ceiling, proving that these films can be blockbuster hits. Captain Marvel is then expected to play a major part in Avengers: Endgame, summoned to Earth by Nick Fury in the post-credits scene of Avengers: Infinity War. And from there, it's believed she'll be a central figure in the MCU's future.

It's tempting to assume Captain Marvel will get its cultural relevance purely from the fact it stars a woman. In reality, though, it looks as though this hotly-anticipated blockbuster will have a far sharper edge to it than had initially been expected - and that's because it atones for one of the worst stories Marvel Comics ever published.

The worst story in the history of the entire Avengers franchise was told in 1980's Avengers #200, a supposed milestone credited to writers Jim Shooter, David Michelinie, Bob Layton, and George Pérez; unsurprisingly, none have ever stepped forward to admit that they're responsible for the plot. In fact, back in 2011, former Editor-in-Chief Jim Shooter published a blog post in which he admitted he agreed with the consensus that this is an awful comic, but had no memory of how it came to be so bad. "I guess I signed off on this book," he observed. "I regret it."

The plot of Avengers #200 is, frankly, a bizarre one. The story opens with Carol Danvers about to give birth to a child. She has absolutely no idea who the father is, but the entire pregnancy has taken place over just a few days. When the baby is born, it grows to adulthood at an insane speed, and reveals that it is really a cosmic entity called Marcus. Feeling lonely, Marcus decided to woo Carol, and so summoned her into his "Limbo" dimension. There, he did everything within his power to earn her affection; to aid his purposes, he summoned others from Earth's history to help. Shakespeare wrote Carol a sonnet, Beethoven an original prelude in her honor, and Marie Antoinette clothed her in the finest satins and silks. After weeks of effort - with a boost from mind-altering machines left behind by Marcus' father Immortus - Carol consented, and Marcus had sex with her. He then sent her back to her own time, erasing all memory of what had happened, and planted his own consciousness within the fetus.

It's an insane story, not least because it basically means Marcus is his own father. But it's also deeply disturbing, because there's only one word that can be used to describe it - rape. According to Marcus, he summoned Carol and trapped her in his own environment, exerting incredible effort to woo her - and she was unwilling. He had to use technology to adjust her mind and make her consent to have sex with him. What's more, Marcus' words are absolutely shocking; "Finally," he observed, "After relative weeks of such efforts - and, admittedly, with a subtle boost from Immortus' machines - you became mine." Note the possessiveness in his wording; it really is amazing this got signed off in Marvel, let alone approved by the Comics Code Authority.

And it gets worse. Because Marcus was an extradimensional entity, his presence began to cause disruption in the very fabric of reality itself. He would have to return to Limbo; but Carol, confused because of the various emotions she felt for him, decided to go with him. Not only did the Avengers not object to this - nobody raised the question of whether or not she was in her right mind - they actually celebrated it, and Thor was the one who transported Marcus and Carol Danvers back to Limbo. Needless to say, things didn't turn out well; Marcus had erred, and he aged at an accelerated date and died within a week. Carol was trapped in Limbo for some time but eventually managed to get back to Earth; she confronted the Avengers in Avengers Annual #10, where writer Chris Claremont had her call out the Earth's Mightiest Heroes.

By now, it's clear that this year's Captain Marvel movie will explore themes of abuse. The MCU version of Captain Marvel is an amnesiac who believes herself to be a Kree, a member of the elite Starforce unit. Given it's now pretty much certain that Jude Law is playing the villainous Yon-Rogg, it's not hard to deduce that the Kree have manipulated her memories in order to turn Carol Danvers into a powerful weapon in their war against the Skrulls. What makes this all the more interesting, though, is that the Kree have been described as a race who value honesty and despise manipulation and low cunning. According to Jude Law, that's the whole reason the Kree hate the Skrulls.

Although Captain Marvel is set in 1995, it's a story aimed at modern audiences. Frankly, this plot seems reminiscent of the #MeToo movement; people in positions of authority, who are supposed to have a degree of integrity, exercising their power over a woman in subtle and manipulative ways. One scene in the trailers fairly screams out this theme, with Jude Law's character training with Captain Marvel, and telling her she's not as powerful as she thinks she is. He's seeking to diminish the hero, using his position as her commanding officer to prevent her from realizing her true potential. This can only be considered abuse. Of course, at this stage it's unclear quite how far the abuse will go; there's been some speculation the relationship between Yon-Rogg and Captain Marvel won't be limited to an officer and his soldier, but so far there's no evidence to support that idea.

How Captain Marvel Atones For Avengers #200

There are basic similarities between the Kree's actions in Captain Marvel and Marcus' in Avengers #200. It's true that the Kree and Marcus have very different motives - Marcus basically seems to have wanted to have sex, while the Kree want a weapon for their Skrull war. But both stories are essentially tales where powerful beings exercise that power in order to force a woman to do their will. Both Marcus and the Kree are only interested in Carol Danvers because of her own abilities; Marcus chose her because he believed her unique physiology was a strong one, while the Kree wouldn't be interested in Captain Marvel if she had no superpowers. And both claim a powerful woman as their possession; Marcus calls Carol "mine," while the Kree brainwash her and work to ensure she knows her place. These are two different tales of abuse.

The comics themselves have often tried to forget that Carol Danvers was a victim of abuse, and that's led to some surprising omissions. When Captain Marvel's best friend Spider-Woman got pregnant, for example, Carol never mentioned that she understood what some of that felt like; it's as though the entire pregnancy has been air-brushed out of comic book history. But Marvel Studios is choosing to accept, and even embrace, the idea that their version of Captain Marvel is an abuse victim. That's quite a bold decision, as it will inevitably involve Marvel exploring just what it means to realize someone has been abusing you by exercising power over you; Captain Marvel will have to deal with the emotional trauma of all that she's suffered. This may well explain why Brie Larson - a prominent figure in the #MeToo movement - was interested in the role. There's a strange sense in which this atones for Avengers #200, with Marvel Studios consciously exploring themes that the comics - back in the 1980s - just couldn't quite handle.

How This Makes Captain Marvel Better In The MCU

Captain Marvel is the first female-led superhero movie in the MCU, which makes it pretty ground-breaking, but the abuse plot gives it a far more significant degree of cultural relevance. Marvel appear to have learned an important lesson with the success of Black Panther; they know there's a demand for superhero stories that are more than just standard action flicks, but that instead confront the social and cultural issues of the day. Although Captain Marvel is set in 1995, it looks set to explore themes of powerful women being diminished, of men in positions of power abusing their authority; it essentially tackles the issues raised by the #MeToo movement. That makes this a very exciting film indeed.

But Captain Marvel is more important than that. The film is releasing at a time of transition for the MCU, with Avengers: Endgame expected to be the swan song for several of the original Avengers. Stars like Robert Downey, Jr., Chris Evans, and Chris Hemsworth are thought to be leaving Marvel, meaning the torch will be passed on to a new generation of heroes. And, according to Kevin Feige, Brie Larson's Captain Marvel will be taking the lead in the MCU going forward. That means, when the dust settles from Avengers: Endgame, an abuse survivor will be at the heart of Marvel's shared cinematic universe. It's a remarkable decision from Marvel, and it indicates that the studio intend their films to retain that edge of cultural relevance from this point on.

It also means Captain Marvel will be a fascinating, three-dimensional character. She has strength, but she knows what it's like to be vulnerable. She has power, but she's been at the mercy of powerful beings who would take advantage of her. And though she has been abused, she's sure to refuse to let that experience define her, and will blaze her own trail - whether Yon-Rogg and the Supreme Intelligence like it or not.