« Battlefield V Player Visibility Issues Hilariously Exposed by YouTuber
Aquaman’s Post-Credits Scene Has A Flashpoint Tease: What It Means For The DCEU » 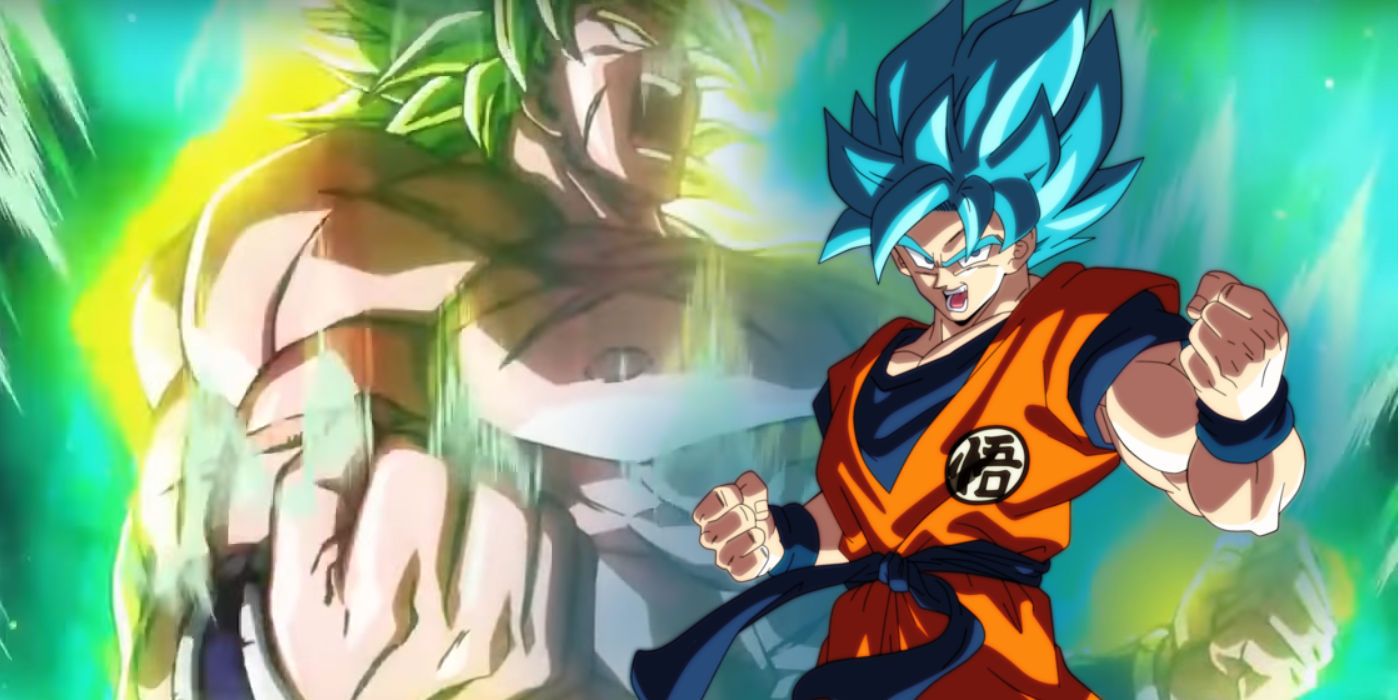 Dragon Ball Super: Broly, the latest creation from Akira Toriyama and the team of animators at Toei Animation, recently released in theaters across the US after rising to the top of the Japanese box office, but the film's ending left some fans scratching their heads. Despite the rather straightforward premise of the movie, Dragon Ball Super: Broly steered the Dragon Ball franchise into some uncharted waters.

Dragon Ball Super: Broly picks up just after the conclusion of the Dragon Ball Super anime series. Goku and friends are fresh from the Tournament of Power, a fighting tournament organized by Zeno, the ruler of the twelve universes that make up Dragon Ball’s multiverse. Having preserved the existence of the multiverse by winning the tournament, the heroes relax at a resort, playing near the ocean and, of course, training. Vegeta and Goku’s sparring session grinds to a halt when they discover that Frieza has plans to use Earth’s Dragon Balls to make a wish. A wrench is thrown into Frieza’s operation when he encounters Paragus and his son, Broly - Saiyans stranded on the hostile planet Vampa for decades. Altering his plan to see how strong Broly, a supposed Saiyan prodigy, might be, Frieza arranges for the warrior to come into conflict with Goku and Vegeta – and then the fight begins.

Right from the beginning, Broly is on a completely different level from his first opponent, Vegeta, even holding his own in an unpowered state when facing off against Vegeta’s Super Saiyan form. The power of both combatants continues to rise as they fight, Broly learning with every passing punch. Near the end of Dragon Ball Super: Broly, Broly has decimated not just Vegeta, but Goku as well, both in their strongest Super Saiyan forms while seemingly only in a variant version of Super Saiyan himself. That’s when Goku and Vegeta fuse into Gogeta and manage to turn the tide of battle. However, the fight reaches no decisive conclusion as the Dragon Balls are used to instantly transport Broly back to Vampa.

The final act of Dragon Ball Super: Broly ratchets up the power scale to such a degree that near the end of the conflict Broly and Gogeta nearly break the universe. Their blows become so powerful that they rip a hole in the fabric of space-time, sending the battle into a strange, multidimensional space that fans haven’t been able to identify. When the energy blasts and fists stop flying, Broly receives a visit from Goku to provide him and his allies with homes and supplies to make living on Vampa tolerable. The two fighters end Dragon Ball Super: Broly on good terms with Goku turning to say goodbye, saying, “I’m Goku. But Broly, you can call me Kakarot,” thus giving his adversary both his Earth name and also his lesser used Saiyan name.

All of that leaves the audience with an abundance of questions. How was Broly even capable of producing such potent feral power? He’s shown able to hold his own against Super Saiyan Blue versions of both Goku and Vegeta. Even Jiren, the final combatant of the Tournament of Power, paled in comparison to the overwhelming strength Broly demonstrated. What exactly was that otherworldly dimension glimpsed toward the end of the film? We’ve never seen it, but it might hint at a larger multiverse than we have known up until this point. And, now that the Super anime has ended and the fate of animated Dragon Ball remains undecided, where will the series go and will that future include Broly’s return?

Dragon Ball Super: Broly takes place during an interesting period in Dragon Ball canon. Dragon Ball Super as an anime series seems to be done for now with the conclusion of the Universe Survival Arc. The manga for Super hasn’t finished the next arc quite yet, either. However, with ideas from Dragon Ball GT, the ongoing and limited release of the Super Dragon Ball Heroes spin-off, and the manga popping up, a plethora of great stories and concepts continue to float around for the core series to use to its advantage. From the Oozaru Great Ape transformations to space criminals to straight up sorcery, the answers surrounding Dragon Ball Super: Broly’s most pressing questions get pretty crazy.

What Dragon Ball Super: Broly Means For The Future Of The Anime Series

Dragon Ball as a franchise focuses on examining people who hit their limit and don’t give up, finding it within themselves to go beyond and rise to any challenge. That sort of approach comes with some inherent risks in anime, such as power creep, where the protagonist becomes so powerful that the dramatic tension bleeds out of the series. Dragon Ball Super’s conclusion with Goku and company literally saving the multiverse left many fans wondering how the series could continue. Where can a series go once our heroes have triumphed over the best fighters of all 12 universes?

Dragon Ball Super: Broly tackles this problem while sticking with the theme by giving Goku and Vegeta an antagonist who can compete with them on their level, throwing into doubt their victory. Cleverly, this accomplishes two things. First, it preserves the dramatic tension that might otherwise have been lost. Seeing Vegeta get punched through several mountains while in the most powerful Saiyan form we’ve seen him achieve has that effect. Second, Goku - and, by extension, the audience - realizes that there are still stronger beings in the Dragon Ball universe. Numerous times in the series we see and hear about entities that are capable of bringing down Dragon Ball’s various deities. Beings like that still roam the multiverse or lurk on its fringes, much like Broly. Despite winning the Tournament of Power, Goku knows that he has to keep surpassing his limits to both better himself and get ready for the bigger fights to come.

Page 2 of 2: How Broly Is So Strong & Where Dragon Ball Super Goes Next

How Is Broly So Strong?

That brings us to how Broly was so strong and where Goku might turn to find that new strength. In the early minutes of Dragon Ball Super: Broly, we see Broly’s initial arrival on Planet Vampa and he has a tail. Tails are very important to the Saiyan species and having one allows them to access a werewolf-like transformation to become an Oozaru, a colossal ape-like creature. In that form, their strength increases exponentially. However, when we see Broly later in Dragon Ball Super: Broly, he has lost his tail, likely due to an intervention by his father, Paragus. Despite that loss, Broly remains a formidable fighter in part because he happens to be one of the strongest Saiyans by fluke of his genetics, but more importantly because he has learned to channel the Oozaru powers within himself to exponentially increase his own fighting potential.

Can Goku or Vegeta also harness their inner Oozaru to fight? Interestingly, the answer to this might lie in the largely retconned Dragon Ball GT and the Super Saiyan 4 transformation. Originally introduced in Dragon Ball GT, the only way to access the fourth level of Super Saiyan power is to transform into a golden Oozaru and maintain conscious control over the typically berserk form. However, since the characters in Dragon Ball have largely lacked their tails since midway through the Dragon Ball Z series, it was thought that the form has become inaccessible or had been relegated to the non-canonical Dragon Ball video games and spin-offs. However, Dragon Ball Super: Broly offers a new path forward for a reworked version of the transformation if other Saiyans can find a way to master the technique Broly developed after a lifetime of fighting for survival on Vampa.

The rift in space-time that Broly and Goku create could be a hint at where things might go for future films or future additions to the anime series. We know there’s a multiverse out there from Dragon Ball Super, but we also know that the multiverse used to be bigger than it is now until several were wiped out at the will of Zenos, the Omni-King. It’s quite possible that there are vast parts of the multiverse that could harbor dire threats against Dragon Ball’s home universe, Universe 7. We also know from past story arcs that there are beings out there capable of killing Dragon Ball gods, which could very well disturb the balance of the universe. To throw a truly crazy idea out there, it’s possible that the universes erased by Zenos remain in some form and who knows what that could mean? Whether it comes down to other dimensions or plain old Universe 7 space, Dragon Ball’s future seems to be waiting out among the stars.

Related: Dragon Ball: 10 Characters Stronger Than The Gods Of Destruction (And 10 Way Weaker)

What Lies In Store For Dragon Ball Super

The ongoing Dragon Ball manga from Toriyama backs up everything. Following the section of the manga that deals with the events of Dragon Ball Super: Broly, Goku and Vegeta dragged into an operation by the Galactic Patrol, an organization dedicated to keeping the galaxy safe from those who might harm or destroy it. For the past 10 million years, they have guarded an extremely potent sorcerer known for consuming the life force of entire planets named Planet-Eater Moro. Moro stands as a fairly formidable fighter on his own after having absorbed the lives of vast swaths of the galaxy. He also happens to be able to wield magic more potent than many of the gods that oversee the workings of the universe. To put it more plainly: Moro is so powerful that the gods sentenced him to death but no one had enough power to kill him. It’s very possible that Moro and the exploits of the Galactic Patrol will be where the next film or anime series takes viewers.

One of the biggest changes made to the character of Broly in Dragon Ball Super: Broly is his relationship with Goku by the end of the film. Instead of being an enemy that Goku believes has been destroyed, Broly and Goku see one another as equals and friends. This opens up a number of interesting possibilities going forward. If we take the manga as an indication of where things will go in the potential continuation of Super or the beginning of a new Dragon Ball series altogether, Broly coming back as a recurring member of the cast as either a trainer or an ally in battle could be really interesting. While most fans are accustomed to only seeing Broly only in films, his canonization by Toriyama in both the manga and film leaves his appearance in a future anime adaptation a very real possibility.