Every Clue To The Good Place’s Points System Twist 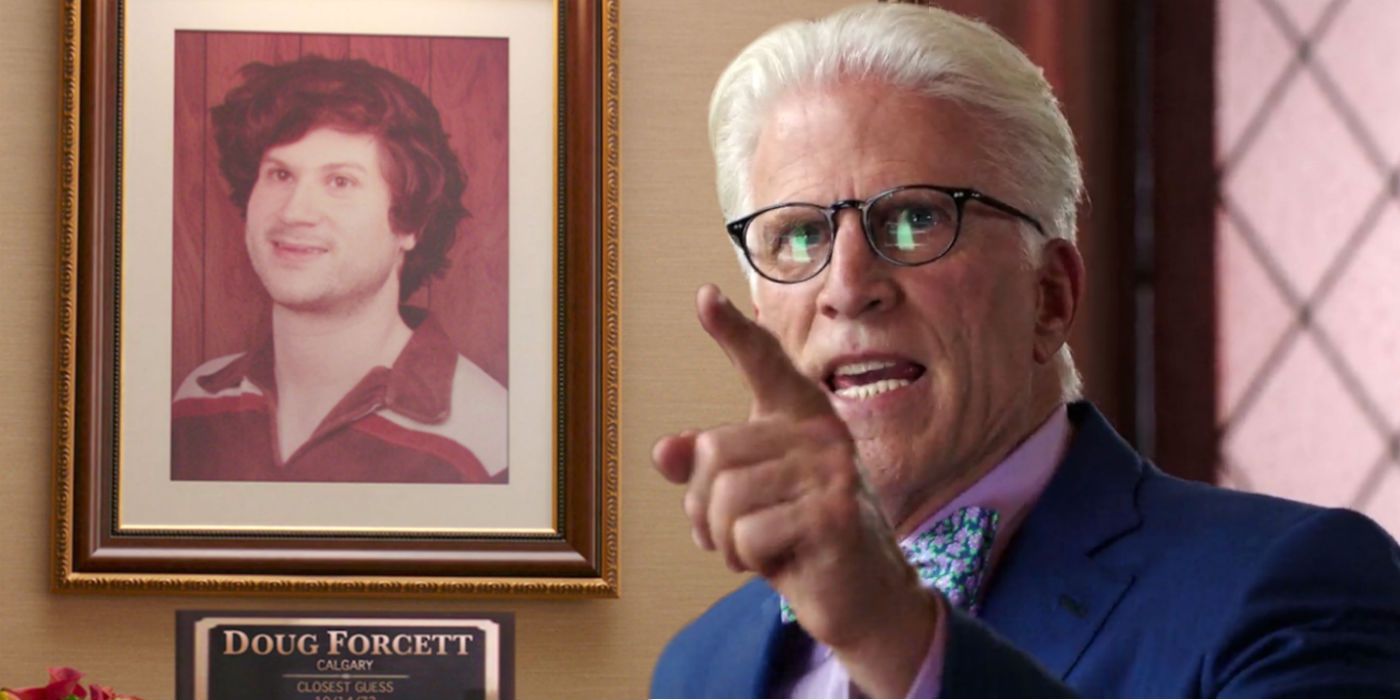 With the return of The Good Place season 3 in "The Book of Dougs," we finally have an answer to the question of why no one has gotten into the Good Place in more than 500 years: the world - and morality - has simply become too complicated. Actions that might have once been wholly positive, like giving one's grandmother a bouquet of flowers, now come with a litany of unintended consequences (like accidentally putting money into the pockets of an unscrupulous billionaire CEO), because human civilization is now so enormous, interconnected, and complex.

While this is merely the latest big twist in a series full of big twists, it definitely didn't come out of nowhere. Over the past two and a half seasons, The Good Place has been building up the idea that getting into the Good Place is impossibly difficult, and dropping clues as to why.

Tahani and Chidi Being Sent To The Bad Place

Eleanor and Jason may be (to borrow one of Eleanor's favorite phrases) trashbags, but there has always been something a little off about the fact that Tahani and Chidi didn't get into the Good Place. Tahani may be stuck-up and self-centered, but she still raised billions for charities and undoubtedly had an immensely positive impact in the world. She assumed that all of that was invalidated simply because her intentions were impure, and this was confirmed when, in "The Book of Dougs," Michael looks at a sample Doug's file and "well-intentioned" is one of the factors in deciding whether or not an action was good.

Then there's Chidi, who dedicated his entire life to agonizing over the finer points of ethics - to the point that he found himself wracked with indecision over the simplest decisions. His situation was the polar opposite of Tahani's: his intentions were good, but the results of his indecision were bad, causing misery for everyone around him. The dichotomy between the two characters was one of our first introductions to the idea that you're damned if you do, and damned if you don't.

In every season of The Good Place so far, Chidi has taken it upon himself to give Eleanor, Tahani, and Jason (and sometimes Michael) lessons in the complex matter of moral philosophy, and in doing so has driven home the point over and over again that being good and doing good things isn't anywhere near as straightforward as it sounds. From the tricky matter of the Trolley Problem to musings on moral relativism, the show's main message is that being a good person isn't as easy as it sounds.

There's a recurring joke in The Good Place where Chidi decides that he must have been sent to the Bad Place for drinking almond milk even though he knew it was bad for the environment... and as it turns out, he wasn't exactly wrong. While on a surface level there's nothing especially immoral about drinking almond milk, the almond milk is a perfect encapsulation of the fact that the simplest act can have negative consequences - in this case, harming the environment. If even adding almond milk to your coffee can cause your points total to take a hit, it's little wonder that no one is making the cut.

Henry In The Hospital & Blueberry Muffins

After being resurrected, Chidi was given a new lease on life and began being much more decisive - easily selecting a blueberry muffin from a coffee vendor, and advising his friend Henry to stop putting off getting into shape. Unfortunately, Henry's decision to go to the gym landed him in hospital with horrifying injuries, and to make matters worse, a nurse informs Chidi that the migrant workers who pick blueberries for the muffins are horribly mistreated. Yes, even actions that appear outwardly good - encouraging a friend to look after their health, and bringing them a gift in the hospital - resulted in a hit to Chidi's point total.

The Humble Life of Doug Forcett

The clue that finally tipped Michael off to the fact that something wasn't right with the points system was discovering that Doug Forcett, the only human to ever get close to correctly guessing how the afterlife works, wouldn't be getting into the Good Place despite leading a painfully careful life. Somehow, despite living in near-total seclusion and being afraid to so much as step on a snail, Doug still earned enough negative points to doom him to the Bad Place.

Watch "The Book of Dougs" carefully, and you'll see that the entire episode builds up to the big ending reveal. While the four humans kill time in the Good Place Correspondence Building, they all try to do good things (well, except Eleanor, who instead attempts to break down the door to the Good Place by throwing a lamp at it). Tahani tries to help Jason and Janet sort out their feelings for one another - first by encouraging Jason to talk to Janet, and then by ending her marriage to Jason - but finds that everything she does just makes things worse. Meanwhile, Chidi puts on a postal uniform to entertain Eleanor, but ends up making her cry instead.

The biggest clue of all, however, comes when the Good Place committee declare that they plan to spend 400 years deciding who will be part of their investigative team, and one explains, "We're the good guys, we can't just do stuff." Even the people who run the Good Place are effectively paralyzed by the difficulty of ensuring that an action and its consequences are unquestionably good. Chidi's life of indecision looks practically spontaneous in comparison.

The big question now, of course, is how and if the points system can be fixed - a question that will be discussed, like all important questions, at IHOP. With one of the biggest mysteries of The Good Place now solved, it will be interesting to see where the always-unpredictable show takes us next.