« Aquaman Dethroned by The Upside at US Box Office
Shameless: 20 Things Wrong With Lip We All Choose To Ignore » 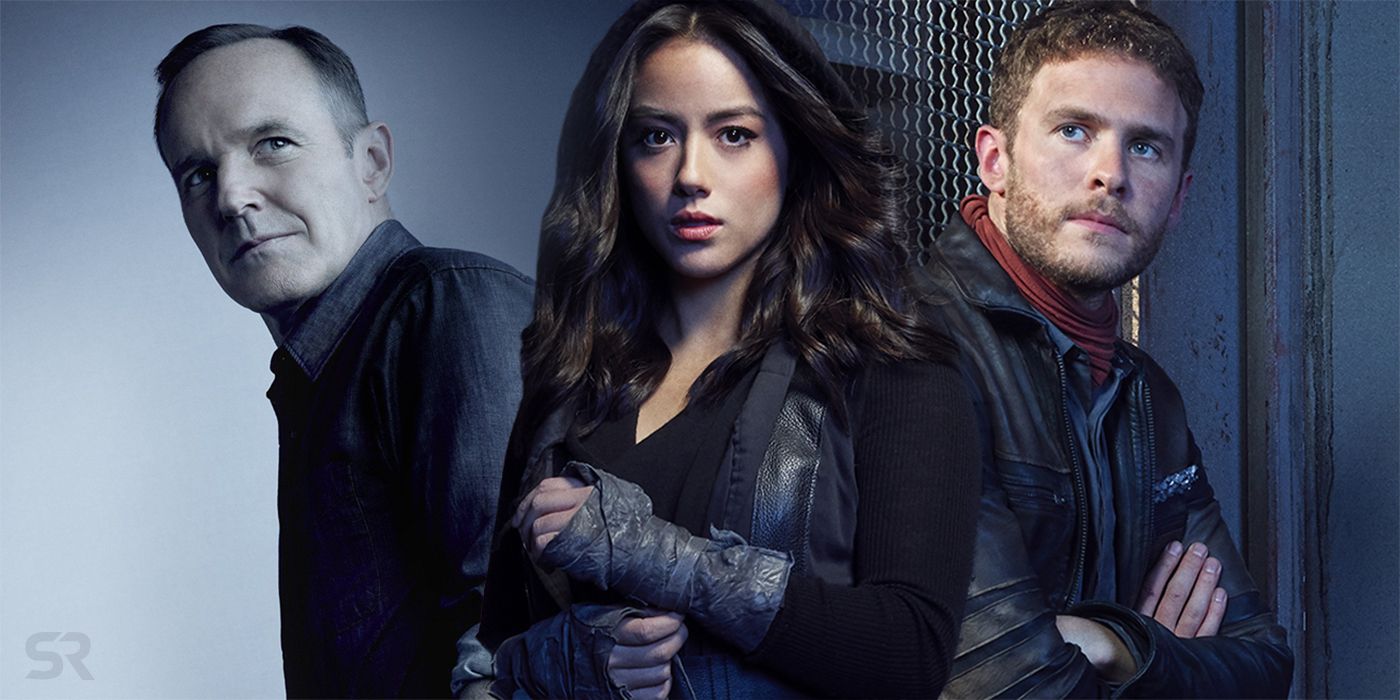 What could happen in Agents of S.H.I.E.L.D. seasons 6 and 7? When the scripts were written for Agents of S.H.I.E.L.D. season 5, the show's fate seemed to be up in the air. As such, the season finale was carefully designed to wrap up as many plot threads as possible, so it could potentially serve as an end to the entire show. In the end, though, ABC renewed the series for an abbreviated sixth season, which will air in the summer; they then surprised everybody by announcing a seventh season as well, which is reportedly due to start filming in February.

So far, precious little is known about Agents of S.H.I.E.L.D. seasons 6 or 7. Only two images have been released: one showing that Quake will get a new hairstyle, and the other confirming that Mack is still in place as Director (at least when season 6 begins). Chatter among the crew on social media has suggested that a trailer has been prepared, and that they're pleased with it, but it will presumably still be a while before that trailer airs.

For all season 5 did try to tie together as many loose ends as possible, there are still a lot of interesting ideas that Agents of S.H.I.E.L.D. could toy with going forwards. Since 2013, the show has established its own unique mythology; while it fits comfortably within the wider Marvel Cinematic Universe, it's telling a story all its own. That's proved a remarkable success, so it's safe to say that seasons 6 and 7 will continue to build on the foundations of what has gone before.

The Fate Of Phil Coulson

Agents of S.H.I.E.L.D. season 5 came to a close with Phil Coulson facing imminent death. Hosting the Spirit of Vengeance had undone the miraculous effect of Project T.A.H.I.T.I., meaning his body was gradually shutting down. Although the S.H.I.E.L.D. team did everything they could to save Coulson, in the end they were forced to accept his fate. Phil settled down on the real Tahiti to live out the last few days of his life, with Melinda May staying with him.

But will Coulson actually die? This is a superhero show, after all, which means that nobody should truly be considered dead - not even when you've seen the body. Clark Gregg has had meetings with executive producers Jed Whedon and Maurissa Tancharoen, but the outcome of those meetings is unknown. Certainly Gregg has been on set, but that's partly because he's taken on a role behind the camera as director, even taking charge of the season 6 premiere. Right now, it's impossible to say whether or not Phil Coulson will return.

The first episode of Agents of S.H.I.E.L.D. season 6 is called "Missing Pieces," and that seems entirely appropriate. Season 5 ended with the S.H.I.E.L.D. team heading into space to retrieve one of their members, Fitz, who was slumbering in cryogenic suspension somewhere in the depths of space. The season 6 announcement showed the S.H.I.E.L.D. logo against a backdrop of stars and swirling stellar gases, so it seems safe to say season 6 will remain in space - perhaps kicking off with S.H.I.E.L.D. retrieving Fitz. It's sure to be a strange experience for his beloved Simmons, as she spent months of her life with a version of Fitz from a timeline that's been averted - and even married him.

Related: Marvel's Agents of SHIELD's FitzSimmons is the Greatest Love Story in the MCU

Agents of S.H.I.E.L.D. season 5 introduced some major new elements into the show's mythology. One of the most fascinating was the idea of the Chronicoms, ancient androids who have monitored human civilization for millennia. Forbidden to intervene except in the case of an extinction level event, the Chronicoms revealed themselves in order to help S.H.I.E.L.D. save the entire planet. One of the two Chronicoms, Noah, was killed; the other, Enoch, is currently in space watching over the sleeping Fitz, so picking up Fitz will inevitably mean the S.H.I.E.L.D. team cross paths with Enoch. Interestingly, there's some evidence the Chronicoms could play an important part in Agents of S.H.I.E.L.D. season 6. According to IMDb, Denney Pierce will play "Chronicom Hunter #1" in episode 5. Assuming this is accurate, it means Enoch will wind up hunted down by unknown forces over the course of the season.

Quake could be more powerful than ever before in Agents of S.H.I.E.L.D. season 6. Quake was forced to inject herself with the Centipede Serum in order to defeat Graviton, and blasted him into space with her enhanced powers. It's unknown exactly what components were part of this version of the Centipede Serum. Extremis seems to have been in every version, so was probably part of the cocktail, but certainly S.H.I.E.L.D. had added Jiaying's healing properties into the mix in order to keep Coulson alive. So, the sample Daisy injected herself with likely contained both Extremis and Jiaying's powers. It also possibly contained a variant of the super-soldier serum, and perhaps even sources of Gamma radiation, both of which were common components in the Centipede Serum.

Chloe Bennet released a single image of her new Quake look in season 6, and it's interesting to note that she's back to wearing wrist gauntlets. There's always been a cost to Quake's abilities, and she's previously needed to be emotionally centered in order to use them without damaging her own body. It's possible that Quake's amplified powers mean she needs to wear the gauntlets permanently now. Meanwhile, it will be exciting to see whether or not the Centipede Serum triggers any new abilities in Daisy - whether she gains Extremis-based enhanced strength, for example, or her mother's regenerative powers. Some versions of the Centipede Serum have had detrimental affects upon their subjects, and it's even possible Quake's enhancement could backfire in some way.

Of course, what's unknown is whether or not this affect will be permanent. In an interview with Entertainment Weekly, Jed Whedon refused to give any indication. "Well, she’s definitely juiced up in some way," he noted, "and how much that carries, we’ll see."

Page 2 of 2: Some Of The Most Important Stories That Could Be Revisited

The Sixth Race Of The Confederacy

The villains of Agents of S.H.I.E.L.D. season 5 were an alien Confederacy, a thousand-year-old alliance between different groups who plunder resources from other worlds and trade with one another. They included the Kree outcast faction House Kasius, the shadow-warrior race called the Remorath, the brutal Rajaks, a possibly-nomadic race called the Kallusians, and the metal-manipulating Astrans. It's possible the Confederacy aren't done with Earth; certainly the Rajaks may want revenge given Graviton killed their leader.

But here's the catch: Agents of S.H.I.E.L.D. revealed that there's a sixth member of the Confederacy, but didn't identify who those aliens are. That's led many to speculate that the sixth race in the Confederacy is intended to be the Skrulls, but that the show didn't have permission to use them until after Captain Marvel. If that's the case, the S.H.I.E.L.D. crew could be facing a terrifying and dangerous new threat.

Related: How MCU Skrulls Have Changed From The Comics & Concept Art

What Will Happen To Deke?

Jeff Ward has been promoted to a series regular for Agents of S.H.I.E.L.D. season 6, which means the time-traveling Deke is sure to be important in some way. Deke originates from a now-averted future timeline in which the Earth was shattered like an egg, and he was last seen heading off to enjoy the Earth. How will he team up with S.H.I.E.L.D. again, and will Deke's unrequited love for Quake ultimately mean he gets a shot at romance?

The Mystery Of Vijay Nadeer

Season 4 introduced viewers to Vijay Nadeer, the brother of an anti-Inhuman senator who unfortunately possessed an Inhuman gene. Exposed to Terrigen, he underwent an unusually gradual form of Terrigenesis, and emerged from a cocoon with some sort of combat instincts and enhanced reflexes. Vijay was shot by his sister, and his body was dumped into the ocean; curiously, trace elements of Terrigen in the water triggered secondary Terrigenesis, and a new cocoon formed around Vijay's body. The idea of secondary Terrigenesis was revisited by Marvel's Inhumans series, which revealed that it damages the Inhuman's mind. Vijay hasn't been seen since Agents of S.H.I.E.L.D. season 4, so he's surely overdue to return.

Could The Ghost Rider Return?

Of course, there's one character from Agents of S.H.I.E.L.D. season 4 who every fan wants to see return; Gabriel Luna's Ghost Rider. Luna played Robbie Reyes, a car mechanic from Los Angeles who became host to the Spirit of Vengeance, and he proved to be an absolute hit. The special effects were stunning, although they proved too expensive to keep the character for the full 22 episodes. Season 4 ended with Ghost Rider taking possession of the Darkhold, using his chain to open a portal, and stepping through it. He's not been seen since - but there's a huge appetite for the Ghost Rider's return.

How Is Agent Davis Still Alive?

Played by Max Osinski, Agent Davis has been a recurring secondary member of the S.H.I.E.L.D. team - introduced all the way back in season 1. His fate appeared to be sealed during season 4, when he turned his back on Aida, failing to realize she was still alive. Davis curiously survived an encounter with the psychopathic ex-android, though, apparently walking away with only a scar. Agents of S.H.I.E.L.D. has never explained what happened, but Davis quite enjoys telling the story - and it's a rather spectacular one, prompting an astonished reaction from Deke.

But is it true? After all, Davis apparently survived an encounter with a powerful being known for creating android doppelgangers of S.H.I.E.L.D. agents. What's more, the show exists in a cinematic universe where there are at least two races of shapeshifters, the Skrulls and the Xartans (introduced in Runaways). Many fans believe that all is not as it seems, and that Davis was really killed by Aida - and replaced. Interestingly enough, Davis is the only cast member confirmed to be appearing throughout season 6 on IMDb. So this mystery may well be resolved.