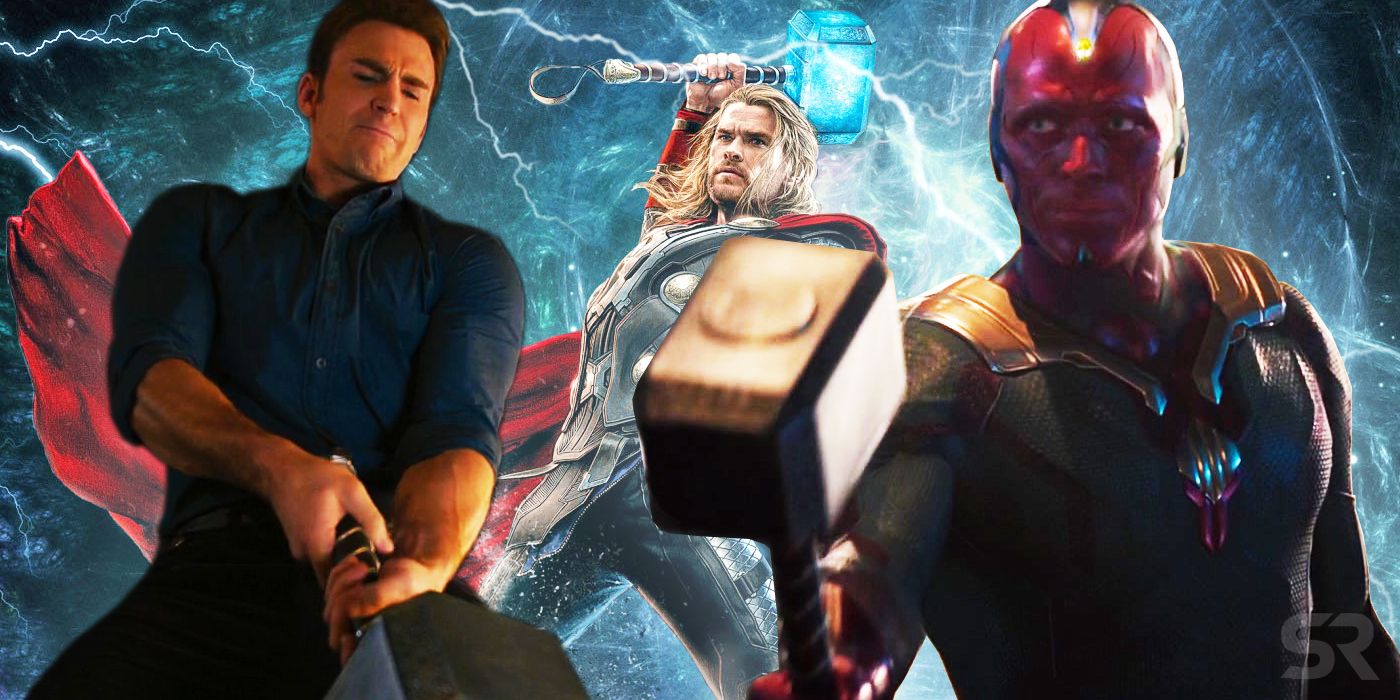 Which characters in the Marvel Cinematic Universe have lifted Thor's hammer? Before it was destroyed in Thor: Ragnarok, the God of Thunder's enchanted hammer Mjolnir was arguably the most celebrated weapon in the MCU. "Whosoever holds this hammer, if he be worthy, shall possess the power of Thor" is the enchantment Odin placed on Mjolnir, so it's easy to think only Thor was able to wield it but a few others in the MCU have also been deemed worthy by the mighty hammer.

The MCU began with 2008's Iron Man and at first, displays of superpowers were based in science (Steve Rogers and Bruce Banner gained their powers from scientific experiments). 2011's Thor introduced magic into the MCU, though the film was quick to point out that the Asgardians' abilities were actually more like advanced super-science indistinguishable from magic (until Doctor Strange introduced actual sorcery in 2015). Mjolnir's origin is also properly mythic: at Odin's request, Mjolnir was forged of the special metal Uru in the heart of a dying star by the Dwarves of Nidavellir.

Whether it was powered by super-science or by magic, the iconic Mjolnir had no equal and it was certainly one of the greatest weapons in the MCU. It was also fun at parties; in Avengers: Age of Ultron, Earth's Mightiest Heroes' bantering about the rules of who was "worthy" to lift it and then playing a game of actually trying to heft Mjolnir endeared his human friends to Thor. "You're all not worthy," the God of Thunder mocked his friends and it's notable who completely failed to lift the hammer, including Tony Stark, James Rhodes, Clint Barton, and Pietro Romanoff. Even the Hulk couldn't budge Mjolnir at all when he fought Thor in The Avengers. When Thor left the hammer on Loki's chest, the God of Mischief was also completely pinned to the ground, proving he's not at all worthy to lift Mjolnir.

When Hela destroyed Mjolnir in Ragnarok, the loss of his hammer hurt Thor as if he'd lost an old friend. As Korg succinctly phrased it, "Sounds like you had a pretty special, intimate relationship with this hammer and that losing it was almost comparable to losing a loved one." While Thor and his mighty hammer did indeed share a special bond, here are the others in the MCU who Mjolnir also deemed worthy to lift it:

Of course, Thor is worthy to wield Mjolnir - except for the time he wasn't. In Thor, the Odinson's hubris angered the Allfather and caused Odin to banish his son to Midgard (Earth). Both Thor and Mjolnir crash-landed in New Mexico where the hammer came under the possession of S.H.I.E.L.D. Meanwhile, Thor met Jane Foster and her friends, fell in love with her, and had to learn humility in order to regain his godly powers in time to stop the Destroyer - and this included becoming worthy once more to wield Mjolnir. Since then, Thor and Mjolnir were inseparable until Hela destroyed the hammer in Thor: Ragnarok.

Mjolnir allowed Thor to channel his innate powers as the God of Thunder. With it, Thor could harness lightning, control the weather, fly through space, and when thrown, the hammer would always return to Thor's hand. For a long time, Thor mistakenly believed most of his powers came from Mjolnir and it was only after the hammer was gone that Thor came to understand his power came from within and Mjolnir was merely a means to focus it. Thor has since replaced Mjolnir with the Stormbreaker ax (his Thanos-killing weapon) but it remains to be seen if there might be a way for Thor to be reunited with a restored Mjolnir once more.

Related: Thor Should Replace Star-Lord In Guardians of the Galaxy

As the Allfather and ruler of Asgard, Odin Borson is naturally worthy to wield Mjolnir. It was Odin who commissioned the Dwarves of Nidavellir to forge the hammer in the first place. "As a weapon to destroy or as a tool to build. It is a fitting companion for a king," Odin decreed of Mjolnir. Odin also exhibited the ability to command Mjolnir and he basically ordered it to deem Thor unworthy when he stripped his son of his power and exiled them both to Midgard. The hammer was Odin's gift to Thor and the one-eyed old king was also the cause of the enchantment placed upon Mjolnir about worthiness so that Thor would have to earn the right to wield Mjolnir. Perhaps the Allfather added the "worthiness clause" because Mjolnir originally didn't belong to Thor but to his firstborn daughter Hela...

Hela was Odin's firstborn, the Asgardian Goddess of Death, and the original wielder of Mjolnir. Millennia ago, before Odin imprisoned Hela in Hel, Allfather and daughter conquered the Nine Realms together. In their bloodthirsty campaigns, they plundered the Nine Realms and the gold they took was used to build the royal palace of Asgard. However, Odin grew weary of war and wanted to rule as a benevolent king but Hela didn't want to stop at a mere Nine Realms and wished to conquer the rest of the cosmos. Odin not only imprisoned Hela, but he also made sure her existence was written out of Asgard's history - until she returned in Thor: Ragnarok. After Odin's death, one of the first things Hela did when she met Thor and Loki for the first time was easily destroy Mjolnir, her old weapon.

Page 2 of 2: Avengers And Others Who Have Lifted Thor's Hammer

Vision was probably the most surprising being who proved easily capable of lifting and wielding Thor's hammer. An android originally built by Ultron as a "perfect vision" of his evolved form, Vision was made from Vibranium stolen from Wakanda in the Cradle designed by Dr. Helen Cho, given thought by the artificial intelligence of J.A.R.V.I.S. with a mixture of memory engrams from Tony Stark, Bruce Banner, and Ultron, and he was powered by the Mind Stone.

Thor used Mjolnir's lightning to bring Vision to life in Age of Ultron and in the debate that followed about whether Vision was a new enemy to the Avengers or not, the android picked up Mjolnir and handed it back to Thor, which deemed him worthy of Thor and the other heroes' trust. In the Battle of Sokovia, Vision not only used Mjolnir against the Ultron drones, but he also remarked that the hammer was "terribly well-balanced", to which Thor replied, "Well, if there's too much weight, you lose power on the swing."

You would think that of any human alive, Steve Rogers would be the one Thor's hammer would deem worthy to lift it and Mjolnir agreed ever so slightly. Of course, for years, Captain America carried his own iconic weapon, his Vibranium shield that often worked in tandem with Thor's hammer to create combination vibration attacks. However, at the Avengers' party in Age of Ultron, it was time for Steve Rogers to test his worthiness and the Super Soldier tried his very best to lift Mjolnir. The fact that the hammer actually budged just a tiny bit visibly disturbed Thor, but he was soon relieved that his own worthiness as the only Avenger who could lift Mjolnir was reaffirmed - until Vision came along.

At the end of Age of Ultron, Thor, Steve Rogers, and Tony Stark joked around about lifting Thor's hammer and argued whether an elevator could lift it. Thor didn't mention that months before, an ordinary household item was somehow worthy enough to lift Mjolnir: in Thor: The Dark World, Thor politely hung his hammer on a coat hook when he entered Jane Foster's London flat. This was one of the lowkey funniest moments in Thor 2, not just because Thor thoughtfully displayed human etiquette during his first time visiting his girlfriend's apartment but also because the coat hook didn't immediately break and send Mjolnir crashing into the floor. Therefore, a coat hook proved worthy of lifting Mjolnir!

Would Groot have been worthy to lift Mjolnir? Thor's hammer was long destroyed by the time the God of Thunder hooked up with the Guardians of the Galaxy and led Rocket and Groot to Nidavellir to forge Stormbreaker in Avengers: Infinity War. The handle of the Thanos-killing magic ax is actually made from the wood of Groot's own arm and the teenage tree had no problem lifting Stormbreaker. However, Stormbreaker has no enchantment placed upon it about worthiness so likely anyone could wield it. Mjolnir didn't think Steve Rogers was worthy but maybe it would have chosen the pure-hearted Groot (despite his rebellious potty mouth).