Detective Pikachu: Every Pokémon Confirmed For Live-Action (So Far) [UPDATED] 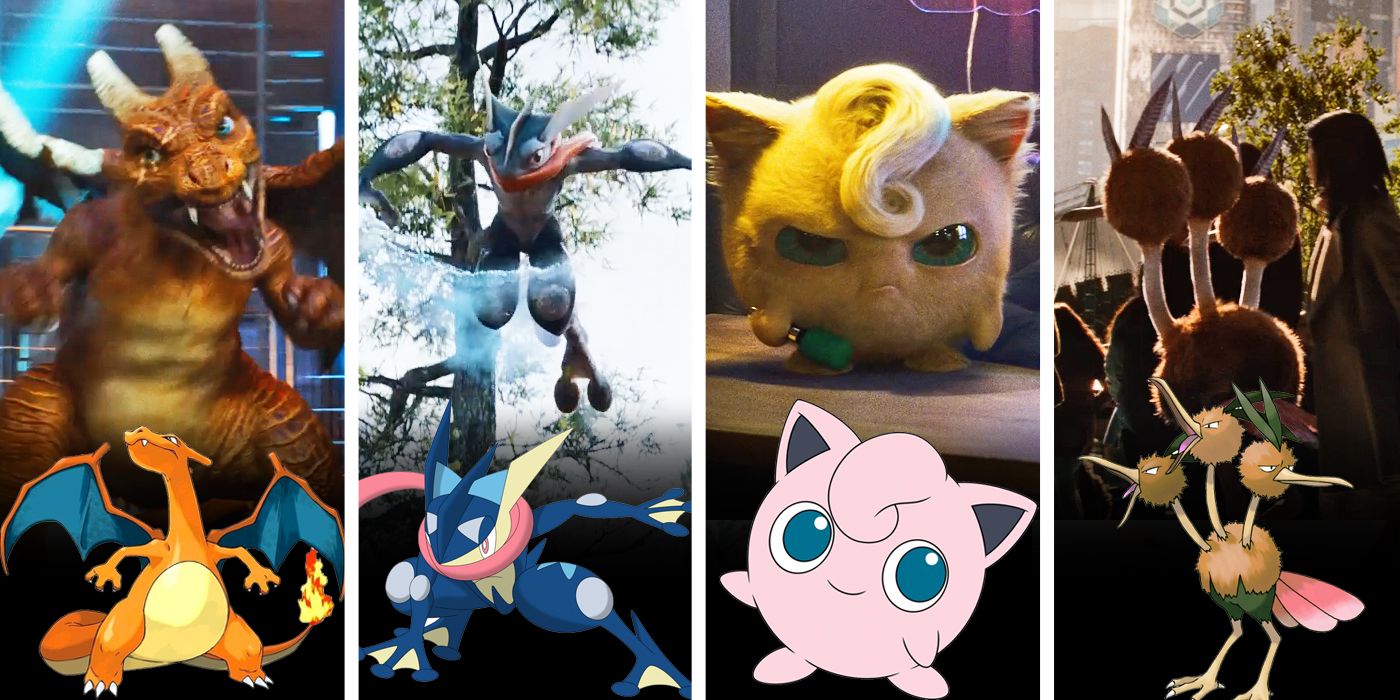 What Pokémon are featured in the trailer for Detective Pikachu? The first footage has been released for the Pokémon movie, giving fans their first taste of what the gaming icons look like in live-action. Not only do they look awesome, but there's no shortage of classic monsters, and some new ones, for fans to see.

Following a talking Pikachu voiced by Ryan Reynolds that only Justice Smith's Tim Goodman can understand, Detective Pikachu promises to be a journey through the magical land of these creatures like we've never seen before. It's a very different take on the world than fans of the training game are used to, but the teaser suggests that the story's still worthy of the big screen.

Indeed, there's a lot more to Detective Pikachu's trailer than the titular electric mouse. The footage is packed with Pokémon, from familiar starters front-and-center to obscure oddities hidden in the background. Here's every one that we found.

The first monster we see properly in the Detective Pikachu trailer is Charmander, one of the three starter Pokémon Professor Oak offers the player in Pokémon Red and Blue, alongside Bulbasaur and Squirtle. The fire-and-lizard type was also a mainstay of Ash's team in the anime, making him an easy choice as the first ones viewers of the trailer get a good look at.

A cultural icon and the face of the series, Pikachu needs no introduction. Voiced by Ryan Reynolds in Detective Pikachu, this electric-mouse has a special bond with Tim, the protagonist of the movie, a bond that looks to mirror the one Ash has with his trusty yellow sidekick in the anime.

Older fans of the series will remember Misty's Psyduck as a warbling creature suffering from an eternal headache. The Psyduck seen in Detective Pikachu is calm and collected, probably well-trained by its owner. A powerful psychic Pokémon, it'll be interesting to see how the movie handles monsters with Psyduck's abilities.

Another of the classic starting roster, Bulbasaur was a part of Ash's squad as well as one the grass option in Pokémon Red and Blue. Drawing its energy from the sun, the troupe seen marching down a stream in the Detective Pikachu trailer is typical of the peaceful natural habitat these creatures stay in. Also note the Morelull, the Fairy type from Generation VII, floating nearby.

It's only right that Jigglypuff, the sweet-singing diva pokémon, is seen getting annoyed with a passed out body beside her. The pink ball may look cute, but her song can put just about anything to sleep, and she doesn't take well to people sleeping during her performances.

One of the main reasons Charmander was such a popular choice among first-generation Pokémon players was that it evolved into this fire-breathing dragon. Charizard is a tough creature to keep in line, but for anyone who manages it, they have a serious weapon at their disposal for battles. In Detective Pikachu, it looks like the hero will end up facing one of the creatures in a cage match.

This is a sixth generation Pokémon, introduced for Pokémon X and Y in 2013. Likely new to many viewers, it's a water-and-dark type whose body and move-set resemble that of a ninja. Greninja appears to be on the offense in the two appearances in the Detective Pikachu trailer, so it's likely they're the monster of choice for whomever Tim and Pikachu are up against.

Completing the roster of first generation starters in the Detective Pikachu trailer is Squirtle. Though only barely seen here, the small turtle will surely have his moment to really maximize nostalgia.

Used to demonstrate the presence of Reynolds' acerbic wit, Mr. Mime's Detective Pikachu scene will be different how many recognize the human-like creature – as a strange but reliable assistant to Ash's mom in the series. Mr. Mime's moves are, as seen, that it can create objects through the power of mime.

A new Detective Pikachu TV spot revealed a live-action Snubbull, the pink bulldog Pokémon introduced in Generation II. He looks decidedly bigger than the other animal-like Pokémon, coming up above a desk. He appears to be partnered with Ken Watanabe's character, suggesting Snubbull's are employed by the police department.

Page 2 of 2: Other Pokémon Teased In The Background of Detective Pikachu's Trailer

The opening shot of the Detective Pikachu trailer aims to give a taste of this new world, and does so by highlighting several familiar Pokémon. Just behind Charmander is a Dodrio, a long-necked three-headed ostrich-like monster, walking with some people. Several other birds are flying overhead, including Pidgeotto, Comfey and Braviary.

In the background of the same city shot, signs bearing the faces of some Pokémon can be seen. In the top right is Victini, a psychic-and-fire type from the fifth generation. To the left, then, is Wooper, a water-and-ground type from the second generation.

Behind Psyduck in his first shot are giant balloons of the pink-sining Jigglypuff and ghost-evolution Gengar. They are in the classic animated style of the characters, suggesting that Detective Pikachu will work those designs into the world somehow.

Tim's room is covered in posters for various big Pokémon championships and tournaments. Two we can clearly see are advertising a battle between Dragonite, an awesome dragon-type, and Hypno, one of the most powerful psychic types, and a fight between legendary ice-bird Articuno and Steelix, the metal-evolution of rock-snake Onyx. Others feature art from the games of various legendary monsters, such as the red poster visible behind Tim's head of fifth generation legendaries Zekrom and Reshiram about to engage in battle.

Some monsters can be discerned in the crowded marketplace scene later on in Detective Pikachu's trailer. Top-left there's a group of Emolga, a small electric-and-flying mouse-like Pokémon, then in the background of the middle is a Dodrio, the three-headed evolution of Doduo.

Missing Posters For Squirtle And Pancham

Finally, there's some sense of the mystery Detective Pikachu will be dealing with. A shot of the police station shows missing person signs for fighting-type Pancham and Squirtle. It's likely that Pokémon are disappearing, leading Tim and his friends to find the source. The posters also reveal two other key pieces of information about the world of Detective Pikachu: the pocket monsters appear to have owners, and are surnamed "Pokémon".

Next: Detective Pikachu Movie Trailer, Cast, Every Update You Need To Know