Everything We Know About Captain America’s Role In Avengers: Endgame 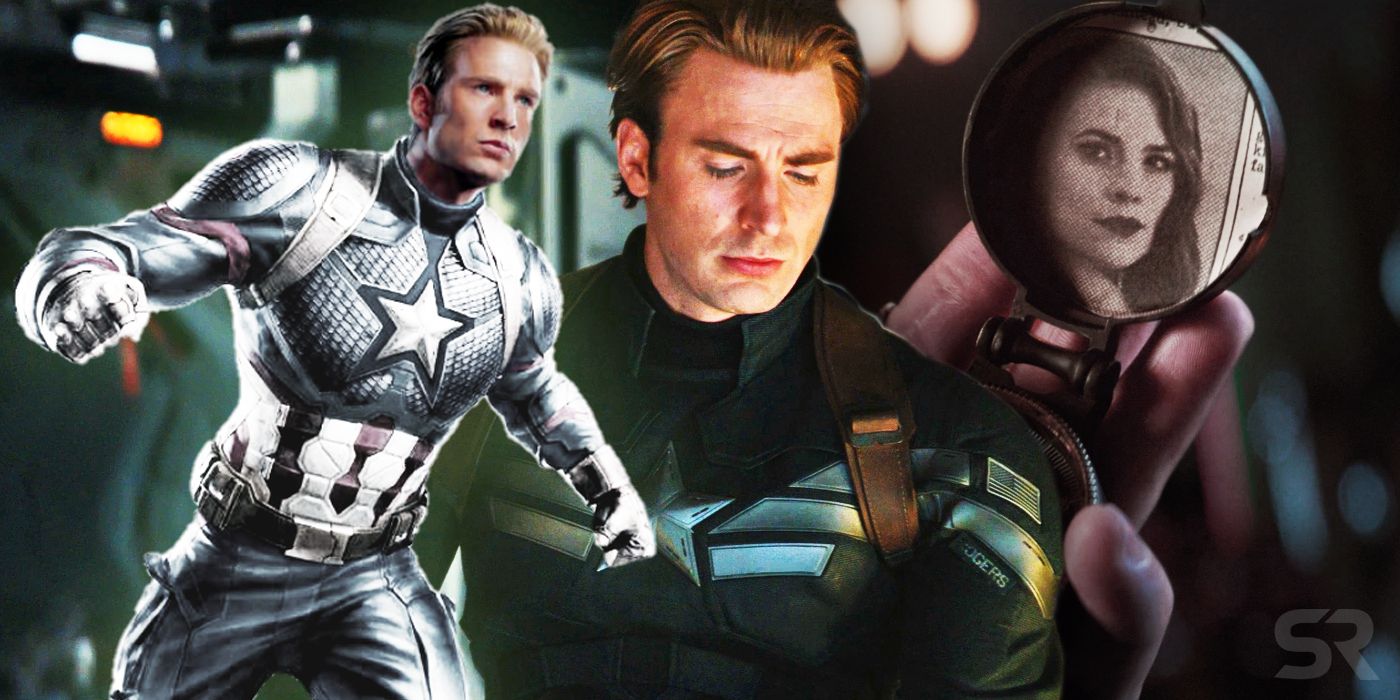 Here's everything we know about Captain America's role in Avengers: Endgame. Chris Evans began playing Steve Rogers, the Marvel Cinematic Universe's first superhero, back in 2011 with Captain America: The First Avenger. The super soldier has been put on quite a journey since and is set up to have a very intriguing role in Avengers 4 later this year.

Avengers: Endgame is Marvel Studios' direct followup to Avengers: Infinity War, even though they're releasing two other movies (Ant-Man and the Wasp and Captain Marvel) in between. After previously being on the defensive to try and protect the Infinity Stones from Thanos' grasp, Captain America and the Avengers will now be on the offensive and trying to reverse the casualties that came as a result of the Mad Titan's snap. They're still somewhat of a fractured team when the movie begins with Iron Man left drifting in space before his rescue, Hawkeye likely mourning the loss of his family, and Hulk still refusing to come out.

This has all set up Avengers: Endgame to have the potential to have fascinating character arcs for several heroes - not least leader Steve Rogers. The ones expected to receive the most concentration are the original six Avengers, who very well could say goodbye to the MCU when the dust settles (or rather when the dust reforms to bring back those they've lost). One of those original Avengers primed for an epic conclusion to his story is none other than Captain America, and here's everything we know about his role.

Captain America Is Leading The Avengers In Endgame

When audiences last saw Captain America in Avengers: Infinity War, he was still a fugitive from the government as a result of not signing the Sokovia Accords in Captain America: Civil War. He spent the following two years on the run with Black Widow (Scarlett Johansson), Falcon (Anthony Mackie), and Scarlet Witch (Elizabeth Olsen) and literally emerged from the shadows in Infinity War. Although his role in the epic team-up was not as large as many fans were hoping, this was all by design. Writers Christopher Markus and Stephen McFeely have indicated that Captain America will have a much larger role in Avengers: Endgame.

For the purposes of the upcoming film, it appears that Captain America will be the man in charge of the Avengers. Steve had recently taken up his Nomad look, but as the Avengers: Endgame trailer confirmed, he's clean shaven and back at the forefront of the team, as they lounge around Avengers HQ. The team is in shambles after Thanos' snap wiped out half of the population of the entire universe and it will be up to Steve to put them back together. Captain America has taken on the leadership role with the Avengers before, slowly becoming the face of the team instead of Iron Man, and since Tony is close to dying in space, it is once again Steve's job to rally the troops and figure out a game plan. He's clearly desperate for their plan to work too, as he says in the trailer, "I don't know what I'm gonna do if it doesn't."

Captain America may be back in his proper role with the Avengers, but his look will continue to change and evolve in Avengers: Endgame as he'll wear a few new suits. Steve has only had his updated suit from Captain America: Civil War to wear the last several years, and his secret Avenging took a toll on him and the suit. It was worn and torn during these adventures, so Steve's in desperate need of a new look. The trailer confirmed one of the suits he'll be wearing is his stealth S.H.I.E.L.D. suit, previously seen in Captain America: The Winter Soldier. While this is believed to be part of the team's time-traveling plan, this is an old suit that Steve will pull out of his closet. But, we'll also get to see at least two new suits.

Related: All The Time Travel Hints In Avengers: Endgame's Trailer

One of the new suits that Captain America will be wearing in Avengers: Endgame is pulled straight from the comics; the MCU is finally going to give him his chainmail look. This enhanced design has been a staple of Cap's comic look for years and early concept art for the fourth Avengers film revealed he'll actually wear it on the big screen. This part of Captain America's suit appears to have been built in under his previous suits, but now the chainmail will be front and center.

His second new suit is actually part of a completely new look for the Avengers, as it appears most of them will be wearing white variations of their costumes in Avengers: Endgame. It is believed that these white suits may be nanotech suits that go on over each hero's original costume, with the purpose of them speculated to be so they can enter the Quantum Realm and travel across time. We've yet to see the white suits beyond toy packaging, but VFX dots on Steve's The Avengers suit from a possible time travel scene further indicates this possibility becoming the reality.

A large part of Captain America's journey has been tied to Peggy Carter (Hayley Atwell). She worked closely with Steve to get him ready for his super soldier operation and then continued to stay close by throughout World War II. The two formed a loving relationship over time, but one that was never properly fulfilled; when Steve crashed Red Skull's plane and became lost to the ice for 70 years, Peggy's life continued, as shown on Agent Carter. They didn't get their dance, but Steve did find an aged Peggy in the present day after he awakened. He was there for his best girl all the way up until her death, which was chronicled in Captain America: Civil War.

Despite Atwell's first MCU appearance taking place in the 1940s, she's repeatedly popped up in subsequent films - like Ant-Man or Avengers: Age of Ultron. However, she hasn't been back on the screen since her multiple appearances in 2015. The trailer for Avengers: Endgame gave us a look at her, kind of, through the picture of Peggy placed in Cap's compass. There have been plenty of rumors that Atwell filmed scenes for Avengers: Endgame and will make a return in some form. This could be the result of the time travel plot, with plenty of theories believe the film could end with Steve going back to his original time and getting a happy ending with Peggy.

Avengers: Endgame is set to be Chris Evans' final MCU appearance, meaning it is widely believed that Captain America's story will come to an end in some fashion this year. Evans was originally hesitant to take on this role due to the length of his contract and his interest in playing him more has wavered over time. His original deal with Marvel Studios was for six appearances, but Evans has extended and changed his deal to allow for fun cameos and so the end of Phase 3 could be told over the course of two Avengers films instead of just one. Avengers: Endgame will be his ninth MCU appearance (not counting the Ant-Man post-credits scene) and Evans' now famous wrap tweet indicates it could be the end.

When he finished filming all of his scenes for Avengers: Endgame, Evans effectively tweeted out his goodbye to the MCU and the character of Captain America. He's attempted to slightly take back this statement by saying it in no way indicates Cap will die in Avengers 4. Additionally, director Joe Russo has teased that fans do not completely understand the context of the tweet, saying Evans isn't done yet and refused to elaborate, "I don’t want to explain what I mean, but audiences will soon understand." This may just be Marvel trying to keep the ending as protected as possible though, as it looks increasingly likely that the MCU will need a new Captain America after Avengers: Endgame.

Who Will Replace Captain America After Avengers: Endgame?

Whether Captain America's story ends in death, in the past, or simply in retirement, a new Captain America will be possible if this is the end. There are already two prime candidates to pick up the red, white, and blue shield too. The first is his longtime best friend James "Bucky" Barnes aka The Winter Soldier or White Wolf (Sebastian Stan). The second is his more recent trusty sidekick Sam Wilson aka Falcon.

Both men may be equally qualified to take on the mantle should it become available, and who becomes the choice may very well be the plot of their upcoming Disney Plus series. Stan reportedly signed a nine-picture deal with Marvel Studios originally, so he is the most logical choice based on him having several movie options still available. However, Mackie's Falcon could follow in the footsteps of his comic counterpart by taking on a lead role as the new Captain America. There's also the possibility that Marvel Studios could go in a completely different direction with the mantle and an entirely new character will pick up the shield after Steve Rogers.

However Avengers: Endgame shakes out, it is clearly positioned to be an important couple of hours for Captain America. He'll likely get a rematch against Thanos, but could say goodbye in the process.

MORE: Avengers 4: Every Update You Need To Know