« St. Bernard Syndicate – Trailer
Why Aquaman Will Be First DCEU Film To Pass $1 Billion (And Not Batman) » 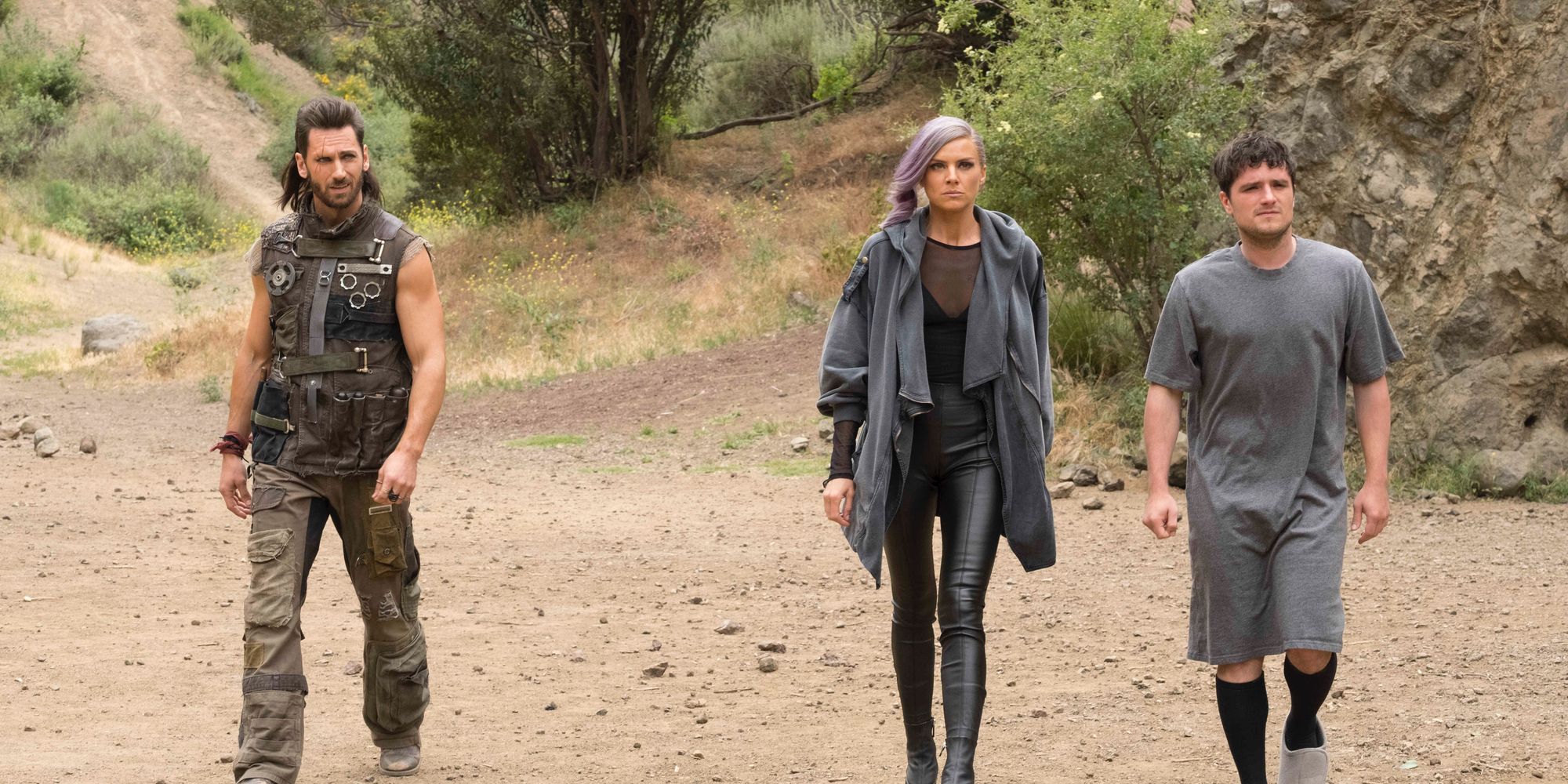 Following a first season rife with pop-culture references, particularly those about the films on which it was — at least partially — spoofing (e.g., Back to the Future, Terminator, etc.) Future Man season 2 is less concerned with getting that point across than it is in blazing a new trail for its wayward (and somewhat inept) time traveling trio of Josh Futterman (Josh Hutcherson), Tiger (Eliza Coupe), and Wolf (Derek Wilson). Now that doesn’t stop the show from infusing its second season with a heapin’ helping of Mad Max allusions, but overall, the gross-out comedy from the guys who brought you Sausage Party, as well as executive producers Seth Rogen and Even Goldberg, uses its second season as a springboard for more a original (and humorously convoluted) story.

Whereas season 1 of Future Man was concerned with various familiar mechanics of time travel, sending Josh, Tiger, and Wolf to various past timelines in an effort to prevent Keith David’s Dr. Kronish from developing a cure for herpes that would bring about an apocalypse, season 2 operates in a more linear fashion — at least to begin with… sort of. The season opener, is perhaps one of the more convoluted openings of any new season in recent memory, putting Josh in a strange kind of virtual reality run by some not-so-great folks in the alternate (and also not-so-great) future that is the direct result of his actions in season 1. The first few minutes work too hard to juggle an unnecessary info dump recounting how Josh wound up where he is, while also trying to establish the new setting: a dystopian landscape split between what’s left of humanity and the biotics — or Bio-Techs — who were the enemy just a season ago.

More: Brooklyn Nine-Nine Review: The Network Has Changed But The Comedy Hasn’t

The info dump pays off somewhat in later episodes, though, as it affords Future Man the chance to spread its narrative out among the three main players, giving Josh, Tiger, and Wolf (or Torque) distinct narratives early on before regrouping near the season’s midpoint. The result is a more ambitious season that swings for the fences with some truly ridiculous scenarios, the vast majority of which take full advantage of the show’s not-so-secret weapon: Derek Wilson. Wilson was the MVP of season 1, making Wolf’s hyper-aggressive, overly masculinized persona a source of the show’s biggest laughs. It would seem the writers’ room took notice, too, as Wilson has been given a significant chunk of screen time this season, and, unsurprisingly, he capitalizes on the opportunity.

The choice to afford each character their own arc, separate from the others works best for Tiger and Wolf, as their choices seem to carry more weight in terms of developing their characters. Coupe’s Tiger is made more interesting thanks to the revelation she’s not the human she thought she was, which compromises her position with Josh and Wolf. Giving a character a secret they need to keep from everyone else on the show is usually a surefire way to render the story inert, as it rarely delivers the kind of dramatic stakes that can sustain several episodes worth of tension. Here, though, Future Man makes a smart choice by separating Tiger from Wolf (the one person she doesn’t want to know the truth) early on, sending her on a quest to discover who she is and perhaps reconcile with it in some way before being inevitably reunited with her teammates. This puts Coupe’s sardonic comedic sensibilities to good use, giving her a chance to shine away from Wilson’s more eccentric and sometimes grandiose performance.

Wilson, meanwhile makes hay with an episode dedicated to a confused Wolf acclimating to life in the new future, one that sees him placed in a spousal group made up of men and women, some of whom are rather suspicious of him on his return. That their suspicions are confirmed while spying on Wolf as he’s using the toilet is Future Man being Future Man. Credit where credit is due, the series never misses a beat when presented with an opportunity to make a sexual, scatalogical, or otherwise puerile joke, and Wilson is not only game, he’s able to sell the series’ brand of juvenile humor with the necessary levels of conviction and smirking self-awareness. He’s equally funny delivering an impassioned Merchant of Venice-like speech with his pants around his ankles as he is participating in a ridiculous wheel-crafting routine that plays like the training montage from Wet Hot American Summer.

But as much fun as Future Man has sending its characters on their own private journeys, it’s not long before Josh, Tiger, and Wolf are back together, dealing with doppelgängers and Hailey Joel Osment as a holographic Dr. Stu Camillo. But even when the gang is reunited, Future Man upends expectations by not making things business as usual. Instead of a rehash of season 1, the show make a concerted effort to try something new. It all adds up to a more ambitious season that still aims to deliver the juvenile comic sensibilities that made season 1 work.

Future Man season 2 is available to stream on Hulu.