« 15 Character Exits That Hurt Shondaland Shows (And 10 That Need To Go)
The Vampire Diaries: 20 Fan Theories That Completely Change The Show » 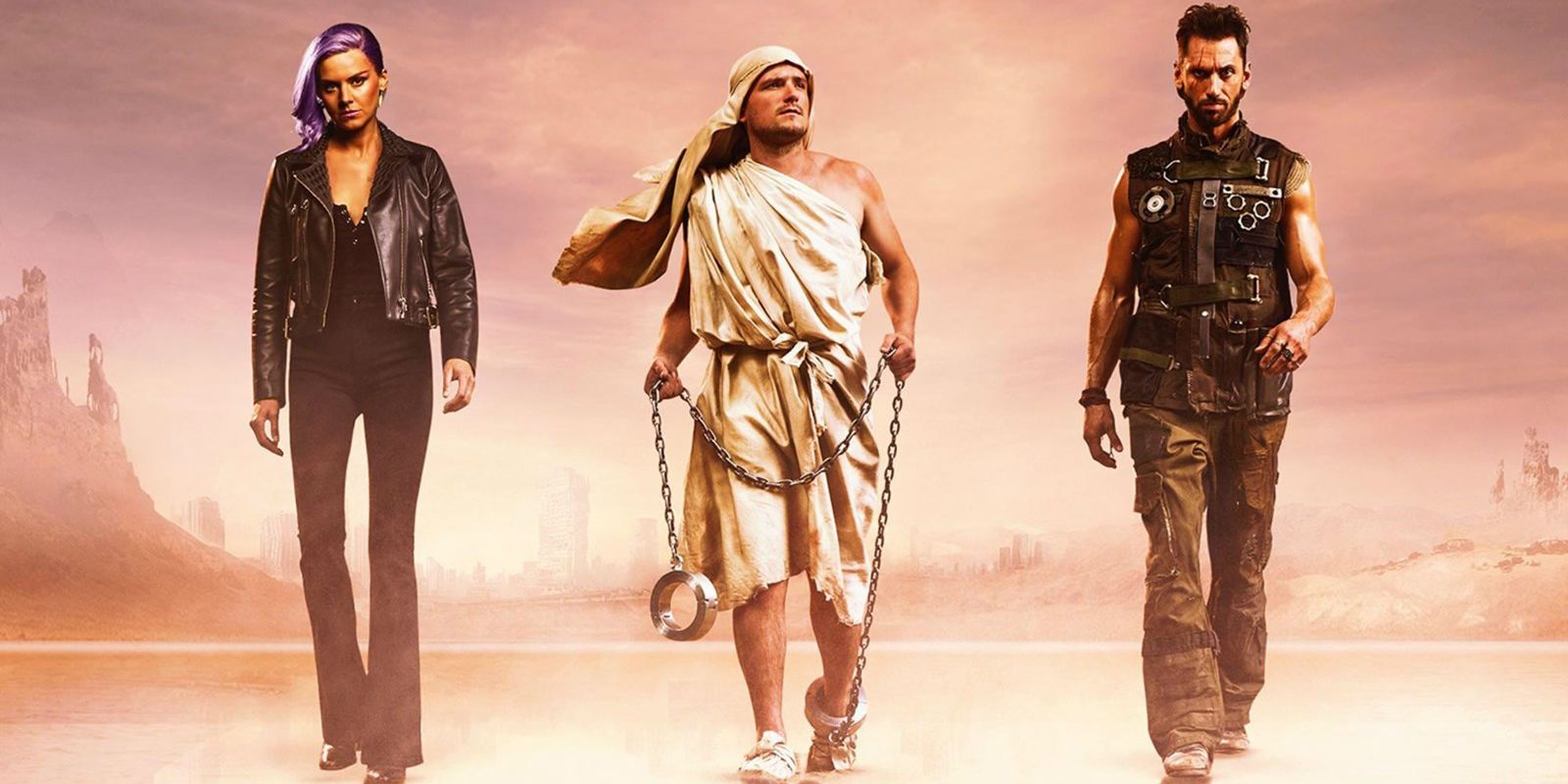 Future Man launches into its second season on Hulu today, and Seth Rogen and Evan Goldberg's nostalgia-laden, time-traveling series promises to get even zanier in its sophomore outing than it did in its first (if you watched five full minutes of season 1, you’d know that’s saying something). At the end of the last season, time travelers Tiger and Wolf (Eliza Coupe and Derek Wilson) and their unwitting recruit Josh Futturman (Josh Hutcherson) finally succeeded in their mission to deter a timeline that resulted in a post-apocalyptic Earth filled with humans hunted by the villainous Biotics.

Unfortunately (as is often the case with time travel, when will we learn?), the future didn’t turn out as idyllically as they’d planned. Season 2 will feature less time-jumping as the characters attempt to navigate a future in which the Earth is nearly uninhabitable and Stu Camillo (Hayley Joel Osment) has risen to Elon Musk status. Also, Seth Rogen shows up as a man named Sue. Read on for a guide to the cast and characters returning for Season 2 and what we can expect from their new futures.

Josh Hutcherson as Josh Futterman: Season 1 served as a low-key coming-of-age story for directionless gamer Josh Futturman. Dissatisfied with his career and status, he somewhat willingly jumps at the chance to accompany resistance fighters Tiger and Wolf as they travel back in time in an effort to kill Elias Kronish, the beneficent scientist whose herpes research accidentally results in the creation of a race of Biotics bent on eliminating all humans. After his numerous attempts to save the future result in demented versions of his own life, Josh realizes how much he took for granted and eventually sets things right at the expense of his own freedom. Unfortunately, the future he thought he created doesn’t exist, and he starts season 2 out of prison, but 150 years in the future in another, different dystopia than the one he set out to avoid.

Eliza Coupe as Tiger: Ruthless, yet naïve, Tiger spent much of season 1 attempting to murder Elias Kronish only to be stopped by Josh, who insisted they could change the future without killing the innocent scientist. Her adventures through time eventually led her to spend years as Kronish’s nanny when she got stuck in the past trying to kill him as a baby. The feelings she developed for the infant awakened her latent humanity, only to have her discover in the season finale that she was, in fact, a Biotic. Both she and Wolf will encounter different versions of themselves as a result of alternate timelines, and she’ll also develop a “relationship” with Stu Camillo.

Derek Wilson as Wolf: Far more willing to experience the pleasures of a pre-apocalyptic world than his partner, Wolf had a time during Season 1. After gaining an appreciation for the culinary arts from Josh’s parents, he wound up spending years in the 80s as an experimental rock star chef who spectacularly flamed out after opening up a restaurant that served… just look it up. He reunited with Tiger and Josh only to discover Tiger’s true nature in the season finale. Wolf experiences parenthood for the first time as he visits a timeline in which there’s an alternate version of himself who has a child and he takes the place of his counterpart.

Hayley Joel Osment as Stu Camillo: Arguably season 1’s most odious character, Stu has evolved into a slightly nicer version of himself in season 2 – slightly. The Kronish Labs worker spent most of season 1 acting as an annoying (psychotic?) foil to Futturman, Tiger and Wolf, mostly due to his own Napoleon complex. He appears 150 years in the future in Season 1, and as it turns out, has nursed a crush on Tiger that’s lasted for a century and a half after the time the two spent together in season 1. It’s in exploring this relationship the show will feature its first full-length musical number - a 1950s romp starring Coupe and Osment, the look of which evokes La La Land.

While much of Future Man's season 1 supporting cast will not be returning for various reasons, Ed Begley Jr. and Keith David were integral parts of the story and their absence left some narrative room. Luckily, an impressive list of guest stars has been released including Timothy Simons (Veep), Will Forte and Kristen Schall in what could be a fun Last Man on Earth meta collab, Kerri Kenny (Reno 911), and as we've already seen in the trailer, Seth Rogen playing a man named Sue.