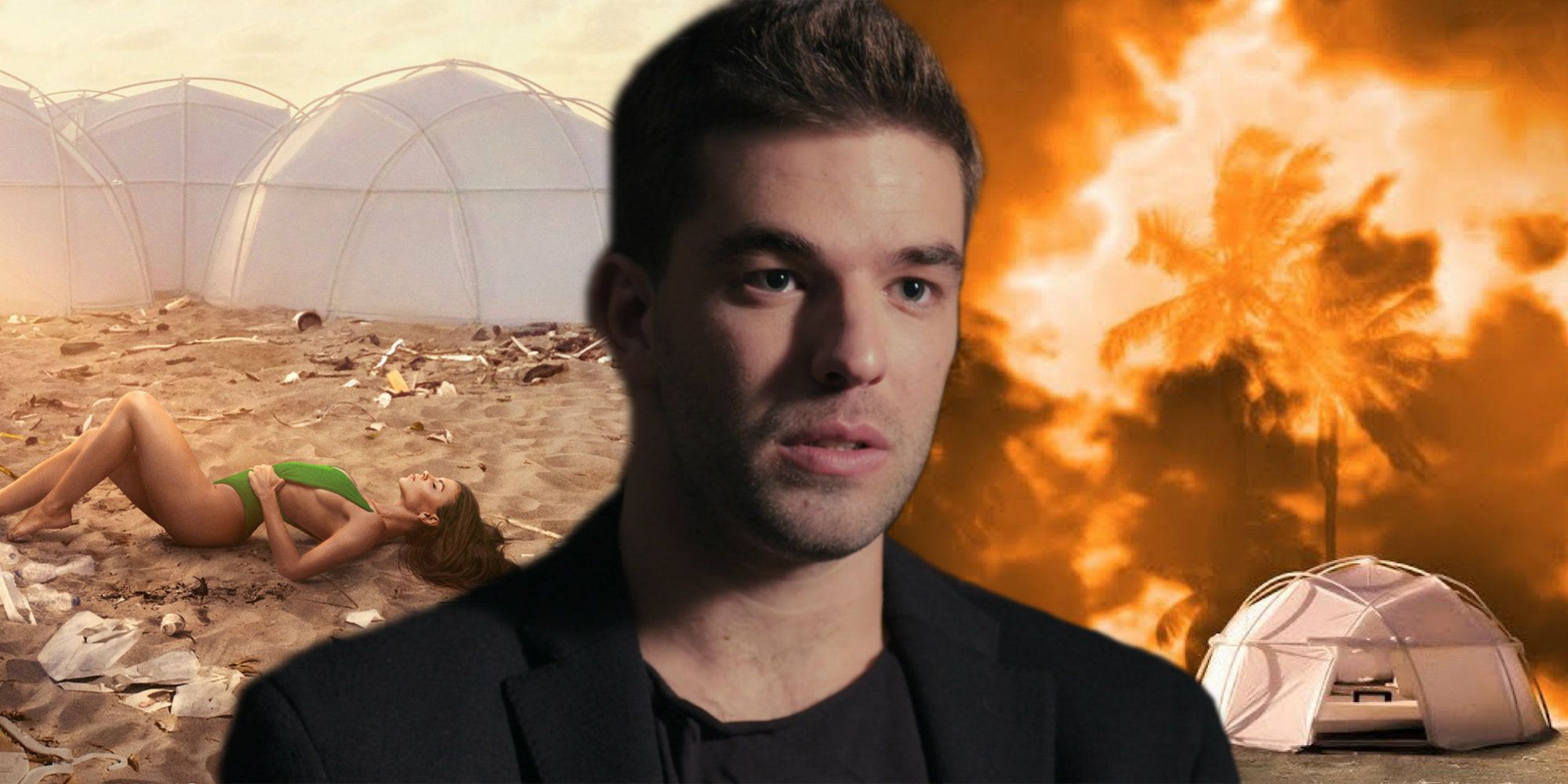 Hulu's Fyre Fraud and Netflix's FYRE: The Greatest Party That Never Happened detail how the disaster of the Fyre Festival came to be - here are the biggest, most shocking reveals from the two documentaries. Scheduled for two weekends in April and May 2017, the Fyre Festival was meant to be an exclusive, high-end event in the Bahamas filled with music, luxury experiences and plenty of partying. What it turned out to be was hundreds of festival-goers sleeping in FEMA tents and fed pathetic-looking cheese sandwiches.

Because the Fyre Festival attracted the kind of people who document much of their lives on social media, the event blew up on social media. Fyre Fest trended on those social media sites, with people at home taking a particular kind of pleasure in watching those who had purchased tickets to the supposedly luxury event suffer without running water and electricity. In the days and weeks after the failed Fyre Festival, its creator - entrepreneur Billy McFarland - was investigated by the FBI for fraud and eventually arrested. Festival-goers also filed lawsuits against McFarland and others involved in the planning and creation of Fyre Fest. Now, two new documentaries have been released diving into Fyre Festival, detailing how the idea came about and where everything went wrong.

Netflix announced its Fyre documentary in December, with the full trailer for FYRE: The Greatest Party That Never Happened arriving earlier this month. However, just four days before FYRE's planned Jan. 18 release, Hulu debuted its own Fyre documentary, Fyre Fraud. Now viewers wanting to gain insight into what exactly happened with Fyre Festival have two options to watch: FYRE directed by Chris Smith or Fyre Fraud directed by Jenner Furst and Julia Willoughby Nason. Here, we break down the most shocking reveals from BOTH documentaries.

By now, most know that Hulu released their Fyre documentary a few days before Netflix's and the reason for this becomes clear toward the end of Fyre Fraud, where it's revealed FYRE was produced in part by Jerry Media, the same company in charge of social media marketing for the festival. Though it's not mentioned in Fyre Fraud, FYRE was also produced alongside Matte Projects, another company that helped advertise the festival.

In the days after Fyre Fraud debuted on Hulu, both docs' filmmakers have commented on the potential ethical quandaries of each film. Fraud co-director Furst told The Ringer they had emails proving Jerry Media employees knew the festival wasn't going as planned and continued marketing it anyway. Meanwhile, FYRE director Smith revealed he was told by McFarland that Fyre Fraud paid him $250,000 for their interview. Furst responded to those claims saying Fraud paid McFarland "less than that" for behind-the-scenes footage and an eight-hour interview. Further, Furst points out that McFarland is a "compulsive liar."

As for Furst and Fyre Fraud's shading of Netflix for working with Jerry Media to produce their documentary, the streaming company responded to The Ringer with a statement about the situation:

We were happy to work with Jerry Media and a number of others on the film. At no time did they, or any others we worked with, request favorable coverage in our film, which would be against our ethics. We stand behind our film, believe it is an unbiased and illuminating look at what happened, and look forward to sharing it with audiences around the world.

So, viewers of both documentaries can draw their own conclusions and decide for themselves who has the ethical high ground here, but one thing is sure: Just like the Fyre Festival itself, the story isn't black-and-white.

Fyre Fraud dives into McFarland's history, detailing his previous business Magnises as well as his start as an entrepreneur. In one particular anecdote, McFarland reveals he started demonstrating a mind for business in second grade when he offered to fix a classmate's broken crayon for a dollar. He then hacked into his school's internet-connected typewriters in order to market this business of fixing broken crayons. However, as McFarland is telling the story, viewers may notice he never actually explains how he fixed those crayons. Did he actually fix them or did McFarland have an idea and sell that idea before figuring out how to make that idea a reality? If it's the latter, it sets an interesting precedent for his later career.

Of all the things Fyre Festival employees spent money on, perhaps the most shocking is how much was spent on booze for the event. Delroy Jackson, a local Bahamian who was hired as a fixer for the festival, revealed in Fyre Fraud that the organizers spent $2 million on alcohol, which meant they had to spend an additional $900,000 in taxes to get that booze into the Bahamas. That's especially egregious when compared to the fact that in FYRE, event producer Andy King revealed he was only given a budget of $1 million for food (the festival did originally plan to spend $6 million on a catering contract, but McFarland fired that company and asked King to find someone else for $1 million a few weeks before the event). So the event spent more than double on alcohol as they did on food.

One controversial point of both Fyre documentaries is the way Jerry Media handled the social media marketing for the festival. While those interviewed by Fyre Fraud shade the Jerry Media employees for deleting negative comments from the festival's social feeds, Jerry Media Mick Purzycki explains to FYRE that they were told by someone at Fyre Media to do so - though it's unclear who exactly gave that order. To be sure, there's still the question of whether an employee should follow a direct order if they believe it to be unethical, and that's arguably one of the major themes of FYRE. Whereas, those interviewed for Fyre Fraud depict it as more of a cut and dry situation, positioning what Jerry Media did as unquestionably wrong.

“Take One Big Thing For The Team”

Perhaps the most shocking moment across both Fyre Fraud and FYRE is the revelation from event producer Andy King in which he details one particular instance when McFarland asked him to "take one big thing for the team." Days before the festival was meant to begin, the organizers learned that Customs was holding the event's bottled water until they were paid the import taxes due on it. Customs was asking for $175,000 in cash that day for the water, but McFarland didn't have the money. So, as explained by King, McFarland asked King, "Will you suck dick to fix this water problem?" And King tells the cameras he went to the Customs office "fully prepared" to do what McFarland had asked of him, but he ended up not needing to. Instead, the head of Customs released the water with the request that they be one of the first ones paid. However, it's unclear if the festival ever paid for that water, though it seems unlikely.

Things Got Dire When The Bahamian Workers Weren’t Paid

In the days after Fyre Festival was cancelled, a number of people went unpaid, including the Bahamians who worked day and night to set up the festival grounds. As explained by the various former Fyre employees in FYRE, some of the Bahamians went to the campground demanding payment and supposedly some put out "hits" to kidnap or injure employees. One local restaurant owner, Maryann Rolle, told FYRE that she ended up paying some of the workers she hired to help feed Fyre employees out of her own pocket - to the tune of $50,000 from her savings. Another Bahamian McFarland hired for the festival, J.R., told FYRE he left his home to avoid being harassed by workers who went unpaid by the event. The failure of Fyre Festival had a huge impact on those in the Bahamas who were scammed out of time, labor and money.

As revealed in Fyre Fraud by Delroy Jackson, McFarland returned to the Bahamas two weeks after the festival failed in order to retrieve the Fyre-branded merchandise that had been left behind. (Side note: It's unclear how much the organizers spent on this merch, but it's money that clearly wasn't spent elsewhere - like on food or accommodations.) The merch had been seized by Customs when the Fyre Festival failed to pay its taxes. As for whether he and McFarland were successful in stealing the merchandise from Customs, Jackson says, "Me ain't never stole any merch," and laughs.

Everyone Knew Fyre Festival Would Be A Disaster - Including Ja Rule

Both Fyre Fraud and FYRE attempt to explore and figure out where exactly the Fyre Festival went wrong - was it doomed from the start because of McFarland's involvement or were others also responsible for the resulting disaster? Across both documentaries, it becomes clear that a number of things contributed to the Fyre Festival getting to the point it did, not least of which being McFarland's insistence in keeping it going and his employees following his lead despite their own reservations. According to multiple interviewees, both McFarland and Ja Rule were warned Fyre Festival would be a disaster, but they kept it going anyway.

One particularly telling comment comes in FYRE from music festival consultant Marc Weinstein when recalling the night before the festival was to launch. Though he's not sure it's 100 percent accurate, he says that when it started raining hours before guests were meant to arrive, soaking the tents and mattresses, someone commented, "At least they won't get away with it now." That comment goes to show how seemingly well known it was the festival wouldn't go well, though whether the employees knew it would be as much of a disaster as it ended up being is up for debate. Much of the latter half of FYRE features the various employees ruminating on their responsibility in Fyre Festival and the guilt they still feel over the event.

Fyre Fraud is currently available to stream on Hulu, while FYRE: The Greatest Party That Never Happened is on Netflix.