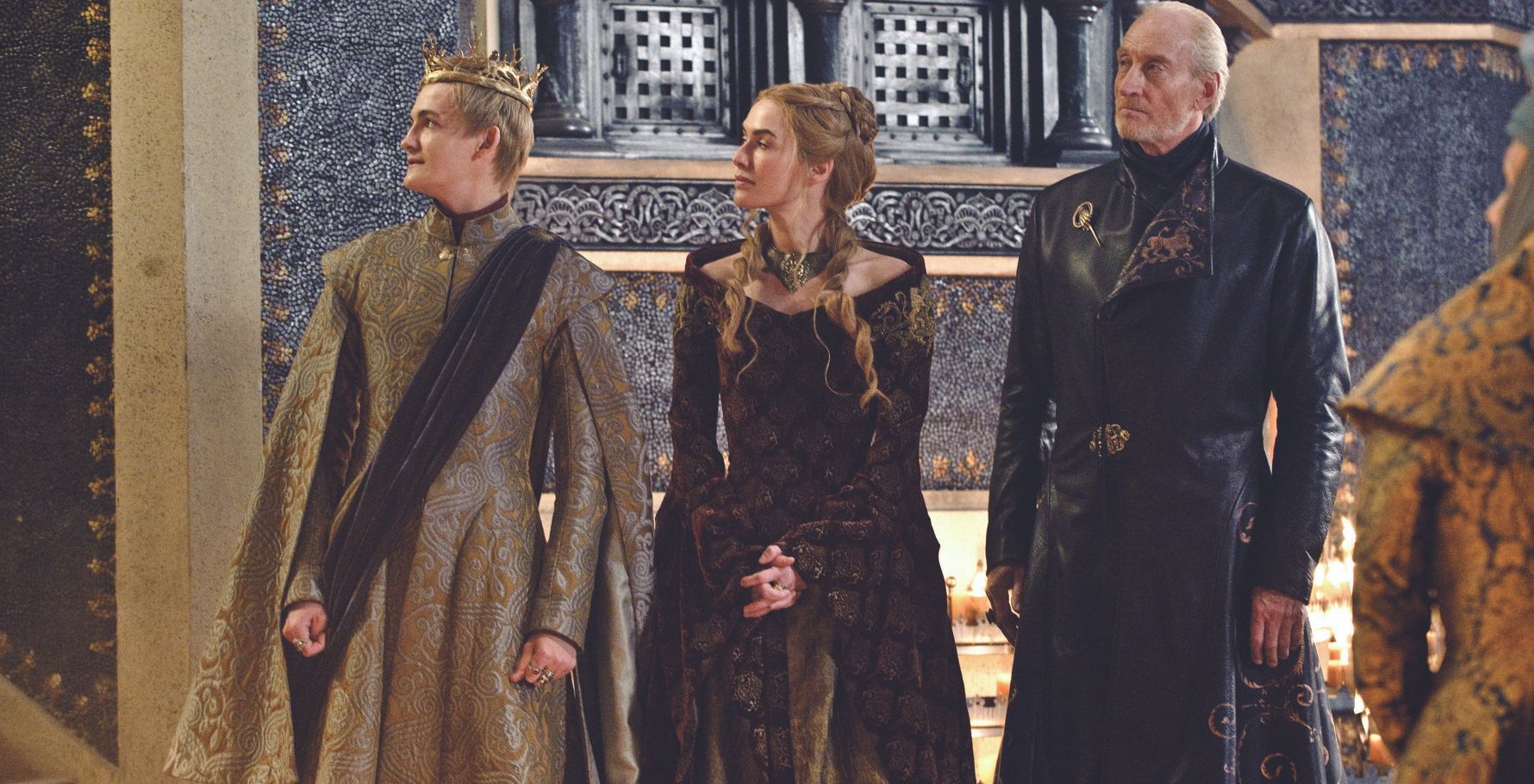 House Lannister is actually my favorite Game Of Thrones house, and I feel like people kind of judge me when I say that. I understand why, of course. When the books and show start out, they’re painted as the one-dimensional villains; the people you couldn’t possibly empathize with or agree with. But as time moved on, we came to know them more and just how complex they were. Honestly, fight me — no characters had better development than this family.

So here are 10 facts about the Lannisters and just how interesting they actually are as an ancient great house and a current complicated family.

10. Their Official Words Are 'Hear Me Roar'

Like every other great house, they have official words: hear me roar. This is probably because their sigil is a lion and, of course, has to do with House Lannister painting themselves as the most intimidating house. Everything about them is designed to inspire fear, and it’s easy to see why when you look at Westeros as a whole. With constant wars and families turning on families, the throne being usurped, and the world being conquered, why wouldn’t you want to establish yourself as a family not to mess with?

So, yes — their house words are pretty perfect for that purpose. Short, sweet, and to the point! Fear them.

9. But They Have Unofficial Words, Too

The Lannisters are, however, the only house who seem to have unofficial words, too. Although “hear me roar” is their official motto, the one we tend to hear most is, “a Lannister always pays their debts.”

It might not be the official statement of their family, but it’s the one they seem to take most seriously. None of them like to owe anyone else anything — even Tyrion, who doesn’t seem to take the family’s legacy to heart or think he lives up to it, pays off his debts. The Lannisters are a very proud family who likes to be completely independent and therefore if you do a favor for one of them, you can be pretty sure they’ll repay it.

Of course, it also works the other way, too; do them a disservice, and you’ll make an enemy of this family.

8. They Are The Wealthiest Family In The Realm

They are the richest family, there's no doubt about it. With their huge military and the gold that Casterly Rock mines, they definitely have the most money — even more than the Crownlands. This is something that Lord Tywin Lannister especially used to his advantage since he could fund things for the crown and his gold was extremely influential in wars.

They aren’t humble about this either. When Jaime was in the Kingsguard—although he wore the white cloak required—he also wore a plate of gold armor instead of the customary white, just to show off the fact he was a Lannister. This family don’t know the meaning of the word humility.

7. They Once Had A Valyrian Steel Sword… But Lost It

Valyrian steel swords are the best swords money can buy in Westeros. Valyrian steel, however, is extremely rare, hard to come by, and hard to work with, so swords made of this are very few. The Lannister family actually had one that was passed through generations, named Brightroar (seems appropriate for the gold lion family, right?). It was lost by Tommen II Lannister when he sailed to the ruined Valyria, though he never returned with his fleet, meaning Brightroar was lost forever.

Gerion Lannister went in search of the sword right before the beginning of the series, but he never returned. Seems Brightroar is destined to be lost.

6. They Weren’t Always Quite So Intimidating

It’s hard to imagine that the Lannisters were ever anything other than extremely intimidating. Tywin Lannister is so tough that we think his parents must surely have been that way too, but it’s not the case. His father, Tytos, was actually perceived as being very weak by his vassals. He was a man who liked humor, and tended to be very warm, but those qualities weren’t enough to rule the Westerlands and eventually, House Reyne, a vassal family, actually rebelled against him.

Hard to imagine anyone having the guts to do this to Tywin, but they did it to Tytos.

5. Their Anthem Is 'The Rains Of Castamere'

House Reyne, of course, did not last long.

Tytos Lannister may not have been tough enough to defeat them in the Civil War of Lions, but Tywin Lannister marched on them and brutally destroyed their entire house for his father. He despised the weakness his family was showing and restored the reputation of the Lannisters as a family not to be messed with.

The story was immortalized in the song "The Rains Of Castamere." It’s often played in the series, even now with the Lannisters using it as a warning anthem; and oh, does it work. Even the first notes chill me, to be honest.

4. Joanna And Tywin Were Cousins

Although Jaime and Cersei’s… erm, relationship, is treated with contempt, the Lannisters aren’t totally against keeping it in the family. Within… er, reason?

Tywin and Joanna were actually cousins when they were married, which no one seems to see a problem with, so apparently, it is totally acceptable for cousins to marry. It almost makes sense for the Lannisters too, when you think about it; they’re so proud that I’m sure Tywin thought no one was good enough for him except someone else with the surname Lannister.

At least he really seemed to love Joanna, questionable aspects of their relationship aside.

3. There Are Some Conspiracy Theories About Jaime, Cersei, And Tyrion’s True Parents

King Aerys took a liking to Joanna, and it’s said he was so disrespectful about it that Tywin eventually turned against him. For this reason, there’s a lot of speculation that either Tyrion or the twins aren’t actually Tywin’s children, but are Aerys’.

For Tyrion, it’s because he doesn’t look much like a Lannister, whereas with the twins, it’s because there’d be some powerful irony in Tyrion being Tywin’s only trueborn child. Can you imagine if one or two of the Lannisters did turn out to be a Targaryen, though? With the Jon revelation, there are surely many Targaryens that can be secretly running around.

RELATED: Tyrion Lannister Is (Mathematically) The Protagonist Of Game Of Thrones

Their sigil is a lion, but that’s not the only lion present at Casterly Rock — they actually keep pet lions there.

Tyrion and Jaime both recall seeing them in the bowels, and Jaime remembers Cersei sticking her hand through the cage and calling him a coward when he yanked her away and refused to do the same. I can only imagine the logistics of actually trapping lions and keeping them... Does this mean that there are wild lions running around the Westerlands? We have so many questions about the creatures of Westeros’ animal kingdom and how exactly their wildlife functions.

Of course, the Lannisters have pets this extravagant.

RELATED: 12 Things You Need To Know About Tyrion Lannister

1. They Aren’t All Villains

It’s easy to think of the Lannisters as all being mean, rich overlords. They’re pretty much painted that way at the start of the series. But each of them is complicated, and none of them are the worst characters in the series. Tyrion is broken by his childhood and upbringing, certainly a bit twisted at points but a product of circumstance. Jaime, although less obviously damaged on the surface, is the same way. Cersei is by far the most malicious of the three but even she had an awful childhood that has definitely warped her into who she is now.

And each of them are very, very complicated.

NEXT: Ranked: Game Of Thrones Characters Most Likely To Win The Iron Throne

This entry was posted by Screen Rant on January 21, 2019 at 11:01 am, and is filed under TV News. Follow any responses to this post through RSS 2.0. You can skip to the end and leave a response. Pinging is currently not allowed.