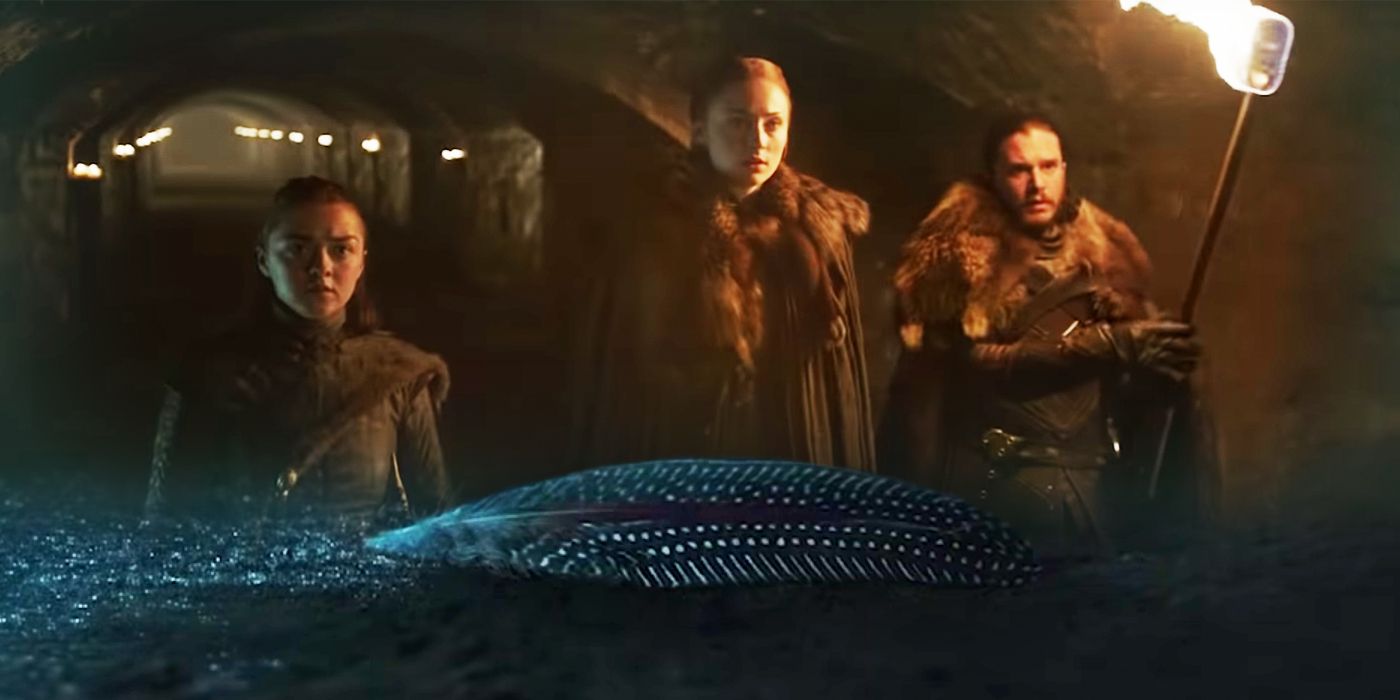 A brand new teaser has been released for the eighth, final season of Game of Thrones and there's plenty of Stark-based symbolism to analyze and explore over the next few months. Game of Thrones fans have had an extended wait for this final chapter in David Benioff and D.B. Weiss' A Song of Ice and Fire adaptation and although the forthcoming season is only six episodes in length, the run promises to be the most epic and cinematic yet.

Unveiled under the title "Crypts of Winterfell", the latest teaser focuses on Jon Snow, Sansa Stark and Arya Stark, three of the remaining four Stark children. Each character walks through Winterfell's labyrinthine crypt and passes statues of deceased ancestors, while quotes from previous episodes echo ominously in the background. Finally, the three Starks meet in front of a row of statues representing themselves and are followed by an icy wind, clearly intended to show that winter has now very much arrived and is headed directly for Winterfell.

Intended to both build excitement and reveal the Game of Thrones season 8 premiere date as April 14th, the teaser contains plenty of callbacks to Westerosi history, as well as some odd moments that hint at a deeper level of meaning. Since Game of Thrones has now completely overtaken its source material, plot clues are guarded more closely than ever before but, fortunately, that's unlikely to prevent fans from seeking answers in this latest video. Here are all the clues regarding the fate of the Stark family in the "Crypts of Winterfell" teaser.

Where Are All Of The Quotes In The Game of Thrones Season 8 Teaser From?

As Jon wanders the cold, dark crypt, torch in hand, he passes the statue of his biological mother, Lyanna Stark and seems to hear her say "you have to protect him." These words were uttered by Lyanna during a flashback scene in the season 6 finale episode, "The Winds of Winter", to Lyanna's brother Ned after she gave birth to Jon in the Tower of Joy. By "protect him" Lyanna meant for Ned to keep Jon's heritage a secret, as had Robert Baratheon known that Jon's father was Rhaegar Targaryen, he would've surely been killed or exiled.

Next is Sansa, who confidently strolls past a statue of her mother, Catelyn, and the accompanying quote on this occasion is "all this horror that's come to my family is all because I couldn't love a motherless child". Killed during the bloody Red Wedding, Catelyn's quote comes from season 3's "Dark Wings, Dark Words" and was said during a scene with Talisa. Catelyn's line is certainly a bittersweet one in hindsight, as while her difficulty in loving Ned's bastard child is understandable, the fact that Catelyn died never knowing the truth, that Ned was loyal and Jon was merely his nephew, adds to the tragedy of the character.

Finally, Jon finds himself walking past the statue of Ned, as the solemn tones of Sean Bean whisper "you are a Stark. You might not have my name; you have my blood." Spoken to Jon, this line is taken from Game of Thrones' second episode, shortly before the young man leaves to join the Night's Watch. Once again, more recent events have cast a new light on this sequence and it's likely that Ned was speaking more literally than Jon realized at the time.

One of the biggest talking points raised by the teaser is whether or not Jon's statue looks older than the other two. While this could simply be down to the stony, gray design of the statue, many Game of Thrones fans have suggested online that Jon's statue is of an older Jon, while the two statues depicting Sansa and Arya show the girls as they currently are. Indeed, the facial lines of Jon's statue do appear noticeably more sullen and the beard is fuller than that of Kit Harington's character. It's also worth considering that Jon is 14 years old at the outset of George R. R. Martin's book series and while this certainly isn't the case for the television version of the character, HBO's Jon is still intended to be somewhat younger than Harington himself. This makes the statue's mature appearance even more curious.

If Jon's statue is intended to look older, this could perhaps suggest that he'll be one of the lucky few characters to actually survive to the end of Game of Thrones season 8 and go on to die at a ripe old age, unlike most of his relatives.

It's also interesting that all three quotes featured in the teaser revolve around Jon's parentage. Game of Thrones has already confirmed the long-held theory that R+L=J and last season saw Samwell Tarly discover this shocking secret for himself. Jon, on the other hand, is none the wiser and accidentally slept with his aunt. The prevalence of these quotes in the teaser might hint that even though Jon's parentage is now confirmed, the revelation still has a significant part to play in the forthcoming season.

Page 2 of 2: The Stark Children & Feather In The Game of Thrones Season 8 Teaser

Reveals About Sansa And Arya In Game of Thrones

If Jon's statue is older than his current self, do Arya and Sansa's statues represent a foreboding omen for the women of House Stark? Both girls' statues have a distinctly youthful look and their clothing suggests that these two constructs are intended to represent the characters at the age they will be in Game of Thrones season 8. The presence of Arya's sword, Needle, and Sansa's Lady of Winterfell necklace seem to confirm this. This could potentially point to both women meeting their demise before the show's conclusion. While this would certainly be shocking, it's not like Game of Thrones to pull any punches.

Another notable point in the teaser is that Arya is the only member of this Stark trio not to walk past a statue or hear the echoing voice of an ancestor. Jon walks past Lyanna and Ned, seemingly hearing both, and Sansa strides past Catelyn, giving a quick glance along the way. Arya, however, walks alone through a corridor until finally reaching her sister and cousin. This is certainly an odd choice, as the clip features three Stark children and three ancestor statues and it would be more natural to split them evenly. Perhaps the most obvious explanation for this is that the teaser is metaphorically highlighting Arya's distance from House Stark. Since becoming one of the Faceless Men, Arya has turned somewhat cold-hearted and is fighting more out of love for her family than for the future of her House, unlike Jon and Sansa who are motivated by both.

Related: Game of Thrones Mysteries The Long Night Can Answer

The Feather In The Game of Thrones Season 8 Trailer

The Game of Thrones teaser also prominently features a feather and while viewers will need a good memory to recall the history of this item, it has appeared in Game of Thrones several times before. The feather was laid upon Lyanna's statue by Robert Baratheon in season 1, only for Sansa to replace it with a candle later on. Quite why the feather reemerges in the season 8 teaser is unclear and while it could be little more than Easter egg, it could also add further weight to the argument that Jon's parentage will play a huge role in the final six episodes. The feather represents Robert's love for Lyanna and to see it fall and freeze in the teaser represents the final death of that love, perhaps because Lyanna's true husband is soon to be revealed to the world.

Where Art Thou, Bran?

As the only Stark child not to feature, Bran's omission from the teaser is undoubtedly strange. Practically speaking, walking dramatically down a corridor doesn't immediately play into Bran's strengths but there are plenty of ways to get around this issue, whether that be having him sitting in his chair gazing at the statues, or showing him already waiting for the other three at the point where they all meet. Consequently, there has to be some kind of meaning in Bran's omission.

Some fans may simply argue that Bran isn't actually "Bran" anymore, he's the Three-Eyed Raven and is therefore exempt from any Stark-related nostalgia business. However, as explored above, the same could be also said of Arya. Alternatively, it's possible that Bran's absence hints towards a popular Game of Thrones fan theory coming to fruition.

As demonstrated in the dreadfully upsetting "The Door," Bran's Three-Eyed Raven powers allow his consciousness to traverse time and this can have devastating effects in the past, present and future. Many viewers and readers have theorized that, using a similar method, Bran could actually become the Night King that currently threatens Westeros. Essentially, the theory posits that, in an attempt to save the world, Bran goes back in time to warg into the human who is stabbed with dragonglass to become the Night King.

However, it has already been established that spending too much time in "warg mode" can mean getting trapped and, with so much at stake, Bran's mind could accidentally become embedded permanently in the Night King's body. There are numerous lines of dialogue that support this theory, such as Bran being told he will "fly" and the Night King going on to acquire one of Daenerys' dragons.

If the statues in the Game of Thrones season 8 teaser show whether or not the characters will live or die, Bran's complete absence could mean that, by the final credits, he will be neither dead or alive, but in a state of perpetual undead cold.

Ahead of season 6, Game of Thrones released a Hall of Faces-themed teaser that many claimed was foreshadowing events such as the arrival of Lady Stoneheart and the death of Tyrion. Ultimately, nothing of the sort came to pass; it was just a teaser and it's entirely possible that the same could happen this time around. However, reading deeply into the slightest detail is par for the course in Game of Thrones and, frankly, all part of the experience. It'll be fascinating to see whether or not anything hinted at in this teaser eventually comes true.

Next: 10 Major Things HBO Left Out Of Their Game Of Thrones Adaptation