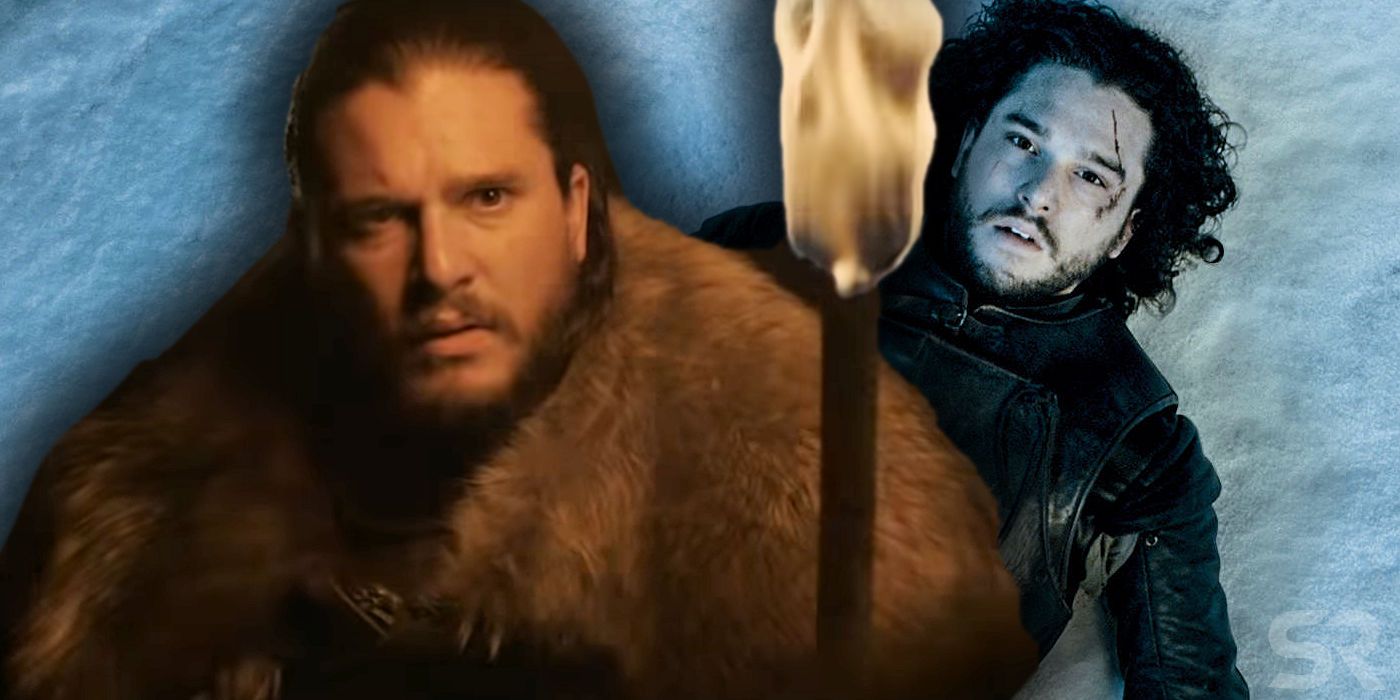 Jon Snow's death may have been teased in the latest Game of Thrones season 8 teaser trailer. For quite some time now, it's been known that Kit Harington's Jon Snow will play an integral role to the end of Game of Thrones, not to mention the conclusion of the war with the White Walkers. Ever since the start of the series, Jon Snow has been at the forefront of the battle with the White Walkers, even though he's been removed from everything else plaguing the southern region of Westeros - but that all changed in Game of Thrones season 7.

With Jon Snow pledging himself to Daenerys Targaryen - and, thus, forcing Sansa to break a longstanding Stark tradition by also bending the knee to Daenerys - the Starks have chosen a side in the war for the Iron Throne. But, more importantly, the Starks are still on the frontline of Westeros' defense against the Night King and his Army of the Dead. Because of everything coming to an end in Game of Thrones season 8, fans have obviously been wondering just who will survive. With four Stark children still alive, most - if not all - of them will presumably die. And now it seems like the latest teaser trailer has hinted at Jon Snow being one of them.

Towards the end of the Game of Thrones season 8 teaser (which released in front of the True Detective season 3 premiere), Arya, Sansa, and Jon unite for the first time in years, inside the Crypts of Winterfell, and gaze upon newly erected stone statues of themselves. While Arya and Sansa's statues accurately resemble them, Jon's statue looks nothing like him; he appears quite older. Plus, Jon's reaction to seeing the statue is quite suspect, as he seems confused and even irked.

Sure, the Game of Thrones season 8 teaser is more than likely footage made specifically for the teaser, and therefore will not appear in season 8,but all three of them having statues in the Crypts of Winterfell is something that HBO absolutely wants to tease fans with, specifically, because it implies that all three of them are dead. But that may not be the case, at least not entirely and certainly not right away. Arya and Sansa's statues resembling them as they currently are could easily be a misdirect. Instead, the one person who seems to be the best candidate for being killed off is Jon Snow.

Viewers may recall a conversation Arya and Sansa had in the Crypts of Winterfell when they were observing Ned Stark's statue. Ned's statue, like Jon's, looks nothing like him, something that Arya noticed straight away. "It doesn't look like him. Should have been carved by someone who knew his face," she said; Sansa replied, "Everyone who knows his face is dead." For whatever reason, Jon Snow may die fighting the White Walkers - perhaps sacrificing his life to end the war - and his statue may ultimately be carved by someone who didn't know his face. Since he was always considered an illegitimate child, it would make sense that he would've been disregarded.

More: Game of Thrones Season 8: Every Update You Need To Know