« EA Cancelled Star Wars Game To Rush Another Star Wars Game
Spider-Man: 13 Confirmed Theories About Far From Home (And 13 We Hope Are True) » 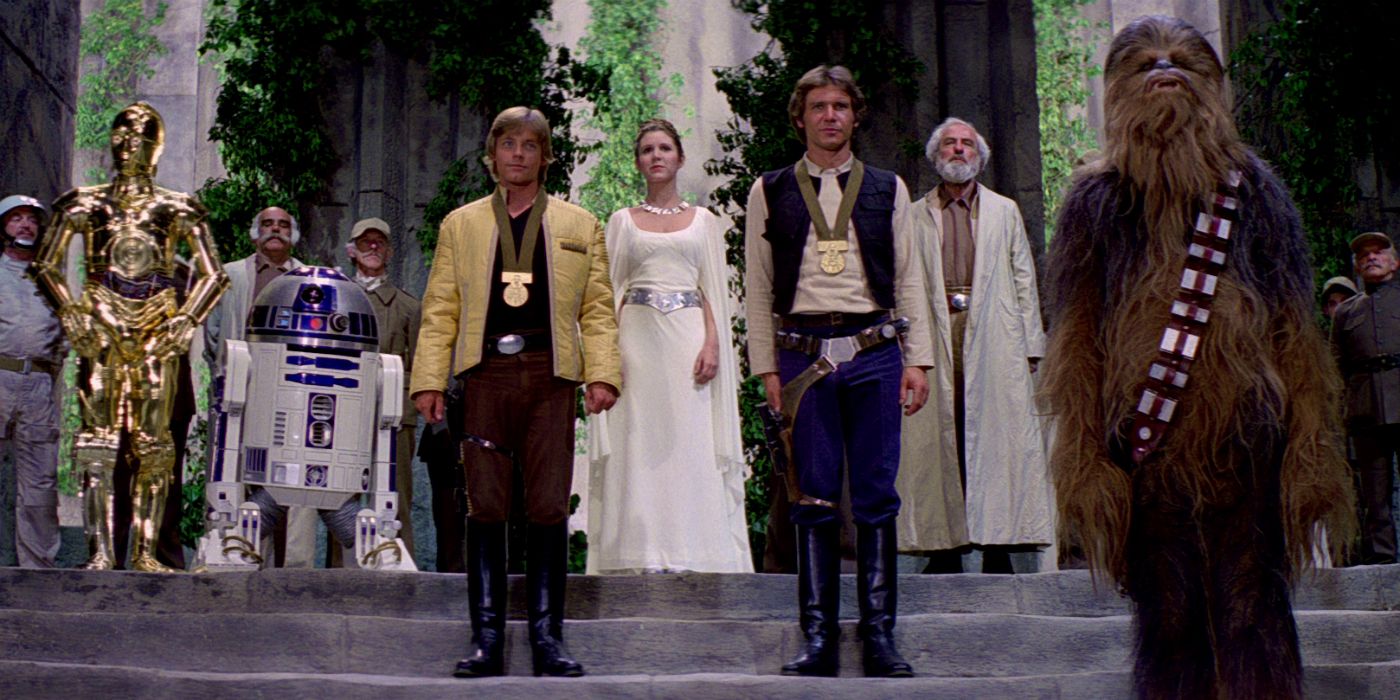 George Lucas explained why Chewbacca wasn't given a medal at the end of Star Wars: A New Hope all the way back in 1977. The first Star Wars film ends on an upbeat note, with the heroes recognized for their bravery in taking down the First Death Star. At the time, nobody realized the franchise would still be going on over 40 years later, so the Rebel ceremony could easily have been the end of the saga.

And yet, that awards ceremony has proven quite controversial. Although the first Star Wars film is well known for its portrayal of a galaxy full of diverse alien races, the awards ceremony appears to imply the Rebel Alliance didn't honor aliens the way they did humans. Luke Skywalker and Han Solo both get a medal; curiously, Chewbacca doesn't.

Oddly enough, for all the heat this scene has generated, George Lucas actually gave his response to the issue all the way back in 1977. That summer, Lucas recorded a number of in-character spots to expand his universe. These aren't necessarily considered canon anymore - one of them gave a backstory for Han Solo that's very different to the tale told in Solo: A Star Wars Story - but perhaps the most interesting among them is an explanation for why Chewbacca didn't get a medal in the ceremony. He said:

"Chewbacca wasn't given a medal because medals don't really mean much to Wookiees. They don't really put too much credence in them. They have different kinds of ceremonies. The Wookiee Chewbacca was in fact given a great prize and honor during a ceremony with his own people. The whole contingent from the Rebel Alliance went to Chewbacca's people and participated in a very large celebration. It was an honor for the entire Wookiee race."

In this case, the quote may well be canon. Back in 2015, Marvel Comics published a Chewbacca miniseries by writer Gerry Duggan and artist Phil Noto. Set shortly after the events of Star Wars: A New Hope, the story sees Chewbacca build a friendship with a young girl called Zarro. Zarro was able to understand Wookiee, which meant the two could interact directly. At the very end, Chewbacca and Zarro parted ways, and Chewbacca gave her a gift - his own Rebel Alliance medal. It proved that he'd received one at some point, suggesting there really was another medal ceremony involving Chewbacca. When Zarro objected to this gift, Chewbacca insisted he didn't want the Medal in the first place. "Yeah, it would kind of clash with your whole warrior vibe," she agreed with him.

This is, of course, rather a convenient explanation. It may well reflect Lucas' attempt to defuse early criticism; alternatively, it may also suggest that Lucas was already growing interested in exploring Kashyyyk, the planet of the Wookiees. He'd decide to explore Kashyyyk in detail just a year later, in the much-reviled Star Wars Holiday Special. For the record, though, according to CinemaBlend, Peter Mayhew believed there were much more practical reasons. "One, they didn’t have enough money to buy me a medal," he explained. "Or two, Carrie couldn’t reach my neck, and it was probably too expensive to build a little step so that I could step down or she could step up and give me the medal."

More: Han Meeting Chewie Was So Much Better In The Early Solo Script

This entry was posted by Screen Rant on January 19, 2019 at 12:01 pm, and is filed under TV News. Follow any responses to this post through RSS 2.0. You can skip to the end and leave a response. Pinging is currently not allowed.