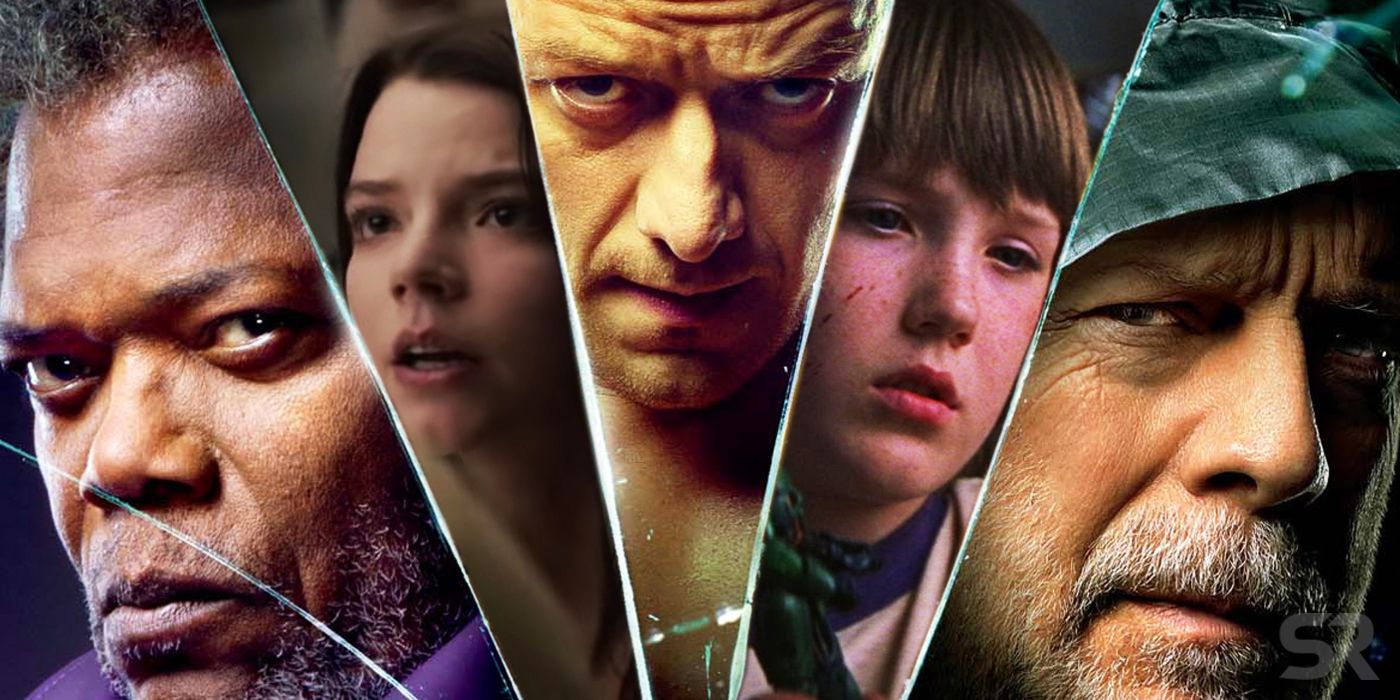 Glass brings together the characters from M. Night Shyamalan's Unbreakable and Split, while also expanding the world. Who's a returning character and who's new to the cast?

Shyamalan had long teased a sequel to Unbreakable, but in the end it released as something of a surprise. Split was a horror movie starring James McAvoy as a man with 24 different personalities that mostly took place in one location. But then, in one final twist, a Bruce Willis cameo revealed it was all in the same world. The core idea of this shared universe is that superheroes live among us, or that individuals can manufacture themselves as such purely through the power of self-belief.

That is the thesis of Glass, the culmination of this trilogy two decades in the making. The new film features some familiar faces as well as some brand new characters, which can all be quite confusing even if you've seen all the previous movies. Here's who's who in the cast of Glass.

Bruce Willis - David Dunn/The Overseer: David has the ability to see the crimes others have committed just by touching them, superhuman strength and stamina, and unbreakable skin, but also a fear of drowning. He now works with his son to protect the people of Philadelphia from criminals.

Samuel L. Jackson - Elijah Price/Mr. Glass: Born with Type I osteogenesis imperfecta, meaning his bones fracture easily, Elijah Price is currently incarcerated in a secure mental facility after the extent of his mass murders were discovered. In particular, he caused the Eastrail 177 crash, which no one survived other than David Dunn.

Spencer Treat Clark - Joseph Dunn: Joseph is David's son, who has always believed in his father's powers and regarded him as a superhero. He now works with his father. Aside from Unbreakable, Spencer Treat Clark will be recognizable as Werner von Strucker in Agents of S.H.I.E.L.D. and Adrian in Animal Kingdom.

Charlayne Woodard - Mrs. Price: Elijah's mother has always taken care of her son due to his fragility, and firmly believes he is special, no matter what others think of him.

James McAvoy - Kevin Wendell Crumb/ The Horde: A man with 23 very distinct personalities, each of which causes his entire being to change. The 24th personality is The Beast, a super strong, dangerous character who feasts on girls captured by the others. Kevin's other personalities include Patricia, an orderly, strict English woman, Hedwig, a nine-year-old boy, and Orwell, an introverted man. In Split, one of Kevin's personalities, Dennis, took three girls hostage, intending to sacrifice them all to The Beast. In Glass, McAvoy plays more personalities than we saw in Split.

Anya Taylor-Joy - Casey Cooke: Casey was abducted by The Horde in Split. She was intended to be sacrificed to The Beast, but seeing her broken nature, she was left. She has a history of sexual abuse at the hands of her uncle, and self-harm. In Glass, she attempts to help Kevin.

Glass Theory: James McAvoy's Split Character Was In Unbreakable All Along

Sarah Paulson - Dr. Ellie Staple: A new character, but one who was potentially introduced in Split, Dr. Staple is a psychiatrist who specializes in treating patients with "delusions of grandeur," in particular those who are convinced they are superheroes. She is head of the facility where Elijah Price is being held, and when David and Kevin are brought in, she treats them too.

Luke Kirby - Pierce: One of Elijah's security guards, Pierce treats his patient with contempt. Kirby has appeared in a variety of movies, including A Dog's Purpose and Take This Waltz.

Adam David Thompson - Daryl: Another of Elijah's guards, Daryl believes he's got a friendly relationship with the patient. Thompson is perhaps best known for his key role in Netflix's Godless.

Next: The Most Brutal Reviews of Glass