« 9 Things You Missed In The Spider-Man: Far From Home Trailer
Best Standup Specials To Stream On Netflix » 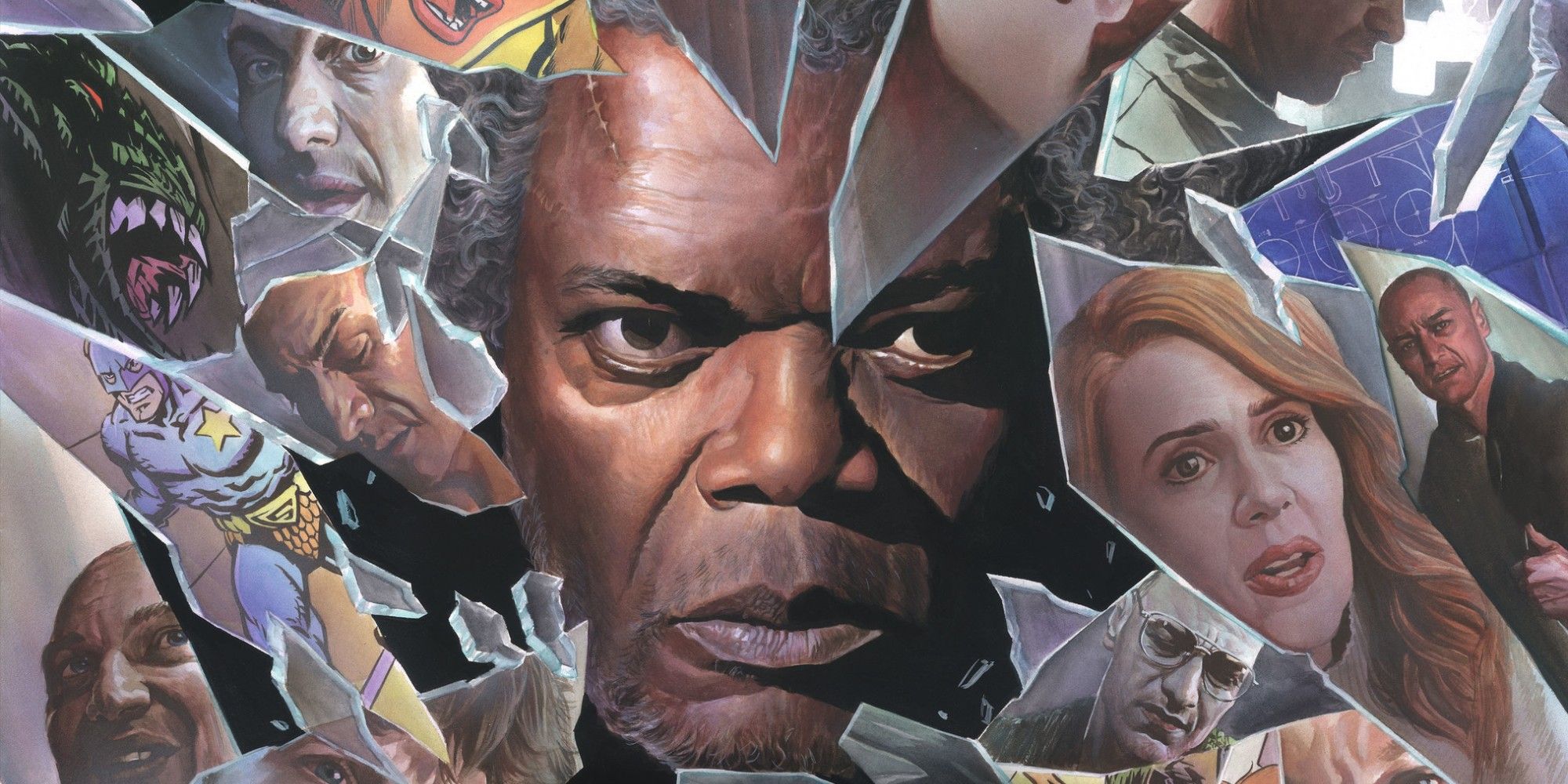 Glass concludes Shyamalan's superhero movie trilogy in a manner that manages to be absorbing, frustrating, and bewildering at the same time.

M. Night Shyamalan has certainly had his fair share of ups and downs since his early career triumphs on The Sixth Sense and, to a lesser degree, Unbreakable. Now, two years after the writer/director delivered Split - a secret followup to Unbreakable and his most widely celebrated movie in a long time - he's back with Glass, a project that brings the characters of Unbreakable and Split together in an all-new thriller about superheroes in the real world. Even in the age of the MCU and DCEU, there's something truly unique about the way Shyamalan approaches the idea of comic book superheroes in his latest film... which is not to say it's necessarily good, either. Glass concludes Shyamalan's superhero movie trilogy in a manner that manages to be absorbing, frustrating, and bewildering at the same time.

Glass picks up after the events of Split, which concluded with Kevin Wendell Crumb (James McAvoy) being taken over by his more dominant personalities (aka. the members of The Horde), including the super-human being known as The Beast. Unbreakable's David Dunn (Bruce Willis) now runs a home security business and secretly fights crime in Philadelphia as "The Overseer" - among other nicknames - with the help of his fully-grown son Joseph (Spencer Treat Clark). Together, David and Joseph are able to track The Horde and discover where they've been hiding, after they kidnap yet another group of young girls to sacrifice to The Beast. However, the subsequent showdown between David and The Beast is cut short when the police arrive to arrest them, led by one Dr. Ellie Staple (Sarah Paulson).

Dr. Staple, it turns out, is a psychiatrist who specialize in treating people who believe they are superheroes, and has David and Kevin brought to Raven Hill Memorial: the same institution for the criminally insane where Elijah Price aka Mr. Glass (Samuel L. Jackson) has resided, ever since he was arrested for his crimes at the end of Unbreakable. As Staple attempts to convince the three men that they are not the comic book characters they believe themselves to be, Elijah takes advantage of his new inmates' arrival to set his own plan in motion - one that will finally force the world to see that superheroes really do exist. Meanwhile, Joseph, Eljiah's mother (Charlayne Woodard), and Casey Cooke (Anya Taylor-Joy) - the only regular person to survive their encounter with The Beast - attempt to save the three men from a dark fate, before it's too late.

Despite what its title implies, Glass isn't so much a movie about Elijah (or any one character) as it is a film about what he believes: that extraordinary people have always walked among us and have inspired our myths throughout history, comic books included. At the same time, the movie revisits a key idea from Unbreakable and Split - that people can discover the extraordinary in themselves through the power of belief - and brings it to the forefront, in order to tell a story about why it's important for the world to see people as they truly are. These themes are fascinating enough to carry Glass through its first two-thirds, despite the familiar flaws in Shyamalan's screenwriting (like his habit of writing stilted dialogue) and the sometimes clunky ways he weaves loose plot threads from Unbreakable and Split together. Unfortunately, the film goes off the rails when it gets to its big third act twists - some of which are predictable, others of which are poorly-executed and more likely to confound moviegoers that amaze them or get them thinking.

In general, Glass' issues lie with its execution, not its core themes or concepts. Shyamalan, as he did in Unbreakable, aspires to deconstruct the tropes of superhero and comic book stories through dialogue, but what might've once felt like necessary exposition - like the scenes where Elijah explains basic comic book storytelling to others - now feels out of touch, in the modern era of superhero movies. Where something like last year's Spider-Man: Into the Spider-Verse was aware that moviegoers have a pretty good understanding of the superhero genre now and took this into consideration, Glass seems to think audiences need even the most basic of plot beats spelled out for them. It's a familiar case of a film that violates the "Show, don't tell" rule all too often and results in some impressively campy moments, including a soon-to-be-infamous shot where Jackson practically breaks the fourth wall while delivering his line to the camera.

On the plus side, Jackson relishes the scenes where Glass allows him to ham it up, and for the most part these moments are (apparently) meant to feel more theatrical than the rest of the film. McAvoy also seems to be having a blast here, especially since he gets a chance to play several other personalities that weren't featured in Split, in addition to the key members of The Horde from that film. Willis delivers the most grounded performance of the three leads, but his turn as a far older and wiser David Dunn is some of his best acting since Moonrise Kingdom... which is another way of saying he actually commits to the role he's playing, for the first time in a hot minute. Sorry to say, though, with so much of the focus on the film's main three, the supporting players in Glass are relegated to serving as glorified plot devices. That's all the more disappointing when it comes to Taylor-Joy's Casey Cooke (who, after all, was also a lead in Split).

Like the rest of the film, Shyamalan's direction here is a mixed bag. Glass is arguably best during the segments that play to Shyamalan's strengths as a storyteller who excels at creating suspense through his camerawork and editing. The movie is also pretty effective at making the interiors of Raven Hill Memorial feel claustrophobic and austere, thanks to a combination of Split DP Mike Gioulakis' inventive shot choices and the way Shyamalan integrates bolder colors (purple, yellow, and green) into the toned-down hues of the film's sets, for symbolic purposes. At the same time, Glass struggles to stage the fights between David and The Beast in a clear and cohesive fashion, resulting in some ungainly action sequences that plays out as a series of striking wide shots strung together by awkward closeups. As a result, Split composer West Dylan Thordson's score tends to be more threatening and heart-pounding than whatever's actually happening in these scenes.

On the whole, Glass isn't a bad film so much as a weird and messy yet otherwise ambitious one that embodies both Shyamalan's best and worst tendencies as a storyteller. It's a misfire that fails to reach the bars set by Unbreakable and Split, but a captivating one that's unmistakably its creator's invention and allows him to end his unconventional superhero trilogy on his own terms, be that for the better or not. For the same reasons, Glass might end up being one of Shyamalan's most polarizing offerings in some time. It's certainly not the Unbreakable sequel that many people have spent nearly twenty years hoping for but, then again, it's probably safe to assume this entire trilogy took on a very different form than what Shyamalan originally envisioned, all those years ago. However the rest of 2019 plays out, it's hard to imagine there will be another superhero movie quite as memorably strange as this one.

Glass is now playing in U.S. theaters nationwide. It is 129 minutes long and is rated PG-13 for violence including some bloody images, thematic elements, and language.