Glass Reviews Are Being Too Hard On M. Night Shyamalan’s Unbreakable Sequel 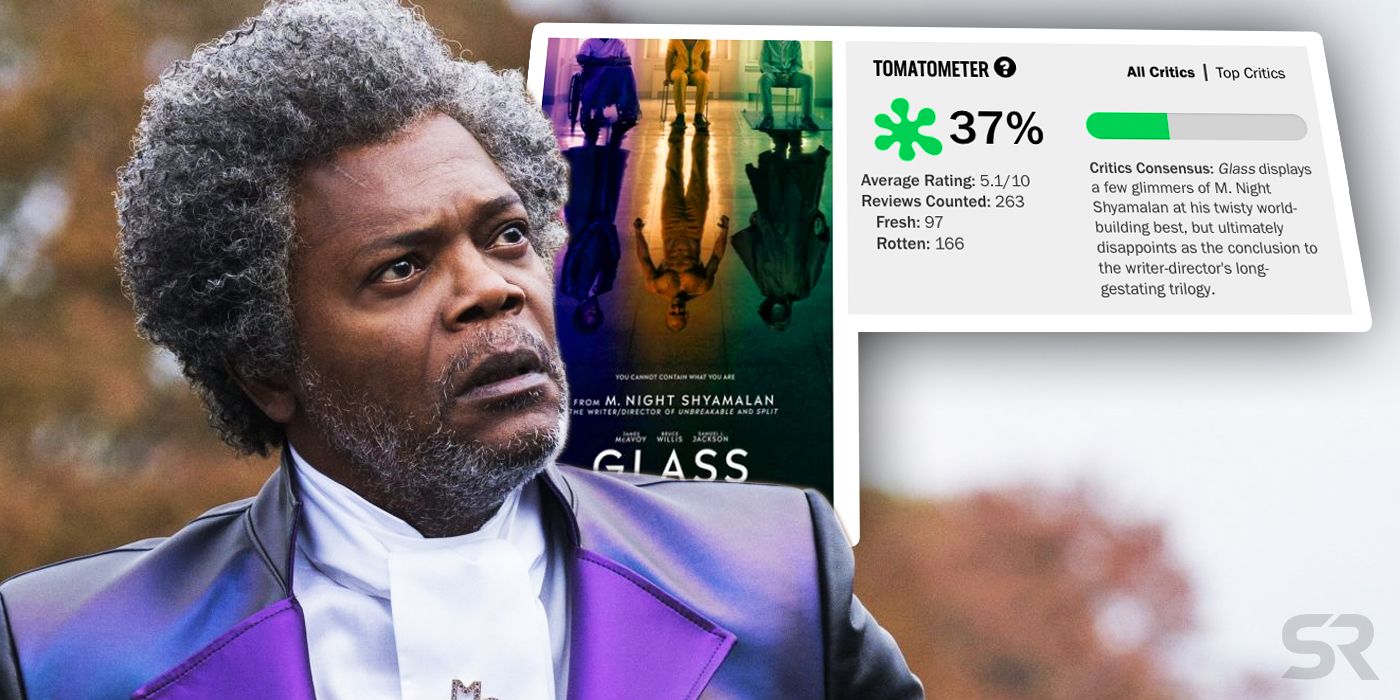 M. Night Shyamalan's Glass has received brutal reviews (it stands at 37% on Rotten Tomatoes) but in the critics' zeal to shatter the end of the Unbreakable trilogy, they are largely failing to appreciate its virtues. A sequel to 2000's Unbreakable and 2017's Split, Glass is the reunion of Bruce Willis' hero David Dunn, Samuel L. Jackson's villain Mr. Glass, and James McAvoy's Kevin Wendell Crumb in a comic book-inspired movie 19 years in the making.

With Glass, Shyamalan had ambitious plans. Concluding the story he began in Unbreakable, the director had to find a compelling way to bring his characters and their supporting cast (which includes Spencer Treat Clark as Joseph Dunn, Charlayne Woodard as Mrs. Price, and Anya Taylor-Joy as Casey Cooke) together into a new story that paid off old thematic threads, and he wanted to weave in no less than three of his trademark Big Twists: that the Eastrail 177 train crash Mr. Glass caused was the catalyst for Kevin becoming the Horde; a secret society unofficially called the Clover has been eliminating superhumans for centuries; and Mr. Glass' master plan was to expose superheroes to the world to spark a bigger universe.

The results have divided fans and invited scorn from critics but some of the vitriol is unfair. Glass is certainly a problematic film but it's also a compelling one that invites debate and thoughtful consideration. Fans expecting something akin to a Marvel or DC movie may have been disappointed while critics may have been left baffled by Shyamalan's vision, but it's worth looking through Glass to see that it's a much more interesting film than the bad reviews indicate.

Glass Pays Off The Big Ideas In Both Unbreakable And Split

Unbreakable was a superhero origin story, but it's only truly completed by Glass, in a macro sense. In Unbreakable, David Dunn finally accepts that he's been special all his life and begins to explore his potential, but this was only part of Elijah Price's plan; David rewarded his lifelong belief that there are superhumans in the world and comic books document their real-life existence. Glass ambitiously expands the canvas and becomes the origin story of an entire superhero universe - as well as of the opposing force that means to suppress and eliminate people with special abilities.

The theme of emergence and self-actualization (both for good and evil) in Unbreakable is given a grander form in Glass. Elijah believed his whole life that superheroes were real to the point that he killed many people to prove it. In Glass, Elijah died knowing that he was right and his masterplan provided the means to show others out there that they aren't alone, giving them the hope that they will reveal themselves to the world. Elijah's dying statement, "We allow ourselves to be superheroes", is a flashpoint for those who feel special to come out of hiding but in the real world; it invites the audience to ask ourselves what's best about us and begin living up to that potential.

Glass also peers through the looking glass of Split's exploration of mental illness and tries to flip its cause and effect. In Split, Kevin Crumb's Disassociative Identity Disorder was a clever means to explain how he could manifest superhuman strength and invulnerability as the Beast. In Glass, Dr. Ellie Staple uses mental illness as a way to "prove" David, Kevin, and Elijah are delusional; she makes David and Kevin doubt what they can do is actually real, at least temporarily. While Dr. Staple is really acting as an agent of Clover, for a while, she was able to weaponize psychiatry against her three captives and the audience. These are weighty themes and while they are admittedly handled a bit awkwardly, they remain compelling and a cut above the basic good vs. evil and redundant save the world plots of many superhero movies.

With Glass, Shyamalan also seems to be turning his eye to the superhero genre. When he made Unbreakable in 2000, the Batman series had fizzled out with the campy Batman & Robin and the genre was just on the cusp of the explosion of blockbuster superhero movies we're enjoying today. Since then, Shyamalan has turned down offers to direct Marvel and DC films, preferring to concentrate on his own creations. Now, though, with Split a secret villain origin story, he had the opportunity to do his own take on the popular genre.

Glass is shot strangely and doesn't look like either Unbreakable or Split; Shyamalan and his cinematographer Mike Giolakis freely use handheld cameras, Dutch angles (deliberately referencing the 1966 Batman TV show), and a primary color palette for each character to communicate mood and feeling. While it can appear jarring or even trite, there's a method to this style, and it seems to be a commentary on superhero shared universes in general. Like Batman's foreboding world of Gotham, Unbreakable and Split had haunting visuals expressly designed for them; in Glass, David and Kevin are robbed of their films' dread-inducing ambiance and forced to exist in a more neutral world. Therefore, the Beast is exposed in the light of day and seems less frightening while David looks like a tired, older man and not a robust hero.

With Glass, Shyamalan puts the characters of Unbreakable and Split together not unlike how the MCU and DCEU assembled the Avengers and the Justice League; but by removing the shadows and moody atmosphere that was so vital to those earlier efforts, Shyamalan seems to be saying that shared superhero universes can dilute the effectiveness of the individual superheroes themselves. This is what happens by the end as David, Elijah, and Kevin are all overwhelmed and killed by the Clover. In a way, Glass exposes the limitations of superhero team-up movies and shared universes in general - while it's exciting to see characters come together, certain vital elements are lost in order to make characters who were designed to inhabit their own unique universes work alongside each other. His weird execution notwithstanding, Shyamalan should be appreciated for boldly trying to make a statement about the genre with Glass instead of merely adhering to its accepted tropes.

Page 2 of 2: Why Glass' Reviews Are Unfair

Glass Had To Deal With Two Decades of Hype

It's safe to say Glass was the most excited both fans and critics were for an M. Night Shyamalan film since 2002's Signs. Split was already a well-received horror film that carried no great expectations until the twist at the end that showed Bruce Willis as David Dunn and mentioned Mr. Glass. After that, Glass became more than just another Shyamalan film. It was now seen as the apex of the "Shyamalannaisance", a return to the director's blockbuster glory days of The Sixth Sense and Signs after over a decade of critical and commercial flops. People were rooting for Shyamalan to blow everyone away with Glass, which is perhaps why the divisive film is receiving a harsh backlash.

Once it became clear that Glass was fully resolving the story of Unbreakable, hype elevated to "the movie you've waited 19 years for!" This is a big burden to overcome, especially for a director as idiosyncratic as Shyamalan who doesn't deliver traditional blockbusters (even his most popular films, The Sixth Sense, Unbreakable, and Signs were unconventional). The superhero genre has changed as well thanks to Marvel Studios' perfecting a formula that routinely pleases a global audience and cranks out billion-dollar hits. Glass, which Shyamalan self-financed for a fraction of even the smallest-scale Marvel film's budget, was expected to compete against those types of movies and even deliver comparable box office grosses. Shyamalan is an auteur who stuck to his personal vision and delivered a superhero movie uniquely his own, but that invites a critical divide.

Related: Do You Need To See Split And Unbreakable To Understand Glass?

Some of Glass' Decisions Are Too Controversial For Some

Admittedly, some of Shyamalan's creative decisions in Glass are surprising, baffling, and even very disappointing. Shockingly, all three of Glass' main characters die and not heroically; instead, they are horrifically murdered in what Shyamalan intended to be an operatic fashion. The director spends the entire movie telegraphing an epic climactic showdown (even unnecessarily explaining what a superhero "showdown" is) at Philadelphia's Osaka Tower only to have the climax occur in the Raven Hill Hospital parking lot.

Possibly the worst offense was the demise of David Dunn's Overseer; compared to his colorful villains, Shaymalan seemed the least interested in returning to David's story and gave the hero a perfunctory role. Poor David is relegated to being a stoic figure whose only real function is to fight the Beast. Being drowned in a puddle is a truly ignoble ending for the Unbreakable hero who started it all.

Shyamalan's big twist that there's a villainous unnamed organization of wealthy and powerful people who have black cloverleaf tattoos on their wrists was also a gigantic idea that was completely underserved, which is especially frustrating. Dr. Staple's explanation that Clover has existed for 10,000 years and have suppressed or eliminated other superhuman beings was extremely rushed, opening up more questions than Glass is willing to answer (especially if the director doesn't make any sequels). In effect, as the final film in the trilogy, Glass unsatisfyingly wraps up the stories of David Dunn, Mr. Glass, and Kevin Crumb while simultaneously launching a larger, tantalizing universe we may never see more of since these films are a "Limited Edition". All of this comes across as shocking, especially compared to the genre as it currently exists.

As confusing as Glass can be, it also is a lightning rod for debate and is fun to dissect in way that other superhero movies aren't, whether it's analyzing Shaymalan's controversial themes as a writer (such as his remedial and outdated ideas about comic books) or the peculiar choices he made as a director. While Glass is a messy film riddled with plot holes and unanswered questions, it still has many aspects worth celebrating, starting with the tremendous performances by the cast (especially McAvoy), its sheer weirdness, its willingness to take bold chances (and how it's unafraid to fall on its face), and that it is drastically unlike other superhero movies. Glass is an auteur's comic book film and while it may not be to everyone's tastes, it adds something unique and refreshing to the genre.

In a marketplace where Marvel rules the roost and other studios are unsuccessfully trying to copy their formula, Glass stands apart as a superhero universe only M. Night Shyamalan could have dreamed up. The director's questionable execution notwithstanding, Glass is clearly not the product of a studio think tank or the result of many cooks in the kitchen; for better or worse, this is Shyamalan's singular vision realized. Glass concludes the story of Unbreakable the director has envisioned for two decades and, in the end, M. Night Shyamalan should be lauded for telling it his way as only he can. This may not be what critics expected or wanted, but that doesn't make it any less bizarrely impressive.

Next: Glass Needs A Sequel: What's Next For The Unbreakable Universe?