« Skyrim: Every Dragon Ranked From Weakest To Most Powerful
Rock Says ‘Snowflake’ Quote is Fake; Denies Interview Ever Happened »

Glass Theory: James McAvoy’s Split Character Was In Unbreakable All Along 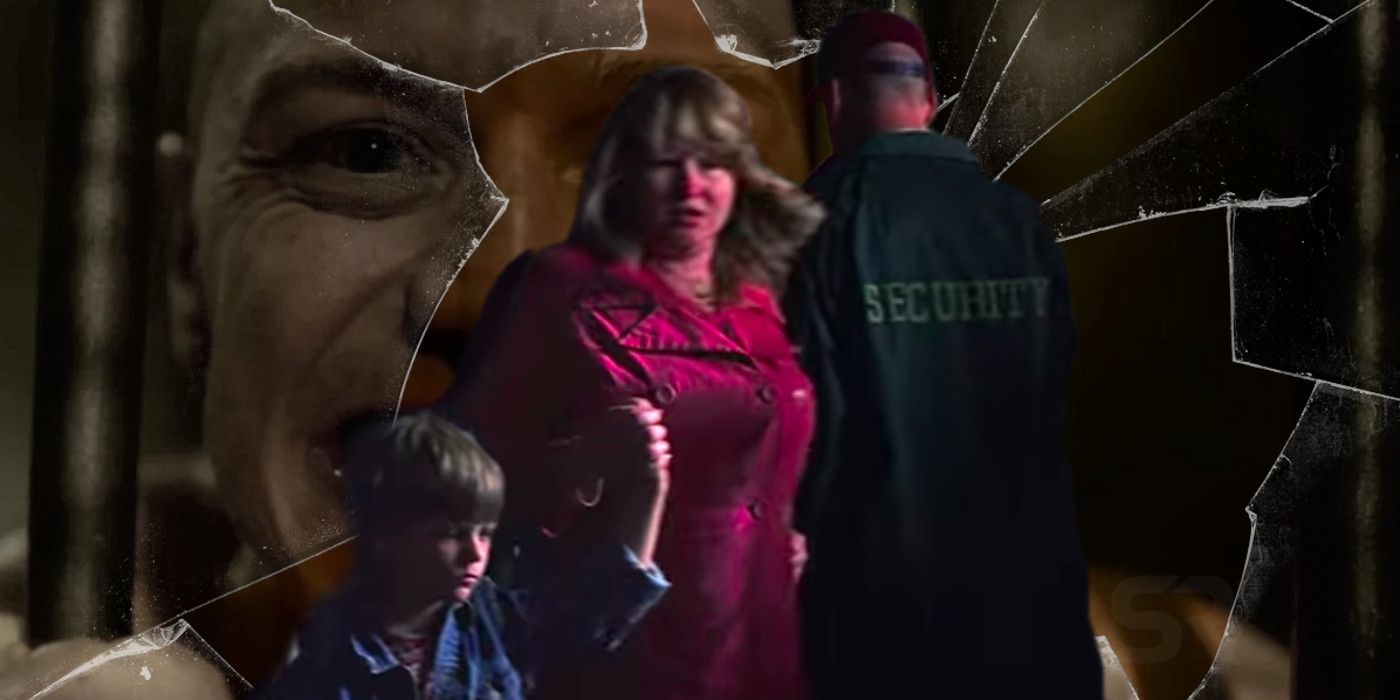 Glass unites director M. Night Shyamalan's previous films Unbreakable and Split into a shared comic book universe, but Split's villain, Kevin Crumb (James McAvoy), may have had a secret cameo in Unbreakable all along.

Released in 2000, Unbreakable was a film ahead of its time. Marketed as a spooky new thriller from the filmmaker behind the blockbuster The Sixth Sense; audiences were stunned when it gradually revealed itself to be the origin story of a superhero named David Dunn (Bruce Willis), with Samuel L. Jackson portraying Dunn's nemesis Elijah Price. 17 years later came Split, a horror film by Shyamalan which starred James McAvoy as Kevin Wendell Crumb, a man suffering from Dissociative Personality Disorder who manifested 24 distinct personalities and kidnapped three teenage girls. Audiences were again shocked when the final scene dropped a bombshell: Split was set in the same universe as Unbreakable and set up a third film, Glass, which will bring those characters together in what's unofficially referred to as the Eastrail 177 Trilogy.

Related: 2019 Will Have The Most Superhero Movies Ever

When he was planning Unbreakable, Shyamalan originally intended for Kevin Crumb to appear and for the story of Split to be part of the 2000 film. Shyamalan conceived Unbreakable to have the full three-act structure of a superhero story but the director found himself most fascinated by the first act, the origin, and made that encompass the entire film. Shyamalan recently revealed that he cut Kevin Crumb out of Unbreakable; David Dunn was meant to investigate Crumb's kidnapping of teenage girls and fight the villain. However, Shyamalan felt David taking on Crumb would distract from the intimate story of Dunn's self-realization about his powers and his relationship with his wife and son. Therefore, he dropped Kevin Crumb from the movie - until he became the focus of Split in 2017.

The version of Crumb  Shaymalan excised from Unbreakable was a grown adult, but our theory is that the forward-thinking director instead reconceived Crumb's origin and dropped an Easter egg of Kevin in Unbreakable that set the stage for Split and now Glass almost two decades later:

This Page: The Young Kevin Crumb Cameos In Unbreakable

Page 2: What Does Kevin In Unbreakable Mean For Glass?

A Young Kevin Crumb Is In Unbreakable

The young boy who could be Kevin Crumb briefly appears midway through Unbreakable. In the scene when David is testing his ability to sense the evil in others, he stands in the middle of a crowded hallway in the stadium where he works as a security guard. As various people walk by David, a woman in red holding the hand of a young boy bumps him on the shoulder and he hears not just one voice but the echo of multiple voices. It's a quick moment that David doesn't act upon but this might well be the child who 15 years later would manifest 24 different personalities, including the malevolent Beast.

We know from Split and the files kept by Kevin's psychiatrist Dr. Karen Fletcher (Betty Buckley) that Kevin lost his father at an early age and he was raised by an abusive mother. The years of abuse is what spawned Kevin's alternate personalities. The quick moment in Unbreakable where a mother and son bump into David Dunn fits with this being young Kevin - David doesn't just hear one child's voice but several voices calling out in distress. This could well be the earliest encounter David had with the villain the media dubbed "The Horde," which also ties into how David behaves as if something about the news report he watches in the diner at the conclusion of Split seemed familiar to him.

Furthermore, in Split, Kevin visits a train and brings flowers before he finally transforms into the Beast to kill the kidnapped girls. The train itself has immense significance in Shyamalan's story: a train accident caused by Elijah Price is how he found David Dunn, but that very same Eastrail 177 train accident could have also led to the death of Kevin's father, who could have been among the 131 passengers who died in that fateful train crash.

Was Kevin Crumb's father one of the passengers lost when Eastrail 177 crashed? After all, Kevin's father never came home one pivotal night, which left the boy alone with his mother. This means that train accident ended over a hundred lives but also led to the creation of Kevin Crumb's multiple personalities, including the Beast. If Kevin Crumb's father was on Eastrail 177, Kevin's origin becomes inextricably tied to David Dunn's emergence as a hero and Elijah Price's villainous turn as Mr. Glass.

Page 2: What Does Kevin In Unbreakable Mean For Glass?

Was This M. Night Shaymalan's Plan All Along?

By his own admittance, M. Night Shyamalan originally planned for David Dunn to fight Kevin Crumb in Unbreakable, but it was the adult version of the Beast. Had Unbreakable encompassed the full arc of a superhero movie and not just the origin story, the third act would have essentially been what Split became: Kevin would have kidnapped three teenage girls like he does to Casey Cooke (Anya Taylor-Joy) and her friends, David would have learned about it, and set off to save the girls and fight Kevin (this would have probably replaced Unbreakable's climactic fight between David and the Man in the Orange Jumpsuit).

Night scaled down Unbreakable's scope to protect the integrity of the story he really wanted to tell, which was the intimate study of a man who learns he's super and how it impacts his relationship with his family. However, the director clearly held onto Kevin Crumb and saw the potential for the future. He brilliantly expanded Unbreakable's universe with Split while maintaining the secret that Split was a sequel to the earlier film but set 17 years later. The new magic trick Shyamalan looks to have pulled by telling the story of an adult Kevin almost two decades later is how Kevin would now have to be a child when Unbreakable happened, but Night seemingly had the foresight to insert Kevin as a child in Unbreakable anyway, setting the stage for the sequel (which back in 2000 he wasn't sure would even get made).

Related: Why Is David Dunn Locked Up With Mr. Glass?

With Split, Night told the third act of his original Unbreakable story and tied it all together with his trademark "twist" ending which opened the door to the third film, Glass. But in hindsight, the clues were there all along, starting with Split's Philadelphia setting (which is where many of Shyamalan's films are set) and Kevin visiting the train with flowers, which seems to be a callback to Unbreakable's train crash. It appears the Eastrail 177 train crash narratively ties everything together, which puts the focus back on Mr. Glass in the third film.

There's a moment in Glass' trailer that shows David Dunn passing Kevin Crumb on the street and he senses the Beast's malevolence - this echoes the scene in Unbreakable where a similar thing happens when Dunn collides with the people who could be the young Kevin and his mother. It is even shot by Shyamalan in a similar way, which ties the two moments together and establishes this has happened before in the past. After all, once David accepts his destiny in Unbreakable, Mr. Glass' twist was that the superhero needs a super-villain. Elijah Price is the mastermind antagonist but he lamentably can't physically fight David Dunn - the Beast can.

The key then becomes Mr. Glass causing the Eastrail 177 train accident. That tragedy didn't create David Dunn because David was born special but denied his true abilities for most of his life, but it revealed him to Elijah and led to David accepting who and what he is. But if our theory holds and Kevin Crumb's father died on Eastrail 177, then Mr. Glass also inadvertently created the Horde. Elijah Price becomes the reason Kevin grew up to be a super-villain, and thus Mr. Glass spawned the piece of the puzzle missing from David's superhero story: the villain he can physically fight who "requires David's full potential".

If Mr. Glass' train crash revealed David but also created the Beast, then M. Night Shyamalan ingeniously plotted his superhero shared universe over two decades and he intriguingly set the stage for "the bad guys teaming up" against David Dunn in Glass.

Next: Glass Is One Of Screen Rant's 50 Most Anticipated Movies of 2019

This entry was posted by Screen Rant on January 12, 2019 at 9:01 am, and is filed under TV News. Follow any responses to this post through RSS 2.0. You can skip to the end and leave a response. Pinging is currently not allowed.