IO Ending Explained: What Happens In The Netflix Movie (& What It Means) 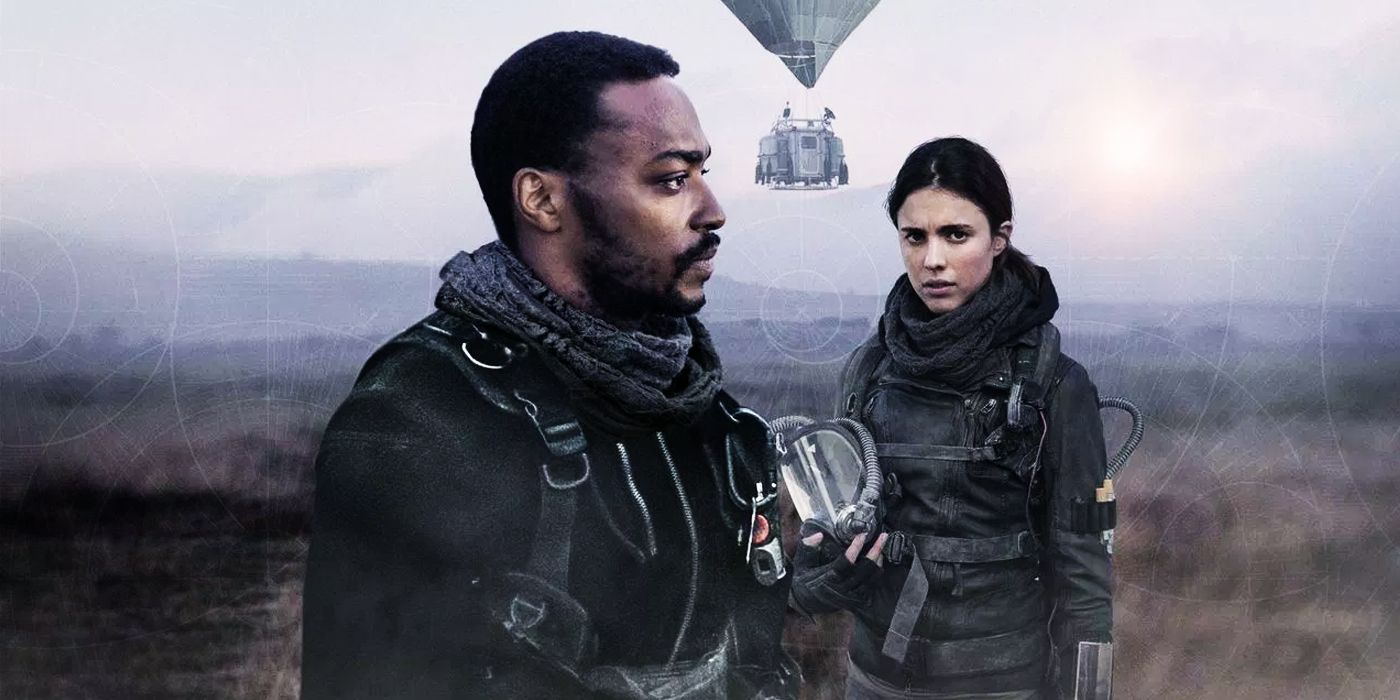 WARNING: Spoilers for IO ahead.

What happens at the end of IO, and what does it all mean? Netflix's newest film is a markedly different project from recent releases like Mowgli or Roma. While those are massive productions from titans of the movie industry, IO is a much smaller work, a sci-fi drama from budding French director Jonathan Halpert in only his second feature film.

Despite including some legitimate Hollywood pedigree in its three-piece cast, among them MCU alum Anthony Mackie, IO is far from a lavish production. Taking place almost entirely within one location, the environmentally-conscious movie depicts a near-future where the Earth's environment has become suddenly inhospitable, forcing the human race to leave. Believing she can still fix things, geneticist Margaret Qualley's Sam chooses to stay behind and research in a makeshift lab until the very last minute, while Mackie's Micah tries to convince her to leave with him, leading to the bittersweet finale.

Here, we're going to break down IO's ending, answer some of its more confounding questions, and figure out what all of it is trying to say.

What Actually Happens At The End Of IO?

At the end of IO, Micah and Sam make a break for the last wave of departing spacecraft for the human colony near Jupiter's moon Io. Short on helium for Micah's hot-air balloon, Sam guides them to a stockpile of helium canisters amid the derelict, toxic, and overgrown city nearby. After a short rest before departure, Sam decides to visit a local museum, where she gazes at all the art and history on display, resting at the famous painting "Leda and the Swan" by Paul Cezanne.

Looking at the piece, she's joined by Micah who beckons her to leave. Instead, she asks Micah, a former teacher with a specialty in classical history and literature, to explain the painting to her. Micah explains that the swan represents Zeus, who seduces Leda and together they bore Helen of Troy, a woman considered to be the most beautiful on Earth. The illustration is the coming together of the Gods and mortal man to create something of incomparable beauty.

Sam explains a dream she keeps having where she's not wearing a mask and she's fine, even though she lights her lighter and the flame burns purple. Inspired by the painting of Leda, she takes a leap of faith and removes her mask and air supply, learning she can breathe fine, suggesting she has an immunity the toxic air. She tells Micah to go on to the Exodus colony while she stays, the last scene being her writing to Micah, telling him about her watching the waves of an ocean just as she'd always dreamed of as she's joined by a child, an allusion to Helen of Troy. Just as Leda gave birth to god's children, Sam is suggested to have given birth to a new generation, the next stage of evolution and survival on the planet.

What Happened To Earth Before IO?

In a very direct appropriation of climate change, IO's opening monologue explains that while Earth's atmosphere was deteriorating, eventually there was an undefined planet-wide shift and suddenly things went from gradually getting worse to being uninhabitable. The nations of the world came together and decided to launch the Exodus programme, where a colony was built near one of Jupiter's moons and ships would gradually take as much of the population as possible there in waves.

Dr. Henry Walden, Sam's father, was of the belief that life could be salvaged, and had been trying to convince people to stay while he researched ways of mutating humans and animals to tolerate the new atmosphere. Some of the stragglers included Micah, who watched his wife and those around him starve to death or worse, waiting for Walden's work to bear any kind of tangible results.

IO doesn't go into too much detail beyond this on the circumstances of its apocalypse, but it is stated that fresh vegetables are scant and wildlife on land and in the oceans are completely gone as far as anyone can tell. The camp Dr. Walden had made for he and Sam exists in one of the few remaining pockets of air in the world, but is still susceptible to massive storms that are radioactive with whatever happened to the atmosphere, and the air-pockets are dwindling, hence Micah's dedication to getting he and Sam on one of the last shuttles.

Page 2 of 2: What Micah & Sam's Story In IO Says About Climate Change

Micah's Arc In IO Is About The Faults Of The Past

Literally arriving from the clouds at the start of IO, Micah emerges in his hot-air balloon all of a sudden, landing right beside Sam's home. Micah gives no real details on where he came from, creating an air of forced nomad-ism that was probably how many of the remaining humans kept themselves alive. He had come to confront Dr. Walden because he blamed Henry for having to watch his family die while waiting for something good to happen. He describes the horrifying choice of feeding his wife so she'll live for a few more days, or having a little more food so he can survive for a little longer.

Micah embodies the fault in Dr. Walden's hubris. Asking people to stay while a gradual end-of-days unfolds around them is an incredible thing to do in the name of science, and when Henry's work failed, it's no wonder there's a resentment. Finding Dr. Walden dead, Micah understands that now that it's just he and Sam, all that matters is them both finding a way off the planet. Resentment and regret should die with the rest of Earth at this point.

Sam's Arc In IO Is About Belief & Overcoming Limitations

In IO, Sam had been continuing her deceased father's work on genetic mutation. First, she served as his dedicated assistant for some time before he died, leaving her to continue the venture in his stead. She maintained everything from his radio broadcast recordings looking for other people to growing fresh vegetables in their greenhouse.

The process was based around insects and bees. At the start of IO, she finds some amphibious life reproducing in a puddle, and takes it back to the compound for further analysis. Finding any new life is rare, and her hope is to transfer whatever is keeping these things alive to a beehive she keeps for experimentation. It doesn't work, but she remains undeterred.

In the meantime, she is exchanging messages with an unseen Elon, voiced by Tom Payne. The two had a romance before he left on Exodus and had made a plan to rendezvous on the space colony, but her reticence to leave became outright denial when Elon informed her he would be going on a one-way expedition to begin making a nearby hospitable planet ready to restart human civilization.

Sam is a dedicated environmentalist, which is somewhat surprising given that she has next-to-no memory of the time when Earth wasn't hostile to human life. In her discussions with Micah, he tells her about nobody being ready for when this thing happened and living through the first waves all the way to now. She only knows this existence, living off the dusty scraps of a world that once was. A reality newer generations may have to face if we don't heed the Dr. Waldens of our world now, while we still can.

Netflix IO presents a world where climate change and the seeming end of life on Earth isn't a total end, one where governments snap into action and eventually our planet becomes hospitable again. For all it is a post-society movie, it has a highly optimistic bent. What all that does, though, is less offer an olive branch from the future to the present, and more hammer home that it's not too late - as long as we take action now.

Next: Netflix Original Movies To Be Excited About In 2019