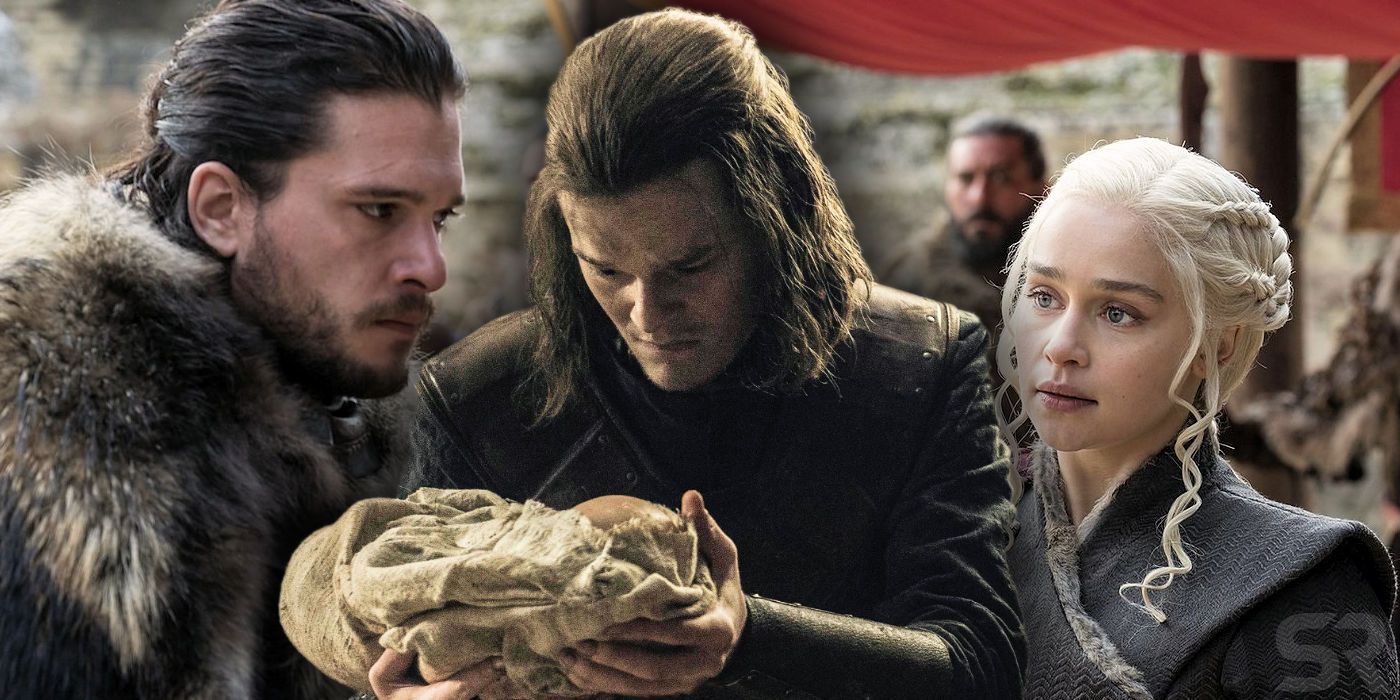 The problem with promoting Game of Thrones season 8 is that pretty much everything is bound to be a spoiler, and that includes potentially ruining the first time Jon Snow learns of his true identity. Audiences have already seen Daenerys Targaryen arrive in Winterfell in a recent HBO teaser, which itself is a bit of a spoiler, seeing as it reveals a break in Stark tradition.

And while Jon Snow's Targaryen lineage will undoubtedly be a significant plot point in Game of Thrones season 8, the "Crypts of Winterfell" teaser trailer suggests that the Stark family may actually be at the forefront of the show's final season. That begs the question, how much of the Jon/Targaryen story will Game of Thrones show?

The truth of Jon's heritage was officially revealed during the Game of Thrones season 7 finale, and while many fans had correctly guessed years ago that Jon was the son of Rhaegar Targaryen and Lyanna Stark, having it finally confirmed remains a pretty big deal. His parentage wasn't just confirmed, though, because it's also revealed that Rhaegar had his marriage to his first wife, Elia Martell, annulled and he secretly wed Lyanna before Jon was born. This was later corroborated by Bran, the new Three-Eyed Raven, and it's this particular detail which complicates things; Jon is technically the true Targaryen heir to the Iron Throne.

Jon being the true Targaryen heir is sure to shift the power dynamics currently at play in Westeros. Most obviously, Jon's true heritage gives him a stronger claim to the Iron Throne than Daenerys. Daenerys isn't the Mad King's only heir. As a true-born son of her older brother, Jon is above her in the line of succession. This will almost certainly complicate not just their growing personal relationship, but the political alliance they struck last season when Jon bent the knee to Daenerys.

Additionally, if this news spreads among the nobility of Westeros, Jon's current standing as King in the North is sure to also be called in to question. Will the northern lords continue to honor Jon's position as king - a title they only bestowed on him because he was Ned Stark's last surviving son - once they learn he's actually Rhaegar's son? Probably not, thereby creating chaos in the North. As for Cersei, she might actually have an advantage in all this - especially if this news leads to Jon and Dany fighting over the throne that she currently occupies. Perhaps Cersei will seek to ally herself with Jon, aiding him in keeping the North if he accepts her as Queen? But does any of this really matter?

All his life, Jon has wanted to know more about his mother, and Game of Thrones season 8 is likely to give him those answers as well as a whole lot more; how he reacts will dictate his path forward. But Jon never questioned that Ned was his father because he was never given a reason to do so. Even under the guise of being his illegitimate son, Ned instilled the same Stark values in Jon as the rest of his children. The truth of Jon's parentage doesn't really change any of that, and as suggested by that very Stark-centric season 8 teaser, remaining a Stark will be more important to Jon than his Targaryen lineage.

Each of the quotes heard in the Game of Thrones teaser are about Jon: Lyanna tells Ned to "protect him"; Catelyn regrets being unable to "love a motherless child"; Ned reasserts that Jon is a Stark, saying "you have my blood." These statements all precede a scene of the three remaining Starks - Jon, Sansa, and Arya - standing united against the coming winter. The symbolism in this teaser is hard to ignore, suggesting that once the truth of Jon's parentage gets out, it won't change how Jon feels about himself. Sansa and Arya, too, won't abandon Jon once the truth is revealed, instead standing firm and protecting him - just as his mother wished and their mother failed to do. In the end, Jon will honor the legacy left to him by the man who really was his father: Ned Stark.

Next: Is Game Of Thrones Teasing Jon Snow's Death In Season 8?