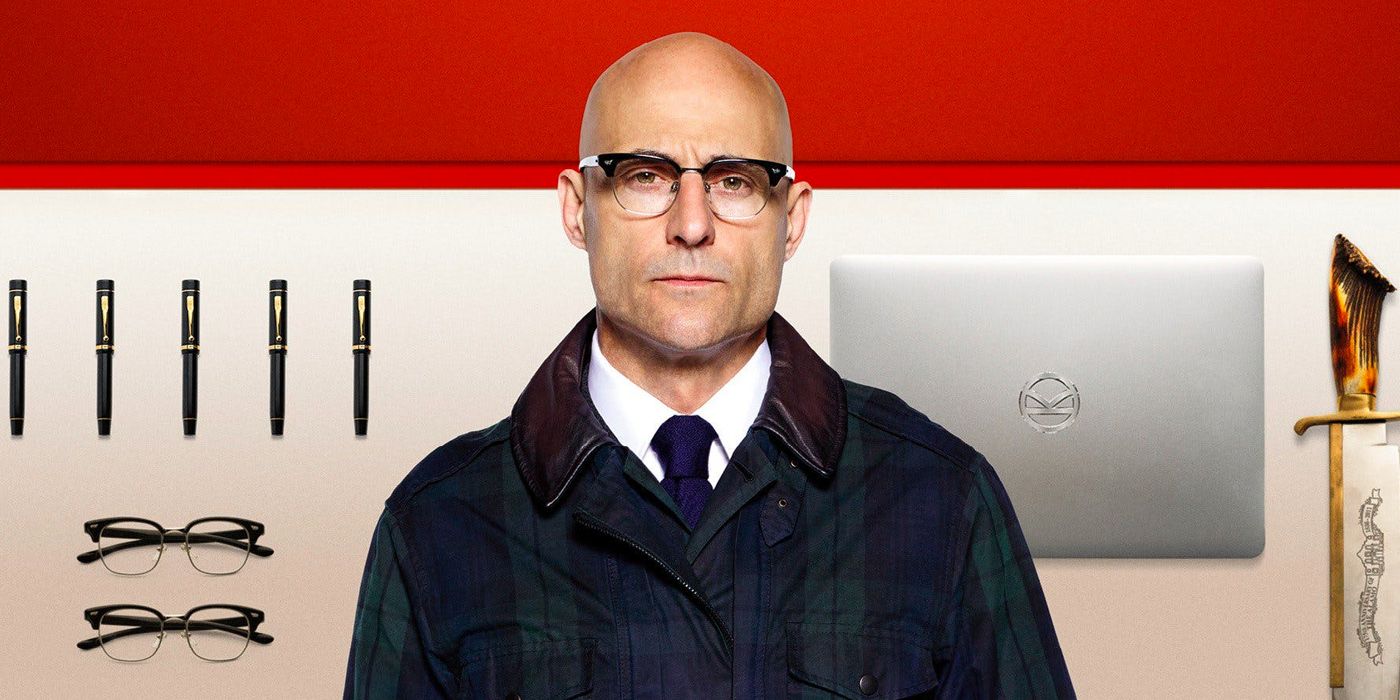 Kingsman creator Mark Millar has posted photos showing a happier alternate fate for Mark Strong’s Merlin in Kingsman: The Golden Circle. The original Kingsman was adapted from Millar’s graphic novel of the same name and found a teenager named Eggsy (Taron Egerton) training to become a member of an elite spy group.

While Kingsman: The Golden Circle was another success, it received a more mixed critical response. Whereas the first movie felt like a throwback to the colorful spy movies of the 1970s, Kingsman: The Golden Circle's long runtime and childish sense of humor were commonly cited as two major problems. It also brought Colin Firth’s Harry Hart back to life after his fairly definitive death in the original. While Hart was a big hit with audiences who wanted to see the character return, his resurrection via some magical healing gel slightly cheapened his emotional demise. That said, he wasn't the only major character to die in the franchise.

Kingman: The Golden Circle saw the death of another fan favorite character in Mark Strong’s Merlin, who is killed in a mine explosion. This scene is a shocking and heartbreaking moment for the characters and audience alike, but the original cut revealed Merlin actually survived this scene. He even later attended Eggsy’s wedding at the end of the film. Now, Millar has taken to Twitter to show some rare photos of a living Merlin during the final scene.

Merlin’s heroic death is considered one of the film’s highlights, but the first cut of Kingsman: The Golden Circle reveals the explosion only cost him his legs. He was supposed to crawl into the diner following the final fight scene, revealing his survival to Eggsy, and he would then be seen with prosthetic legs at the wedding. Test audiences were said to feel cheated that Merlin's "death" was used as a cheap gag, so his demise was made permanent in the final cut.

While Kingsman: The Golden Circle didn’t receive the same critical buzz as the first film, the franchise’s future is looking strong. A prequel called Kingsman: The Great Game will star Ralph Fiennes, and will film before Egerton and Firth return for Kingsman 3. An 8-part Kingsman TV show, as well as a spinoff focused on sister organization The Statesman, are also in development, and Egerton has recently stated he’d like to take a 10-15 year break from the series following the third movie before returning to mentor a new agent in a future sequel.