Marvel Is Releasing Captain Marvel Too Close To Avengers: Endgame 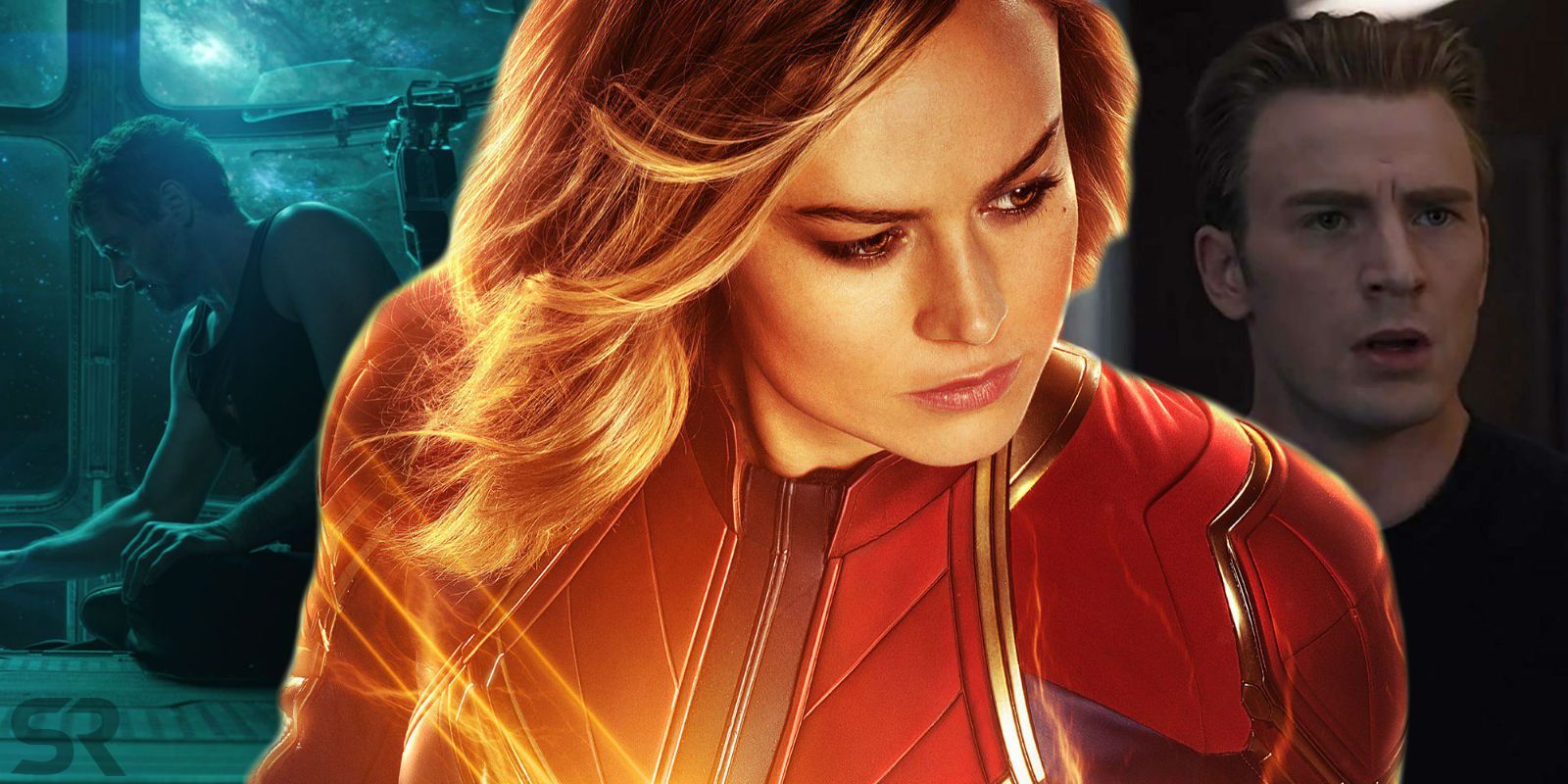 Marvel Studios is releasing Captain Marvel less than two months before Avengers: Endgame, and that is way too close. The former is the 21st entry in the Marvel Cinematic Universe and stars Brie Larson as Carol Danvers, who will become the first female character to get a solo movie in this franchise. It takes place in 1995 and tell Carol's non-chronological origin story, which will see the MCU's newest hero take part in the intergalactic Kree-Skrull war, as well as meet a much younger Nick Fury (Samuel L. Jackson).

There's already plenty of anticipation for Carol's first appearance after Fury's pager in Avengers: Infinity War's post-credits scene. She will be joining the larger MCU storyline after her debut when she returns in Avengers: Endgame. Captain Marvel was not shown in the first Avengers: Endgame trailer, as it instead kept the focus on the original six Avengers. This was to be expected as the fourth Avengers film is set to be the culmination of the first MCU saga. The story is now 11years in the making and excitement is already through the roof for what directors Joe and Anthony Russo and writers Christopher Markus and Stephen McFeely have created next.

Related: It's Too Late To Rewatch The Entire MCU Weekly Before Avengers: Endgame

This overwhelming interest for Avengers: Endgame is great for the epic conclusion, but it may not be for Captain Marvel. Marvel is going to release the latter only a few weeks before Avengers 4, which could prove to be a misstep should it stop Captain Marvel short of reaching its full potential.

In 2018, Marvel Studios finally released Black Panther into theaters, after T'Challa (Chadwick Boseman) was first introduced in Captain America: Civil War. He was properly set up to be the focus of the MCU's first film led by a person of color and Black Panther, directed by Ryan Coogler (the MCU's first black director), became the best reviewed blockbuster of 2018, in addition to grossing over $1.3 billion worldwide. The movie received the earliest release date in the calendar year for any MCU movie and would come out just a few months before Avengers: Infinity War, where Black Panther and the rest of Wakanda would play an important role.

Captain Marvel is in a similar boat as Black Panther. Carol Danvers is a brand new, highly-anticipated character who is finally getting a movie of her own. As exciting as this is, she is also going to play a big role in Avengers: Endgame shortly after. Just like how Black Panther stood on its own and set up the technologically-advanced nation as a fortress for Infinity War, Marvel will also be introducing elements in Captain Marvel that could be key to Avengers 4. The shape-shifting alien race known as Skrulls could play a factor here, or be saved for a Secret Invasion adaptation later on. It was also recently revealed by Jackson that Captain Marvel may have the ability to time travel, and this could be useful if, as many believe, the Avengers are going to travel across time in order to try and defeat Thanos in Avengers: Endgame.

Larson's solo movie could also have a major impact on the reception to Avengers: Endgame. Marvel saw Infinity War's box office total rise to $2 billion just after Black Panther served as an introduction to the MCU for some audiences. Captain Marvel may also be able to have a similar effect on Avengers: Endgame, as some viewers could be brought into this franchise through the female-led film. Once they're attached to Carol, new audiences could be more likely to return for Avengers: Endgame, especially if Captain Marvel ends with a tease of her role in the team up.

Captain Marvel Has Been Delayed Twice (For Other Movies)

Marvel Studios is currently set to have Captain Marvel be their last theatrical release before the fourth Avengers film, but that was not always going to be the plan. When they announced the full Phase 3 slate back in 2014, it was intended for the Carol Danvers origin film to come out much sooner. The first release date set for Captain Marvel was July 6, 2018, which would've made it the first MCU movie to come out after Avengers: Infinity War - but then Marvel started to make changes.

The first delay Captain Marvel suffered was thanks to the surprising deal struck by Sony and Marvel that allowed Spider-Man to exist in the MCU. Tom Holland's MCU debut was set for Captain America: Civil War and his solo movie, Spider-Man: Homecoming, received prime placement in July 2017. This forced Captain Marvel to be delayed to November 2018. Then, just a few months later, Marvel announced that Ant-Man and the Wasp was coming in Phase 3 as well, and that forced another reshuffling. The Ant-Man sequel received a July 2018 release date, which in turn moved Black Panther up, but delayed Captain Marvel once more to the spot it now has in March 2019.

Page 2 of 2: Captain Marvel Is Releasing Too Close To Avengers: Endgame

Captain Marvel Is Releasing Too Close To Avengers: Endgame

With this final release date, Captain Marvel is set to come out only seven weeks before Avengers: Endgame. This will be the shortest gap ever between two MCU releases. Many may look at Marvel Studios' prolonged success as evidence that their connected franchise is too big to fail at this point, but they've never attempted something like this before.

The best comparison for Captain Marvel continues to be Black Panther, which hit theaters 10 weeks before Infinity War. Three weeks may not seem like it could make that big of a difference for a movie's box office returns, but it does, even for a movie like Black Panther that stayed in theaters for 25 weeks. The film had already made the majority of its money domestically by the time Infinity War was released, but now Captain Marvel will have a shorter window to become a box office success. Recent reports of a possible $160 million opening weekend indicate the movie will do just fine financially, but it will still lose its spotlight quicker thanks to Avengers: Endgame. And the thing is, Marvel knows this; that's why they've put Captain Marvel tickets up for sale a full two months in advance of its release, something they've never done before. In fact, only Lucasfilm opens up tickets sales that early for Star Wars movies.

Related: How Captain Marvel Can Be Introduced In Avengers: Endgame

That said, there is the outside shot that Avengers: Endgame's release could reignite Captain Marvel's box office, even for just a moment. If the solo movie is very connected to the ensemble film, then fans could revisit the movie again to pick up additional details about both movies. Even if this does happen, it would still come at a time in Captain Marvel's box office run where it could still be having success of its own if Endgame wasn't dividing the attention. A possible revitalization could've came when Captain Marvel is near the end of its run instead.

Captain Marvel's closeness to Avengers: Endgame is a direct result of the larger Disney and Marvel machines. Marvel Studios has been releasing three movies a year for the last two years. 2017 brought Guardians of the Galaxy Vol. 2, Spider-Man: Homecoming, and Thor: Ragnarok, while 2018 delivered Black Panther, Avengers: Infinity War, and Ant-Man and the Wasp. For 2019, Captain Marvel is the first MCU release and will be followed by Avengers: Endgame and Spider-Man: Far From Home. This release strategy has not been an issue for the MCU so far, but Carol Danvers' solo movie could be the first that shows how this may not be the best path for Marvel Studios. Just look at Aquaman's success as being the only live-action DC film in theaters after over a year. This type of patience could be a lesson for Marvel to learn.

The crowded release date calendar doesn't just pertain to Marvel Studios' releases though, because they also have to fit in to Disney's larger plans. The Mouse House releases some of the biggest films of the year on an annual basis between their live-action remakes, new Star Wars films, the latest Pixar story, and more. The corporate synergy will only become more difficult to maintain in the near future once Disney completes their acquisition of 20th Century Fox. This will bring a plethora of new titles under Disney's umbrella, such as James Cameron's four-planned Avatar sequels. Marvel Studios has several films of their own that need proper spacing between each other and all other Disney releases. When Marvel also begins handling a reboot of X-Men and Fantastic Four, it could continue to become a bigger problem for the wildly successful studio. To Marvel's credit, they are only releasing two films in 2020 (so far), but it is expected they'll jump back up to three films a year (if not more) after.

We'll know soon enough whether or not Captain Marvel's box office totals will be significantly impacted by its proximity to Avengers: Endgame. But, as of right now, it looks more likely that the film would benefit from being the only MCU film in theaters for a longer amount of time.

More: How the MCU Will Look Completely Different After 2019