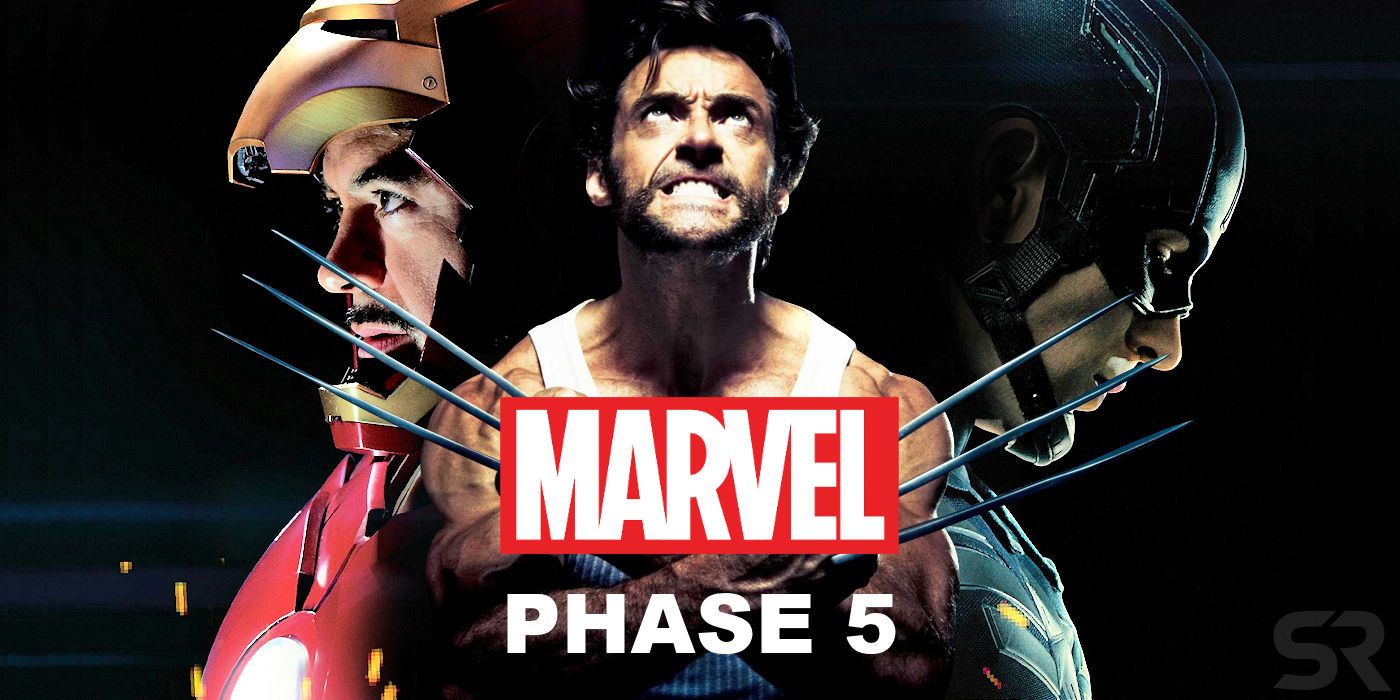 Marvel Studios shouldn't use Wolverine in the Marvel Cinematic Universe for years to come - at least until the MCU's Phase 5. Disney's 20th Century Fox acquisition looks like a sure thing right now; the deal is only awaiting approval from a small number of international regulators, after all. As a result, Marvel visionary Kevin Feige has already confirmed that he expects to regain the film rights to the X-Men and Fantastic Four franchises by summer 2019.

But how will Marvel choose to incorporate these new franchises into their shared cinematic universe, without doing damage to the already-established continuity? Attention has been focused on major characters like Wolverine, Professor X, and Magneto, but Feige has recently pointed out that there are a lot more characters than that. Fox's library has several non-marquee mutant superheroes that Marvel Studios would like to adapt. It's an important point, and one that hasn't been really considered by the majority of fans; Marvel could quite easily choose to focus on second- or third-tier characters, a pattern they've already been following when building the MCU, with films like Guardians of the Galaxy, Ant-Man, and the upcoming Eternals.

Related: How To Introduce Mutants To The MCU (Without Breaking The Continuity)

Naturally, there'll be intense pressure for Marvel to introduce certain characters - namely Wolverine, the most famous of the X-Men. But here's why Marvel would be wise to hold off on rebooting Wolverine into the MCU for quite some time.

Hugh Jackman played Wolverine for 17 years, from 2000 to 2017, and he's strongly associated with the role. The Australian actor was a surprise choice when he was picked for the part, and he didn't even know what a wolverine was when he started out. Visually, he looks nothing like the comic book version, who's short, hairy, and has never been considered eye-candy. And yet, Jackman's excellent performance meant he won people over straight away. He's continued to play Wolverine ever since, playing the part in nine different movies to date (including a hilarious cameo in X-Men: First Class). When Jackman finally decided to bow out, Fox wisely decided to make a film centered around Wolverine's death, and Logan is considered one of the strongest movies in the entire X-Men franchise.

All this means that, for Marvel, recasting Wolverine is problematic. They didn't face any real issues when it came to recasting Tom Holland as Spider-Man; after all, there had already been two other big-screen incarnations of the wall-crawler since 2002. Likewise, they have no real issues with some of the other X-Men; two actors have played Professor X, there have been two different portrayals of Magneto, and even characters like Cyclops and Nightcrawler have been played by different people. But Hugh Jackman has stayed on as Wolverine, a constant presence in the X-Men movies, so closely tied to the role that even Fox doesn't seem interested in signing up his replacement. Marvel will face a difficult challenge when it comes to choosing a new actor, simply because everyone will want to compare him to Jackman.

Related: In Development MCU Projects That May Secretly Be TV Shows

The closest comparison, really, is Blade. Wesley Snipes played Blade the Vampire-Hunter in three tremendously popular movies back in the late 1990s and early 2000s. As Kevin Feige himself has acknowledged, Blade was one of the franchises that launched the modern superhero era - all the more amusing as most moviegoers didn't even realize he was a comic book character in the first place. Given Blade's popularity and historic box office success, when Marvel regained Blade's film rights it would have been natural for them to push the antihero as a priority. Instead, Marvel has held off, allowing Blade to become what Feige has called a "legacy character." It's a mark of respect to Snipes and the three Blade films, and it will mean that he will have a massive impact when Marvel do eventually get round to using him. The same would be true of Wolverine; putting the character on pause would allow time for Jackman to become a well-respected memory, with the relaunched version standing as an exploration of his legacy. If Blade is any indication, interest won't lessen with time; it will only increase.

It's Time To Learn From The X-Men's Greatest Mistakes

Now, it's possible to argue that this isn't a problem. After all, in a free market, popular ideas are the ones that sell well. Unfortunately, though, this almost-relentless focus on Wolverine has had two major negative effects on the X-Men franchise as a whole. The first, ably demonstrated by Fox's X-Men movies, is that it often led to other X-Men not really getting their chance to shine. That's most notable in X-Men: The Last Stand, where James Marsden was finally given an opportunity to act - right before being killed off so the plot could focus on the sparks of attraction between Jean Grey and Wolverine instead. The same issues are seen in certain comic book runs as well, with secondary characters frequently overshadowed by Wolverine.

Related: Wolverine's Best Comic Costumes (That Can Work in The MCU)

But this also causes massive problems for Wolverine himself, as the hero was shoved into stories where he didn't quite fit. As a result, at any one time he could be serving as an Avenger, an X-Man, and leader of a black ops X-Force unit. He could be presented in so many different ways; as a savage killer struggling to keep his animal instincts in check, a noble Samurai, a man haunted by his past, a free spirit untroubled by his lack of memories, even as a headmaster and authority figure. Every writer seems to have their own version of Wolverine, based on an interpretation they most connect with, and often all these different versions are being published at the same time. Ultimately, this lack of definition - coupled with a sense that he was becoming overexposed - led the comics to kill him off in 2014, a useful way to retire the character and give time for the brand to recover from the damage it had suffered. Wolverine was only recently resurrected.

The MCU often brings Marvel Comics' best stories to the big screen, albeit in heavily adapted formats. But it's essential that the movies also avoid Marvel's mistakes. The X-Men were created before Wolverine was even thought of, and many of their best stories don't feature him in a major role at all. Marvel will no doubt be tempted to focus in upon him, but that temptation must be resisted. Delaying the introduction of Wolverine allows a rebooted X-Men franchise a chance to take shape without him, so he then becomes a part of the picture rather than defining and dictating it.

A Gradual Build-Up Is More Effective

In truth, introducing the X-Men into the Marvel Cinematic Universe will be a difficult challenge for Marvel. There are so many major ideas and concepts at the heart of the X-Men franchise, ranging from genetic mutation itself to the X-Men's battle against prejudice and bigotry. Even in the comics, these have often sat uncomfortably alongside the Avengers as part of the same shared universe. Why do people celebrate the likes of Captain America and Thor, and yet fear Cyclops and Jubilee? Why don't the Avengers ever intervene to prevent acts of violence against mutants - even standing by and watching while an entire island populated by mutants, Genosha, was obliterated in an act of genocide? When the X-Men and the Avengers do come together, this thematic problem leads to an uncomfortable sense that the two groups are vaguely opposed to one another. There's a reason the 2012 comic book event featuring both franchises was called Avengers Vs. X-Men.

Related: Daredevil Season 3 Reveals How Wolverine Can Join The MCU

Marvel Studios will want to build a far more cohesive world than the comics, where the X-Men and the Avengers sit side-by-side far more comfortably as part of the same shared universe. That will mean the best approach will be to gradually incorporate elements of the X-Men mythology into the MCU. Naturally, it's too soon to say how this could be done; The Eternals could present the history of the X-gene, the Vision & the Scarlet Witch series could redefine Wanda as a latent mutant and even introduce Magneto, or a cosmic event could trigger spontaneous mutation across the world. However it's done, though, it will need to be done carefully - and the focus must be on establishing mutants as part of the MCU, not just Wolverine.

With mutants on the scene, Marvel could then begin a gradual buildup to introducing Wolverine. They could drop Easter eggs to Team X, a black ops team of mutants; they could reference the Weapon X Project as the next development of the super-soldier program; T'Challa could hear rumblings of a new alloy called Adamantium. A breadcrumb trail of clues would lead viewers to the realization that Wolverine was coming - and the growing hype would be intense. By the time Marvel did introduce Wolverine, the film featuring their new version would be a guaranteed blockbuster. Essentially, this approach involves Marvel playing the "long game" rather than focusing on the short-term benefit of adding Wolverine into the mix - and it's a much smarter way to do it.

This entry was posted by Screen Rant on January 11, 2019 at 4:01 am, and is filed under TV News. Follow any responses to this post through RSS 2.0. You can skip to the end and leave a response. Pinging is currently not allowed.