MCU Theory: Guardians of the Galaxy’s Missions Are All Captain Marvel’s Fault 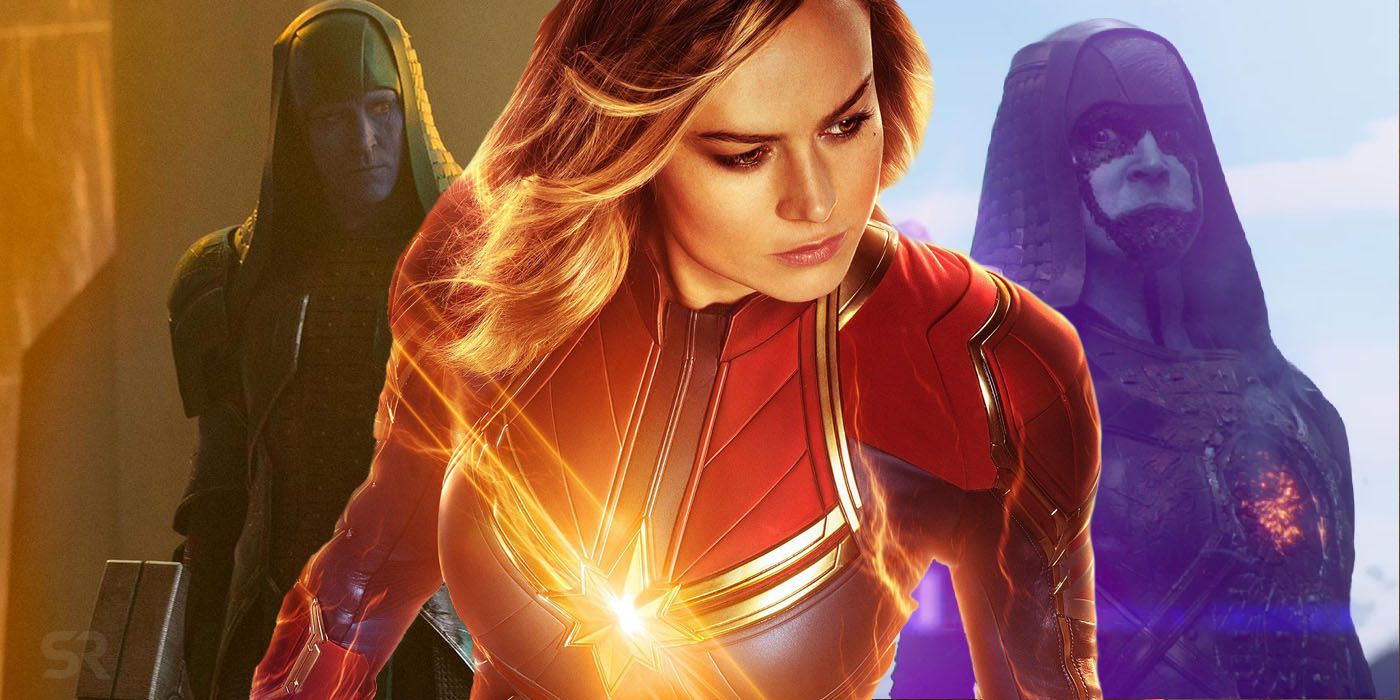 By featuring Kree villain Ronan the Accuser, Captain Marvel is in a perfect position to retroactively set up the Guardians of the Galaxy movies. Set in 1995, Captain Marvel is essentially a prequel to the entire Marvel Cinematic Universe. It tells a previously-untold story of the young Nick Fury and Phil Coulson, is expected to reveal just how Fury got the idea for the Avengers Initiative, and even features the Tesseract. But there are also strong links to the Guardians of the Galaxy movies, with Captain Marvel including Lee Pace's Ronan the Accuser and presumably explaining just why he went rogue.

According to Djimon Hounsou - who is reprising the role of Korath the Pursuer, a secondary villain from Guardians of the Galaxy - Captain Marvel isn't just set-up. "This is a completely separate story," he insisted during the set visits. And yet, the fact remains that Marvel's shared universe model means that the stories will inevitably be connected in some manner. The only question is how.

So far, attention has been understandably focused on two characters: Brie Larson's Captain Marvel and Jude Law's Starforce Commander. By now it's looking pretty certain that Law is playing the villain character Yon-Rogg - tie-in merchandise like Hasbro's Marvel Legends action figures have confirmed as much. And yet, by refusing to confirm anything officially, Marvel keeps the focus on Law, which means nobody is really discussing what Ronan's role could be - and how Captain Marvel could set him up for his position as main villain in Guardians of the Galaxy.

The Kree Value Purity And Honesty

To understand Ronan the Accuser, you first have to understand the Kree race that he's part of. In one trailer Captain Marvel describes the Kree as "noble warrior heroes," and she's probably reflecting just how the Kree perceive themselves. But it's important to remember that every villain believes they're the hero of their own story. In reality, there's growing evidence that the Kree are really a race of fascists. The recent Captain Marvel trailer featured a voice-over from Jude Law's character in which he declared, "We are Kree! Strong! United..." It's clearly part of a motivational speech, presumably one he's delivering to his Starforce unit, and its themes are notably fascist. Fascism proper is usually a racial philosophy that stresses the superiority of one race over others, and attempts to unite its people under a dictatorial leadership. That's most definitely implied by Law's speech, with his focus on the strength and unity of the Kree race; the leader in question is most likely the Supreme Intelligence.

Like many fascist societies, the Kree appear to largely define themselves by conflict. They're known to have been engaged in at least two galactic-wide wars, against both the Skrulls and the Xandarians, and these have lasted for centuries - possibly even millennia. The Kree seem to burn with a particular hatred of the Skrulls; according to Jude Law, the shapeshifting aliens represent everything the Kree are opposed to. "The Skrulls to the Krees really represent despicable maneuvering and manipulation," he explained. "The Skrulls have this way of simulating other people and turning into other things, so it's this idea of subterfuge where you're not who you really are, whereas the Kree have a kind of purity and honesty to them as I see it." In the comics, millennia of war against a shapeshifting race had created a sense of cultural paranoia among the Kree; their culture had come to hate anything false, and Kree society became fundamentally opposed to ideas of deception. Given everything we know, it seems reasonable to assume the same is true in the MCU as well.

This makes Captain Marvel's entire backstory a challenge to the Kree race's sense of self-identity. It's already been confirmed that the film begins with Captain Marvel serving as a member of the Kree elite unit called Starforce; she appears to be an amnesiac who believes herself to be a Kree named "Vers" (a name taken from a fragment of her "Carol Danvers" dog tags). The truth seems to only be known by senior figures in the Kree leadership. There's one scene in the trailers where Annette Bening explains Captain Marvel's origin - and the very fact she needs to do so strongly suggests the truth had previously been concealed. Notice that the conversation was happening in private, and that the room they're in is a design lifted straight from the comics. In the comics, it's the chamber that houses the Supreme Intelligence itself. The clear implication is that only the highest echelons of Kree government even know that Vers isn't a Kree.

So far, the focus has been on how the shocking revelation of her past will affect Carol Danvers. But what impact would this revelation have upon the Kree race? Remember, this is an autocracy - almost a theocracy - centered upon the Supreme Intelligence's rule. Now the Supreme Intelligence, or its leaders, have been found to be guilty of a massive deception. Worse still, one of the Kree's elite Starforce unit - a military unit who are probably quite celebrated - wasn't actually a Kree at all. If this becomes public knowledge, it will send shockwaves through Kree society.

Does This Explain Why Ronan Went Rogue?

Skip forward to 2014 - the year Guardians of the Galaxy is set in - and the Kree race are in a very different position. The Kree leadership appears to be winding down its wars, even negotiating a peace treaty with the Xandarians. Kree society seems to have fragmented, with some Kree breaking off from their people and becoming renegade warlords. The most prominent of these, but possibly not the only one, is Ronan the Accuser. He views the peace treaty as a betrayal of what it means to be Kree, and wishes to stand in judgment against the ancient enemies of his people. Ronan has been conducting surgical strikes against Xandarian ships, and is doing his best to disrupt the fragile peace. When he gets his hands on an Infinity Stone, however, his plans escalate and he seeks to destroy the entire planet of Xandar.

What happened to the Kree between the events of Captain Marvel and Guardians of the Galaxy? How did a race who have been at war for millennia wind up suing for peace, and why did a loyal member of the Kree military go rogue? The answer may lie in the revelation that Starforce member Vers is a human. The discovery that the Kree leadership had been engaging in subterfuge would lead the Kree to do something they had never done before; they would begin to question their leaders. The Supreme Intelligence's near-godlike authority would be challenged, and perhaps completely undermined. Military commanders, who had potentially been privy to the secret, would no longer be respected. Over the course of the next 20 years, Kree society would fragment and change, and it's not inconceivable that the Kree public would begin to turn against war.

Ronan, for his part, would be horrified at all this. It's possible he was one of the few who knew the truth, in which case he's a loyal servant of the Supreme Intelligence who'll lose the prestige and authority he's used to. Alternatively, it's also possible he wasn't in on the secret, in which case he presumably views the Supreme Intelligence as a traitor to the Kree - a force that betrayed the Kree by abandoning their ancient ways. Whatever the case may be, Ronan would be shaken by the people's willingness to pursue peace. As new leaders arose, he'd find himself in opposition to them; an isolated voice calling for a resumption (and most likely an escalation) of the ancient wars. His dream rejected, he became a renegade.

In a strange sense, this means the events of Captain Marvel could actually be the reason for the events of Guardians of the Galaxy. Carol Danvers' secrets could well be the reason Kree society was fundamentally transformed, and if that's the case it's one of the smartest narrative connections in the MCU to date.