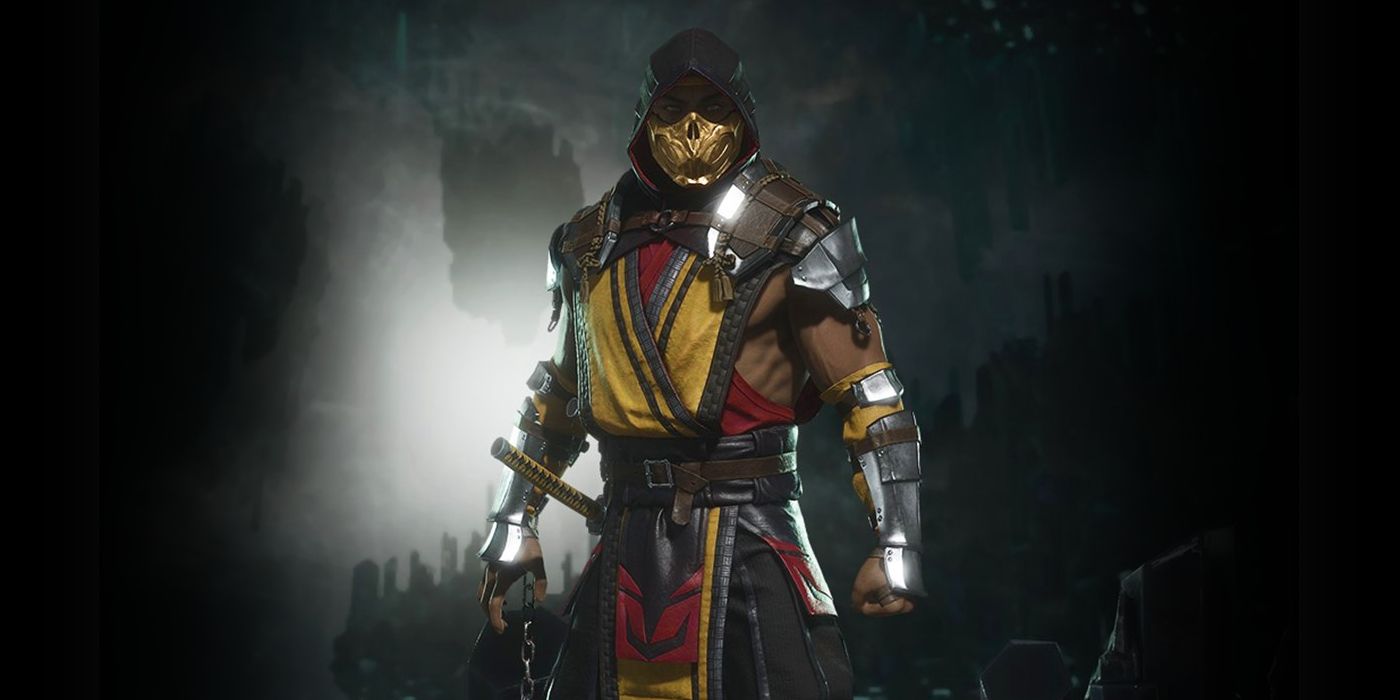 The official Mortal Kombat Twitter page dropped new images showing what Scorpion, Raiden, and Shao Khan look like in Mortal Kombat 11, and the ruthless characters' new designs can be described as nothing less than badass. Mortal Kombat fans got their first look at the Shirai Ryu Grandmaster and protector of Earthrealm in a bloody trailer early last December, but this latest batch of images provides a better frontal look each character - and this time Scorpion keeps his head, so to speak.

Mortal Kombat 11 was officially announced alongside the launch of its cinematic reveal trailer on December 6, 2018, though the game's existence had been unofficially confirmed by a fed-up voice actor nearly a month beforehand. These characters' promotional spotlight comes on the lead-up to NetherRealm Studios' and publisher WB Games' hotly anticipated January 17 event in London, during which they'll give players their first glimpse of Mortal Kombat 11's other fighters and gameplay. Screen Rant will be there providing unmatched live coverage, so check in on January 17 at 10:30 PST/1:30 EST to learn a whole lot more about what the upcoming game has in store.

Related: Todd McFarlane Hints Spawn Will Be in Mortal Kombat 11

The closer look at the reimagined Scorpion was revealed on January 12 on the official Mortal Kombat 11 Twitter, captioned, "Shirai Ryu do not run. We fight." Being one of three (two-and-a-half?) characters featured in the Mortal Kombat 11 reveal trailer and a fan favorite since the series' inception, it's little surprise Scorpion's redesign is among the first to be advertised by WB Games. His new and improved image not only looks cool, but also makes practical sense from a lore standpoint. In Mortal Kombat X, Scorpion is resurrected from his vengeful specter form by Raiden, in exchange for Scorpion's reformation of the Shirai Ryu ninja order that he has spent an afterlife trying to avenge. Accordingly, his lightweight armor, red and yellow Shirai Ryu garb, and ornately intimidating face mask are functional reflections of his status as the deadly leader of a fearsome shinobi clan.

The Scorpion tweet is the latest of three published by the Mortal Kombat Twitter since January 7, with the previous tweets showcasing the upcoming game's redesigns of Shao Khan and Dark Raiden. Raiden, who brutally decapitates Scorpion before being violently eviscerated by his victim's classic form in the reveal trailer, is shown in his dark form (given away by his glowing red eyes), clad in lustrous gold armor, a black undersuit, and his distinctive conical hat. Meanwhile, Shao Khan, the merciless ruler of the hellish realm of Outworld, wields his instantly recognizable hammer and looks even more threatening than in his previous appearances, with the sharp points of his huge helmet and spaulders looking more dangerous than ever.

Based on the gory visuals and intense pace of the reveal trailer and these glimpses into NetherRealm Studios' tweaks of the series' art style, Mortal Kombat 11 seems to be shaping up to be a solid entry into the longstanding fighting franchise. With a possible animated feature in the works, the future looks very bright for the series as it confidently approaches its 27th anniversary. For more information about Mortal Kombat 11, be sure to check into Screen Rant's live coverage of the game's fast-approaching gameplay and character reveal event on January 17 at 10:30 PST/1:30 EST.