Netflix’s You: 10 Things We Want To See In Season 2 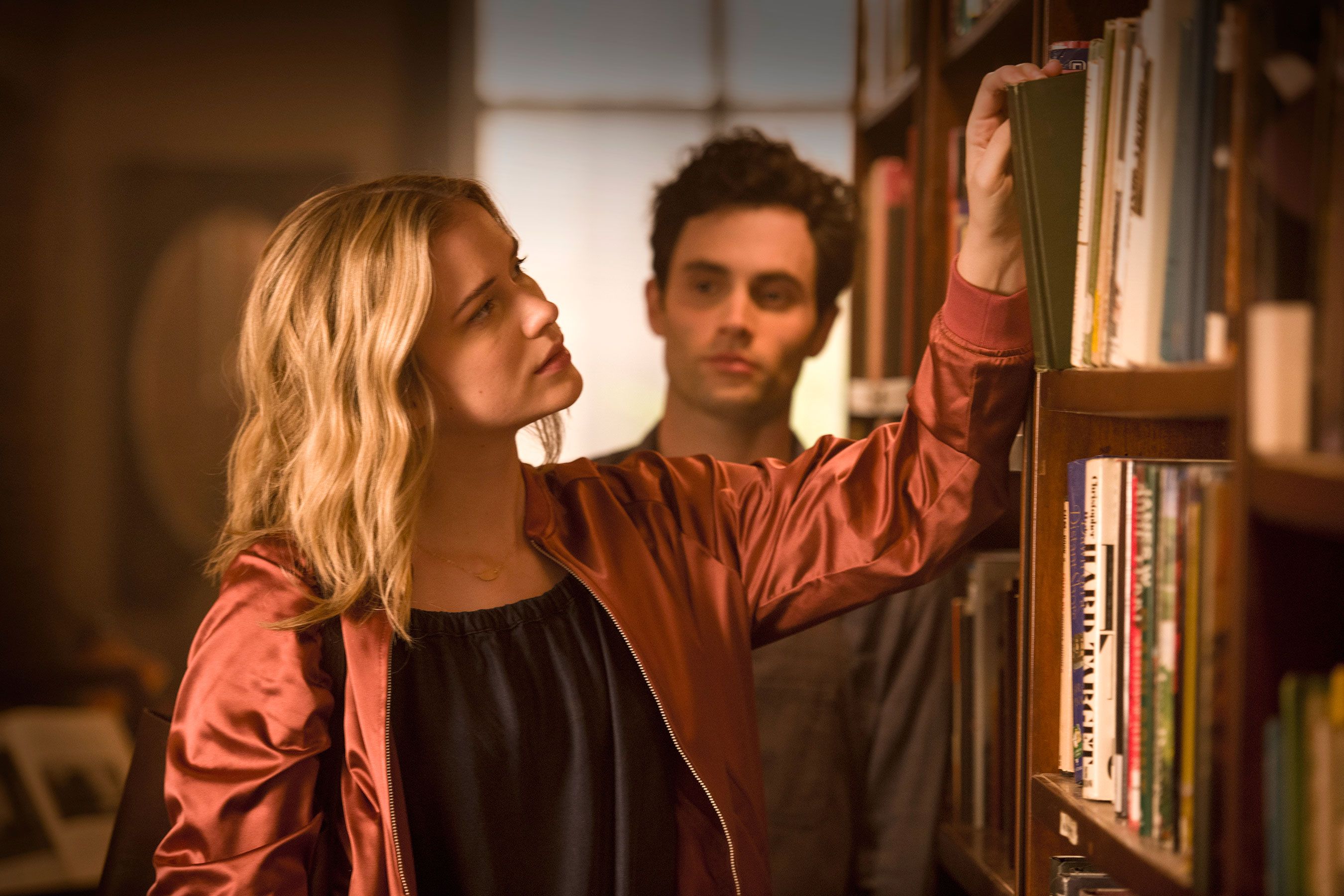 Netflix confirmed last week that it would be bringing Lifetime’s You as a Netflix Original Series for a second season. After its Netflix premiere, the adaptation of Christine Kepnes’ book series drew respectable numbers and an excited fan base.

The first season, which stared Penn Badgley as the psychotic but disarming Joe Goldberg, left fans with a lot of questions and with more than one loose ends for Joe. A few things are known about the second season already, like that it will take Joe to Los Angeles, but most is yet to be seen. Some fans will read the second book in the Kepnes’ series, Hidden Bodies, for clues to the second season, but without being precious to the book, here are our top 10 things we want to see in season tw0.

Spoiler note: This does contain spoilers for season one but not for Hidden Bodies, as it’s unknown how closely the show will follow the book.

Badgley is no stranger to this sort of role, many have made the link between Joe Goldberg and Dan Humphrey of Gossip Girl. His performance shows that he knew exactly how he wanted the audience to respond to Joe. He wanted us to feel sympathetic at times, even start to believe the lies he fed to Beck before remembering oh yeah, he’s a killer. However, Badgley does not want the audience to romanticize Joe. He’s responded to fans who are lusting after the character, making it clear that he plans to make Joe indefensible in season two.

Joe Goldberg isn’t your typical psychopath character. He’s not overtly charming, he’s a little bit awkward, and all of that contributes to everyone, including us, letting down their guard around him. In season two, we’d like to see him get a little bit colder like he is in his darkest moments. Badgley is a great actor, he could take inspiration from some of the best psychopath performances and deliver something truly excellent.

For the vast majority of You, we see the world through Joe’s beautiful, delusional eyes. He narrates the entire first part of season one, so everything we understand about Beck comes from his mind. Then about halfway through, we get to see the story through Beck’s beautiful, delusional eyes. It’s a sudden shift and it doesn’t last long, but it was such a refreshing change of pace. By changing up the narration, we got a more reliable understanding of how certain events went down. That said, they didn’t ever bring back Beck’s narration, so what was the point? The next season would benefit from that multiple narrations, possibly from Candace or Joe’s next target, even if it’s just peppered in.

Hopefully, we can all agree that Beck did not deserve to die, regardless of her infidelity or other flaws. Still, as far as female protagonists go, Beck didn’t do it for a lot of fans. Perhaps that was by design, as for the most part, we’re seeing her through Joe’s delusional eyes.  Even in the parts where she narrates her own story, she comes off apathetic. She’s not a bad person, but we never get the sense that she genuinely cares about anyone other than herself. Season two could desperately use a woman to step in as the hero of our story. Maybe Candace could be that hero.

Season one ended on one heck of a reveal. Candace, Joes’ ex who most people were convinced was murdered by Joe herself, shows up at his doorstep. Joe is shocked that she’s there, but beyond that, the dialogue suggests he’s shocked she’s even alive. That doesn’t make a whole lot of sense when you remember that in the lead up to Joe locking Beck in an actual cage, he showed her Candace’s Instagram, displaying that she had a new life but was very much alive. What gives? Did Joe actually think she was dead? Clearly, it’s not as innocent as he makes it out to be; but then what really did happen between the two of them? We need some serious answers on this one.

RELATED: What To Expect From YOU Season 2

You may be mostly focused on Joe and Beck, but it also presented a really interesting cast of supporting characters. From Mr. Mooney to Peach Salinger, Anikka and Lynn, Ethan and Blythe, not to mention poor little Paco. They round out the show and give us an additional sense of emotional attachment. The only problem is, we don’t actually get to spend that much time with them or truly understand who they are and what they want. Again, everything is from Joe’s perspective. Season two would be wise to dedicate more time to these awesome supporting characters beyond how they affect Joe’s life.

Among our favorite supporting characters is Shay Mitchell’s fantastic performance as Peach Salinger, Beck’s best friend and secret admirer. Her role in this story is important because she acts as a mirror for Joe that he is unable, or otherwise unwilling, to look at. Her obsession with Beck is no healthier but it’s also no worse than what Joe does.

In fairness, she didn’t kill anyone… that we know of at least. It becomes an important point for the audience’s relationship with Joe when he finds out her secret and subsequently tries to murder her. He understands that what she is doing to Beck is not love. Still, he can’t see it within himself.

Justice for Peach may mean Joe finally seeing this clearly and realizing that he villainized a woman for doing exactly the same thing as him.

When Joe killed the man that Candace was having an affair with, he went to Mr. Mooney, the bookstore owner who was like an adoptive father to him. Together, the two of them cleaned up the mess and got rid of the body. In fact, Mooney knew exactly what to do, and not in the “watches too much Law and Order” kind of way. It was blatantly obvious that Mooney had done this before. Not to mention, the man literally has a glass cage with a door for food in the basement of his shop and has convinced everyone this is totally normal. We have questions. Rumor has it season two will get more into Joe’s childhood and by extension his relationship with Mr. Mooney, so we should see some resolution here.

3. The Mason Jar Of Pee To Make A Comeback

This has to be one of the most insane things he does in his quest to keep Beck all for himself. While stalking her and her best friend Peach in Peach’s vacation home, he relieves himself into a mason jar on a shelf and completely forgets about it. Don’t worry, we didn’t. When you introduce a plot device like this, it creates a sense of suspense among the audience until it’s resolved. From the end of the first season, we know the investigators have found it and Joe wonders if urine even holds DNA. This could easily be the catalyst for Joe getting out of dodge and moving across the country. One way or another, this gun has to go off.

RELATED: Netflix Original TV Shows To Be Most Excited About In 2019

It’s not that we want to see more people die at the hands of Joe Goldberg. It just doesn’t strike us that he’s going to LA to be a reformed former murder looking for love in all the wrong places. He killed at least one person “for” Candace, four people including Beck for Beck, so there’s a potential pattern here. Also, from the title of the book, we can reasonably assume that he’s killing at least two people this season in order to qualify as bodies plural. It only makes sense for each new obsession to lead to more and more death, so we could easily be looking at half a dozen this time around. Someone really needs to catch this guy.

1. Joe Gets His Comeuppance

At the end of the first season, viewers were shocked to see that not only did Joe kill the object of his obsession and girlfriend Beck, but the jerk got away with it! Joe framed her therapist Dr. Nicky (who was, in fairness, having an affair with a patient but not a killer) for Beck’s murder. That brings the total number of people killed by Joe in one season to four for those of you who are keeping track at home (five if you count the flashbacks). Joe may think getting out of town is game over, but we’re ready to start seeing this come back to bite him, one way or another.

NEXT: Gossip Girl: 20 Things That Make No Sense About Dan Humphrey

This entry was posted by Screen Rant on January 17, 2019 at 10:01 am, and is filed under TV News. Follow any responses to this post through RSS 2.0. You can skip to the end and leave a response. Pinging is currently not allowed.