New Brightburn Photo Shows Off the Dark Side of Superheroes 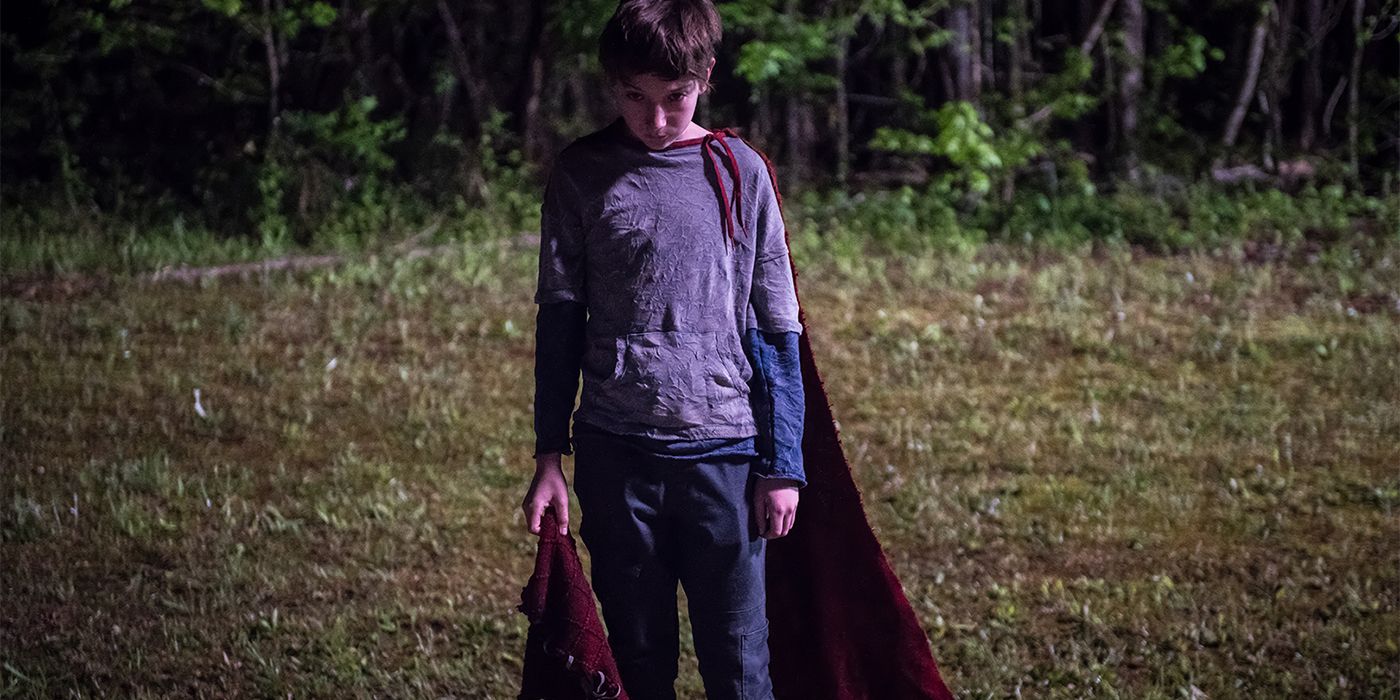 Sony shows off the dark side of superheroes in the latest photo from Brightburn, a horror film co-developed and produced by James Gunn. While an increasing number of modern superhero movies have drawn from other genres, they've only really begun to branch out into the realm of horror, with films like Venom. That trend will pick up speed in 2019, thanks to upcoming releases like M. Night Shyamalan's thriller Glass and Neil Marshall's R-rated reboot of the Hellboy franchise, ahead of Brightburn's release near the end of May.

Brightburn, which was written by Gunn's brothers Brian and Mark and directed by David Yarovesky (The Hive), is essentially a dark retelling of the Superman story that starts off with an other-worldly child crash-landing on earth and being cared for by a small-town married couple (Elizabeth Banks and David Denman). However, unlike Clark Kent/Kal-el, it turns out the child has a dark side and slowly becomes more and more dangerous as it develops its super-human abilities. In time, the young boy (Jackson A. Dunn) even puts on a cape and adapts a not-so-friendly superhero moniker for himself: Brightburn.

Gunn originally planned to present Brightburn at Sony's San Diego Comic-Con Hall H panel last July, but backed out after Disney fired him from Guardians of the Galaxy 3 a day earlier. The project went on radio silence for a few months after that, until Sony announced its title and officially pushed the film back from a November 2018 release to May 2019. Since then, the Brightburn trailer has dropped online - following its premiere at Brazil's Comic Con Experience back in December - and a handful of official stills have been released, including the new image featured below.

Most people were quick to pick up on the parallels between the Brightburn trailer footage and the Superman movies before it, especially Zack Snyder's 2013 DC Extended Universe launcher Man of Steel. This new photo further begs comparisons to Snyder's Superman film, specifically a flashback scene in which a young Clark Kent is shown wearing a makeshift red cape, much like Brandon Beyer (aka. Brightburn) here. It only makes sense for Brightburn the film to draw inspiration from Man of Steel for its twisted take on the Superman mythology and its iconography. After all, Snyder's movie is not only the most grounded Superman film ever made, it's also one that explores the character's origin story from a fresh angle, much like Brightburn aspires to do (in a very different way, of course).

Still, as interesting as Brightburn's premise is, it remains to be seen if people (in large numbers) actually want to watch a movie where Superman is the bad guy. It's the sole horror film set to hit theaters near the end of May (save for an untitled Blumhouse movie scheduled to arrive a week after, on May 31), so it's possible those in the mood for a scare will take a shot on the movie, however they feel about the idea of "evil Man of Steel". Either way, Brightburn sounds like an intriguing mashup of genres, as well as one of 2019's less conventional superhero offerings.