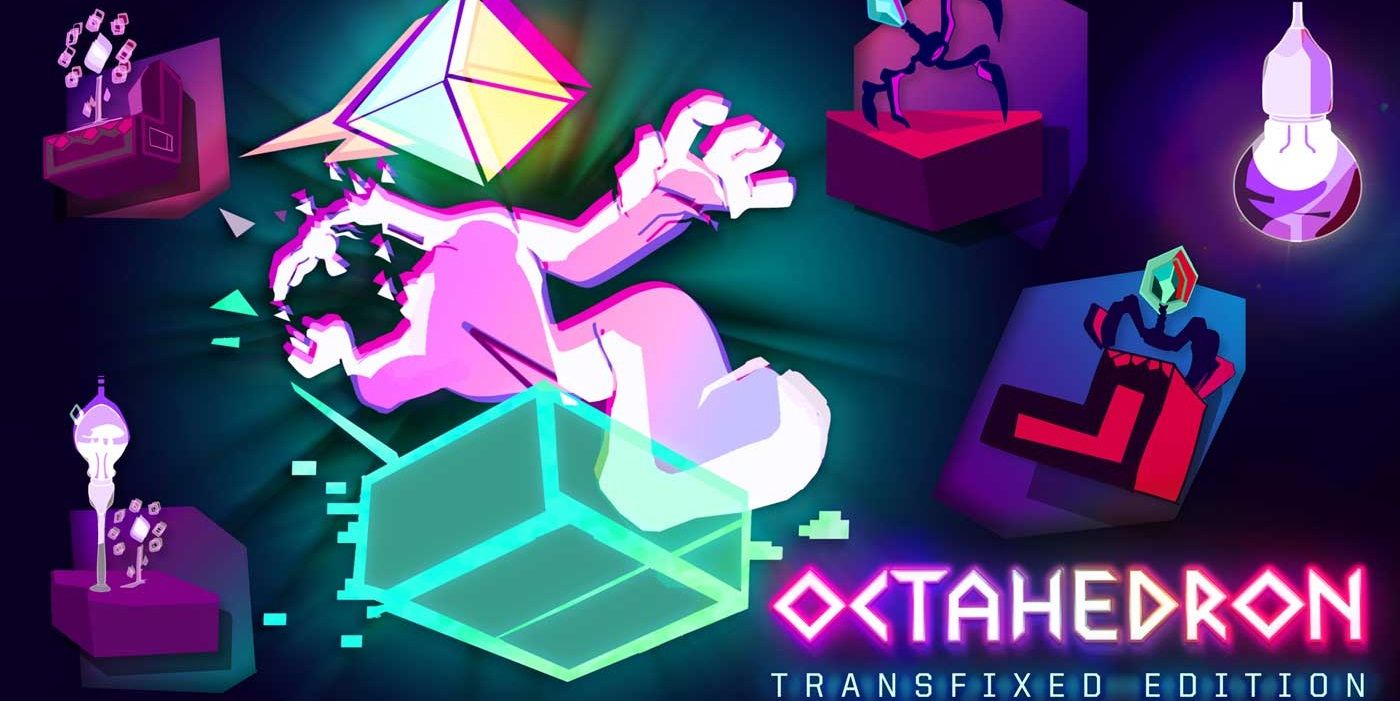 Octahedron: Transfixed Edition might appear to be a platformer with its colorful retro graphics and gameplay that relies heavily on jumping. but it's more accurate to call Octahedron a puzzle game. In Octahedron it's imperative to think before leaping in this excellent cerebral challenge that perfectly marries the intensity of platformers with the gratifying problem solving of puzzlers.

In the most basic terms Octahedron is an action platformer with the ability to create platforms. This might sound like the game is incredibly easy since the traditional challenge of a platformer is reaching the end of a stage with limited areas provided. The exact opposite is true here as it's impossible to play Octahedron without using those extra platforms with precise placement. The objective of Octahedron isn't about executing jumps and leaps from each platform but in choosing where to put those platforms to jump and leap successfully. It's a subtle twist on the formula but it pays off in a huge way to create an unique experience.

Octahedron starts things off very simple. In the earliest stages the player has two deployable platforma they can use without waiting for a recharge. These platforms do nothing but remain static allowing the player to move vertical or horizontally. As Octahedron progresses more abilities are added. In later levels Octahedron adds not only more powers to platforms (like projectiles to destroy enemies) but more platforms in general. The core of Octahedron is about figuring the best route forward.

Although the levels of Octahedron grow exponentially in length (it'll take about 10 hours to beat the game from start to finish), each is broken up into segments. Those segments are their own isolated puzzles with their own start and end points. The goal is obvious but how to get there by mixing together the created platforms with the section's own quirks is an enticing mystery.

Even more intriguing is that each stage is filled with collectibles, most of which aren't immediately obvious. Collectibles in platformers are nothing new but the way Octahedron encourages players to sit down and think about how to acquire everything. These brainstorming sessions make Octahedron feel more akin to The Legend of Zelda than Super Mario Bros. in this respect. There are scores rewarded for how quickly an Octahedron stage is completed but it's far more satisfying to ignore the time and just sink deep into the level's challenges.

While Octahedron's gameplay is stellar as a port, the Switch version does disappoint. There are no issues with the framerate in either docked or handheld mode which is essential in a game like this one. Even though a lot of explosions and colors are happening on-screen Octahedron never slows down. The problem is more in the visuals while playing in handheld mode.

Octahedron isn't a technically impressive game. It's made in an intentionally retro style (and again, by a single dev) but the game enhances its simple 2D design by having nearly everything and everyone in the game pulse or explode with color. In the Switch's docked mode with Octahedron displayed on the TV these visual flourishes are a treat. In handheld mode it's too easy to lose track of the small Octahedron-headed character resulting in many unearned failures. Octahedron is a bit of headache inducer while playing in the Switch handheld. There's too much happening and not enough space. As for Transfixed Edition's Switch exclusive features like new time trials and post-game unlocks, they're interesting but not worth repurchasing Octahedron if it's already owned on another platform.

Octahedron is still a great experience for platformer fans or puzzlers, but especially the latter. On a large screen, Nintendo Switch owners are getting the same visual and gameplay treat as any other gamer with the original version of Octahedron. In handheld mode Octahedron is far from unplayable but it's not the ideal way play. This is a shame because Octahedron's segmented stages would be perfectly model to the Switch's pick up and play attitude.

More: Nintendo Switch Had The Most Great Games According to Metacritic