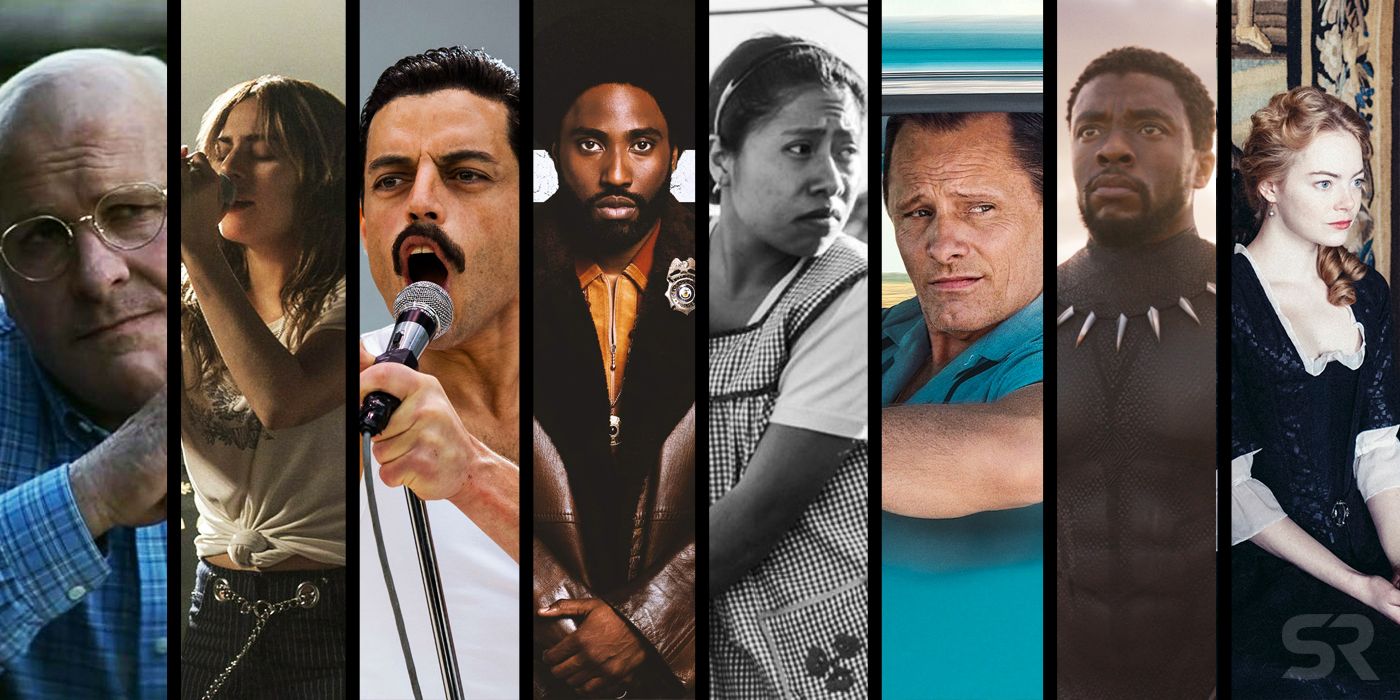 The Oscars 2019 Best Picture nominees include some great films, some not so great - here's our ranking of all eight. The 2019 Academy Award nominations are some of the most controversial in recent years, with less in the way of snubs and more surprising steamrolls.

To be fair, this year's awards race has been a rather odd one from the off, with many movies proclaimed as front-runners early on - First Man, If Beale Street Could Talk, Widows - falling by the wayside as they failed to connect with audiences en masse, leaving a wide open race. In the past months, as various critic groups and guilds announce their nominees and the Golden Globes crowned two surprising winners, it's become clear that there was going to be a gulf between pundits and awards voters.

The results include an odd mix of old-school Oscar bait and progressive social commentary, some of it confusingly mixed together into the same film. Now that everybody's had their say and the predictions are made, it's time to take a closer look at the films leading the pack. Here are the Oscars 2019 Best Picture nominees ranked worst to best.

Queen's Greatest Hits 1 is a compilation album so good it now has an Oscar nomination. Strip Bohemian Rhapsody of its music - all of which is blatantly reproduced from the band's albums or live recordings, with the actors doing very little beyond lip-sync - and it's a rote musical biopic with a knockout central performance from Rami Malek as Freddie Mercury and a stellar (if CGI heavy) final sequence. The band's long-gestating biopic is a crowd-pleaser for sure - thanks mainly to that music - but offers surprisingly little more; you'd be forgiven for not even learning the name of all four band members its approach is so light.

The optics on the film are incredibly confusing. Its handling of Freddie Mercury's story sands off so much it's barely his, while reframings - such as Brian May's Highlander song "Who Wants To Live Forever" adjusted to be about Mercury's AIDs diagnosis because that title - further confuse things, and that's before you get to the behind-the-scenes wrangling to replace Bryan Singer with Dexter Fletcher following terrible on-set behavior and sexual assault allegations. Truly a surprising contender.

In a year that includes so many strongly-motivated explorations of race and prejudice in unique ways, it's galling that Green Book managed to sneak in an Oscar nomination. White guilt has been the default way to handle racism in Hollywood for decades and the Academy has loved it (as many have pointed out, Green Book is in many ways a reverse Driving Miss Daisy), but in 2019 it feels rather antiquated.

Unsurprisingly, Peter Farrelly's film has been subject to controversy on all sides - from its bedtime story account of Don Shirley to the comments from writer (and real-life son of Viggo Mortensen's character) Nick Vallelonga - but fundamentally it's just not a very impressive picture. There are game performances and a lightness to the handling of the narrative, but that often robs it of deeper commentary; Shirley's homosexuality is mined for more "difference" rather than character. The entire purpose of Green Book is to make the audience - presumed white - feel bad but in doing so atoned, with manipulative music and an "aw gee" redemptive arc for Mortensen, and that's really not enough.

Vice opens by stating the quietest person in the room is also the smartest, then proceeds to spend two hours screaming about how smart it is. Christian Bale goes all in as Dick Cheney and has fantastic support from a The Master-channeling Amy Adams, caricaturish Sam Rockwell and slimy Steve Carrell, but their efforts are wasted when Adam McKay's directing is so working against. His style of constant fourth-wall breaking is initially entertaining but ultimately makes it impossible for him to make a proper point. As with The Big Short on the financial crisis before it, this invests a lot of time making Dick Cheney appear more complicated than he needs to be just so it can then delight in simplifying it to explain it to the masses; it's interesting but hardly enlightening.

A post-credits scene where the film calls out Fast and the Furious for being empty entertainment may appeal to Academy voters, but comes across as contemptible considering Vice was made by the director of Anchorman: The Legend Continues.

Yorgos Lanthimos is a divisive director. Both The Lobster and The Killing of the Sacred Deer are critical darlings, yet for many his monotone, black comic delivery can be too oppressive. Thankfully, with The Favourite he's only on directing duties, meaning his efforts can be somewhat more focused. This is a decadent film, a lavish, stylized recreation of 1700s England full of weird animal games and physical power plays, shot in fisheye lenses that shed any sense of this being a royal movie. The core trio of performances from Olivia Colman, Emma Stone and Rachel Weisz are career best for each, and if none end up winning on the night that's only down to the quality of competition.

It's just a shame that, for all the visual and technical majesty, The Favourite doesn't have a very engaging story to latch onto. The bickering between Queen Anne and her close confidants escalates suitably, yet the dryness of its delivery serves as a barrier.

Page 2 of 2: The Best Movies Nominated For Best Picture

First the bad. A Star Is Born has a completely misguided ending, one that directly translates something from 1937 far too directly and thus robs both main characters of their realism. This is a problem with all previous versions and Bradley Cooper keeps far too much, ending the movie on a dud note.

That said, the first hour of A Star Is Born is borderline transcendent. The meet-drunk of star Jackson Maine (Cooper) and jobbing waitress Ally (Lady Gaga) is carefully and slowly built up until all the emotiona comes out during a duet on-stage performance of the film's signature anthem, "Shallow". Cooper's handling of the live music is the highlight, with smart footage shot at real festivals putting the audience right there on the stage. It's a knowing prestige picture, but it hits many of the right notes so that's not too egregious. The problems really do only come in when it has to beeline for A Star Is Born's prescriptive ending.

Read More: A Star Is Born's Ending Is Bad (And Always Has Been)

The first superhero movie nominated for Best Picture, Black Panther is truly a landmark blockbuster. And while so much of its awards campaign has hinged on the cultural significance, it's important to remember that it is also just a really good film. Ryan Coogler stepped up to the Marvel plate with something that ostensibly followed all the superhero beats yet thanks to a nuanced script also deconstructed the various societal ways we deal with colonialism and its remaining impact on the world. The villain set up in Avengers: Age of Ultron is killed and replaced by an Oakland orphan who wants to get even for hardship, leaving the hero to stop someone with an almost rational view of the world.

It may devolve into a rubbery CGI fight nearing the end, but the themes Black Panther is trading is are stronger than pretty much every other Oscar nominee.

Read More: What Black Panther Needs To Do To Win An Oscar

One of the few bright spots in the otherwise disheartening Oscar nominations is that a black-and-white, foreign-language Netflix movie is the odds-on favorite to win Best Picture. Alfonso Cuaron has taken the technical brio he's plied in the likes of Children of Men and Gravity and returned to his filmmaking roots with Roma, telling a visually captivating tale of a Mexican housekeeper in 1970s Mexico City that starts off delicately and slowly moves into subtle tragedy.

Like many films that didn't get in the running, Roma is impeccably constructed yet doesn't shout about it. Takes are long because they accentuate the drama, not to show off. The lack of music leaves a visceral soundscape in its wake. The casting of unknowns removes any pretense of ego from the equation, and the backdrop of political upheaval is unsettling in its careful overspill. Many will say you have to see this on the big screen, but it's great in whichever form - just see it.

BlacKkKlansman released in August before any major festivals and so looked like a cursory awards candidate. It's testament to just how raw its message is and how entertainingly Spike Lee delivers it that it's emerged as a proper frontrunner for Oscars. Adam Driver nabbed an Oscar nomination (surely the first of many) but the movie belongs to John David Washington, who gives the so-crazy-it-must-be-true story of a black cop going undercover in the KKK a relatable hook.

The line between bathos and pathos is dominant throughout the script and its careful performances, but that belies a real political charge, perhaps best in a joke about how David Duke wanting to install someone with his values in the White House, something dismissed in the 1970s but all too true in 2019; the final sequence that jumps forward to news footage of Charlottesville is a chilling underlining of the film's message and reminder that this isn't a story of our past.

It'll be a tragedy if BlacKkKlansman loses to reverse Miss Daisy on February 25.

Next: BlacKkKlansman's Ending & What It Really Means