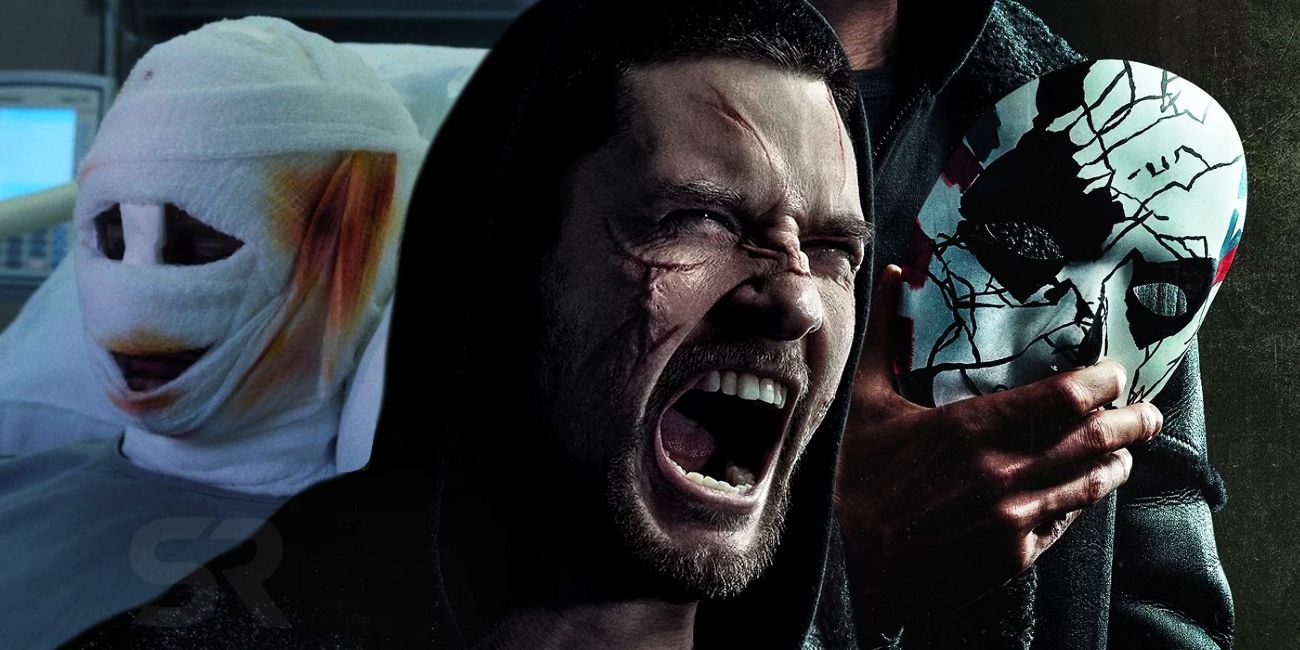 Warning: SPOILERS for The Punisher Season 1

Season 2 of The Punisher has finally come to Netflix, picking up right where Frank Castle left off. But if fans are just as excited to see the damage he left on his old friend Billy Russo a.k.a. Jigsaw... they had better prepare for a disappointment.

To be fair, the main reason that the Netflix version of Jigsaw - the disfigured, twisted Punisher villain - turns out to be such a letdown is because the potential had seemed so high. After the first season's finale left Billy Russo with a destroyed face wrapped in bandages, the comic fans knew that the man who woke up would be a new breed of villain. But when the first images of how broken--or should we say unbroken Billy's face would really be, it didn't take long for fans to compare this version of Jigsaw to the Punisher movie's take, suggesting the Netflix version had chickened out.

Even if the truth behind this take on the villain is more complicated, there's no denying it: the reveal of Punisher's new Jigsaw is one ridiculous letdown.

As we mentioned above, something can't disappoint unless expectations were higher, and in this case they were more than earned. The first season of The Punisher was doing an incredible job of setting up Billy Russo's disfigurement before viewers even knew to look for hints. And where the version of Jigsaw in Punisher: War Zone was less than subtle with Billy's famous good looks, actor Ben Barnes made it an integral part of Billy's identity for the Netflix series - in surprisingly graceful fashion.

RELATED: Why Punisher Will Probably Be Canceled After Season 2

Sure, Billy's good looks contributed to his confidence and charm, leading to the affair that injected him into Frank Castle's mission. But more than that, Billy's exterior reflected the man beneath the skin. His war buddies noted he could be as silent as he was slick and suave, but the lengthy shots of him primping and preening in the mirror made more sense once his origins were revealed. Abandoned by his mother. Abused and broken as a child. And yet even after his black ops tours in Afghanistan, he didn't let a single crack show. Like the titular character of The Picture of Dorian Gray Billy is shown reading, he is untouched, unspoiled, and untainted - all it cost him was his soul.

The Punisher Mangled Billy's Face For a Reason

"When you look at your ugly, mangled face, you're going to remember what you did."

What made both Billy's characterization and disfigurement so satisfying was that it actually worked to make him a character with depth (and not just emphasize his vanity for the sake of losing it). The first season began with Billy claiming that he was lucky to get out of the Marines before he was affected by PTSD like so many of their brothers. But if that seemed like denial, Billy proved himself a master of self-delusion when allowing his best friend and his family to be slaughtered... and never looked back. Well, until Frank Castle decided that it was time for Billy's sins to mark him in a way he couldn't ignore.

Frank's family was everything to him, so he took what Billy valued most: not just his good looks, but the unbreakable veneer of a man who had escaped his life unscathed. And as Frank shot, cut, and eventually drove Billy's face into broken glass, he succeeded in turning him into a monster. Or, perhaps, revealing that he had been one all along, and could no longer hide it from anyone, including himself. The injuries were stomach-turning, but poetic. Unfortunately, the removal of Billy's bandages in Season 2 shows the plan didn't work out as well as Frank, or the viewers, had hoped.

Page 2 of 2: Jigsaw's New Face is a Hilarious Letdown

Before we dive into the real disappointment of seeing 'Jigsaw' reborn, it's worth considering HOW a majority of Billy Russo's face could have even been salvaged after what Frank did to it. Seriously, the final episode of The Punisher's first season leaves Billy such a bloody, gooey, mushy mess, it would've been entirely believable if the next season revealed he had died from blood loss and shock. But no, Frank intentionally chose to keep Billy alive so that he would be forced to see the face of a monster when he dared look in a mirror. Instead, the bandages are removed to unveil... Ben Barnes with a half dozen scars scattered across his face (arguably accentuating his well-formed cheekbones and piercing eyes). A monster? Hardly.

RELATED: Our Review of The Punisher Season 2

Honestly, the marketing images that let the still-better-than-average-looking cat out of the bag are hard to accept without total supension of disbelief. And even assuming that Marvel got Doctor Strange himself to repair Billy's face, it seems that this take on Jigsaw is 'villainous' due as much to his buzzcut and bad boy coat as his lacerated face. A face that, in defense of the most outraged fans, is kind of the signature feature of the comic book villain.

But once fans have gotten in their chuckles, considered the fan art showing what a comic-accurate version of Jigsaw would have looked like, and accepted that The Punisher makeup team dodged a true disfigurement, not all is lost. Is this villain Jigsaw in appearance? Absolutely not, and that's not going to get any less disappointing. But the show did ask fans to look past the polished exterior once before...

Punisher's Jigsaw is Different, But Still a Fake-Out

Years from now the minds behind The Punisher may admit that, were they to do it again, those facial wounds would have been dialed back to make the Season 2 Billy even somewhat plausible. That way, the reveal of their plans for Jigsaw might have been received with curiosity, instead of disappointment, confusion, or jeering. But if fans are going to sit through the entire season, they will be better off engaging with what the showrunners are doing differently. Mainly, staying faithful to the idea that Frank Castle succeeded in shattering Billy's perfect, undamaged life... it's just a lot worse than it looks from the outside.

In a way, it's a compliment to Frank Castle: any lucky bullet could have marred Billy's face, but Frank's rage shattered Billy like only a brother could. This re-imagining may also be more educational when it comes to the show's dedication to portraying veteran life and PTSD faithfully. Actor Ben Barnes has talked about based Jigsaw's mask on actual soldiers dealing with post-traumatic stress disorder, and using a false, broken face to represent that Billy Russo's mind is the real 'Jigsaw' puzzle to be re-assembled (if it even can be). Whether that's a more intellectually stimulating depiction of the classic villain, or one that only softens the disappointment is going to be for the fans to decide.

But who knows, maybe this should be taken as a sign that plastic surgery has been helped by the Avengers, too. Has Wakanda's outreach program filled clinics with vibranium capable of simulating human tissue? Has the experimental knitting of artificial skin that patched up Hawkeye in Age of Ultron now been given to the masses? Or did The Punisher producers choose not to put one of their stars in the makeup chair for five hours each day of shooting? We may never know.