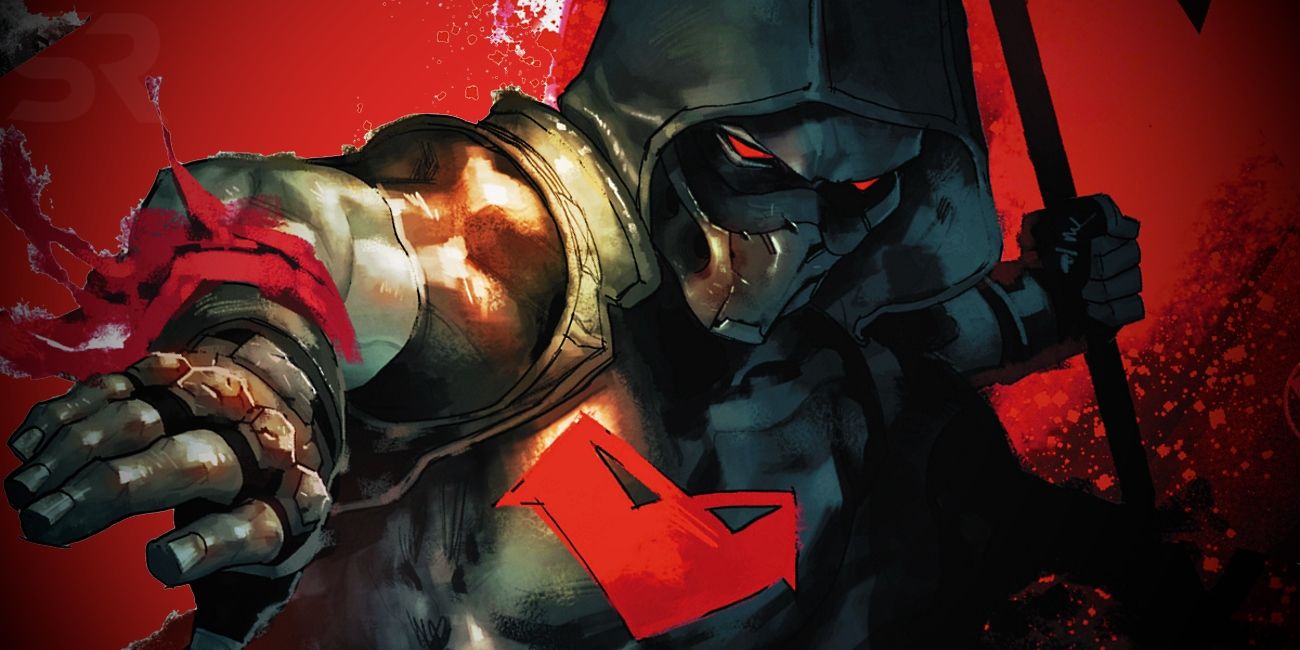 Fans of the Young Justice TV series were happy just to get another season, but now, they just got a major tease that Jason Todd is already transforming into the famous Red Hood in DC's animated universe.

If Batman fans have been waiting to figure out how to watch the new Young Justice, the time has definitely come. Until now the animated series has only alluded to the death of Jason Todd, the second Robin. But in the newest episodes of Young Justice: Outsiders, fans got their first confirmation that Jason is silently playing out his comic book path to Red Hood. Even if the heroes themselves have yet to realize who is behind the mask...

Even if viewers of Young Justice had never heard of Jason Todd, or any other Robin than Dick Grayson or Tim Drake, the show itself gave them all the information needed. In Season 2 of Young Justice the heroes gather in the underground cave serving as a memorial to those Justice League heroes who fell in battle. Among the holograms were Blue Beetle, Aquagirl, and an unnamed, unexplained Robin.

The deceased Robin wasn't hidden, but put front and center. So even if he wasn't explicitly named, DC Comic fans knew exactly who the sidekick was, and could assume the story being implied along with it. The Young Justice version of the memorial to Jason Todd may be different, but his death at the hands of the Joker went without saying. Of course, fans didn't know that the third season of the show would reveal Jason's story AFTER death was also going to be canon, as well.

Now we must jump to season three of the series, which has swapped in new Young Justice heroes and allies (like the season before). But when Tara Markov (known to comics fans as Terra) goes missing, her brother Brion leads his superhuman friends to the League of Shadows' front door. Considering the role played by Ra's al Ghul in the past, it's not a bad selection for a first place to look. But when the heroes arrive on Infinity Island looking for answers, they find only Sensei, the villainous underling of Ra's. Standing at his side is Ubu, the familiar enforcer of the League... and another, mysterious ninja.

The character is never given a name, and is credited only as 'Red Hooded Ninja.' But the show knows exactly how to tease fans of the bodyguard's true identity. So those who wish to remain SPOILER-FREE or see the episode for themselves, stop reading now. But for those who want to know how Young Justice is adapting Jason Todd's rise as Red Hood, read on.

Page 2 of 2: Jason Todd Confirmed as The New Red Hood

The first encounter between the heroes and this trio of villains is over before it begins, meaning some viewers might not even notice the third ninja at all (the makers of Young Justice keep this red hooded katana-wielder to the background, since they know exactly when and where to make their bombshell reveal). Once Nightwing, Superboy, and Black Lightning arrive with more back-up, the real fighting begins. Miss Martian freezes Sensei in mid-air, Black Lightning shocks Ubu's weaponry... and Nightwing takes on this mysterious crimson ninja in hand-to-hand combat personally.

RELATED: Jason Todd's Days as Red Hood Are Over in DC Comics

The reveal still relies on some comic book knowledge to catch, once Ra's al Ghul arrives to put an end to the fighting, and explain that he can't help them find the missing Markov. Having apparently left behind the evil secret society known as The Light, Ra's is following his own plans, and allows the heroes to depart. As he does, the masked and hooded fighter finally speaks, saying only "Gray...Son." The name of Nightwing isn't impossible for him to know, but the response from Ra's is what seals it: "Ahh, your memories are returning... Excellent."

If you're looking to understand how a highly trained assassin could arrive at the side of Ra's al Ghul, beneath a Red Hood, and slowly recalling his memories of the Batman family, that's as explicit a confirmation of Jason Todd's resurrection as you're going to get.

Red Hood's Story is Only Beginning

Since the story of Jason Todd's resurrection as the villain Red Hood has been changed more than once, fans can be forgiven for missing this connection. Especially when the first return of Jason Todd in Batman: Hush was revealed to be an illusion... later made real, but altering exactly how much of his memory Jason retained (along with how much he aged before returning). So without putting the episode's hint too simply, Ra's is clearly alluding to Jason's resurrection via Lazarus Pit - the same magical bath used by Ra's to maintain his immortality. In the comics, that was exactly how Jason was returned to life after being murdered by the Joker... but like all souls restored by the Pit's magic, he was twisted in the process. His body returned to life, but the person occupying it was a wild, possessed thing. Jason eventually began to rebuild himself under the training of both Ra's and Talia al Ghul.

However, his memories were distorted along with the facts, all as part of a larger plan to fashion him into a weapon against Batman. The two eventually came to blows (and more than a few were exchanged between Jason and Nightwing, the Robin he replaced), but in the end Jason remembered his life, his adoption by Bruce Wayne, and eventually turned the Red Hood into a hero of the Batman family.

Will Young Justice: Outsiders repeat that same story in DC's animated universe, as well? Or is the mask and uniform a sign that this version of Jason's will become a different kind of adversary in a red hood? For that, we'll just have to keep watching.