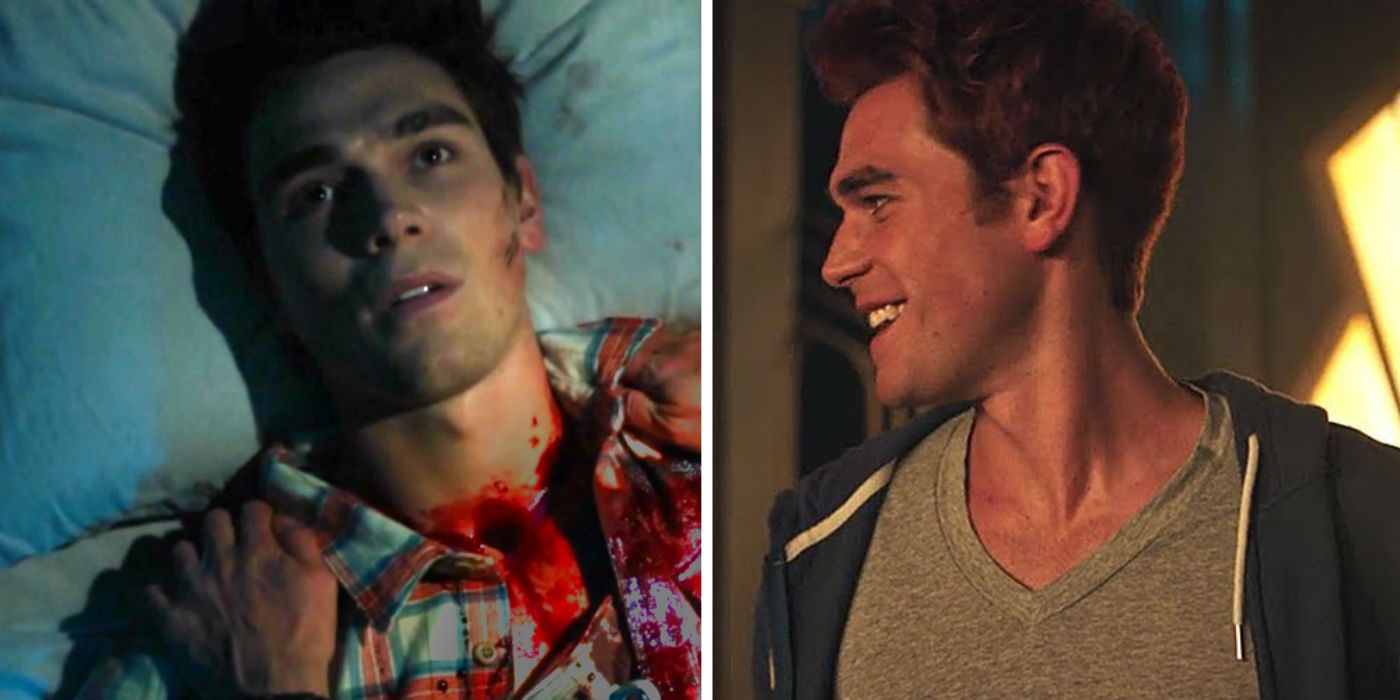 As we predicted last week, the death of Archie Andrews in Riverdale didn't last long. In fact, in terms of screen time, it lasted less than a minute. This week's episode, "The Stranger," opens with the usual dramatic monologue from Jughead in which he proclaims that, "At 8:47 on a Wednesday morning, Archie Andrews died." This is followed by a brief dramatic pause, and then Jughead continues, "At least, the Archie Andrews we knew."

Apparently Archie lying prone on his bed in a pool of blood staring blindly up at the ceiling and not responding to the park rangers when they called his name was just some kind of hilarious prank on his part, because we don't even see him in hospital following the bear attack. In fact, by the time Riverdale's opening title screen appears, the biggest problem in Archie's life is needing to study for his SATs.

The entirely unconvincing Archie-death fake out is emblematic of one of Riverdale's biggest problems: the feeling that nothing that happens in the show really matters, because plot threads are dropped or resolved so easily. For example, another cliffhanger ending earlier this season was Betty discovering Jughead apparently having been brainwashed by Griffins and Gargoyles, playing the game obsessively and spouting Gargoyle King dogma. However, nothing ever really came of it and Jughead seemed more or less back to his normal self by the next episode. The show's short attention span was highlighted in "The Stranger" when Fred Andrews asked his son about "all that time" he had spent living on his own in the woods in Canada... but "all that time" was exactly one episode of the show.

Archie's spirit journey last week that ended in him symbolically killing his own innocence has supposedly transformed him as a person into someone unrecognizable, but even that aspect of Archie's "death" is unimpressive. The fact that the first indication we get of the old Archie having died is the fact that "Dark Archie" drinks root beer floats instead of milkshakes makes it hard to take his transformation seriously, as do the repeated scenes of Archie having PTSD flashbacks - not to the bear attack that we never actually saw, but to a dream he had after the bear attack. The Archie-Veronica break-up towards the end of "The Stranger" isn't anywhere near as impactful as the show seems to think it is, since it's the second time they've broken up this season alone, and they only actually got back together about 30 minutes of screen time prior.

Riverdale's utterly ridiculous plots and incredibly short attention span are, in many ways, part of the show's charm, but it's a charm that's starting to wear thin. To the show's credit, it does seem to be trying to keep the Dark Archie thread going for at least a couple of episodes, and "The Stranger" ends with an indication that Archie has turned to booze and boxing as a way to ease his angst. This being Riverdale, though, it wouldn't be at all surprising if he's back to his old self by the end (or even the start) of next week's episode.