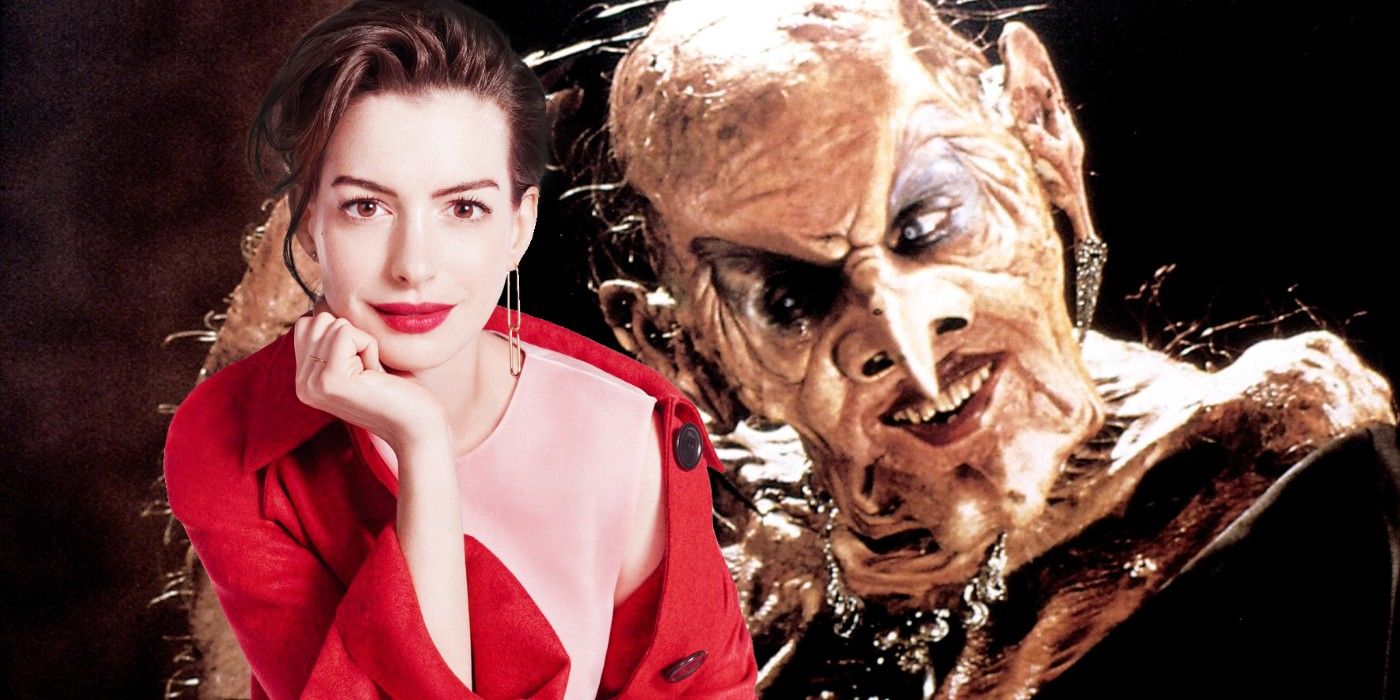 Anne Hathaway is playing the Grand High Witch in Robert Zemeckis' The Witches adaptation. Angelica Huston famously brought the villainous Grand High Witch to life in the late Nicolas Roeg's 1990 adaptation of Roald Dahl's novel, with the assistance of some impressively grotesque prosthetics and makeup. While Roeg's movie bombed at the 1990 box office and was largely disowned by Dahl (who disliked how the film ends on a happier note than his book does), it was generally respected by critics in its day and has since taken on cult status over the last three decades.

Dahl's Witches novel was published in 1983 and tells the story of a young British boy raised by his Norwegian grandmother, a former witch hunter who frequently tells him stories about her encounters with witches over the years. When the pair take a vacation to a fancy English hotel, they end up stumbling upon a witch convention - masquerading as a gathering of the Royal Society for the Prevention of Cruelty to Children - that is presided over by the witches' leader: the Grand High Witch, a terrifying figure who has devised a plan to get rid of all the world's children in one fell swoop.

So far, Zemeckis has confirmed that his Witches adaptation (which he's both writing and directing) will change the story's setting to the Gothic South and have distinct sociological overtones. While it remains to be seen how else his interpretation differs from Dahl's book and Roeg's movie alike, it appears the filmmaker has found his Grand High Witch. Variety reports that Hathaway has closed a deal to play the villain, having now worked out a potential scheduling conflict with her role in Warner Bros.' upcoming Sesame Street movie.

As delightfully freakish as Huston is as the Grand High Witch, it'll be fun to watch Hathaway put her own spin on the character - a villain who, like the other witches in Dahl's book, has a bald head, clawed fingers, square-end feet, and despises children like there's no tomorrow. Hathaway has rarely (if ever) gotten to play a character who's quite as whimsically evil and nasty as the Grand High Witch before, which should make it all the more entertaining to see what the Oscar-winner does in the role. If all goes well, she will - gently - traumatize a whole new generation of children, much like Huston did before her.

On the other hand, Hathaway's casting may only go so far to assure those who are wary of this new adaptation. Zemeckis, for his part, is coming off an ambitious (and costly) misfire with Welcome to Marwen and has made some worthwhile live-action films in recent years, but nothing really groundbreaking by the Back to the Future director's standards. While the Gothic South setting and reports that Zemeckis' The Witches will feature a pair of black leads are intriguing, people are also concerned that the storyteller with resort to cliches and stereotypes in his portrayal of the South (as some felt he did with Forrest Gump in particular). Still, it'll be interesting to see how this one turns out, at the end of the day.

MORE: Every Unmade Guillermo del Toro Movie (& Why They Were Canceled)