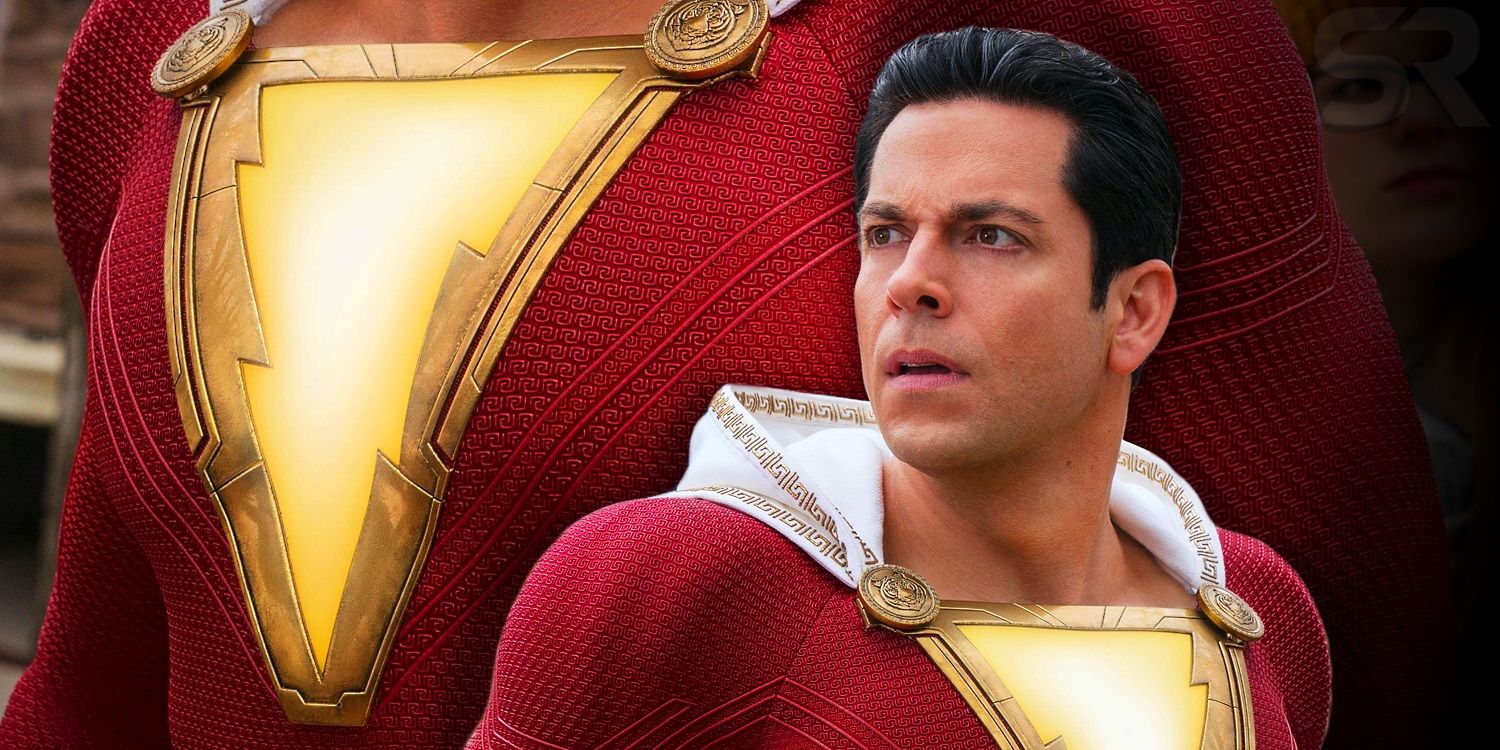 If comic book fans thought a new Superman suit could be controversial, they weren't prepared for Shazam! The costume worn by star Zachary Levi had an unceremonious reveal thanks to Shazam! set photos, but now the movie's costume designer is finally offering an up-close and detailed breakdown of every decision.

Long before the Shazam movie costume was officially revealed, Screen Rant got the chance to visit the set of the film in Toronto. During our visit, we got to see the star superhero's uniform in person along with Costume Designer Leah Butler, who offered detailed explanations of the colors, designs, technology, and mythology behind every feature. Now, we're finally able to share those details with our readers--and trust us, none of them happened by accident. In fact, the most complicated parts may be the last ones fans would expect.

By now fans who have watched the Shazam! trailers know that the lightning bolt motif comes directly from The Wizard, passed on to Billy Batson along with his powers. And while The Wizard is heavily based on the New 52 version (along with most of the Rock of Eternity set), the inspirations for Shazam's suit are different. And to explain how different, Butler (Annabelle: Creation) began her breakdown by reading the description from which she and director David F. Sandberg developed the look of the suit. Starting with the color, the Shazam suit calls directly back to the heroes and demigods of Greek and Roman legend:

I'm going to read something that when I first started, David and I were talking about the costume... I hope I don't bore you, but here we go... "Mythological symbols and icons will be utilized in his designs along with elements from the past that feel real and not streamlined... Red is often the most intense color emotionally in the spectrum. The Greeks began using blood red as a pigment in ancient Rome. In Ancient Greece, gold was a metal that was precious to the gods, to the extent that they were dressed in gold. Precious gold, the color, the luster of the gold continues to be associated with the sun and the sacred masculine. Approach to costume is also born from organic elements, and will feel sacred and true as opposed to machine like, severe, or manufactured. This design will be approached with these basics is in mind.”

The pattern on [the suit fabric] is also taken from Greek and Roman, like a Greek key pattern that we did, it's the pattern that we did on top of the fabrication. There are two different sizes of it and all these design lines here are as well... which gives this a really nice, dynamic look. It's 3D. As you can see, there's also that sort of Greek key pattern as well on the cape. That as well was printed. He has everything from gauntlets to belts to what we like to call, 'the bolt.'

For what it's worth, seeing the suit out of direct sunlight certainly placed it more at home among the existing DC movie costumes than those first set photos implied. The Greek key pattern Butler mentions is hard to make out at a distance, but just like the interlocking rings of the Man of Steel suit, add a clear texture and depth. The same goes for the larger variations, highlighting the muscles of the chest, shoulders, and arms. Of course, most people will be too distracted by "the bolt" to notice anything else.

The lightning bolt emblazoned on Shazam's chest is without a doubt the most intriguing aspect, and we're willing to bet will play a larger role than fans expect. Typically, the lightning is a design element, and not much else. A logo, first and foremost--and in the New 52, an occasional hint at the living lightning fueling Billy from within. The movie version, however, sounds like it is built with some unforgettable shots in mind... and is able to react to the action, as well:

The bolt obviously lights up. We wanted to have some practical lighting on the face, because he is going be lit up during the movie. The director and the DP really wanted to do some shadows and really see some actual practical light. We took the lighting elements, which there are indeed quite a bit of, and incorporated it into this shape here so it would be able to go right in between the pecs. It's a very thin lighting element that is adjustable. It goes up and down... we're able to adjust the temperature of the light and how visual it is while we're shooting.

There we go [the bolt slowly brightens to an almost blinding white level]. Quite bright. I'm not going to blind you all, but as you can see we were able to really come up with a great technology. And luckily enough, the stunt guy and Zac have actually not broken one yet. I can’t believe it. David came up to us when we were designing the costume and said, 'It would be really cool if the gauntlets lit up too, do you think you could do that?' 'Yeah, sure, why not?' Okay. So, I got to do another lighting element there. That's how the lit gauntlets came about.

After seeing just how blindingly bright the bolt could get, we asked Butler if the effect was designed to practically light Zachary Levi's face or practically communicate Shazam's power on screen. Her response - "Both. Very much both." - raised our hopes further. But as it turns out, it may be the impeccably-white hood and the potentially plot-hole-creating boots that turn out to be the most controversial among costume-minded fans. And yes, they did try to make sandals work...

We could spend a lot of time explaining the misconceptions surrounding the Golden Age, Post-Crisis, and New 52 looks of Shazam (or 'Captain Marvel,' originally). But the truth is it's impossible to point to just one version of the suit, or its lightning bolt that the movie is based on. The closest version may even be the animated variant created for the DC movie Justice League: War. But as director David F. Sandberg points out, there's at least ONE part that calls directly back to the Geoff Johns comic the origin story is following:

I wanted to incorporate a little bit of everything [into the movie], not just the New 52, but the older stuff as well... The suit is one part of that where it's like, 'Yeah, I want the shorter cape of like the Golden Age comics.' But then, 'Let's try the hood from the New 52.' And little things like that, and trying to balance it.

The result seems to be just what was aimed for: a hero who looks the part, but is somehow more... old-fashioned than a modern Superman or Batman. And for those wondering how the Shazam! cape compares to those other Justice Leaguers, we'll let Butler explain why they're usually CG--and anything but white:

I will say too, that the length of the cape is shorter, maybe, than your traditional Superman. And it was very pleasing actually, that he has this kind of fun length to the cape, which shows a lot of movement and action and just has a sort of more useful, light feel to it... It's wool. And we went through--again with the research. So many different fabrics. What is gonna look good? What is gonna hold? What is going to move? And we landed on this really beautiful wool... the handy-dandy buttons actually screw in, and hold in the cape to the elements.

The textures and mythical inspiration of the Shazam! movie costume were difficult to know just from a set photo or two, but one thing fans did notice was the animal embedded in the suit. The large buttons that hold Shazam's cloak to his shoulders in the comics are simple, polished gold. But the movie version shows the clear depiction of a tiger's head--an overt reference to 'Talky Tawny,' the anthropomorphic tiger (then an actual tiger in the New 52) who remains a favorite among Shazam fans. The Easter Egg is intentional, but Butler reveals the happy coincidence of its creation:

That came about because we started going through history, and different genres, and symbolism. I was thinking of lions, and something strong, and I actually worked with a [comic fans] he said, 'Mr. Tawny!' And I said, 'That's a great idea! That must be how Mr. Tawny ended up in ours.'

At last, we arrive at the boots. The part of every superhero costume that wardrobe creators must make comfortable, durable, and immaculate... before spending most of the time cut out of the frame. Still, Butler's team had their work cut out for them, creating a golden boot that looked more classical than science fiction. In the end, it seems that the boots we saw on set--the same ones being worn in the first official Shazam! photo, from the first days on set--were ultimately changed. The panels of red fabric were replaced by a solid gold, but from the sound of it, Butler's team never stopped trying to master the design.

Let me just tell you, that we had a pair of sandals to start off with--very New 52--and it didn't work. So we needed to come up with something a bit meatier and we were talking about, you know, kind of working through things, that was one thing we definitely worked through. He has so much action, too, and we wanted the design lines to really follow through with the other elements within the costume itself. Design lines are from the bolt, the belt, and the gauntlet, and as you can see we even pull in the fabric. [The sandal design] was going to be sort of a one piece sort of thing, with a bit of the fabrication almost in it.

We even looked at perhaps doing it attached like Superman's, but ended up going in this other direction. Zac, luckily, feels quite comfortable in these I think for the most part. And they're pretty functional for him too.