Star Trek: Discovery: Everything That Happened Between Seasons 1 & 2 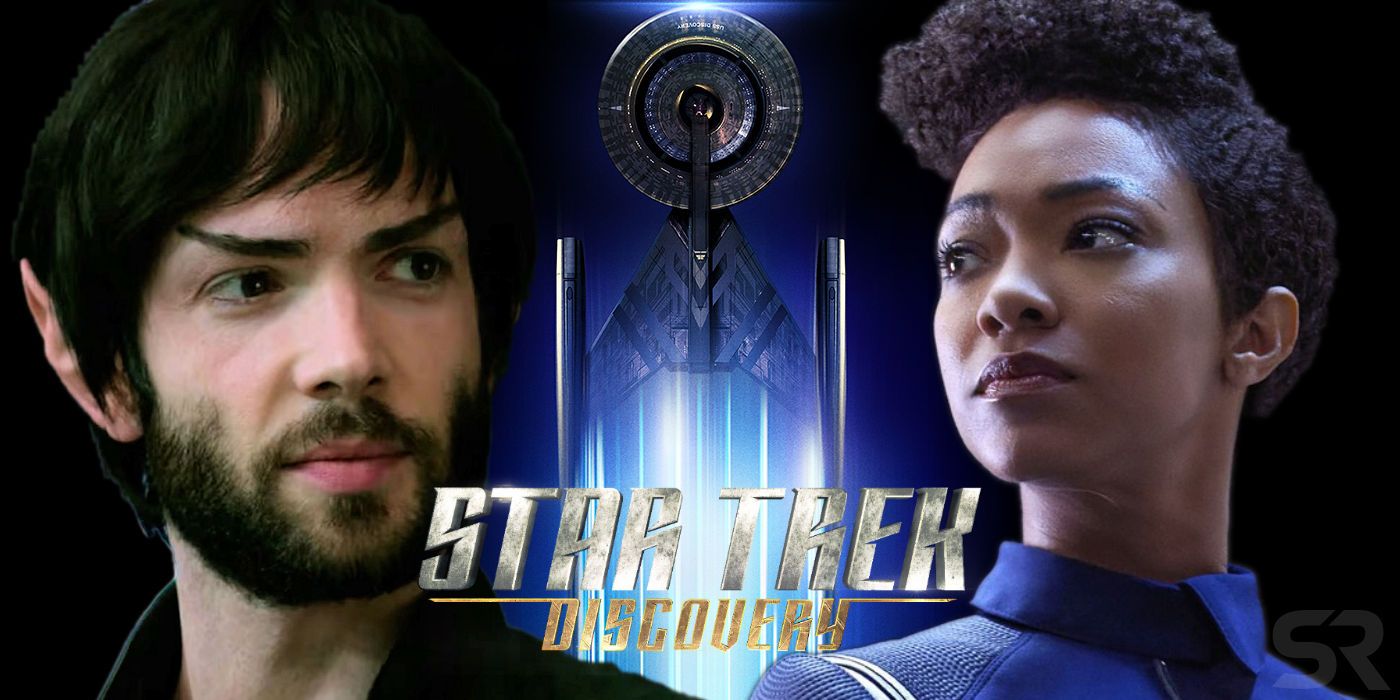 Star Trek: Discovery season 2 picks up immediately after the monumental season 1 cliffhanger where the Discovery met the iconic Starship Enterprise, but here's what else has happened in Star Trek Discovery's canon in between seasons 1 and 2.

CBS All-Access' flagship series is a prequel set a decade before the five-year mission of the Enterprise under the command of Captain James T. Kirk (William Shatner). Star Trek: Discovery infuriated hardcore fans who felt the series was missing Star Trek's spirit of exploration. Instead, the series was about a heretofore unknown war with the reimagined Klingons that was started by Commander Michael Burnham (Sonequa Martin-Green), who got her captain Phillipa Georgiou (Michelle Yeoh) killed and earned infamy as Starfleet's first mutineer. After her court-martial, Burnham unwillingly found herself aboard the U.S.S. Discovery commanded by Captain Gabriel Lorca (Jason Isaacs), who had the mandate to defeat the Klingons but was hiding a shocking secret. As the Discovery tried to find a way to win the war, Burnham embarked on her personal quest for redemption.

The overall arc of Star Trek: Discovery season 1 was the Klingon War, which was fought with the help of the Discovery's experimental spore displacement hub drive. However, that very same advanced tech sent the starship into the Mirror Universe where Burnham and the crew discovered Lorca was an imposter - he was the Mirror version of Lorca posing as the Discovery's captain. In the Mirror Universe, Burnham also met the Terran Emperor, the doppelganger of Phillipa Georgiou, who Lorca was trying to depose. After defeating Lorca, the Discovery jumped back home to the regular universe - with the now ex-Emperor Georgiou aboard. Finally, the crew of the Discovery found a way to end the Klingon War by installing L'Rell (Mary Chieffo) as the new Klingon High Chancellor. Rewarded for saving the Earth by having her rank returned to her, Burnham reaffirmed Starfleet's ideals and the Discovery returned to their mission of exploration - before receiving a priority one distress call from the U.S.S. Enterprise in a shocking end to the season.

Star Trek: Discovery season 2 promises to bring iconic Trek characters into the series, most prominently Spock (Ethan Peck). The famed Vulcan is the adoptive brother of Michael Burnham, who was raised by their father Ambassador Sarek (James Frain) on Vulcan. Spock was teased throughout season 1 but the new episodes will explore their shared past and their complex relationship. Also joining Star Trek: Discovery season 2 is Christopher Pike (Anson Mount), Kirk's predecessor as Captain of the Enterprise. While season 2 begins immediately after season 1's point of conclusion, there were other significant happenings in Discovery's universe and also behind the scenes that set the stage for what fans can expect from Star Trek: Discovery season 2:

What Happened Behind The Scenes Between Seasons 1 & 2

Star Trek: Discovery has had anything but a smooth ride behind the scenes. Original showrunner Bryan Fuller (Pushing Daisies) clashed with CBS over the series' scheduling, budget, and overall creative direction (Fuller wanted Star Trek: Discovery to be an anthology show with each season set in a different time period of Trek history; CBS disagreed). After Fuller left Star Trek: Discovery, Aaron Harberts and Gretchen Berg became the showrunners of the series' divisive first season. However, charges of creating an abusive workplace environment saw Berg and Harberts ousted and replaced by Alex Kurtzman early in Star Trek: Discovery season 2's production.

The veteran producer and director who also co-wrote J.J. Abrams' rebooted Star Trek and Star Trek Into Darkness films, Kurtzman now oversees the entire Trek franchise for CBS All-Access with an eye on expanding the brand. Last year, it was announced that Patrick Stewart will reprise his role as Jean-Luc Picard in a new series which will air late in 2019. In addition, Kurtzman is overseeing new animated Trek series starting with Lower Decks by the masterminds behind Rick and Morty. However, Kurtzman's main focus is Star Trek: Discovery, Trek's flagship series, though he also ushered in Short Treks, the mini-episodes set in the Discovery canon that air on CBS All-Access which could also impact the events of season 2.

Mirror Georgiou Was Recruited Into Section 31

Star Trek: Discovery season 1 ended with the Mirror Georgiou loose in the prime universe's Alpha Quadrant. After Burnham brought her aboard the Discovery, Georgiou met Sarek and Vice Admiral Katrina Cornwell (Jayne Brook) with a diabolical offer to help Starfleet win the Klingon War: the former Emperor planned to commit genocide by destroying the Klingon homeworld Qo'noS. However, Burnham uncovered and stopped Georgiou's scheme but instead of incarcerating the doppelganger of her mentor, Burnham allowed Georgiou to go off and find her own way.

A bonus scene released soon after Star Trek: Discovery's season 1 finale revealed that Georgiou was recruited into Section 31. The former Emperor has a taste for the sordid debauchery of Qo'noS' and decided to open her own cabaret, which is where she was found by Leland, a Trill who works for the Federation's secret black-ops agency. It's no surprise Section 31 would be interested in Georgiou, a stranded conqueror from a parallel universe who possesses intimate, first-hand knowledge of how to defeat the multitudes of alien races hostile to the Federation. Both Leland and Georgiou are set to appear in Star Trek: Discovery season 2 and fans can only imagine the chaos the ex-Emperor will sow in the Alpha Quadrant now that she's a secret agent privy to the Federation's darkest secrets.

The Short Trek mini-episodes that aired on CBS All-Access are set in various points of Star Trek: Discovery's timeline, but two of them could have significance to season 2. The first Short Trek, "Runaway," is about Star Trek: Discovery's lovable Ensign Sylvia Tilly (Mary Wiseman). For her tireless and heroic efforts throughout season 1, Tilly - who learned her Mirror Universe counterpart was already a captain - was accepted into Starfleet's command training program in the season finale "Will You Take My Hand?" One day, Tilly might command a starship of her own, but in "Runaway," she deals with an alien stowaway aboard the Discovery. After befriending the alien, Tilly learns she is a Xahean teenager named Me Hani Ika Hali Ka Po (Po for short), who has escaped her homeworld.

However, Po is revealed to actually be the queen of Xahea and that her planet has discovered a way to recrystallize dilithium, the power source of every starship's warp drive. When Po decides to return to her planet, she gifts Tilly with a dilithium crystal. Now, while this revelation could be another instance of Star Trek: Discovery violating Trek canon since Spock and Scotty won't discover the means to recrystallize dilithium until Star Trek IV: The Voyage Home, it could have a bearing on the events of season 2. The Alpha Quadrant is still reeling from the destructive Klingon War and the warrior race regularly targeted planets where dilithium crystals were mined, trying to control the invaluable power source. "Runaway" could signal that dilithium might play a key role in the events of Star Trek: Discovery season 2 and Tilly now owns a newly crystalized fragment.

The fourth Short Trek, "The Escape Artist," focuses on another diabolical scheme of con man Harry Mudd (Rainn Wilson), who was last seen in the eighth (and arguably the best) episode of Star Trek: Discovery season 1, "Magic To Make The Sanest Man Go Mad". After being left in a Klingon prison by Captain Lorca and Ash Tyler (Shazad Latif), Mudd attacked the Discovery by trapping her crew in a time loop which led to the destruction of the starship dozens of times. After finally outsmarting Mudd, Burnham, Tilly, Paul Stamets (Anthony Rapp), and Lorca turned the wily con man over to his estranged wife Stella (Katherine Barrell) and her crime lord father Baron Grimes (Peter MacNeill).

"The Escape Artist" revealed that the intergalactic charlatan escaped his family once more but was captured by a Tellarite bounty hunter named Tevin Kritt (Harry Judge). As Mudd recalled several other instances where Klingons, Orions, and other aliens had him in compromising positions, Kritt turned his quarry over to the Federation starship U.S.S. De Milo. However, Kritt received an unpleasant surprise: the Harry Mudd he captured was a robot, one of dozens of replicas Mudd had constructed to mislead anyone out to collect the price on his head. The revelation of a multitude of Harry Mudd robots may come into play if Wilson reprises his role in Star Trek: Discovery season 2 - and it could also mean fans might never be sure if they're seeing the real Harry Mudd from here on out.

More: Is Star Trek: Discovery Any Good? Yes, It's Incredible