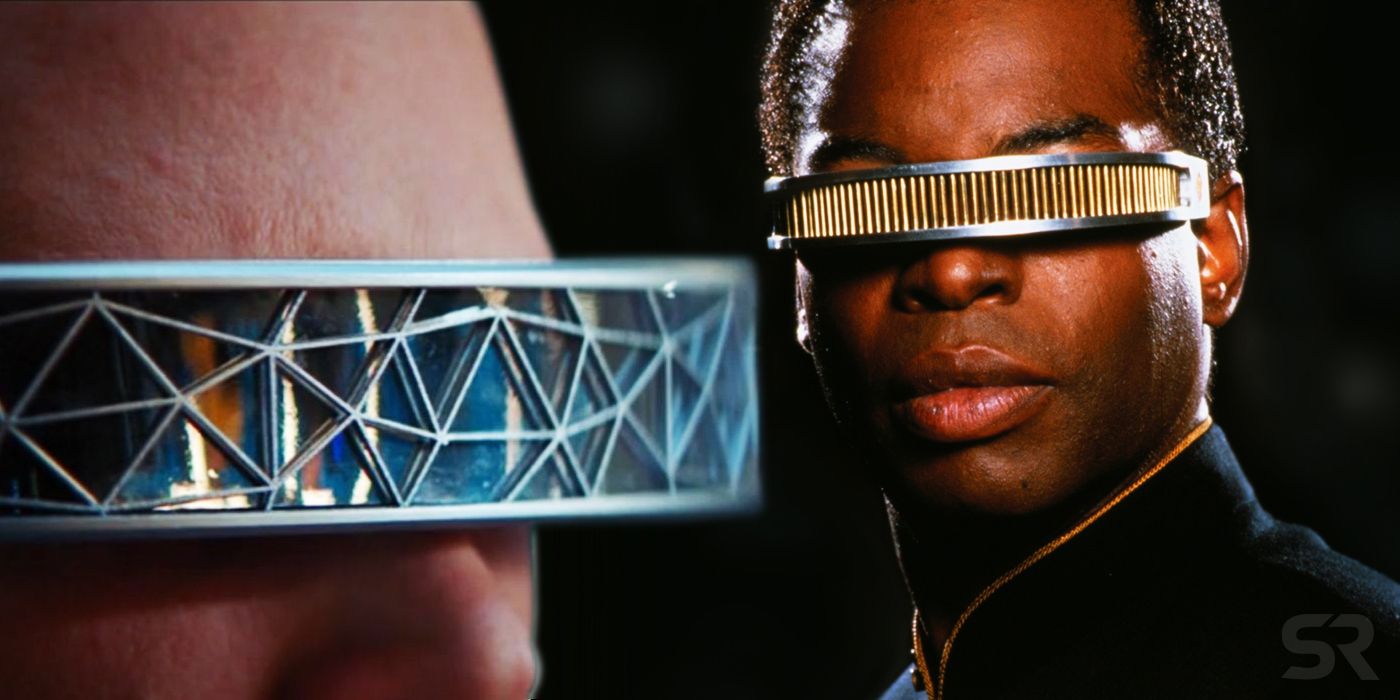 Star Trek: Discovery's season 2 premiere dropped a Star Trek: The Next Generation Easter egg: an early version of the VISOR made famous by being worn by Geordi La Forge (LeVar Burton).

The VISOR, an acronym for Visual Instrument and Sensory Organ Replacement, is an iconic piece of Star Trek: The Next Generation tech. The VISOR is a medical device used to aid patients who were born blind or suffered the loss of eyesight. It allows the wearer to "see" by detecting electromagnetic signals across the entire EM spectrum. The wearer receives a very different type of visual acuity when compared to normal eyesight; the VISOR lets the wearer see in infrared and ultraviolet ranges. The VISOR can also detect heart rate and body temperature as well as determine if a person is lying by tracking their perspiration. In addition, when Geordi was kidnapped by Lursa and B'etor in Star Trek Generations, the Klingon sisters were able to tap into the VISOR with a video feed and see through it, which allowed them to see the codes to the Enterprise-D's defense shields.

In "Brother," Star Trek: Discovery's season 2 premiere, a VISOR is worn by the Discovery's unnamed transporter operator when Acting Captain Saru (Doug Jones) and Commander Michael Burnham (Sonequa Martin-Green) arrived in the Transporter Room to welcome Captain Christopher Pike (Anson Mount). However, unlike the single-piece VISOR Commander La Forge wore on the Enterprise-D, the VISOR worn by the transporter operator included a headpiece that wraps around his head. It's not clear if the headpiece is a necessary component of the early-era VISOR or a cybernetic attachment needed by that particular Starfleet Officer (other crew members like Discovery's helmsman Keyla Detmer also wear cybernetic implants). Still, there's no mistaking the unique eyewear as a precursor to Geordi's famed VISOR.

Geordi La Forge's VISOR is an iconic calling card of that beloved Next Gen character. Geordi was born blind and received his first VISOR after his fifth birthday. Geordi would wear his VISOR all throughout the seven seasons of The Next Generation and in their first feature film, Star Trek Generations. Before he was promoted to Chief Engineer in season 2, Geordi was the original pilot of the U.S.S. Enterprise-D; Star Trek creator Gene Roddenberry intended it to be poetic that the starship was piloted by a blind man.

Perhaps it was the incident with the Klingon sisters managing to take control of the VISOR that prompted Geordi to finally undergo surgery to remove the VISOR and switch to ocular implants, which he would wear in the next three films, Star Trek: First Contact, Star Trek Insurrection, and Star Trek: Nemesis. Geordi was also wearing ocular implants in the future era Q (John de Lancie) showed Captain Jean Luc-Picard in the TNG series finale "All Good Things".

Star Trek: Discovery season 2 is set 107 years before the start of Star Trek: The Next Generation in 2364 and many fans have taken the CBS All-Access series to task for breaking Trek canon and displaying technology that shouldn't be readily available in the 23rd century like the spore displacement hub drive. However, despite being first seen in TNG when it was worn by Geordi La Forge, the VISOR appearing in 2257 doesn't pose any real problems. There's no established history in the TV series or movies of when the VISOR was invented; therefore it's now canon that the VISOR existed during the 23rd century and was worn by at least one Starfleet Officer on Star Trek: Discovery.

Star Trek: Discovery streams on Thursdays @ 8:30pm on CBS All-Access and the next day internationally on Netflix.